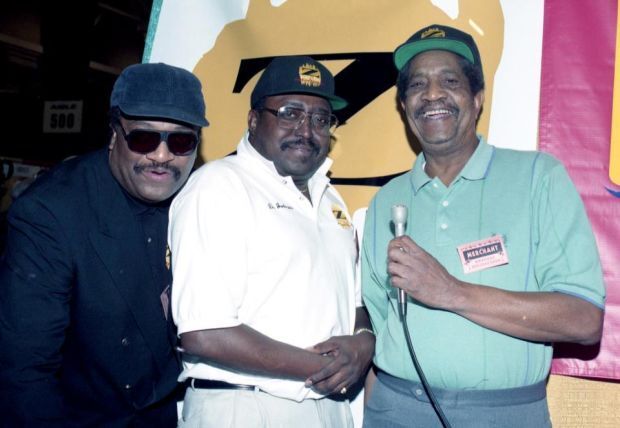 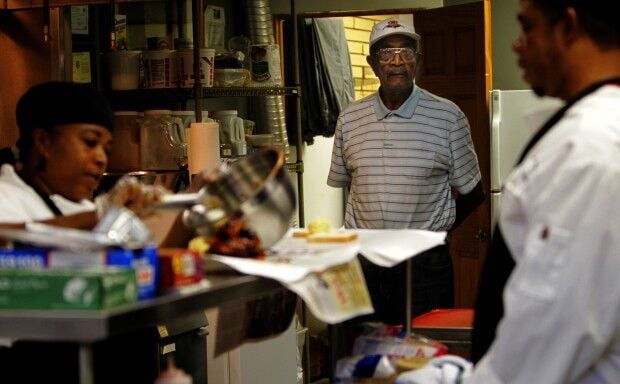 Retired radio personality Lou "Fatha" Thimes, center, watches over employees Versebie Williams (left) and Russell Turner as they fill an order at his new restaurant in St. Louis on Oct. 7, 2011. Thimes opened the Lou "Fatha" Thimes BBQ Pork House he dreamed up with youngest daughter Patrice Thimes in late June, more than three months after her death from a stray bullet. Photo by Laurie Skrivan, lskrivan@post-dispatch.com

Lou “Fatha” Thimes was a legend on St. Louis radio. He had a devoted audience of African-American listeners and a crossover of other fans who tuned in to hear him play rhythm and blues during his on-air heyday, from the late 1950s through the late 1970s.

And he had one of the most recognizable voices in town.

None of that kept him from getting fired on more than one occasion.

The owner of the radio station where he worked at the time once sent a cabdriver to the Thimes home with this message: “You’re fired.”

That happened at Christmastime, recalled a daughter, Denise Thimes of St. Louis. She grew up to hear her father play her recordings — she became a jazz diva and one of the area’s best known singers.

Mr. Thimes was a star, but radio was fickle. He remained on the air for more than 50 years, moving when necessary from one station to another. One thing he didn’t do: quit his day job at City Hall.

He taught his children how to deal with life’s problems: “When one door closes, another opens.”

Mr. Thimes died Wednesday (June 11, 2014) at St. Mary’s Rehabilitation Hospital in Richmond Heights from emphysema and congestive heart failure, his family said Thursday. He was 85 and lived in St. Louis.

As in “Father Time,” but he dropped the “er” from father. Personalities ruled radio in those days, and a good nickname was a key to success.

As for his voice, it was unmistakable. It was strong, like his character on the radio. He could be commanding and larger than life. “Don’t make me use my radio voice on you,” he sometimes warned his children.

He had fan clubs across the state and admirers who drove to St. Louis to hear his broadcasts. He would play records in between his own routines.

“Believe the ‘Lou’ when he tells you,” was a favorite line. He’d stop the music and say: “Fatha, Fatha, Fatha.” He said it three times. “Don’t pour no water over me, just let me burn.” Once a week he sang “Happy Birthday” to all those who were celebrating theirs.

He was the Jackie Gleason of radio with his routines. He’d also let people know where civil rights meetings were being held and where the food lines were. He’d tell them what was happening in their communities and which recording artists were coming to town.

“He provided information that people needed,” said Bernie Hayes, a professor at Webster University and a historian of African-American history and music. “And he provided entertainment to lift them.”

As for his ability to draw crossover audiences, Hayes noted that Mr. Thimes was known as a blues deejay. “But he transcended the blues. He played popular music — and everyone loves popular music.”

Mr. Thimes’ radio act drew from his beginnings on the comedy circuit, as part of the duo “Lou and Blue.” He traveled the country working at black clubs. His comedy and radio shows got him noticed, and he was flown to Hollywood for a tryout on Red Foxx’s 1970s sitcom “Sanford and Son.”

Recording companies knew Mr. Thimes could make their records into hits. He became friends with Chuck Berry, Aretha Franklin and Marvin Gaye, among others.

His distinctive voice got him a job as the first African-American announcer for boxing at Kiel Auditorium.

Mr. Thimes appeared on radio stations KADI, KXLW, KKSS, KMJM and WESL. His longest run was on KATZ, a powerhouse station during the 1960s. His last regular on-air stint was at KDHX during the early 2000s.

Louie Edward Thimes was born Oct. 18, 1928. He grew up on Stoddard Street near Jefferson Avenue. His father died when he was 9. He graduated from Washington Technical School and attended Lincoln University for two years.

He joined the Army and got his start on the Radio of the Americas while stationed in Japan. He wanted to be a comedian but found his niche in radio.

Denise Thimes described her father’s voice and his style on the radio as a “gift” — one that women in particular appreciated.

“Women would go crazy,” she said. “The phones would be jumping off the hook. There were many children produced when my father was on the radio.”

Survivors include a son, Lou Thimes Jr. of St. Louis; two other daughters, Deborah Thimes and Kelle Thimes, both of St. Louis; about 12 grandchildren; and about 15 great-grandchildren. His wife, Mildred Thimes, died in 1997. Three children also preceded him in death: Patrice Thimes, Reginald Thimes and Edrick Thimes.

in this Sunday's edition of the St. Louis Post- Dispatch, we reveal the winners of our father-and-look alike contest, take you to a show in Fo…

Retired radio personality Lou "Fatha" Thimes, center, watches over employees Versebie Williams (left) and Russell Turner as they fill an order at his new restaurant in St. Louis on Oct. 7, 2011. Thimes opened the Lou "Fatha" Thimes BBQ Pork House he dreamed up with youngest daughter Patrice Thimes in late June, more than three months after her death from a stray bullet. Photo by Laurie Skrivan, lskrivan@post-dispatch.com