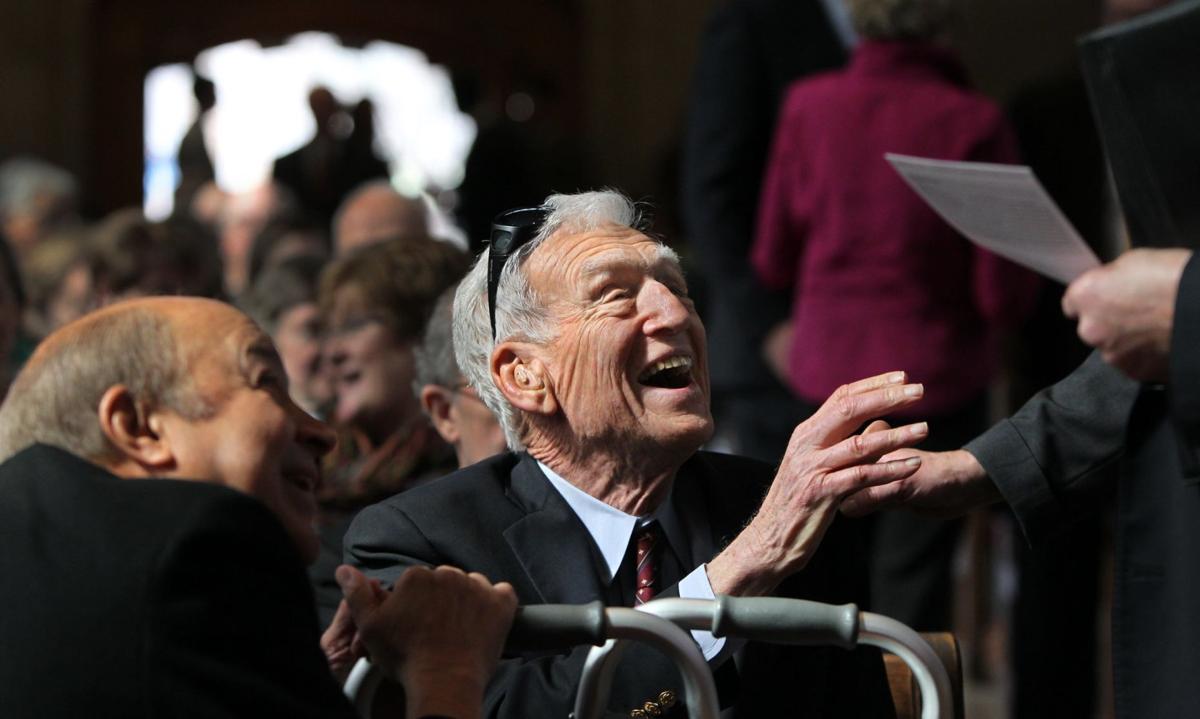 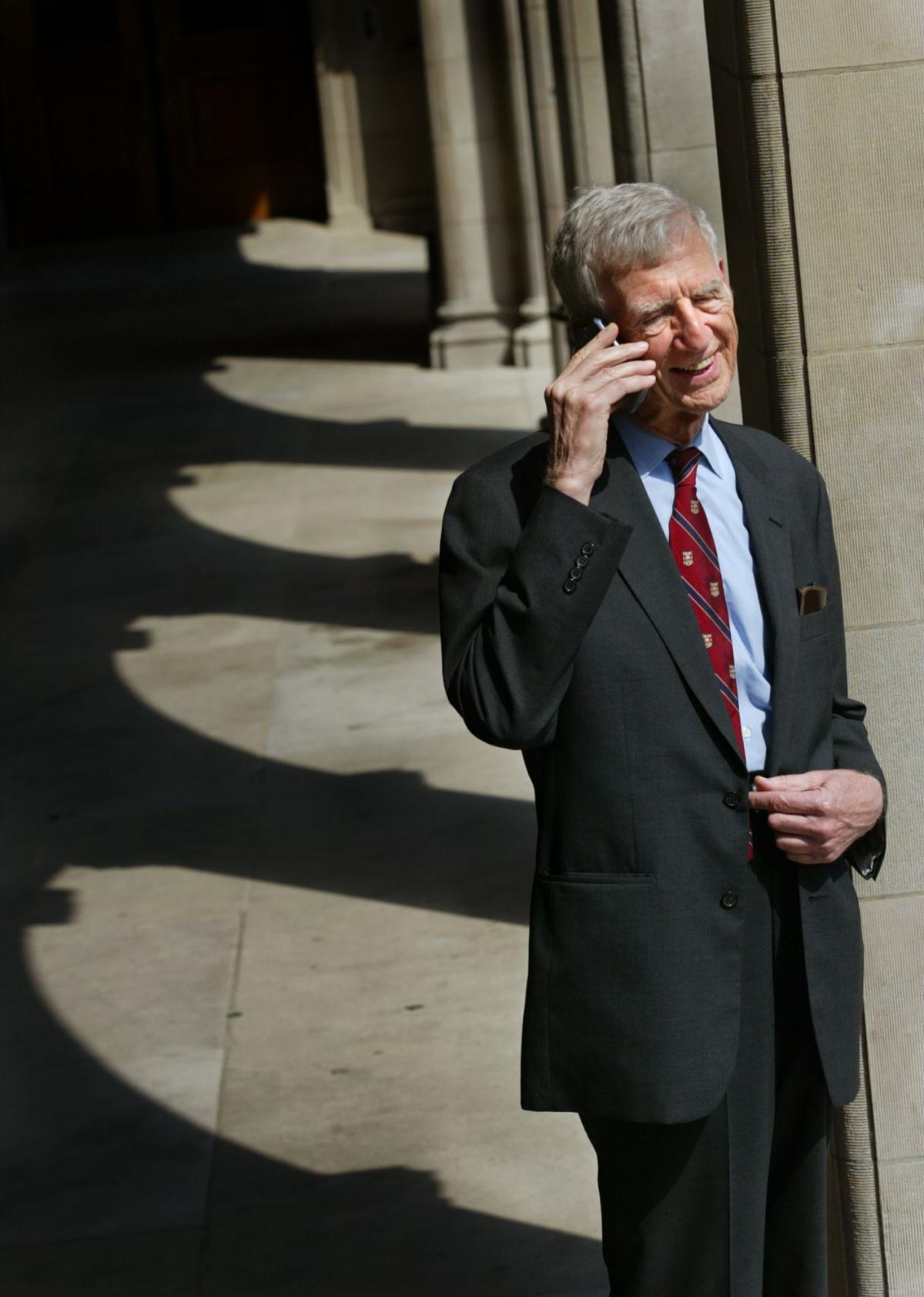 THURSDAY 14 SEPT 2006 - Former Washington University Chancellor Dr. Bill Danforth is photographed Thursday at the Hilltop Campus, due to be renamed the Danforth Campus in a dedication ceremony this Sunday. Robert Cohen | Post-Dispatch 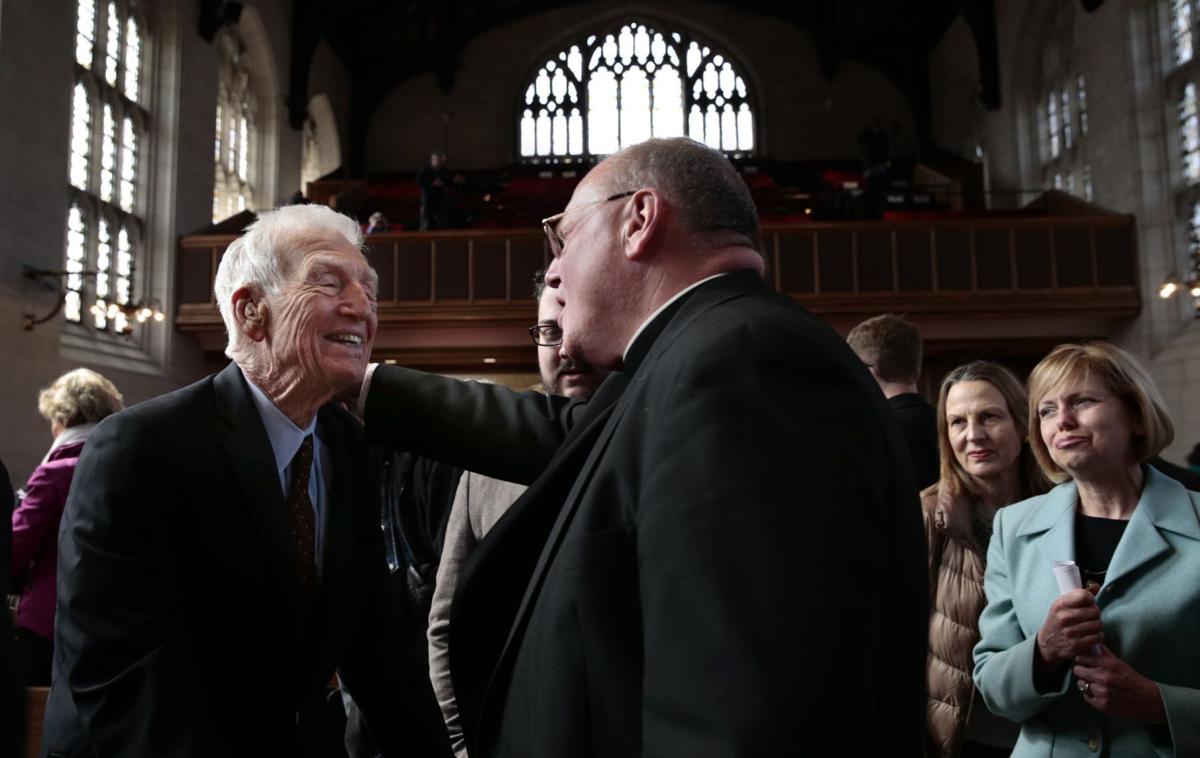 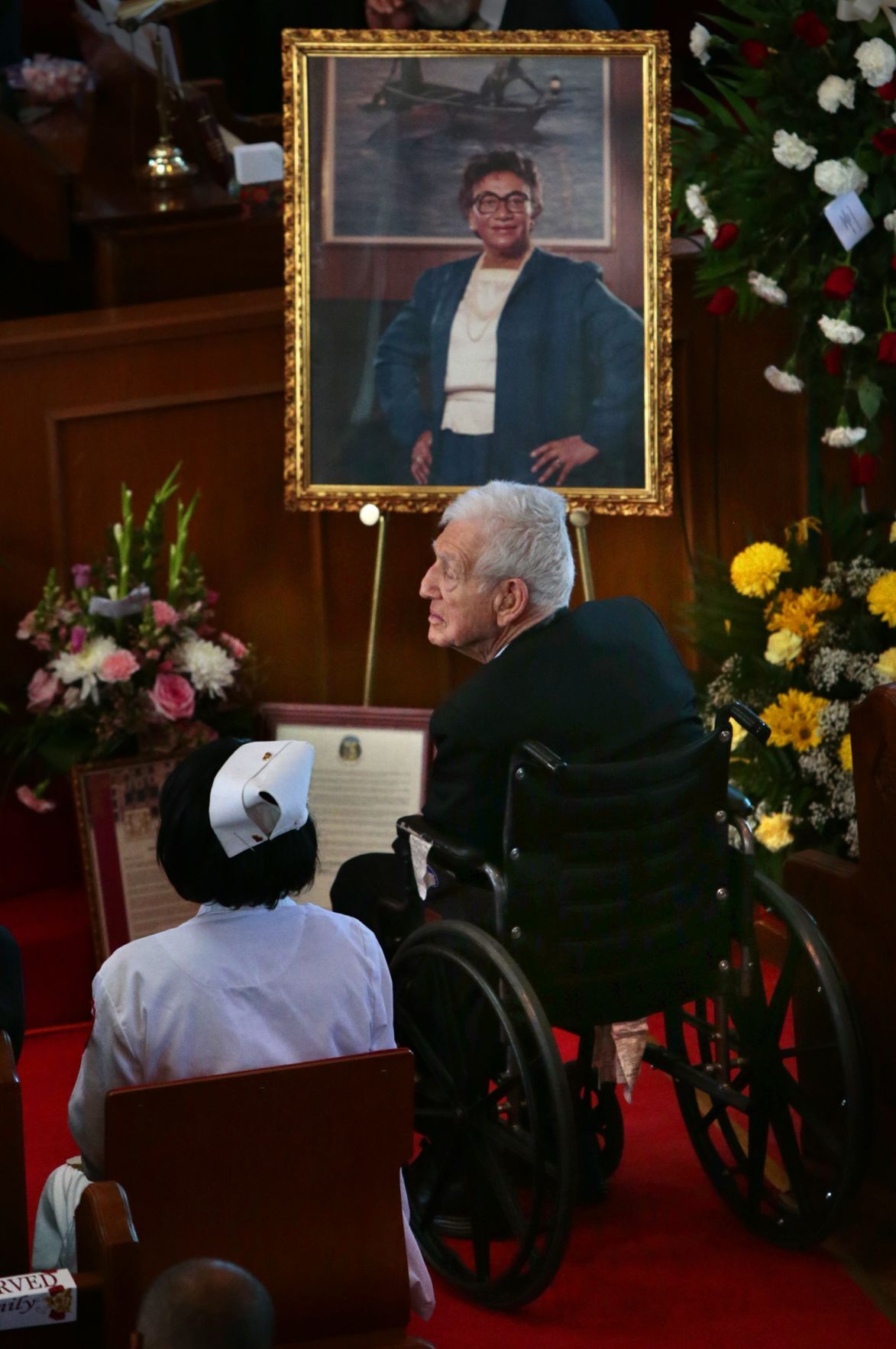 Dr. William H. Danforth, the man many credit with transforming Washington University from a streetcar campus to a world-class institution, died Wednesday (Sept. 16, 2020) at his home in Ladue. He was 94.

A scion of one of St. Louis’ preeminent families, Dr. Danforth rejected a career at Ralston Purina, the firm founded by his grandfather, in favor of medicine. But, at the age of 44, he would take on a 24-year career in higher education.

As chancellor from 1971 to 1995, Dr. Danforth oversaw an elevenfold increase in the university’s enrollment and a dramatic growth in academic prestige. During his tenure, faculty members won 11 Nobel Prizes and two Pulitzer Prizes, and Washington U. consistently ranked among the top universities in the nation.

Dr. Danforth often was described as self-effacing, and as someone whose status might be overlooked, at least for a moment. In 1994, Dorothy Danforth Miller, told a Post-Dispatch reporter this story about her brother:

“After Bill was married and out of medical school and worked at Barnes Hospital, he still drove this beat-up car,” she said. “One day he was dressed in old clothes and was in Brentmoor (an area of Clayton) when the car stalled. He managed to push it into our driveway. The yardman came up indignantly and said, ‘You can’t park that car there.’ That’s how unassuming he was, and is.”

Dr. Danforth was born April 10, 1926. Six years later, his father, Donald Danforth, would become president of the family business, while his grandfather continued to serve on the board.

William Danforth, the Ralston Purina founder, whose by-the-bootstraps memoir “I Dare You” was required reading for his grandchildren, left an indelible mark on his heirs. They were expected to give back, and part of their birthright was the Danforth Foundation, which has given out more than $750 million, much of it in the St. Louis region.

Dr. Danforth’s late brother Donald would become president of Ralston Purina, and his youngest brother, John, would become a three-term senator and ambassador to the United Nations.

Although Dr. Danforth grew up in the Great Depression, he was spared the shortages and sacrifices that defined that period for so many. While he was born into a life of patrician privilege, he also inherited a sense of public responsibility.

In an interview with the Post-Dispatch, he remarked, it was while studying at St. Louis Country Day School that he decided he wanted to be a doctor. He wanted to help people.

He was known as “Big Bill” at the exclusive prep school, where he also was editor of the yearbook and starred in several sports, most prominently track, as a high jumper and hurdler. The 1944 yearbook called him “probably the most reserved and cooperative character to be found ambling about the campus.”

Dr. Danforth would earn his undergraduate degree at Princeton University and his medical degree from Harvard University.

While at Harvard, Dr. Danforth fell for a Wellesley economics major from St. Louis named Elizabeth “Ibby” Gray. They married in 1950, but the Korean War would separate the newlyweds for two years as Dr. Danforth served as chief medical officer for four destroyers.

After the war, the couple returned to St. Louis. In 1957, Dr. Danforth became an instructor at Washington University, in 1960 an assistant professor, and in 1965 he was named president of the medical school and vice chancellor of the university. When Dr. Danforth was named chancellor in 1971, his wife was sure he would serve only three or four years, she told the Post-Dispatch in a 1993 interview.

Instead, Washington University would become Dr. Danforth’s professional priority for the rest of his life.

During his early years as chancellor, Dr. Danforth steered the university back into the good graces of St. Louis’ business and community leaders, many of whom were disappointed at the radical politics of students protesting the Vietnam War and military recruiting on campus.

He kept a low public profile for a university president — he was said to have refused even a reserved parking space — and his best work might have been behind the scenes. That was especially true with increasing the university endowment.

Dr. Danforth was able to court big donors successfully, possibly because he was one. The Danforth Foundation gave Washington University hundreds of millions of dollars.

As money started flowing into university accounts, Dr. Danforth greatly increased funding for science and medical research — a fact that did not always endear the chancellor to professors and students who believed the university wasn’t giving enough attention to liberal arts.

That fight came to a head in 1989, when the university announced that it would scrap its sociology department, once regarded as one of the top five in the country.

In 2006, Washington University renamed its Hilltop campus “the Danforth Campus” to honor contributions of Dr. Danforth and the Danforth family.

Also that year, Dr. Danforth took a leading role in Missouri’s Amendment 2, a ballot measure that asked voters to protect embryonic stem cell research. He spoke in favor of the effort, and donated at least $150,000 to the Missouri Coalition for Lifesaving Cures.

In 2007, he spoke before Congress to urge the formation of a $1 billion national institute for agricultural research. Closer to home, he co-chaired, with Frankie Freeman, an advisory committee appraising the troubled St. Louis public schools. The committee suggested that the most effective way to improve the district would be to turn control over to a non-elected, three-member board for six years.

In 2011, The Danforth Foundation, founded in 1927 by Dr. Danforth’s family, announced that it would spend down its remaining assets with a $70 million gift to the Donald Danforth Plant Science Center and then shut its doors.

Dr. Danforth was president of the foundation from 1965 until 1997, when he handed off the post to his younger brother, John. The foundation left a major legacy in St. Louis with more than $1.2 billion in grants over 84 years.

Among those gifts had been $60 million to help launch the Danforth Plant Science Center in 1998. The idea for a plant science center to help feed the world germinated, he said, after a conversation Dr. Danforth had with Peter Raven, then director of the Missouri Botanical Garden, and Virginia Weldon, a former Monsanto vice president.

“We were on our way to a meeting in Irvine, California, and it occurred to us that our region had the potential to emerge as an international leader in plant science,” Danforth said. He served as chairman of the nonprofit center’s board for many years.

Dr. Danforth told the Post-Dispatch in 2011 that the center fit the objective of his family’s foundation, to place “large bets that can make a long-range difference in people’s lives.”

A funeral will be private; arrangements for a memorial service are pending.

Taylor Tiamoyo Harris of the Post-Dispatch contributed to this report.

THURSDAY 14 SEPT 2006 - Former Washington University Chancellor Dr. Bill Danforth is photographed Thursday at the Hilltop Campus, due to be renamed the Danforth Campus in a dedication ceremony this Sunday. Robert Cohen | Post-Dispatch