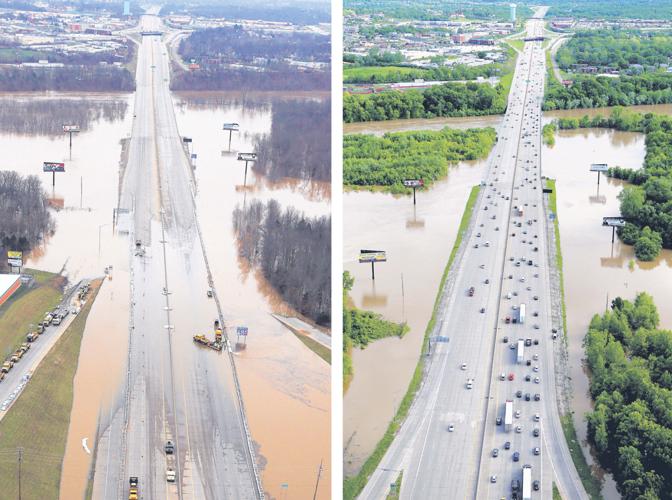 In the photo on the left, crews from the Missouri Department of Transportation and the Missouri National Guard battle Meramec River floodwater covering I-55 at Meramec Bottom Road on Dec. 31, 2015. At right, floodwater creeps up May 2, 2017 on the same stretch of I-55. (photos by David Carson/St. Louis Post-Dispatch) 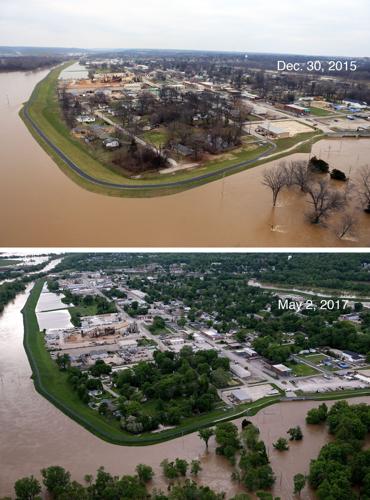 Photos comparing the December 2015 and May 2017 floods surrounding the town of Valley Park. Photo by David Carson, dcarson@post-dispatch.com 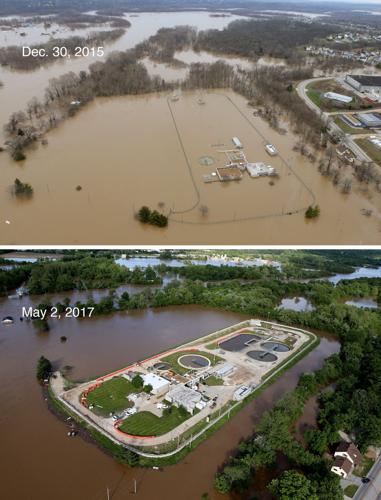 Photos comparing the December 2015 and May 2017 floods at the Fenton wastewater treatment plant. Photo by David Carson, dcarson@post-dispatch.com

Residents of waterlogged communities along the Meramec River and other swollen area waterways have experienced something unusual for the region.

In a span of just 16 months, the people of cities like Eureka, Pacific and Valley Park have twice braced for and dealt with so-called “100-year” floods that have left damage, financial loss and heartache in their wake. Now, as the floodwater recedes in some communities, residents are left wondering how soon the next catastrophic flood will arrive.

Answers from experts are not reassuring.

Officially, neither the 2015 flood nor last week’s disaster on the Meramec qualify as 100-year events — though that may be small comfort.

“This flood we’re preliminarily calling an 80-, 81-year event,” said Bob Holmes, the Rolla-based national flood coordinator for the United States Geological Survey. The 2015 flood, he says, ranked as a “91-year” event based on flood records for the Meramec at Eureka.

Though Holmes points out that it’s “not unheard of” to have floods of that severity happen in such close succession, others think it’s more than just a stroke of bad luck. They assign blame to worrisome climate trends that boost the likelihood of major rain events or failed flood policy that both constricts and swells waterways through levee construction and flood plain development.

Combined and left unmitigated, some say, both those factors mean the region’s flooding problems will persist .

“When you live in an area that can flood or develop in the flood plain, you’re always playing a bit of Russian roulette with the river or the climate,” Holmes said. “As we get in a wetter climate cycle, it could happen more and more often.”

Extreme bouts of precipitation don’t always translate to extreme floods, owing to a variety of factors such as soil moisture. Nonetheless, flood risk is rising with episodes of heavy rainfall becoming more common in the Midwest, says Ken Kunkel, a professor who researches extreme weather at North Carolina State University and is also involved with the National Climate Assessment.

“Every decade has been higher than the previous decade in terms of these events,” Kunkel said.

He says studies link more frequent downpours to rising global temperatures, which add more water vapor to the atmosphere, increasing the potential for precipitation whenever a storm system comes along.

“They’ve got more fuel to work with, with more water vapor,” Kunkel said.

At Sullivan, in the Meramec Basin, the National Weather Service reports that 11.88 inches of precipitation was recorded over a 10-day span from April 26 to May 5. That total approaches a 100-year rain event in terms of likelihood, based on probabilities from the National Oceanic and Atmospheric Administration.

That rain, however, came in a few distinct waves, which stack up as a series of smaller or less-historic rain events when viewed over different time intervals. Sullivan’s largest three-day rain total of 6.7 inches, measured from April 29 to May 1, falls between a 10-year and a 25-year rain event, according to NOAA.

All that rain capped a historically wet month for Missouri. Patrick Guinan, the state climatologist, said preliminary data suggest that the month will rank as the wettest April on record, with a statewide average just shy of 10 inches of precipitation — about a quarter of Missouri’s annual average.

But not everyone thinks climate change or sheer rainfall are the sole explanations for recent near-record-level flooding around St. Louis.

“Land use is really a huge factor in flooding,” Holmes said. “From what I’ve seen, it trumps climate change in some areas.”

Bob Criss, a professor at Washington University’s Department of Earth and Planetary Sciences who studies flooding, agrees that the cumulative impact of diverted water — and not rainfall — best explains the region’s recent major floods.

The problem, he says, was especially apparent with last week’s crest of the Mississippi River. Such a big river, he says, should not normally be so sensitive to similar episodes of rain. But he says it’s increasingly behaving like a small basin “because it’s far too squeezed” by levees that amplify flood severity.

“An event like this should not be setting the all-time (flood stage) record at Cape Girardeau, which it’s about to do, or maybe be No. 2,” Criss said. “This is not climate change. This is a constricted river.”

Criss is one of a group of area flood policy critics who suspect levees are chronically built higher than their authorized height. That belief was recently bolstered by the U.S. Army Corps of Engineers’ Rock Island District upstream from St. Louis, where officials reported that approximately 40 percent of the district’s Mississippi River levees are overbuilt.

It is unclear at this time whether those levees have contributed to flooding in the St. Louis area. The corps’ St. Louis District is conducting a similar investigation into local levee heights, set to be completed by March 2018.

Some residents in flooded communities on the Meramec are wondering whether there are enough flood control systems in place.

“There was a serious pursuit of damming this river up, some time ago,” said Fenton resident, John Huff, referencing a failed bid in the 1970s and ’80s to situate a dam near Meramec State Park in Sullivan. “This levee system isn’t working.”

Though some say it may have helped with flood control, dams come with their own complicated web of costs and benefits. Criss, for one, says it would have been the wrong approach, especially given the number of caves in that location.

“The whole area is Swiss cheese,” Criss said. “You cannot build a dam on that kind of rock.”

Plus, he points to severe floods in northwest Missouri in 2011 as a powerful illustration that dammed watersheds aren’t immune to flooding.

“That is just downstream from the largest network of flood control dams in the world,” said Criss, adding that those floods were largely triggered by rain as far up the Missouri River as Montana. “All the reservoirs were full. … You had to dump water from every reservoir down the line.”

Missouri alone has been affected by four separate billion-dollar flood events in the last decade. In inflation-adjusted records dating back to 1980, NOAA reports that only one other such event — the Flood of 1993 — surpassed the billion-dollar threshold in the state.

Some say policymakers need to adjust to new recurring climate extremes, or continue to pay a hefty price.

“It is becoming, more and more, a normal of extremes,” Wellenkamp said. “The happy medium is becoming less and less frequent.”

He says greater regional coordination will be required to restore “natural infrastructure” such as flood plains and wetlands to absorb flood risk along the river, instead of defending localities by simply “sending risk downriver.”

“It is certainly changing the calculus of how these challenges are approached,” Wellenkamp said. “The more conventional ideas don’t seem to be cutting it anymore. We need to approach these problems from larger, regional scales.

“Once upon a time, you could just focus on your part of the river,” he added. “Now it’s ballooning into a regional question.”

While many agree that a different approach will be needed going forward, some also wonder whether that should apply in the immediate aftermath of the latest flooding around St. Louis, broaching the difficult question of whether it’s prudent to rebuild in some areas.

“I feel badly for these people — this is a tragedy,” said Criss. “But there’s a point, are you really going to replace that carpet again?”

“There’s a point where one has to realistically evaluate the situation,” Criss said. “We have to expect higher water with increased frequency.”

At Eureka, preliminary data show that flooding along the Meramec River last week was "almost identical" to the then-record flood levels experienced in December 2015.

"They're almost identical in terms of their peak," said Bob Holmes, national flood coordinator for the United States Geological Survey. "The rain situation set up pretty well about the same."

If made official, this year's flood event will claim the top spot as the highest crest on record at the location. So, why is this slightly bigger flood being considered an approximately 80-year flood, while its predecessor was a 91-year flood? Holmes said it's because those labels don't indicate the severity of a flood, but the likelihood that it will happen in a given year. With the 2015 flood taken into account by flood records, the chances of a similar event happening this year were greater — down to a roughly 1-in-80 chance, as opposed to a 1-in-91 chance.

Editor's note: Data tracking the historic crests of the Meramec River originated with the U.S. Geological Survey and are shared with the public by the National Weather Service and other federal agencies. Charts published Sunday failed to correctly credit the USGS.

How levees may have contributed to flooding in the St. Louis region

As water from the Meramec River escaped it's banks the second time in two years, it was inevitable to compare the experiences and views from 2…

In the photo on the left, crews from the Missouri Department of Transportation and the Missouri National Guard battle Meramec River floodwater covering I-55 at Meramec Bottom Road on Dec. 31, 2015. At right, floodwater creeps up May 2, 2017 on the same stretch of I-55. (photos by David Carson/St. Louis Post-Dispatch)

Photos comparing the December 2015 and May 2017 floods surrounding the town of Valley Park. Photo by David Carson, dcarson@post-dispatch.com

Photos comparing the December 2015 and May 2017 floods at the Fenton wastewater treatment plant. Photo by David Carson, dcarson@post-dispatch.com