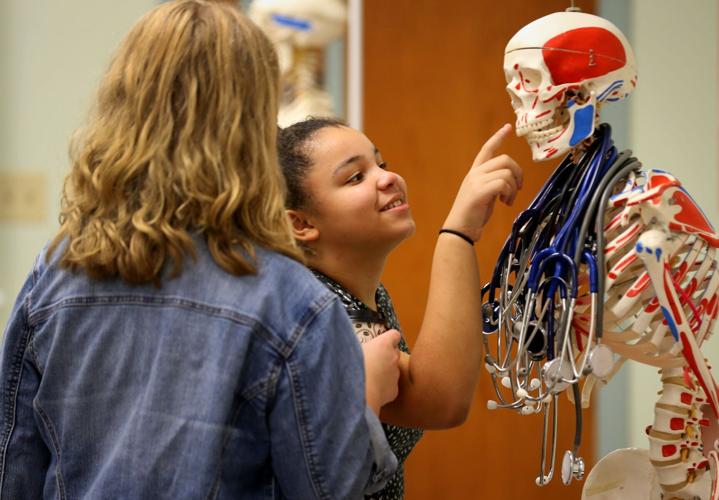 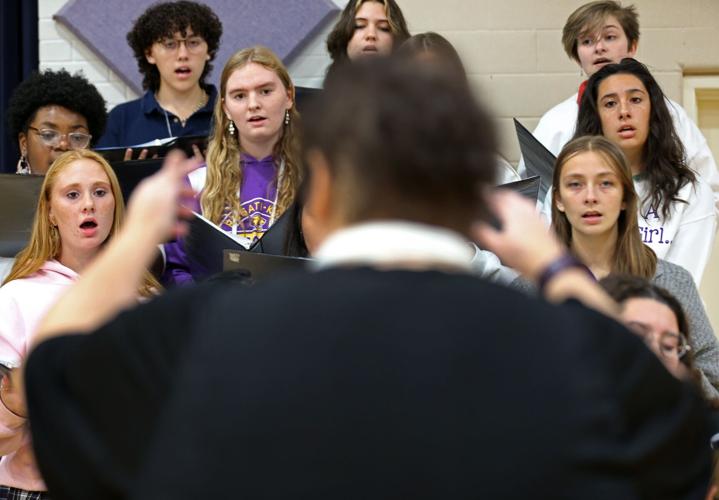 Members of the Rosati-Kain High School Choir perform on Sunday, Oct. 30, 2022, during an open house for prospective students at the Catholic school in St. Louis' Central West End. 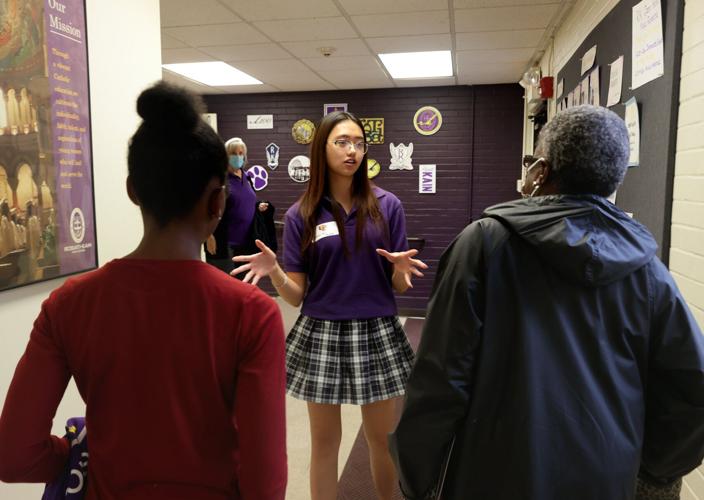 Nikki Nguyen, a senior at Rosati-Kain High School, leads a tour of the school on Sunday, Oct. 30, 2022, for Clayton Fielder, left, a sixth grader at Forsyth School in Clayton, during an open house for prospective students in St. Louis' Central West End.

ST. LOUIS — Tillie Schuckman arrived at Rosati-Kain High School on Sunday clad in head-to-toe purple, matching the rain-speckled welcome mat that had been rolled out the front door. The sixth grader from St. Louis is already well-versed in the school’s culture, as a graduate of its summer art and basketball camps.

“If this place is around in 2025, Tillie will be here with bells on,” said her mother, Jorie Schuckman, class of 1998. “This was the formation of who I am as a person.”

Whether the all-girls Catholic school in the Central West End will be open next fall, much less three years from now, is far from certain. Last month, the Archdiocese of St. Louis announced the closure of Rosati-Kain and St. Mary’s, an all-boys high school in the Dutchtown neighborhood. It was the first decision in the “All Things New” reorganization, which is expected to close dozens of parishes and grade schools.

Staff, parents and alums of both schools quickly mobilized, announcing plans to remain open as independent institutions. But low enrollment, rising costs and the specter of instability pose high barriers.

St. Mary’s has an enrollment of 222, down about 50 from last year. Rosati-Kain, the oldest archdiocesan school in St. Louis, contracted even more, to 188 from 249. Only 33 girls comprise the freshman class.

Those numbers are deceiving, said Cynthia Goudy, the chair of Rosati-Kain Forever, a cadre of more than 500 supporters that formed in the wake of the announcement. COVID, followed by rumors last spring that the school was closing, squelched many applicants.

But the committee has received donations from alumnae and community members, Goudy said, as well as moral support from the other eight all-girls Catholic high schools in the region.

“We’d love to get the number of students to 200 next year,” said Goudy.

And there is room to grow beyond that. The campus, in the shadow of the Cathedral Basilica of St. Louis, added a new library, STEM lab and common area as part of an $8 million renovation in 2016.

On Sunday, alumnae, some of whom graduated five decades ago, mingled and marveled at the changes as students gave tours to middle schoolers.

Kateri Chapman-Kramer, class of 2000, brought her eighth grader, Genijah Johnson, to show off her old stomping grounds, minus the payphones she remembered in the hallways.

“We were talking on the way here about what a great experience it was for me,” said Chapman-Kramer, who lives in Brentwood.

At the entrance to the school, they posed for a Polaroid with a plaid-skirted Kougar. Senior Bell Farace bore the humid conditions as the furry mascot in tribute to her school. She feels for her underclassmen friends.

“It’s hard seeing how upset they are,” Bell said, during a break for fresh air. “We’re all hoping for the best. I think there’s a chance.”

It will be an uphill battle. So far, efforts to revive other shuttered schools have failed. St. James the Greater in Dogtown was temporarily saved by a deep-pocketed donor but only managed to stay open for two more years, closing in 2019.

Catholic school attendance is down across the board, dropping 22% in the last decade, according to the archdiocese. Three high schools closed in that time: Trinity in Spanish Lake, John F. Kennedy in west St. Louis County and St. Elizabeth Academy in south St. Louis — leaving Rosati-Kain as the only all-girls school in the city limits.

“I’d prefer this,” she said, before taking a tour with her parents.

“Right now, we feel that everything’s topsy-turvy,” said Chloe’s dad, Matt Hicks. “We figure we’ll give it a try.”

Rosati-Kain Forever, not quite a month old, has been in a full sprint since it formed.

Committee members met with the archdiocese’s education office last week to ask for its blessing to become an independent Catholic school. That answer is expected in the next few days.

Melissa Brickey, one of seven sisters who graduated from Rosati-Kain, said the support network has several financial models in the works but that tuition will likely remain near its current rate of $13,500. Almost three-quarters of students receive financial aid, with scholarships averaging $6,000, she said.

Applications to attend a Catholic high school are due Nov. 15. On Monday, it will be business as usual at Rosati-Kain. It’s also the first day of basketball tryouts. Coach Todd Hinderliter is hoping his sixth season will not be his last.

“I really enjoy coaching girls basketball,” he said. “Our philosophy here is never give up.”

Which St. Louis area Catholic parishes will close? The clues are in the data.

No guarantees for Catholic schools as St. Louis Archdiocese delays decision on closures

Archbishop Rozanski says he wants to wait until decisions are made on parish consolidations.

Members of the Rosati-Kain High School Choir perform on Sunday, Oct. 30, 2022, during an open house for prospective students at the Catholic school in St. Louis' Central West End.

Nikki Nguyen, a senior at Rosati-Kain High School, leads a tour of the school on Sunday, Oct. 30, 2022, for Clayton Fielder, left, a sixth grader at Forsyth School in Clayton, during an open house for prospective students in St. Louis' Central West End.