JEFFERSON CITY — A state-commissioned investigation has found officials did not recognize the severity of early COVID-19 cases within Missouri veterans homes, failing to aggressively correct course to fight an outbreak that has killed more than 100 veterans housed in state nursing homes since September.

The report said the veterans commission, which operates seven homes statewide, failed to prepare for a “severe and prolonged” outbreak.

“The lack of a comprehensive outbreak plan led to confusion and inefficiencies, and it almost certainly contributed to the inability to contain the spread of COVID-19 once it was introduced into the Homes,” the report said.

The report said that although staff provided data about COVID-19 cases to the Missouri Veterans Commission, “MVC Headquarters simply lacked the ability to engage in meaningful analysis of this data,” and said the commission should have recognized an outbreak at the Cape Girardeau home by Sept. 2, as cases multiplied.

“Even as cases increased, MVC Headquarters failed to appreciate the need to move quickly to isolate positive patients,” the report said.

The report said the lack of understanding negatively affected interactions with external stakeholders, including the Department of Public Safety, and, “perhaps most significantly,” the report said, “the MVC failed to fully engage with the Fusion Cell,” part of the state’s collective response to the virus.

“(I)n weekly briefings to DPS, the MVC provided little data about the outbreak, other than its impact on staffing vacancies — missing a critical opportunity early on to engage outside agencies and resources,” the report said.

While residents and staff awaited test results, they were not quarantined, the report said.

The report recommends enhanced data analysis and outlines response strategies. It says the state should examine oversight of the commission, which is housed under the Department of Public Safety but reports to a volunteer commission.

It also hints at future shake-ups: “Accountability measures and a clear structure involving direct oversight may be necessary to ensure better communication exists between MVC, DPS, and other stakeholders.”

A spokesman for the Missouri Veterans Commission said on Nov. 18 that 109 residents of its nursing homes had died of COVID-19 complications. The commission has not provided more recent figures.

Gov. Mike Parson, a Republican, ordered the independent investigation of the Missouri Veterans Commission in early October after the deaths of 38 veterans, housed at four homes, in September.

Tim Noonan, chairman of the Missouri Veterans Commission, said Wednesday, before the report’s release, that the commission implemented interim recommendations in early November in the absence of a final report.

“At every level ... we’re going to assess whether or not we still have trust and confidence in the leadership and management,” Noonan said. “We’ll make decisions.”

He said that in addition to setting up a hotline, investigators reviewed hundreds of documents and dispatched Pathway Health, which serves clients in the long-term care industry, to audit all seven veterans nursing homes.

“We appreciate the insights received from those interviewed by our team, especially the Veterans and their families, and we are confident in the corrective actions we’ve recommended to ensure their future safety,” Kaveney told the Post-Dispatch in a statement.

“The report is thorough, it’s fact-based and it is specific” in terms of “recommendations and reforms,” said Noonan, the chairman of the veterans commission. Former Gov. Eric Greitens appointed Noonan amid revelations in 2017 of mistreatment at the St. Louis Veterans Home.

Until September, the commission had reported only one COVID-19 death among veteran residents — a St. Louis Veterans Home resident hospitalized in April.

Parson visited the Mt. Vernon Veterans Home on Sept. 15, saying the commission had set a nationwide standard for care during the COVID-19 pandemic. The visit was the day before the southwest Missouri facility reported its first case of the disease.

He tested positive for COVID-19 on Sept. 19 and was transferred to a Joplin hospital on Oct. 1, only after he became severely dehydrated and his kidneys began to fail, according to medical records and his physician. Mitchell died Oct. 10.

Parson tested positive for COVID-19 on Sept. 23. During a news conference on Oct. 15, Parson again said the state’s veterans homes had led the nation.

“Number one, we were somewhat leading the nation in the way we were taking care of our veterans in this state in our veterans homes,” Parson said.

He said that after receiving information on a “high spike” at “a couple of veterans homes” the state deployed testing supplies and “immediately sent in our box-in strategy.” He said the governor’s office asked the veterans commission for an investigation.

“It was unfortunate that it happened,” Parson said.

But in addition to taking credit for operations before the virus infiltrated the veterans homes, Parson also sought to distance himself from the situation, a potential liability during his campaign for governor. 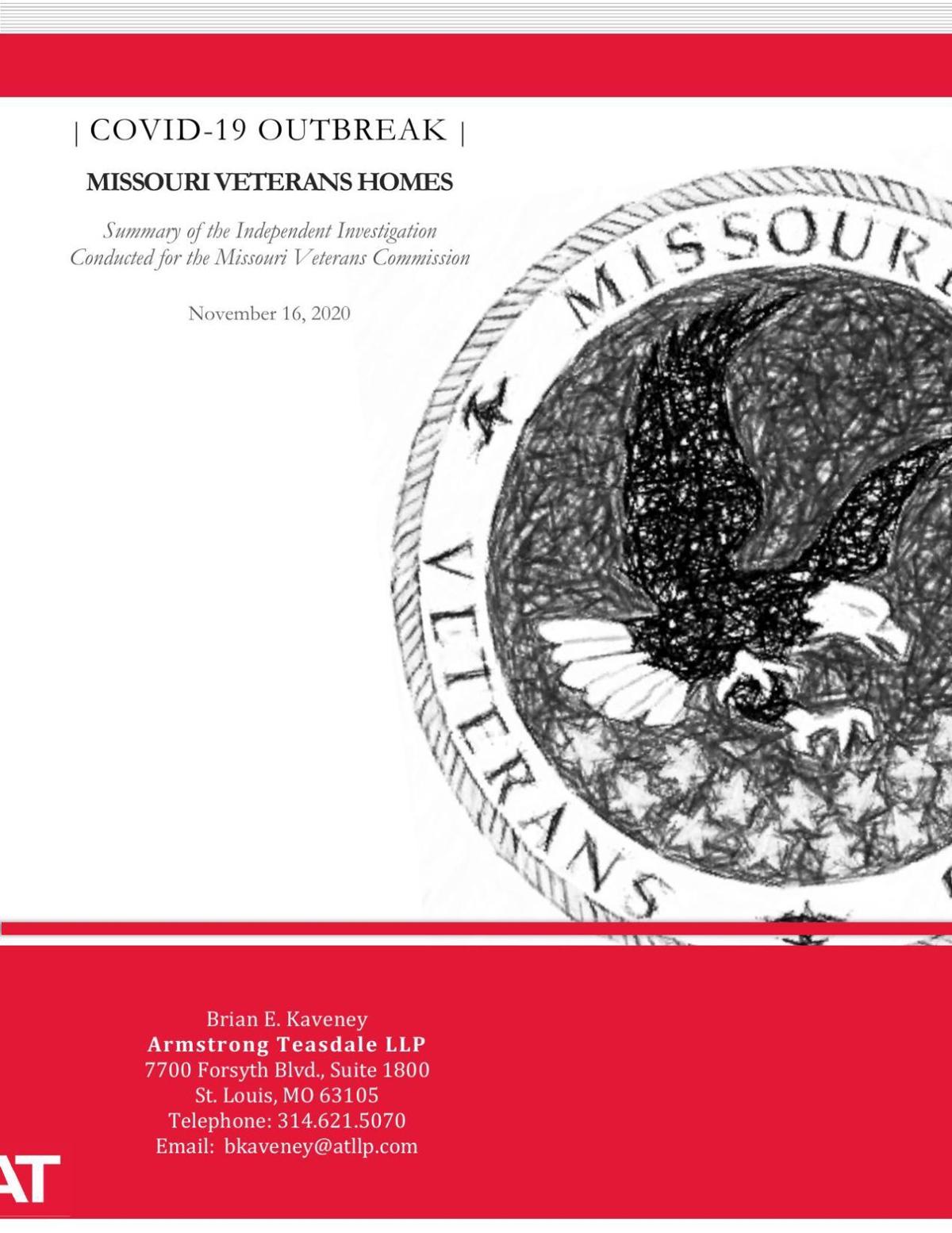 Roy Mitchell, housed in a Missouri veterans home, died of neglect, not coronavirus, his family says

The dementia patient tested positive for COVID-19 on Sept. 19; he wasn’t hospitalized until Oct. 1 after he’d stopped eating and drinking.

The state’s seven veterans homes had recorded just one COVID-19 death during the pandemic — until last month.

The governor visited a southwest Missouri veterans home the day before it confirmed its first case of COVID-19.

The state said this week that 73 veterans had died of COVID-19 during an ongoing outbreak at multiple veteran nursing homes.