Pros, cons of Electoral College debated as electors prepare to vote
0 comments
Share this
{{featured_button_text}}
1 of 2 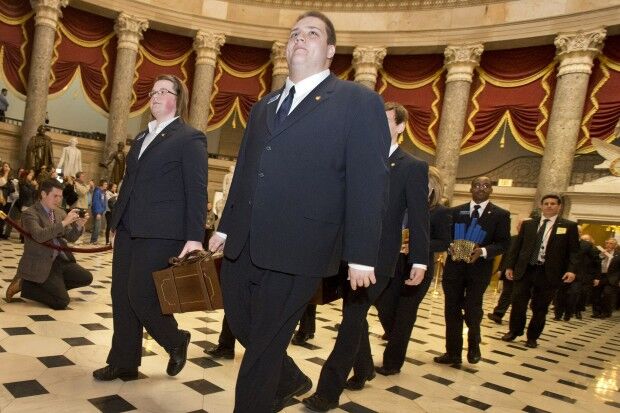 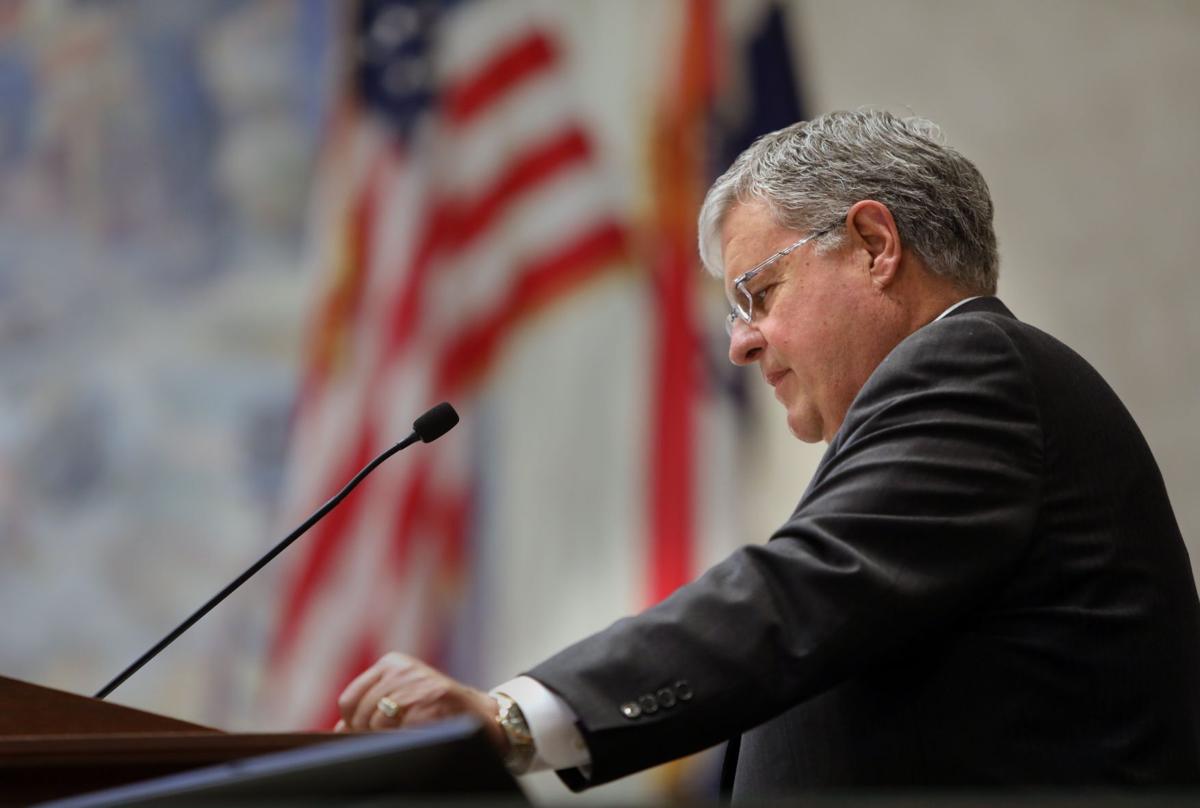 JOPLIN — Ron Richard has by now memorized the 204-mile drive from his Joplin home to the state Capitol in Jefferson City. Still, the trip he’s making next month to Cole County will serve as a memorable occasion for the longtime state lawmaker.

For the first time, Richard is serving as an elector to represent the 7th Congressional District, which is made up of 10 Southwest Missouri counties, including Jasper and Newton.

“People aren’t going to like hearing this, but when they vote in an election for a president, they’re actually voting for a person — an elector like myself — to cast their vote” on their behalf, Richard said.

It’s a key component of the Electoral College, the oft-misunderstood method for indirectly electing the president of the United States, serving as a “check and balance” to the nation’s popular voting system.

The Electoral College consists of 538 electors selected at the state level every four years for the sole purpose of electing the next president. Of those 538 electors, an absolute majority of 270 or more electoral votes is required to elect the nation’s next president.

The Show-Me State has 10 electoral votes — a number allocated based on population and a small number when compared with California’s 55 votes, Texas’ 38 votes or Florida’s 29 votes.

On Monday, Dec. 14 — 42 days after the Nov. 3 election — Richard will drive more than three hours to Jefferson City, walk into the Missouri secretary of state’s office and cast his vote on behalf of the 7th District voters’ wishes. The electors’ votes are then sent to the president of the U.S. Senate, who, on Jan. 6, will tally the votes and announce the winner. The process was first laid out by the Electoral Count Act of 1887.

It’s a rather simple task — drive up, cast a vote and drive back to Joplin. Yet it’s so much more than that, Richard said. It’s contributing in a distinct and meaningful way to the democratic process, still the envy of the world, he said.

“It’s quite the honor,” said Richard, who discovered he was on the slate of names of electors eight weeks ago from Newton County Republican Party chairman Nick Myers. “I thought it would be kind of interesting to go one time and do it.”

Once in Jefferson City, he’ll cast his vote for Republican Donald Trump, who won Missouri’s 10 electoral votes on Nov. 3 when a majority of the state’s voters supported the president.

Although some electors in the past have changed their votes from one candidate to the other — there is no law binding an elector to a specific vote, he said — Richard wouldn’t dream of doing something he considers to be blatantly unethical.

“You have to follow the will of the people,” he said. “You give your word to vote the way the people you represent did, how they cast their ballots. I’m not going to do anything that would diminish the people’s vote. You’re bound by your word.”

The relevancy of the Electoral College system is a matter of ongoing debate that seems to flare up like clockwork every four years, said Will Delehanty, associate professor of political science at Missouri Southern State University.

It basically comes down to a war waged between the “one person, one vote” system and the “winner takes it all” system, he said.

Nothing much is said, however, when both the popular vote and the Electoral College count match on the national scale, as seen in the 2020 race. A matching of the two happens in a vast majority of U.S. elections, most recently those involving Democrats Barack Obama and Bill Clinton and Republican Ronald Reagan, he said.

“People tend to not have this knee-jerk reaction, ‘Oh, we need to remove it or reform it,’ (when) the popular vote is translated through the Electoral College vote into the eventual winner,” he said.

Electoral College supporters, he said, argue that the process serves as a fundamental component of American federalism by protecting state-based interests in the presidential election. In other words, presidential candidates must appeal to residents living in all 50 states rather than focus all their money and attention only in heavily populated areas.

According to a 2018 American Community Survey, half of the U.S. population lives in just 143 urban and suburban counties out of a nationwide total of 3,143 counties. By ridding the country of the Electoral College, supporters say, the whims and wishes of residents living in three-fourths of the country would be drowned out by those living in America’s 30 largest cities.

“I think the Electoral College resonates in that it is a compromise with the popular vote, and it lets smaller states have the same amount of power as the big states,” Richard said. “I think that’s the overriding issue, at least here in Missouri.”

Without it, the president of the United States would be chosen “by how people living in cities in five or six states vote,” he said.

Critics, on the other hand, argue that the Electoral College is less democratic than a direct popular vote, and that the system violates the democratic principle of a “one person, one vote” concept, Delehanty said. Because of this, a president who did not win the popular vote may be elected to office.

This has happened five times in America’s history: John Quincy Adams in 1824, Rutherford B. Hayes in 1876, Benjamin Harrison in 1888, George W. Bush in 2000 and Trump in 2016. Four years ago, Trump received 304 electoral votes to Hillary Clinton’s 227, although Clinton nabbed 2.8 million more popular votes.

“So I think that is the problem (for critics) — when the Electoral College intervenes and prevents the popular vote winner from openly becoming the winner,” Delehanty said.

The original intent behind the Electoral College was to avoid an ill-informed public from voting into the White House a demagogue, he said.

“So the question asked today,” he said, “is whether or not the public really needs that protection. And I think the argument now is that with widespread circulation of news and easy access to information and the technology available to conduct a popular vote election, it does seem like the Electoral College is” looking more like a byproduct of yesteryear.

Despite this, Delehanty is doubtful the Electoral College would ever be dismantled. Such a move would require a constitutional amendment, which is difficult to do, he said.

One solution to the stalemate could be to implement changes at the state level because the U.S. Constitution does not specify how individual states must allocate their electoral votes. By creating their own laws and statutes, “they could reform the system at the state level without having to go through the political conflict and difficulty of amending the federal Constitution to remove the Electoral College,” Delehanty said.

With these types of reforms, states could embrace several alternative options, including a popular concept based around the proportional allocation of Electoral College votes, Delehanty said.

A map of 2020 presidential election votes in Missouri would show a sea of Republican red across most of the state, punctuated by Democratic blue specks in select areas — primarily located in and around Kansas City, St. Louis, Columbia and Jefferson City. Despite their small size, those areas hold nearly one-third of the state’s total population.

Proportional allocation would allow a district leaning toward a state’s minority party to win a percentage of an Electoral College vote. It “would allow for urban areas with higher populations to have greater (political) weight versus rural areas of a state, as the American population becomes more urban and less rural,” Delehanty said. “It seems feasible that if there would be some way of distributing urban population votes in Missouri, the areas would have a greater say in the (Electoral College vote) distribution system, so they would actually matter for the purposes of who becomes president.”

Proportional allocation, he said, “would remove some of that mismatch problem between the popular vote winner and the Electoral College vote winner,” Delehanty said.

Among the report’s findings, Missouri has 2,190 bridges and over 7,576 miles of highway in poor condition, and that’s increased commute times by nearly 6% since 2011.

A Springfield man has been charged with second-degree murder in the shooting death of a transgender woman, Greene County officials said Friday.

The invasive species is crowding out native trees.

This will mark the first time the marching band will participate in the annual holiday tradition in New York.

When a dispatcher asked why he did it, he allegedly replied, “Well, they wouldn't leave. I've been waiting for a week for them to leave. I've had enough.”

Fairview Mayor Ashley Rodgers hopes that the April 6 municipal elections will help restore two members to the board.

A central Missouri gun store owner is accused of illegally entering and causing a disturbance in the U.S. Capitol during the riot that occurred following the "Stop the Steal" rally in Washington on Jan. 6, according to documents filed in federal court Monday.

The director of the conservation department said the hunt was a ‘testament’ to years of management efforts.