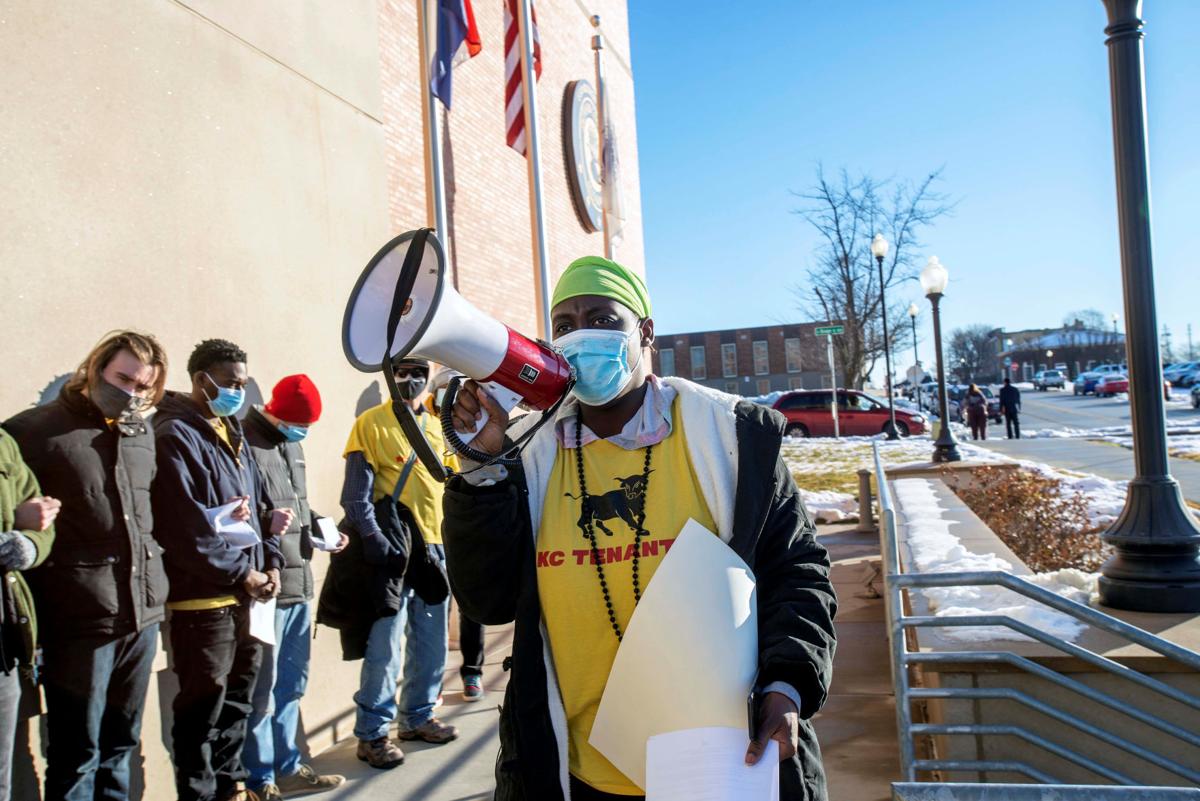 Ashley Johnson, a leader and organizing fellow at KC Tenants, a renter advocacy group, leads a blockade to protest eviction proceedings at the Eastern Jackson County Courthouse in Independence, Mo., on Jan. 5, 2021. Carly Rosin/Handout via REUTERS. 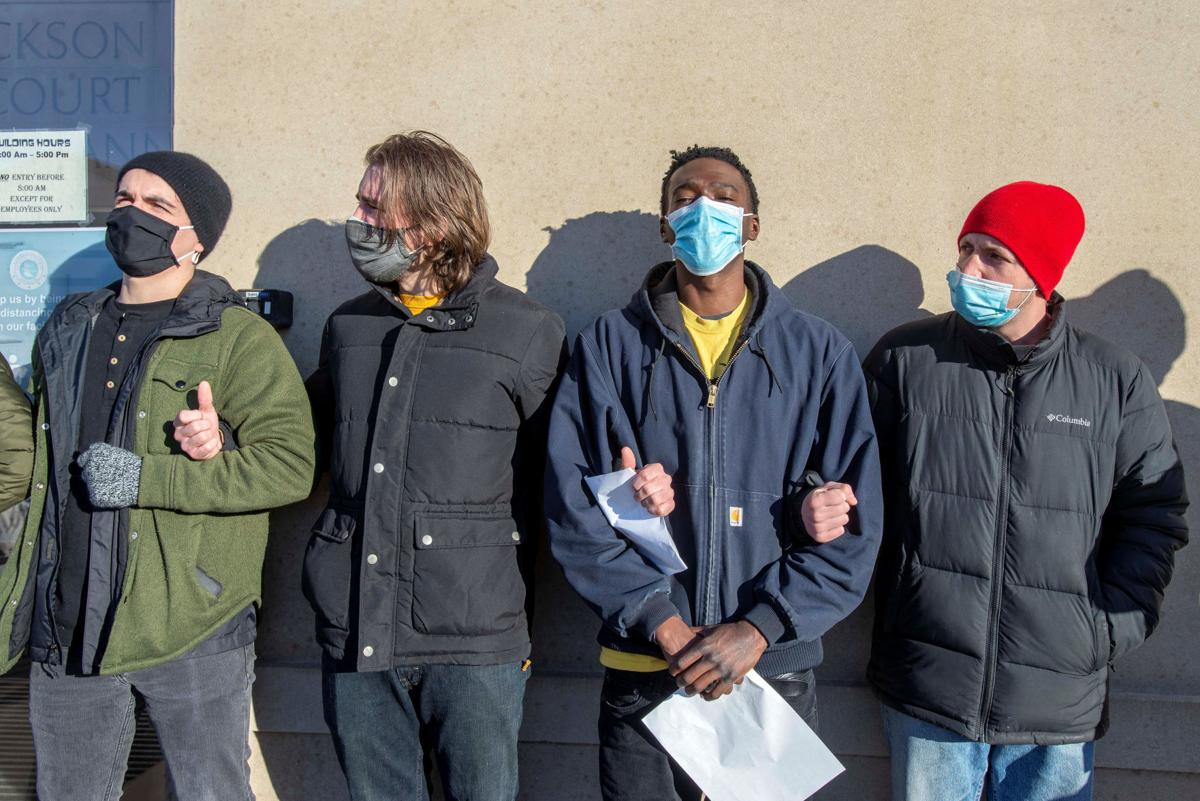 Members of KC Tenants, an anti-eviction group, maintain a blockade at the Eastern Jackson County Courthouse in Independence, Mo., on Jan. 5, 2021. Carly Rosin/Handout via REUTERS

KANSAS CITY, Mo. — As freezing temperatures settled over Kansas City on Jan. 28, Judge Jack Grate opened his online courtroom. The first of 100 cases on his docket was that of Tonya Raynor, a 64-year-old who owed $2,790 in back rent and fees on an apartment on the city’s east side, a swath of vacant storefronts and boarded-up properties.

“Miss Raynor, are you there?” asked Grate, a burly 71-year-old sporting a beard, a buzz cut and a rumpled, orange short-sleeve shirt.

A booming voice responded: “This is not justice. This is violence.” Soon a chorus joined in: “Judge Grate, you are making people homeless! You are killing people!”

The voices in the virtual courtroom of the Jackson County Circuit Court belonged to members of KC Tenants, a group that brought Kansas City’s eviction operation to its knees last month. The group is one of scores of tenants’ unions and anti-eviction activist groups in cities nationwide whose memberships have exploded during the COVID-19 pandemic.

Housing experts liken their combative tactics to the rent strikes that swept the United States during the Great Depression.

Some of these activists operate loosely under the umbrella of the Autonomous Tenants Union, which works to end evictions nationally. Others, like KC tenants, are independent. Their anthems are “Cancel Rent,” “No Debt,” and “No Evictions.”

They are calling for more federal relief to help tenants pay back rent. Landlords, some of whom haven’t been paid in nearly a year, say they are hurting financially too, and are being unfairly villainized for a housing crisis created by a once-in-a-century pandemic.

In Kansas City, Judge Grate ignored the protestors and tried to talk over them at the Jan. 28 hearing, seemingly unaware of the mute button. Ultimately, he shut down the proceedings.

It was yet another showdown in a months-long campaign by KC Tenants that culminated in the delay of 854 evictions in Jackson County in January, according to Jordan Ayala, an eviction researcher and Ph.D candidate at the University of Missouri-Kansas City, who analyzed the court filings. That number matches estimates from KC Tenants’ leadership.

Valerie Hartman, the court’s public information officer, disputes that figure but said the court does not track the number of hearings or their outcomes.

In September, the U.S. Centers for Disease Control banned evictions nationally amid concerns about the public health risks of putting people out of their homes during a pandemic. President Joe Biden has extended that moratorium to March 31.

Still, exceptions in the measure have allowed some evictions to proceed. No comprehensive database exists to track those figures. But since the spring, nearly 250,000 tenants have been evicted in 27 U.S. cities tracked by Princeton University’s Eviction Lab. When the federal ban lifts, up to 40 million people — owing more than $57 billion in back rent — could be evicted, according to Moody’s Analytics, an economic research firm, and the Aspen Institute, a global think tank.

“We take direct action to intervene in a violent system that exists to protect private profits at the expense of human lives," said KC Tenants director Tara Raghuveer, 28.

Similar scenes have played out nationally. In Brooklyn, New York, protesters have blockaded apartment entrances to prevent evictions, and demonstrated in the offices of lawyers representing landlords. They have also held “stoop courts” — appearing on screen with tenants outside their homes during online eviction hearings.

In Wisconsin, the Milwaukee Autonomous Tenants Union has been robocalling landlords to pester them for tenant relief. It has also staged marches to landlords’ offices, city hall and local officials’ homes.

Over the summer, the group targeted Youssef “Joe” Berrada, who owns more than 8,000 housing units, many in low-income neighborhoods.

After Berrada filed eviction notices on 330 tenants, the protest group waged a social media campaign against him, as well as phone blasts and pickets at his corporate office. In August, when Berrada announced he would pause evictions during the COVID-19 crisis, the group took credit.

Joe Goldberger, a lawyer representing Berrada, denied the tenants’ union influenced that decision. He urged lawmakers to step up with compensation for landlords.

"Without governmental assistance, tenants will owe back rent in amounts that can’t be repaid,” said Goldberger in a statement. That leaves landlords facing foreclosures, overdue tax bills and deferred maintenance on their properties, he said.

It’s a rare point of agreement between anti-eviction groups and landlords. Both groups say the $25 billion in rental relief passed by Congress in September is not enough.

A White House spokeswoman said Biden has called on Congress to approve another $30 billion in renter assistance, and to extend the eviction moratorium through September.

Just after 9 a.m. on the morning of Jan. 8, two Kansas City civil process deputies showed up on the doorstep of 38-year-old Donald Smith to evict him. The unemployed former railroad conductor owed more than $6,000 in back rent and fees.

Smith unexpectedly grabbed a weapon after allowing the deputies into his home, and they shot him three times in the abdomen, said court spokeswoman Hartman. Smith remains hospitalized, and the incident is under investigation.

Smith could not be reached for comment. A family member who asked not to be identified told Reuters that the weapon was a BB gun, and that Smith had suffered a mental breakdown after losing his job, compounded by the isolation of pandemic lockdown.

The night of the shooting, KC Tenants marched to the quaint, two-story home of Judge J. Dale Youngs, who presides over the circuit court that approved Smith’s eviction. Puzzled neighbors watched from their lawns as the group chanted “end eviction violence” and brandished signs reading “Judge Youngs, You Have Blood on Your Hands,” according to interviews with group members and videos of the protest.

KC Tenants followed up with a rally. Two days after the shooting, Youngs ordered a two-week pause on eviction hearings, citing concerns about employee safety and “social and political unrest.”

When the halt lifted two weeks later, KC Tenants began interrupting hearings online, over the phone and in court, ultimately disrupting 90% of the evictions scheduled in January, according to researcher Ayala.

Hartman, the court spokeswoman, said those claims are "false," adding that many hearings and trials took place as scheduled.

The reprieves won by KC Tenants are only temporary. Most of the delayed eviction hearings were re-scheduled for February and March, according to researcher Ayala and court docket data.

But there was no postponement for tenant Raynor, the first tenant called in the chaotic Jan. 28 hearing in Judge Grate’s online courtroom. Raynor did not attend the proceedings, as most tenants don’t, housing experts say. That led to an automatic win for the landlord.

Before Grate shut down the day’s online session, he ordered Raynor’s eviction and a $2,790 default judgment against her. Raynor, who could not be reached for comment, had 10 days to vacate the apartment.

That eviction will remain on her record for at least seven years, a stigma that makes it difficult for most renters to obtain new housing.

Missouri Senate votes unanimously for the bill that would help renters and landlords.

Ashley Johnson, a leader and organizing fellow at KC Tenants, a renter advocacy group, leads a blockade to protest eviction proceedings at the Eastern Jackson County Courthouse in Independence, Mo., on Jan. 5, 2021. Carly Rosin/Handout via REUTERS.

Members of KC Tenants, an anti-eviction group, maintain a blockade at the Eastern Jackson County Courthouse in Independence, Mo., on Jan. 5, 2021. Carly Rosin/Handout via REUTERS