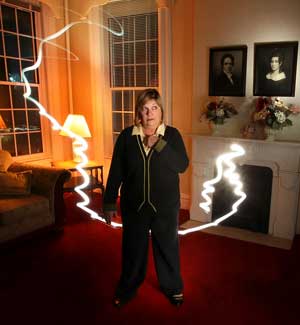 Tuesday October 19, 2010--Michelle Giessman, director of student housing at Lindenwood, stands in the common area of Sibley Hall on the Lindenwood campus in St. Charles. For decades, freshman at Lindenwood University have heard the tales about deceased founder Mary Sibley roaming the campus, Giessman and a few professors and long time staffers say the stories are real. A picture of Mary Sibley can be seen to the right hanging on the wall. This image was made during a 15 second exposure using a flashlight to light the room, the technique is called painting with light. David Carson dcarson@post-dispatch.com 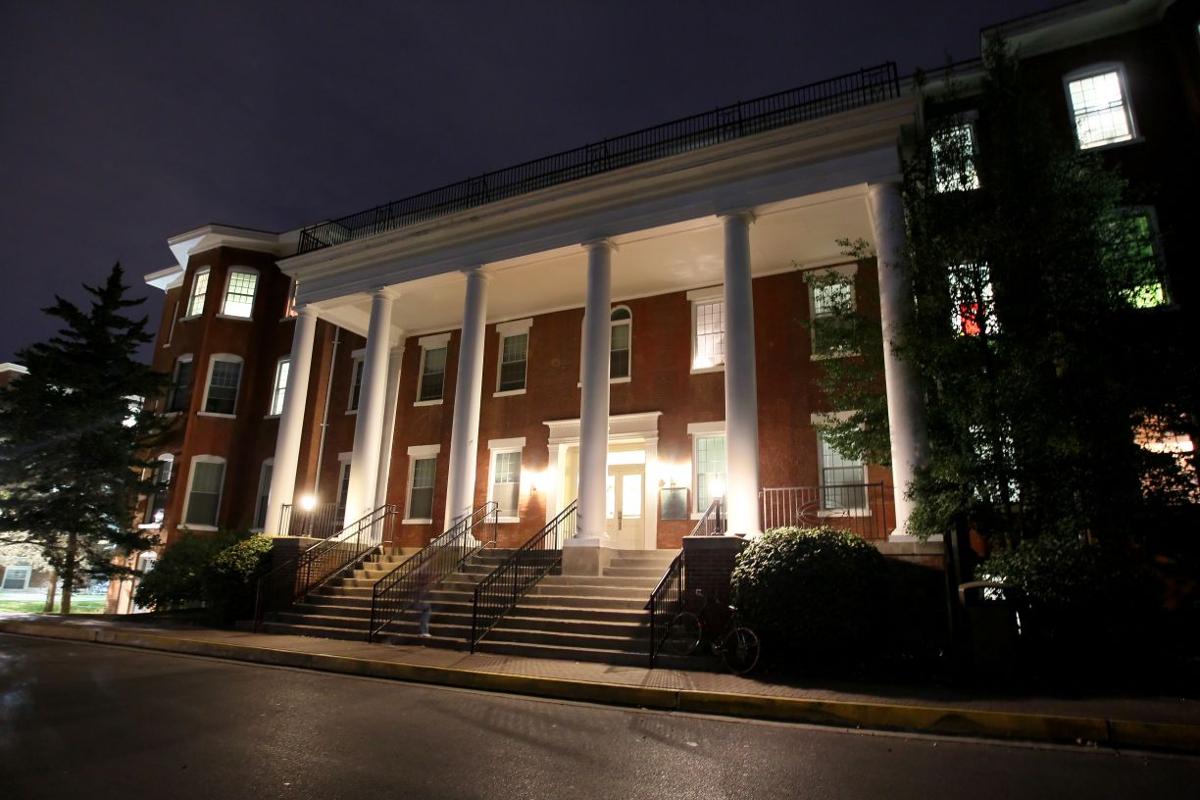 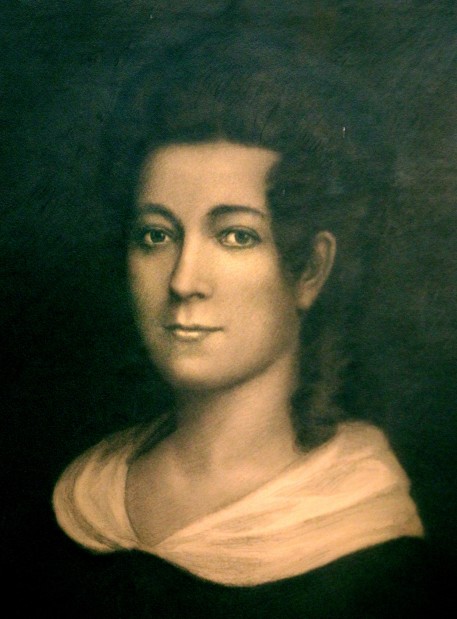 Tuesday October 19, 2010--A portrait of Mary Sibley founder of Lindenwood University in St. Charles. Some long time staffers at the university say the ghost of Mary Sibley haunts Sibley hall to this day. David Carson dcarson@post-dispatch.com

ST. CHARLES • For decades, reported sightings of Lindenwood University founder Mary Sibley have perpetuated the belief that she still roams the grounds looking out for her students.

A Halloween legend says she rises from her grave — just a short distance from the Harlen Hunter Athletic Stadium — and walks to the Sibley Hall chapel, where she sits at the old pipe organ and plays a rendition of her favorite hymn, "Nearer My God to Thee." Sibley died of natural causes in 1878.

Most brush off those tales and other weird happenings as campus lore, but some, like Joyce Norman, aren't so sure. She says she saw an illuminated figure of a woman walk the length of Sibley Hall's locked attic one night.

"I just stood there and was in awe of what I was watching," Norman said.

She supervises maintenance, housekeeping and grounds for the university now, but 31 years ago she was 18 and working as a clerk in the old bookstore. The T Hole building stayed open until 7 p.m. then. It was a slow night, so Norman was up by the cash register, staring out a wall of windows. She watched as a specter wearing a flowing white gown paced back and forth for several minutes across Sibley's top floor.

"I thought to myself, 'Am I imagining this or did this really happen?' And honestly, I believe it really happened," she said.

Norman never saw anything like that again, but then, after that night, she never worked after dark again.

James Evans, president of Lindenwood, said the Sibley sightings, while possible, also might be caused by anxiety or lack of sleep. Either way, he says the stories are a plus for the university.

"It's an interesting part of our tradition here, and they have just enough credibility to keep it on the burner," he said.

A student activity last week kept the folklore going. Ross Allison, president of A.G.H.O.S.T., a paranormal research group based in Seattle, conducted a "Ghostology 101" class and then took students on a ghost hunt at three campus locations. About 200 students attended.

In Sibley chapel, one student said she felt that someone was trying to pull her to the floor, according to a university spokesman. Others on the tour reported hearing unexplained voices and areas that felt colder than normal.

Apparently, no record-keeping of ghost sightings exist, but campus security did get involved a few months ago when Joe Thorpe, the resident director for Cobbs Hall, saw something he couldn't explain.

Thorpe, 26, said he was alone in the dorm during spring break when he heard a sound, like shuffling feet, coming from the room next to his. He checked the bedroom, and everything seemed to be in order, so he headed back to his room.

"When I looked down toward the end of the hallway, there was a figure of a woman in a white dress," he said. "It was nighttime, and I could see the light in the parking lot through her."

He said he stopped, and she looked up, in his direction.

"But she wasn't looking at me, it was almost like she was looking through me," he said. "And then she just faded away."

Thorpe said he was so spooked that he left the building and went to a friend's house off campus. Later, Thorpe talked with Lindenwood security about the incident. He tried to rationalize the sighting as some sort of odd reflection off his glasses, but now he thinks he saw Sibley's ghost. Thorpe said the dorm is on the site of her former garden.

Bryan Farha, professor and director of behavioral studies and counseling at Oklahoma City University, is a skeptic when it comes to ghosts. He said a scientific investigation of these sightings likely would turn up a logical explanation.

"I'm not questioning whether something weird is going on because I think something's going on," he said. "I'm just not ready to conclude that it's of paranormal or supernatural origin."

Sometimes, it's more fun for the students and faculty to keep the superstition going, he said.

Michelle Giessman, 57, the director of student housing, feels that way.

"I would love to think that she's looking out after our students and making sure they're going to class in the morning and doing well," she said. "She embodies everything that a guardian angel should be."

Giessman credits her experience in the late 1990s to Sibley. Newly in charge of housing, Giessman spent a lot of time walking through the dorms over summer break, getting to know the layout of the rooms.

"I went into Sibley Hall one day, and I didn't like how one of the rooms was set up, so I rearranged it, closed the door, and I left," she said.

About two weeks later, she was back in the dorm, and the door was open. Everything was back the way it had been.

About two weeks later, she went back, and the room was rearranged to the original way again, and the door was open. She moved everything, then checked with maintenance and housekeeping. No one knew anything about it. But it happened two more times.

Giessman said about 10 students over the years have asked to be moved out of Sibley Hall, but it's because of the stories, not because they've seen her ghost.

Marsha Parker, 61, a communications professor, has one of those stories. She was in Sibley's chapel in 2003 with an organist working on music for a program. The organist turned around on the bench so they could discuss something.

"Very suddenly, the foot pedal on the organ, several of them actually, moved and made sound," she said, "So the organ essentially started to play without any help at all. We just kind of looked at each other and said, 'Time to go.' "

Parker said she's sure the noise wasn't caused by a key that had gotten stuck.

"You could see the foot pedals weren't really depressed, but the sound was coming from them," she said.

Parker laughs about her experience now, but Thorpe, whose Cobbs Hall encounter is still fresh, says he's a little on edge.

Grave site hunter has visited all of the presidents' cemetery plots

This Halloween, Jerry Garrett of Concord Village plans to be standing at the grave of Roger Stockton in Princeton, N.J. He is on a quest to visit the final resting place of all 56 men who signed the Declaration of Independence on July 4, 1776, and Stockton's tomb will be No. 45.

SLSO has fun with 'Psycho'

Trick or treat: Our Halloween photos and quizzes

See our galleries of prized pumpkins, cute trick or treaters and sexy parties. Find the latest Halloween related events and take some devilsh …

Tuesday October 19, 2010--Michelle Giessman, director of student housing at Lindenwood, stands in the common area of Sibley Hall on the Lindenwood campus in St. Charles. For decades, freshman at Lindenwood University have heard the tales about deceased founder Mary Sibley roaming the campus, Giessman and a few professors and long time staffers say the stories are real. A picture of Mary Sibley can be seen to the right hanging on the wall. This image was made during a 15 second exposure using a flashlight to light the room, the technique is called painting with light. David Carson dcarson@post-dispatch.com