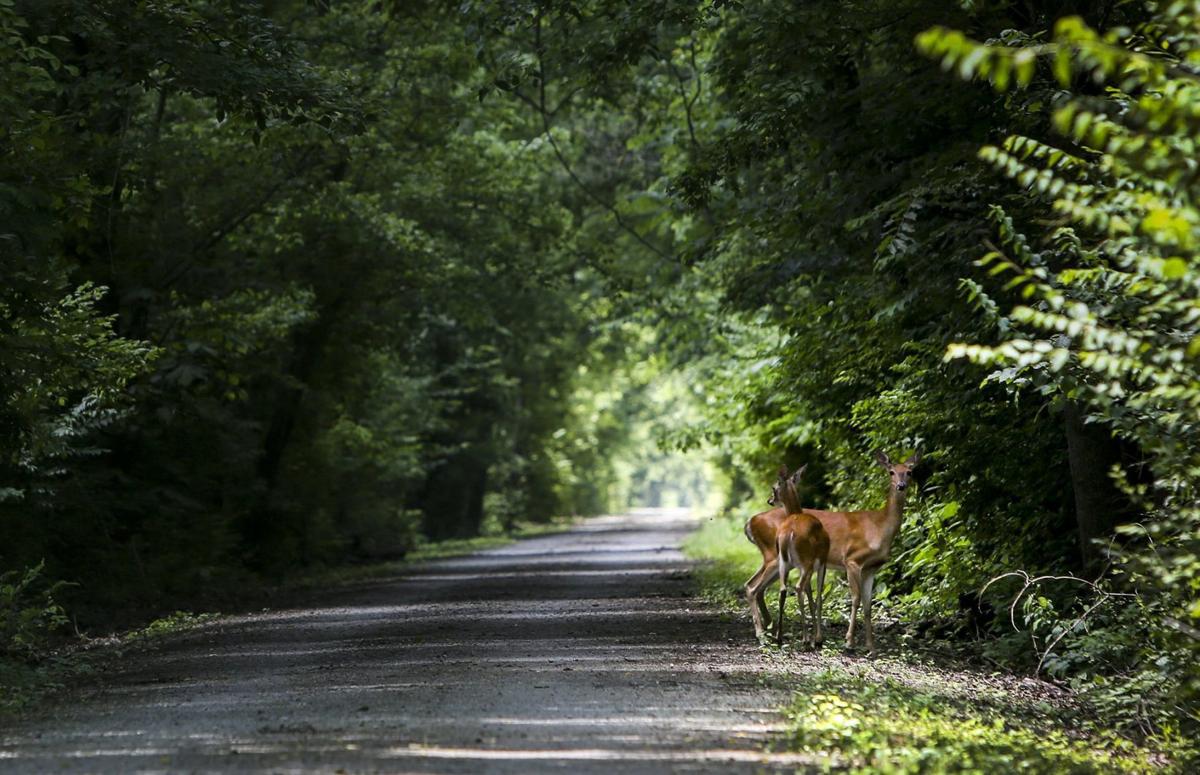 near the planned site for the Missouri Bluffs subdivision on Tuesday, June 18, 2019. Photo by Colter Peterson, cpeterson@post-dispatch.com 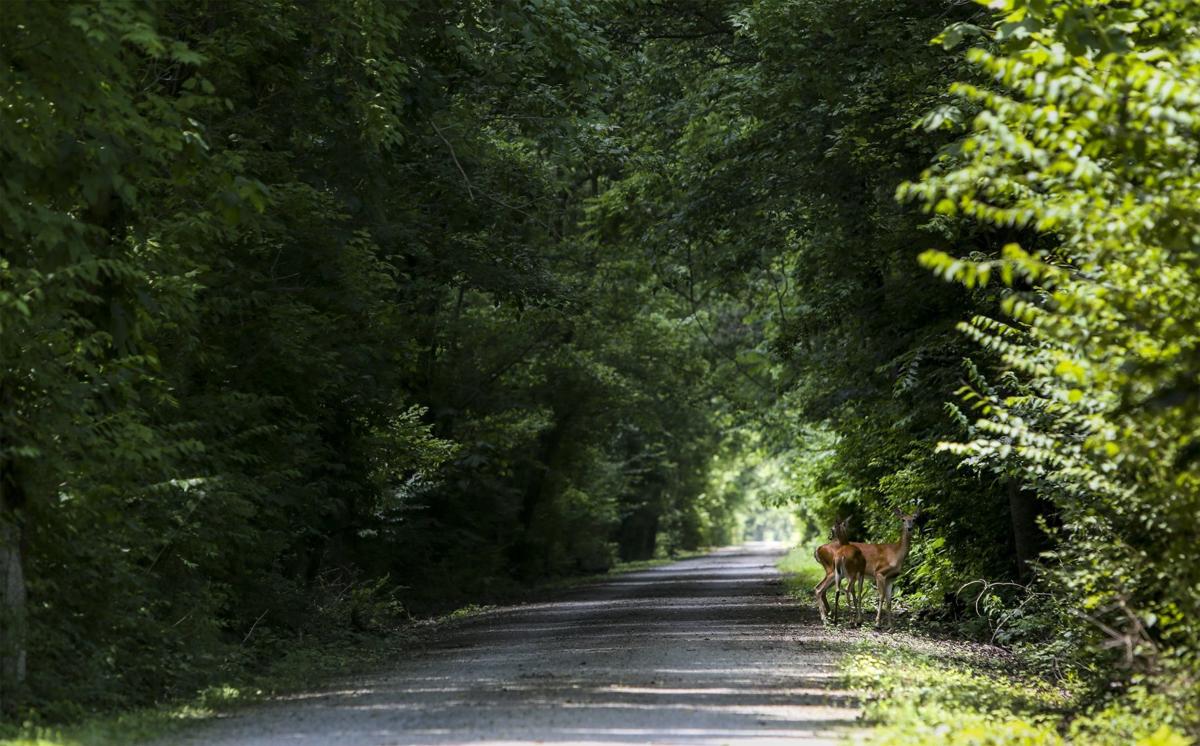 Two deer graze alongside the Katy Trail near the planned site for the Missouri Bluffs subdivision.

Action on a plan to build housing on the Missouri Bluffs near the Katy Trail was delayed Tuesday as environmentalists vowed to continue fighting the project and a recent zoning change they say could worsen the development’s impact.

The St. Charles County Planning and Zoning Commission was scheduled Wednesday to review a layout and lot design plan by developer Greg Whittaker, of NT Builders LLC, to build 140 single-family homes and up to 136 multifamily units on the edge of the Missouri Bluffs Golf Club near Highway 40 (Interstate 64) on public land he plans to buy from the University of Missouri.

Opponents, including some area residents, were expected at the meeting, but the developer requested a delay late Tuesday to gather additional documentation. The commission, which makes recommendations to the St. Charles County Council, now will hear the matter July 17.

Whittaker’s plans were first announced in late 2017. The Sierra Club, Trailnet and other groups blasted the proposal, concerned the subdivision would mar the Missouri Bluffs landscape and detract from the experience of people using the nearby Katy Trail.

The planning and zoning commission, in March 2018, overwhelmingly recommended against the housing plan. But the St. Charles County Council overrode that decision the following June, voting 5-1 to approve Whittaker’s concept plan and rezone the area for the project. The vote was met with a chorus of boos from the crowd of several dozen in the council chambers.

The County Council had twice delayed a final vote to allow the developer to revise the project in response to environmentalists’ concerns, including reducing the number of planned dwellings and setting aside 62 acres between the housing tract and the Katy Trail for conservation.

Brad Goss, attorney for NT Builders, said, “The plan is a development based upon conservation principles that is minimally disturbing the land and is setting a new paradigm for land development in the St. Louis region.”

An environmental group sued St. Charles County to block the development in August but dropped the lawsuit in February.

On Tuesday, the Sierra Club vowed to pack the planning and zoning commission meetings with environmentalists and residents opposed to the project. Adding to their concern were recent changes to a county ordinance that could allow construction on steep hills and bluffs if the planning director approves. The result of that change could mean tearing out trees that help hold up hills, worsening soil erosion and water runoff, said Andy Heaslet, with the Sierra Club.

“This is how a slippery slope is made,” he said. “This change makes it an even more dangerous and damaging plan than what they presented last year.”

Council members Joe Cronin and Mike Elam did not vote in support of the rezoning in June or for the recent ordinance change.

“They’re changing the rules for the entire county for one specific development,” said Cronin, who abstained from the council’s vote giving the project initial approval. “I think that’s a bad precedent.”

He said the change would require steeper streets that would cause environmental and safety issues.

Council member Joe Brazil said their concerns are hypothetical. And should the planning director waive protections for the slope, the ordinance allows for the decision to be appealed to the County Council.

“It’s to the benefit of everyone to leave the slopes as they are,” he said. “You can ‘what if’ every ordinance. If there are any issues we can try to right them.”

Goss, the NT Builders attorney, declined to comment on the ordinance change.

The University of Missouri owned the property as part of the Missouri Research Park that developed along Highway 40 over the last 30 years.

The university received the 8,000 acres for $1 as federal surplus property in 1948. After fulfilling the stipulation that the land be used only for research for 20 years, the university gained the right to sell it. The university has refused to specify the sale price for the property before the sales contract was finalized. A spokesman with the university did not respond Tuesday to requests for comment.

Last month, the university announced it was seeking a public agency to buy roughly 200 acres of bluffs land containing the golf club and an additional 100 adjacent acres just west of Highway 40 in unincorporated St. Charles County that would be preserved and remain open to the public. The university said 46 of those acres along the Katy Trial would be restricted for use as trails and public space.

The golf course is governed by a long-term lease that prevents development for 74 years.

The proposal to build up to 221 residences on the edge of the Missouri Bluffs Golf Club has drawn fierce opposition from environmentalists and residents.

ST. CHARLES — The St. Charles County Council delayed without discussion a final vote Monday on a contested proposal to build up to 221 residen…

near the planned site for the Missouri Bluffs subdivision on Tuesday, June 18, 2019. Photo by Colter Peterson, cpeterson@post-dispatch.com

Two deer graze alongside the Katy Trail near the planned site for the Missouri Bluffs subdivision.