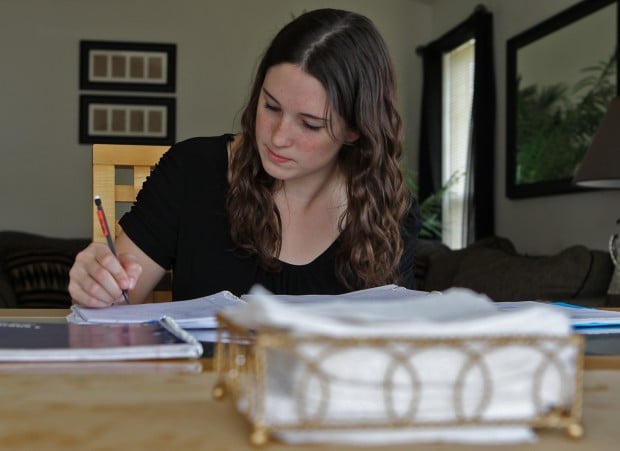 Jessica Rue, 18, works on her math homework at her home in Pevelyon Thursday, Oct. 11, 2012. Rue is going to Jefferson College. Rue nearly died while working as a performer at Creepyworld in Fenton in 2011. Photo by J.B. Forbes, jforbes@post-dispatch.com 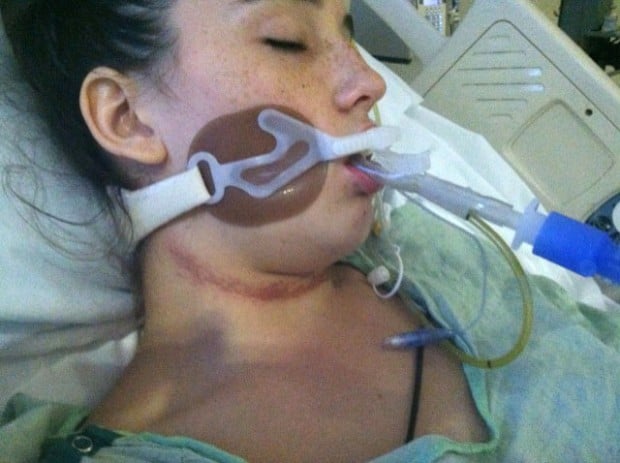 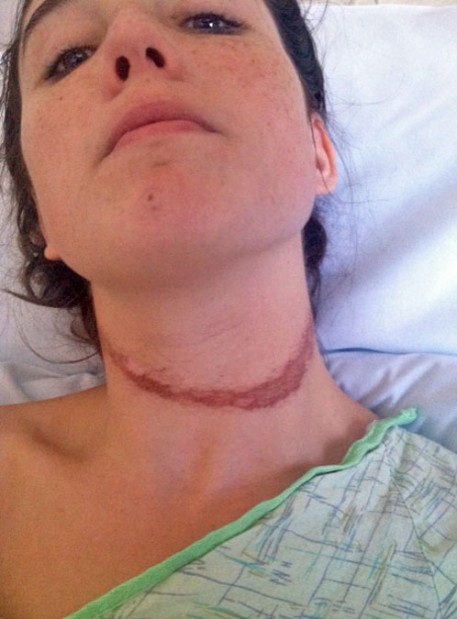 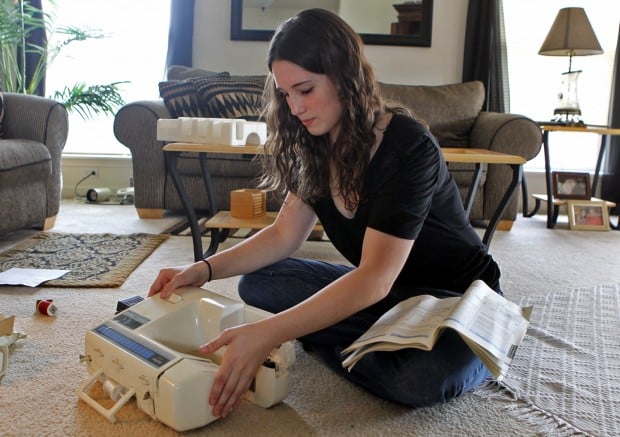 Jessica Rue, 18, tries to figure out how to use a sewing machine at her home in Pevely on Thursday, Oct. 11, 2012. Rue is trying to sew a blanket for her younger sister. Rue nearly died while working as a performer at Creepyworld in Fenton in 2011. Photo by J.B. Forbes, jforbes@post-dispatch.com 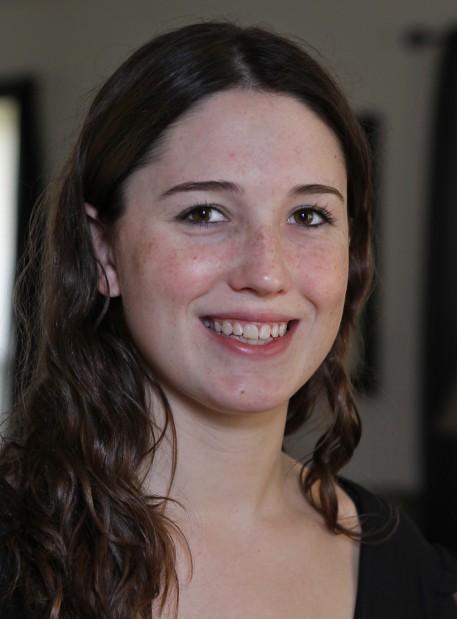 The scar on Jessica Rue’s neck is faint now, a barely noticeable reminder of the noose that choked off oxygen to her brain a year ago while working as an actress at a Fenton-area haunted house.

It happened Oct. 27, on her second day at Creepyworld. Her job was to scare guests as they walked through a bathroom scene that was drenched in fake blood. She wore a white bath towel and dark shorts, according to a Jefferson County Sheriff’s Office report.

The scene included a mangled mannequin and the noose that would end up wrapped around Rue’s neck, putting her in a coma for about three days, according to accounts from police and her family.

Somehow – and exactly how never may be known – the 17-year-old Rue slipped off the edge of the tub and her neck became caught in the noose. Police found shoe prints on the sides of the tub, as well as scuff marks on the wall.

Visitors likely passed by, with no idea Rue was not just another gory prop.

Photos taken after she was cut down show rope burns on her fingers where she tried to pull the noose off her neck. Her dark makeup that was part of her costume was still smeared around her eyes.

Since the accident, she said, her short-term memory is faulty. She suffers from headaches, occasional blackouts, heart flutters and dizzy spells.

In the weeks after she came out of the coma, Rue said, she didn’t realize why she was forced to stay at home to rest.

The extent of her neurological damage is unknown, say her aunts, Nancy Hakala and Annie Hanger. They also say her personality has changed — she gets easily frustrated and sometimes gives curt answers to simple questions. She has had to call for directions on how to get home because she can’t remember the way.

Watching Rue hooked up to a ventilator in the hospital, her aunts first worried whether she’d survive. Then they worried about whether she’d lead a normal life.

“I didn’t think I’d ever have my niece back,” said Hakala, who was Rue’s legal guardian until she turned 18.

They say Rue should not have been left alone while working and that the noose she was given was bolted to the ceiling rather than being a break-away prop.

In January Rue filed a lawsuit against Halloween Productions Inc., the company that owns Creepyworld, and its owner, Larry Kirchner. Kirchner declined to comment for this story.

Rusbarsky, who was 17 at the time, was described in the sheriff’s report as Rue’s “area supervisor,” and Israelsen was the maintenance worker checking electrical connections who cut Rue down from the noose and performed CPR, the report says.

The suit says Rue hung from the noose for 2 to 10 minutes, and that she wasn’t breathing and had no pulse when Israelsen cut her down.

The suit says Kirchner, Rusbarsky and Israelsen were negligent and created a dangerous condition by encouraging the actors, including Rue, to use the noose as a prop to scare patrons and did not “keep a careful watch” on Rue to ensure her safety.

Rick Barry, Rue’s attorney, said Rue is not seeking a specific amount of damages because her medical expenses will continue to accrue.

Rue receives Medicaid benefits but will lose them in May when she turns 19.

The Occupational Safety and Health Administration launched an investigation at Creepyworld the day after Rue became trapped in the noose, according to an agency report.

The federal agency found three serious violations related to fire extinguishers and “wiring methods, components and equipment for general use.” Details of the violations were not available. Halloween Productions Inc. was assessed an initial penalty of $10,500, but it was also unclear whether that penalty was later modified.

Rue was a senior at Fox High School when the accident happened. She returned to school in January, a scarf wrapped around her neck to hide the gash from the noose. She made up the work she had missed and graduated with her class last spring. She attends Jefferson College part time and also works as a waitress. She makes sure to write down her assignments, or she forgets to do them. And she has lost her balance at work, once hitting her shoulder on a doorway.

The billboards and other advertisements for the attraction don’t bother her, she said, because she doesn’t remember anything that happened there.

Creepyworld’s website says visitors will spend more than an hour to go through the whole attraction, encountering more than 100 “live monsters, zombies, and the mutated dead who will stalk you, chase you, and make you SCREAM!”

At auditions last month before the haunted house opened, a group of mostly teens waited around a nearby parking lot and filled out applications.

Mitchem said she loved Halloween and thought it would be fun to scare people.

Hall worked at Creepyworld last year and said what happened to Rue didn’t scare her:

“I’m careful about what I’m doing.”

No one is saying the district has reached its end goal, but academics are improving.

Five questions with Ed Brock, the wizard of Halloween

The man behind Johnnie Brock's Dungeon Costumes is expecting a 12 to 15 percent increase in sales this Halloween.

Jessica Rue, 18, works on her math homework at her home in Pevelyon Thursday, Oct. 11, 2012. Rue is going to Jefferson College. Rue nearly died while working as a performer at Creepyworld in Fenton in 2011. Photo by J.B. Forbes, jforbes@post-dispatch.com

Jessica Rue, 18, tries to figure out how to use a sewing machine at her home in Pevely on Thursday, Oct. 11, 2012. Rue is trying to sew a blanket for her younger sister. Rue nearly died while working as a performer at Creepyworld in Fenton in 2011. Photo by J.B. Forbes, jforbes@post-dispatch.com