CHICAGO — One of America’s leading pig slaughterhouses is running faster than ever as meatpackers hustle to keep pork in grocery stores during the COVID-19 pandemic. Plant worker Hector Ixquier says it’s time to slow down.

Ixquier said he sought medical treatment in January for tendons he strained in his right arm while draining blood from pigs in a Seaboard Foods pork plant in Guymon, Oklahoma.

The 30-year-old immigrant from Guatemala said he requested a transfer to the position piercing jugular veins about five months ago, after an increase in slaughtering speeds made it too tiring to do his previous job: wrestling chains around pigs’ hind legs before they are killed.

His new job is also physically taxing, and a doctor recommended rest and avoiding certain tasks at work, Ixquier said in an interview. “I’m thankful for the opportunity,” he said of the new gig, “but it’s still too fast.”

Seaboard, the second-biggest U.S. pig producer after Smithfield Foods, sped up its Guymon operations last year after the U.S. government removed limits on pork plant line speeds in late 2019. It was the first plant to operate under the new rule, which was intended to allow processors to produce meat more quickly.

But some workers, like Ixquier, say they have suffered physically as a result. Seaboard now requires employees to slaughter between about 1,230 and 1,300 hogs per hour, two plant workers who are also union stewards told Reuters. That compares to under 1,100 an hour in 2019, said one of the workers, Jose Quinonez.

Workers and their advocates say the rule change is part of a series of measures finalized by former President Donald Trump’s administration that jeopardize employee safety, including exempting dozens of poultry plants from slower line speeds and re-opening plants battling COVID-19. The changes, and prevalence of COVID-19 at slaughterhouses, have made it harder to keep workers in their jobs at a time when U.S. companies are trying to build up meat supplies.

Seaboard, which didn’t respond to questions about Ixquier, said employee health is a top priority. The company, a subsidiary of Kansas-based Seaboard Corp., works to improve processes and equipment and hires additional employees to help ensure each worker’s load is manageable and safe, said Seaboard spokesman David Eaheart.

Eaheart added that the rule relaxing pork line speed limits improves Seaboard’s ability to adjust operations based on demand. Seaboard aims to average 1,200 pigs per hour under normal conditions, but has adjusted speeds as the pandemic has reduced staffing, he said. The company needs to examine how the plant will work under non-COVID-19 conditions to “truly understand” how the change affects it business, Eaheart said.

Under the new rule, pork plants can slaughter as fast as they want, as long as they prevent fecal contamination and minimize bacteria. Previously, the government-imposed limit was 1,106 pigs per hour.

President Joe Biden’s administration, which pledges to prioritize worker safety, withdrew a Trump era proposal to allow all poultry plants to operate faster. But reversing the pork rule would be trickier, lawyers said, because it is already in effect.

The 2019 elimination of pork line speeds by the U.S. Department of Agriculture (USDA) was part of the New Swine Inspection System, which also lets pork plants use some company inspectors instead of USDA ones.

The USDA said that it isn’t considering a rollback of its elimination of pork line speeds. But it said the agency is “closely examining” how the new pork inspection system was developed.

The White House did not respond to questions about line speeds.

Slaughterhouse closures due to outbreaks last spring, record-large U.S. pork exports in 2020 and consumers stockpiling food during the pandemic have run down inventories in commercial freezers across the United States. Total U.S. pork inventories in cold storage were at a ten-and-a-half year low at the end of December.

Guymon, a city of about 11,000 people, is dominated by the Seaboard pork plant. Last March, it became the first slaughterhouse to operate under the new rule, according to USDA documents. Prior to the rule change, six other major U.S. pork plants had surpassed the previous slaughter speed limits with special USDA permission, the agency documents show. The USDA told Reuters that the slaughterhouses had demonstrated they were capable of producing safe pork while operating at faster speeds.

Seaboard’s plans to increase line speeds predated the coronavirus pandemic. Its decision to go ahead coincided with the mass spread of COVID-19 in the United States. Hundreds of the slaughterhouse’s 2,700 employees were infected.

Seaboard spokesman Eaheart said the company wanted to operate faster to reduce the number of six-day work weeks for employees and give them more rest. However, lower staffing levels due to the pandemic forced the company at times to slow line speeds and to require employees to work on Saturdays, he said.

The local United Food and Commercial Workers International union representing Guymon workers said it has seen a correlation between speeding up the lines and more workers going to the plant’s nurse’s station. It declined to provide figures.

Company data show an uptick in injuries. The Seaboard plant in 2020 reported five lacerations on the slaughtering floor that required paid medical treatment outside of the plant such as stitches, a three-year high, according to the company. That compares to one laceration claim in 2019, zero in 2018, and five in 2017.

The plant also saw an increase in less-serious cuts that did not require outside medical attention, the company said. The number of these incidents, which can include minor cuts treated with adhesive bandages, jumped to 19 last year from 10 in each of the prior two years.

Seaboard says its overall injury rate is well below the Bureau of Labor Statistics’ industry standard for animal slaughtering and processing.

Nationwide, inspections of serious incidents at meat plants rose last year. The Occupational Safety and Health Administration (OSHA) conducted 27 inspections at non-poultry meat plants in 2020 due to either a “fatality” or a “catastrophe,” up from one in 2017, three in 2018 and five in 2019, OSHA data shows.

The UFCW in 2019 filed a lawsuit against the USDA in Minnesota federal court seeking to reverse the pork speed rule change, alleging it is unsafe for workers. The USDA said in court filings that the union did not show a direct link between workers’ alleged injuries and the rule change. The lawsuit is ongoing.

‘Production has to go on’

More pork plants are planning to opt into the system, which eliminates speed limits.

Meat giant Tyson Foods Inc. notified the USDA it intends over the next several months to resume implementation of the system at plants in Madison, Nebraska, and Perry, Iowa. Tyson had paused plans to opt in last year because of the pandemic, spokeswoman Liz Croston said. Tyson is focused on modernizing inspections, not line speeds, she said, and does not anticipate “immediate significant change” to its slaughter capacities.

At Seaboard’s Guymon plant, UFCW steward Quinonez told Reuters he transferred to a job slicing skin off hog heads last year. The faster line speeds had left him unable to keep up with his former gig: scraping hair and skin off tongues. A 13-year employee at the plant, he said the speed increase worsened pain in his hands and shoulders that he’d experienced in his former job. He now reports back problems as well.

If Seaboard needs to pause production because of a mechanical problem or other glitch, the plant later runs even faster to make up for the halt, he said. “At the end of the day, the production has to go on — no matter what,” Quinonez said.

A former U.S. Olympics gymnastics coach with ties to Larry Nassar died by suicide Thursday after being charged with two dozen crimes, including forms of human trafficking.

An SUV believed to be carrying 27 people crashed Tuesday into a semitruck in Southern California, killing 15 people and leaving others injured, hospital officials said.

'Do you miss me yet?' Trump calls for GOP unity, blasts Biden, repeats false election claims

In his first return to the stage since leaving office, Donald Trump used his CPAC speech to try to cement his status as the Republican Party's undisputed leader.

Johnson and Johnson’s single-dose vaccine is poised for approval after U.S. regulators find it protects against COVID-19 and is safe. Get the latest.

A N.Y. prosecutor has obtained copies of Donald Trump's tax records after the Supreme Court rejected the former president's last-ditch effort to prevent them from being handed over.

The House approved a $1.9 trillion pandemic relief bill early Saturday that includes $1,400 direct payments to Americans and a minimum wage hike. It now moves to the Senate.

US health officials warn against reopening too quickly as virus variants spread. “We stand to completely lose the hard-earned ground that we have gained,” said Dr. Rochelle Walensky, head of the CDC.

Amid pandemic, flu has virtually disappeared in the US; Pfizer studying 3rd dose to fight variants 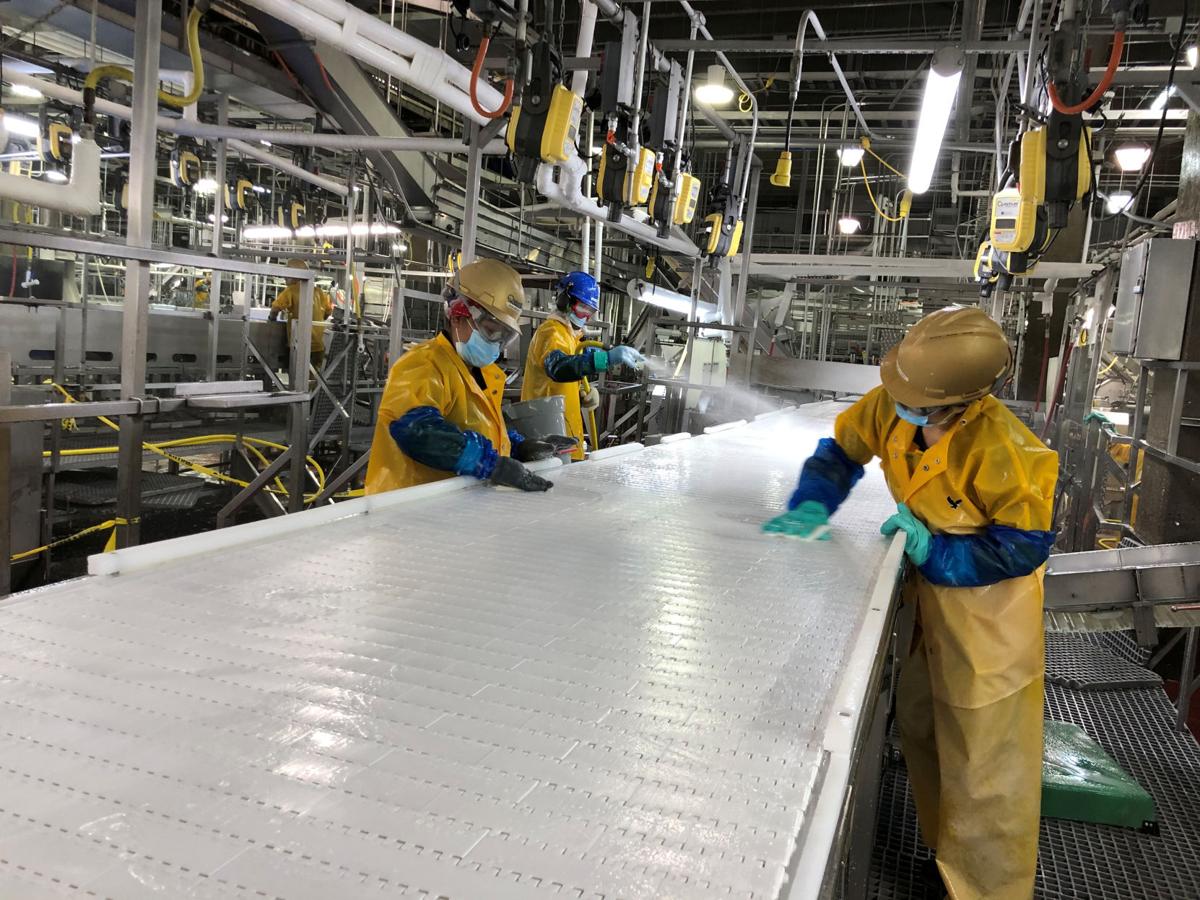 Workers disinfect a conveyor belt, part of the measures installed to help slow the spread of coronavirus disease (COVID-19) at the Seaboard Foods pork processing plant in Guymon, Oklahoma, on May 17, 2020. Seaboard Foods/Handout via REUTERS 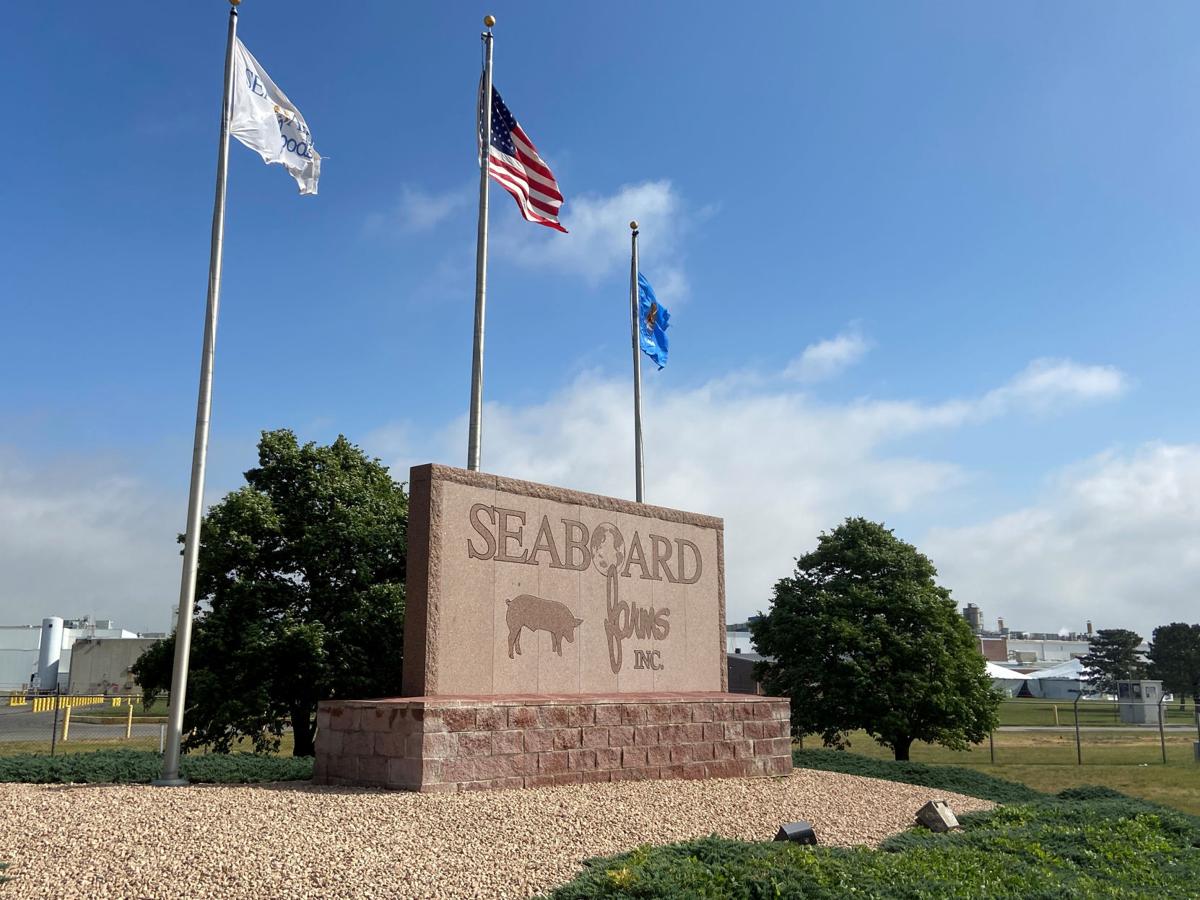 The logo of Seaboard Foods hog processing plant is seen in Guymon, Oklahoma, on May 13, 2020.  REUTERS/Andrew Hay/File Photo 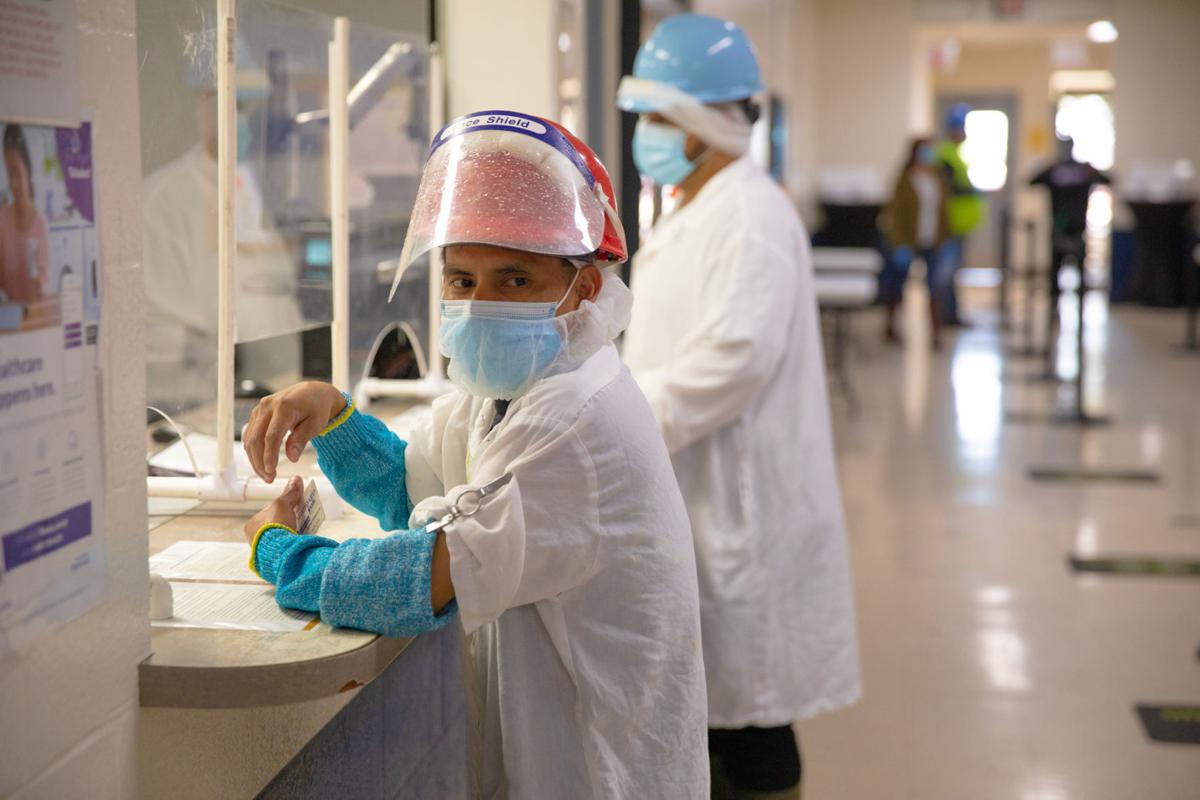 Plexiglass windows are seen at the human resources desk, part of the measures installed to help slow the spread of coronavirus disease (COVID-19) at the Seaboard Foods pork processing plant in Guymon, Oklahoma, on May 8, 2020. Seaboard Foods/Handout via REUTERS. 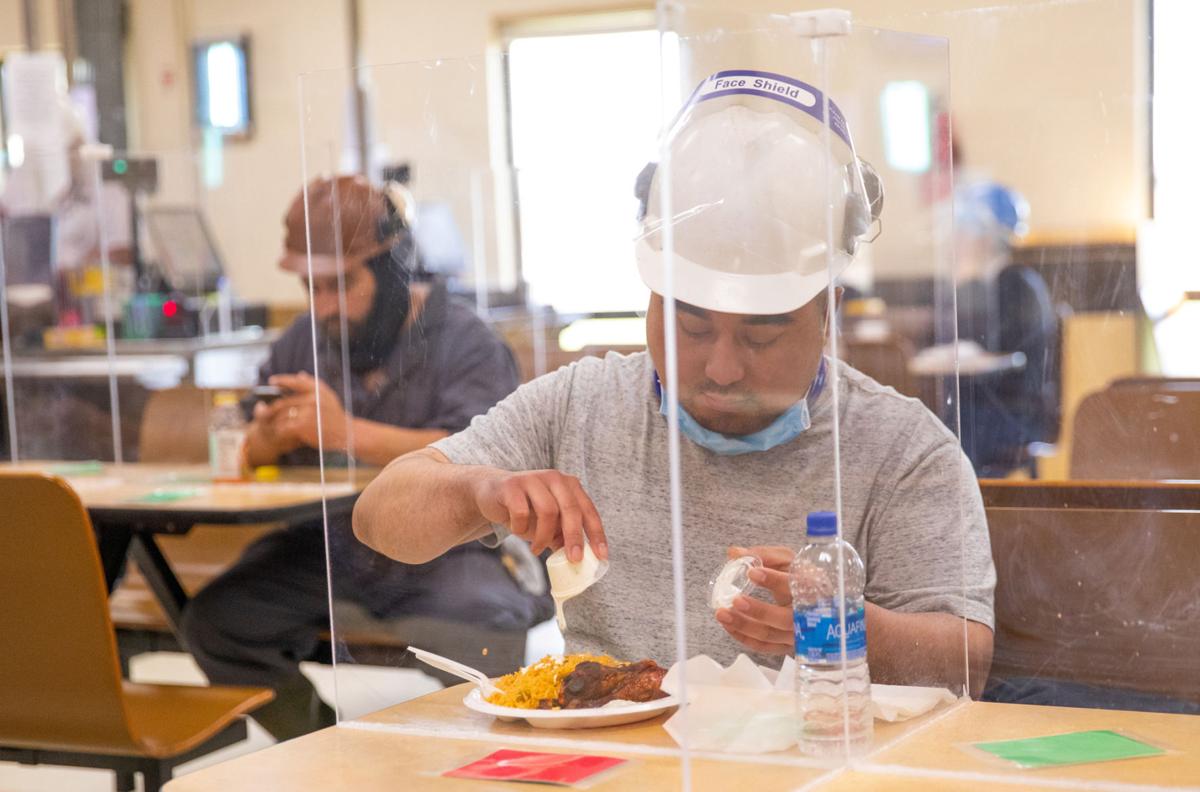 Plexiglass dividers surround a worker eating at the cafeteria, part of the measures installed to help slow the spread of coronavirus disease (COVID-19) at the Seaboard Foods pork processing plant in Guymon, Oklahoma, on May 8, 2020. Seaboard Foods/Handout via REUTERS.