Keep scrolling for today's top stories, this date in history and celebrity birthdays.

BERLIN (AP) — At least 100 people have died in devastating floods across parts of western Germany and Belgium, officials said Friday, as rescue operations and the search for hundreds still unaccounted for continued.

Authorities in the German state of Rhineland-Palatinate said 50 people had died there, including at least nine residents of an assisted living facility for people with disabilities. In neighboring North Rhine-Westphalia state officials put the death toll at 43, but warned that the figure could rise further.

Rescuers were rushing Friday to help people trapped in their homes in the town of Erftstadt, southwest of Cologne. Regional authorities said several people had died after their houses collapsed due to subsidence, and aerial pictures showed what appeared to be a massive sinkhole.

Schumer, D-N.Y., said Thursday he was scheduling a procedural vote for next Wednesday to begin debate on a still-evolving bipartisan infrastructure bill. Senators from both parties, bargaining for weeks, have struggled to reach final agreement on a $1 trillion package of highway, water systems and other public works projects.

Schumer said he also wanted Democratic senators to reach agreement among themselves by then on specific details of a separate 10-year budget blueprint that envisions $3.5 trillion in spending for climate change, education, an expansion of Medicare and more.

SANDWICH, England (AP) — Jordan Spieth rolled in putts like it was 2017. Louis Oosthuizen put those runner-up finishes in the last two majors out of mind and soared to the top of the leaderboard. They gave the British Open a familiar feel on Thursday.

Normalcy returned to the wind-swept links at Royal St. George’s in other ways, too.

The roars and cheers of the biggest golf crowd since the pandemic rumbled around this quirky course off Sandwich Bay, just like pre-COVID times.

Spieth was a shot off the lead held by Oosthuizen, who saved par from a fairway bunker on No. 18 for a 6-under 64. That tied the lowest opening round at Royal St. George’s, previously set by Christy O’Connor Jr. in 1981.

Click on the links below for full version of today's top stories. Keep scrolling for a look back at this day in history and today's celebrity birthdays:

BERLIN (AP) — At least 100 people have died in devastating floods across parts of western Germany and Belgium, officials said Friday, as rescue operations and the search for hundreds still unaccounted for continued.

SANDWICH, England (AP) — Jordan Spieth rolled in putts like it was 2017. Louis Oosthuizen put those runner-up finishes in the last two majors out of mind and soared to the top of the leaderboard. They gave the British Open a familiar feel on Thursday.

SURFSIDE, Fla. (AP) — Efforts to recover human remains from the debris of a South Florida condo building are nearing an end.

PORTLAND, Ore. (AP) — Firefighters scrambled Friday to control a raging inferno in southeastern Oregon that’s spreading miles a day in windy conditions, one of numerous wildfires across the U.S. West that are straining resources.

Fully vaccinated Americans may enter Canada as of mid-August

TORONTO (AP) — Prime Minister Justin Trudeau said on Thursday Canada could start allowing fully vaccinated Americans into Canada as of mid-August for non-essential travel and should be in a position to welcome fully vaccinated travelers from all countries by early September.

'Boy Next Door Killer' gets death for murders of 2 women

LOS ANGELES (AP) — For crimes he called “vicious and frightening,” a judge on Friday gave a death sentence to a man prosecutors called “The Boy Next Door Killer” for the home-invasion murders of two women and the attempted murder of a third.

SEATTLE (AP) — A judge ordered former Seattle Seahawks and San Francisco 49ers star Richard Sherman released from jail without bail Thursday following his arrest on suspicion of trying to break in to his in-laws’ home.

WASHINGTON (AP) — Welcoming Angela Merkel to the White House for a final time, President Joe Biden renewed his concerns to the German chancellor Thursday about a major, nearly complete Russia-to-Germany gas pipeline but said they agreed Russia must not be allowed to use energy as a weapon.

Florida Gov. Ron DeSantis and other officials pressed the White House on Thursday to support efforts to preserve internet service to antigovernment protesters in Cuba, even advocating the use of giant balloons as floating Wi-Fi hotspots to allow images of dissent to stream unabated from the authoritarian nation.

WASHINGTON (AP) — President Joe Biden said Thursday that the U.S. will bolster security at its embassy in Haiti following last week's assassination of that country's president, but sending American troops to stabilize the country was “not on the agenda.”

Cuomo to be questioned in sexual harassment investigation

ALBANY, N.Y. (AP) — New York Gov. Andrew Cuomo is expected to be interviewed Saturday as the state attorney general's office winds down its investigation into sexual harassment and misconduct allegations that upended his national reputation and threatened his hold on power as he gears up to run for a fourth term next year.

FLAGSTAFF, Ariz. (AP) — One person who went missing from a Colorado River rafting trip in the Grand Canyon during a flash flood was found dead Thursday in frigid water while a second person was found alive, a park spokeswoman said.

IMAGE OF THE DAY

In 1969, Apollo 11 blasted off from Cape Kennedy on the first manned mission to the surface of the moon, and more events that happened on this…

In 1947, Rocky Graziano scores a technical knockout with a barrage of 30 punches against Tony Zale in the sixth round to win the world middlew…

Biden runs out of ceremonial pens at bill signing

Here's what to know about COVID-19 "breakthrough" cases. Should Americans be concerned? What are health experts watching for?

Capitol rioter who breached Senate sentenced to 8 months in prison

A Florida man gets eight months in prison in the first sentencing for a felony charge stemming from the Jan. 6 Capitol insurrection.

COVID-19 drives down US life expectancy; Olympics will return to Australia in 2032; Bucks celebrate long-awaited NBA title. Plus, western fires cause eastern haze. Get caught up.

US vaccinations rising again as official declares: 'The fourth surge is real.'

Vaccination rates are rising in some states where new COVID-19 cases are soaring. Get the latest on the delta variant, rare "breakthrough" cases, and find answers to 5 key questions about the persisting pandemic.

House Speaker Nancy Pelosi is rejecting two Republicans tapped to sit on a committee investigating the Jan. 6 Capitol insurrection, citing the "integrity" of the probe.

CDC: Delta variant accounts for 83% of US cases, a dramatic increase. Get the latest.

Health officials say the delta variant of the coronavirus continues to surge and accounts for an estimated 83% of U.S. COVID-19 cases. Track the latest numbers here.

Cleveland's baseball team will change name from Indians to Guardians

Known as the Indians since 1915, Cleveland's Major League Baseball team will be called Guardians, the club announced Friday.

A 13-year-old girl was hit in the face by a seagull while riding an amusement park ride in New Jersey. Here's video courtesy of the Press of Atlantic City. 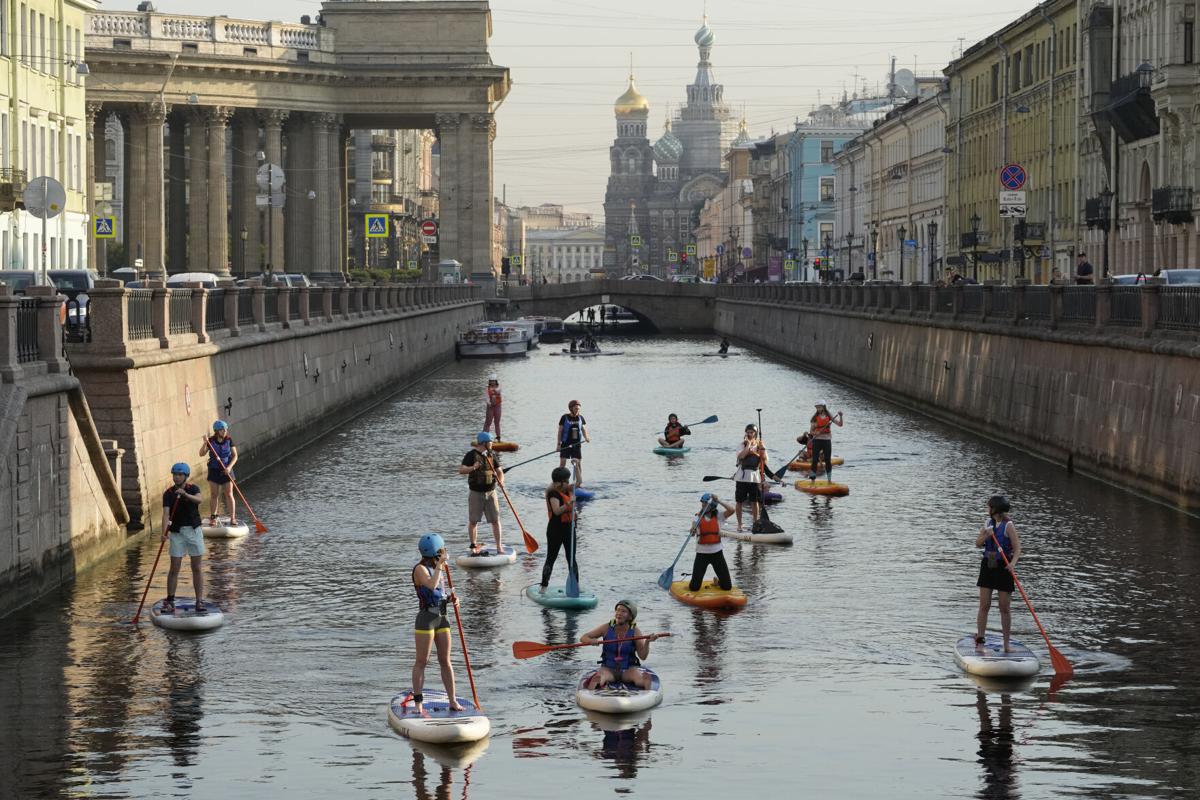 People steer their SUP-Boards in central St. Petersburg, Russia, early Thursday, July 15, 2021. People are permitted to use rowing boats and SUP boards on the rivers and canals of St. Petersburg in the early morning when floating on motorboats are prohibited. 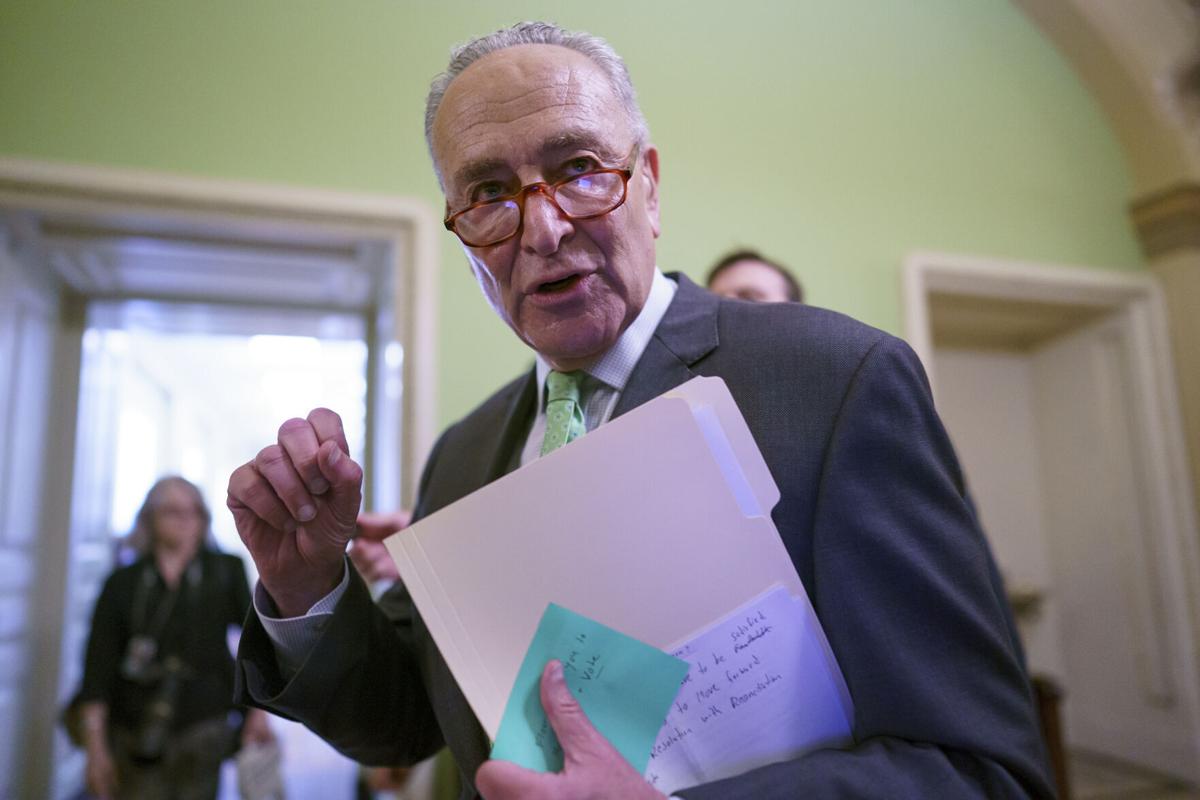 Senate Majority Leader Chuck Schumer, D-N.Y., talks to reporters as he leaves a news conference at the Capitol in Washington, Thursday, July 15, 2021. Schumer is scheduling a procedural vote for next Wednesday to begin debate on a still-evolving bipartisan infrastructure bill. 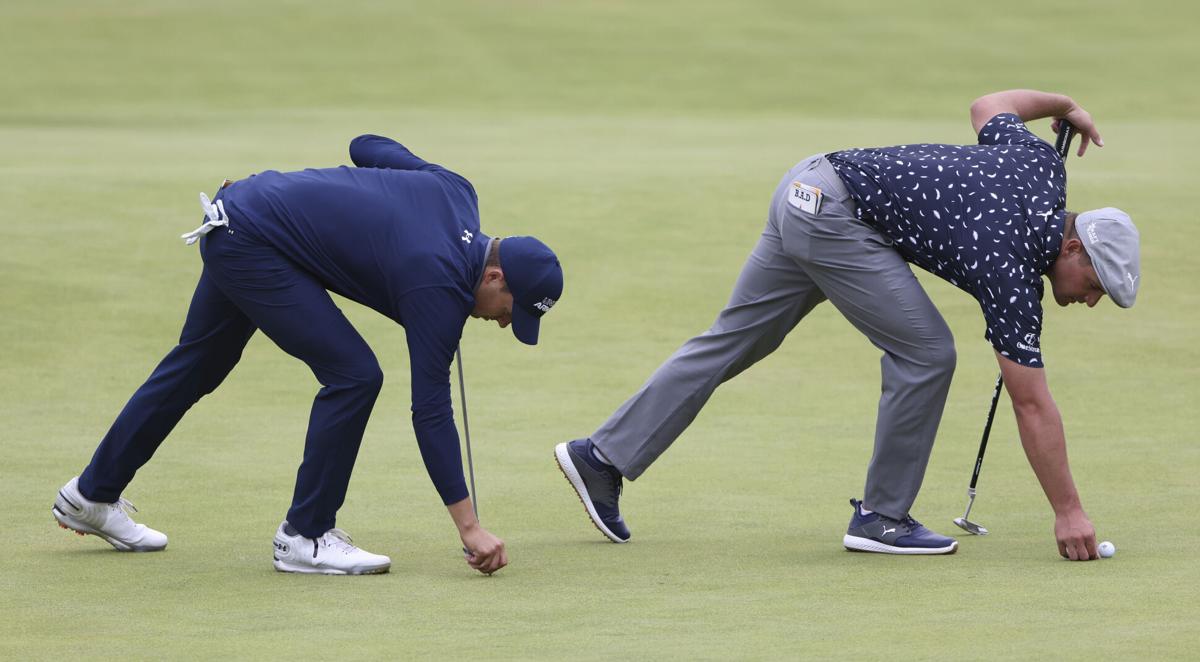 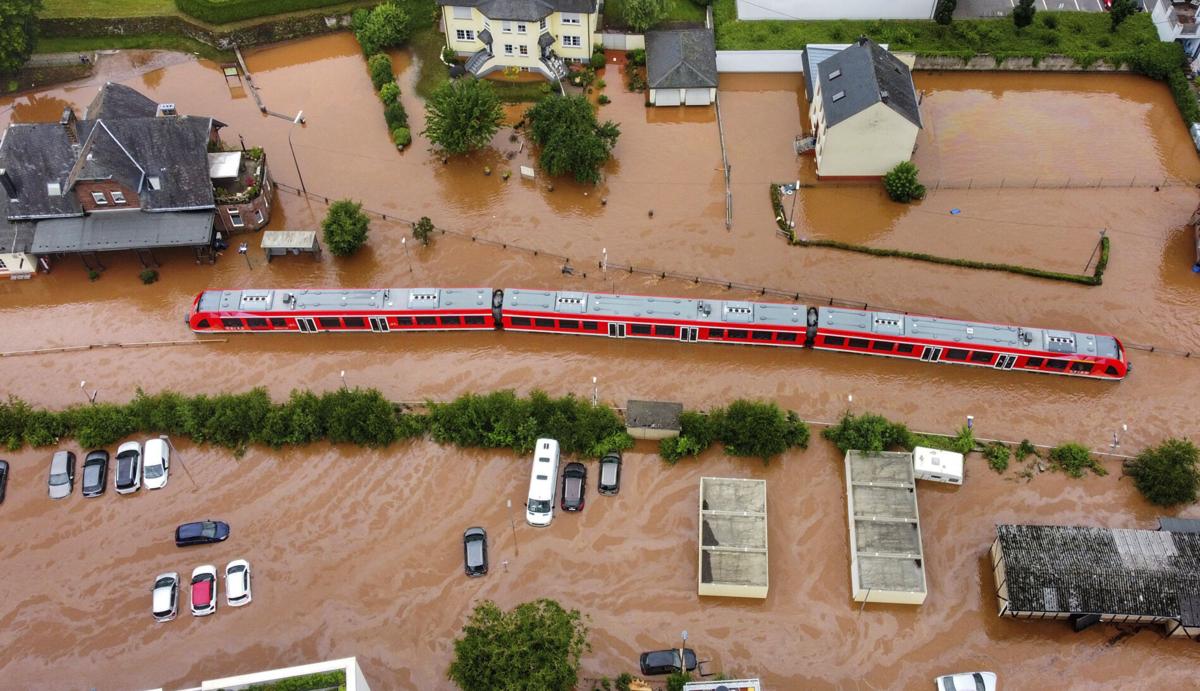 A regional train sits in the flood waters at the local station in Kordel, Germany, Thursday July 15, 2021 after it was flooded by the high waters of the Kyll river.