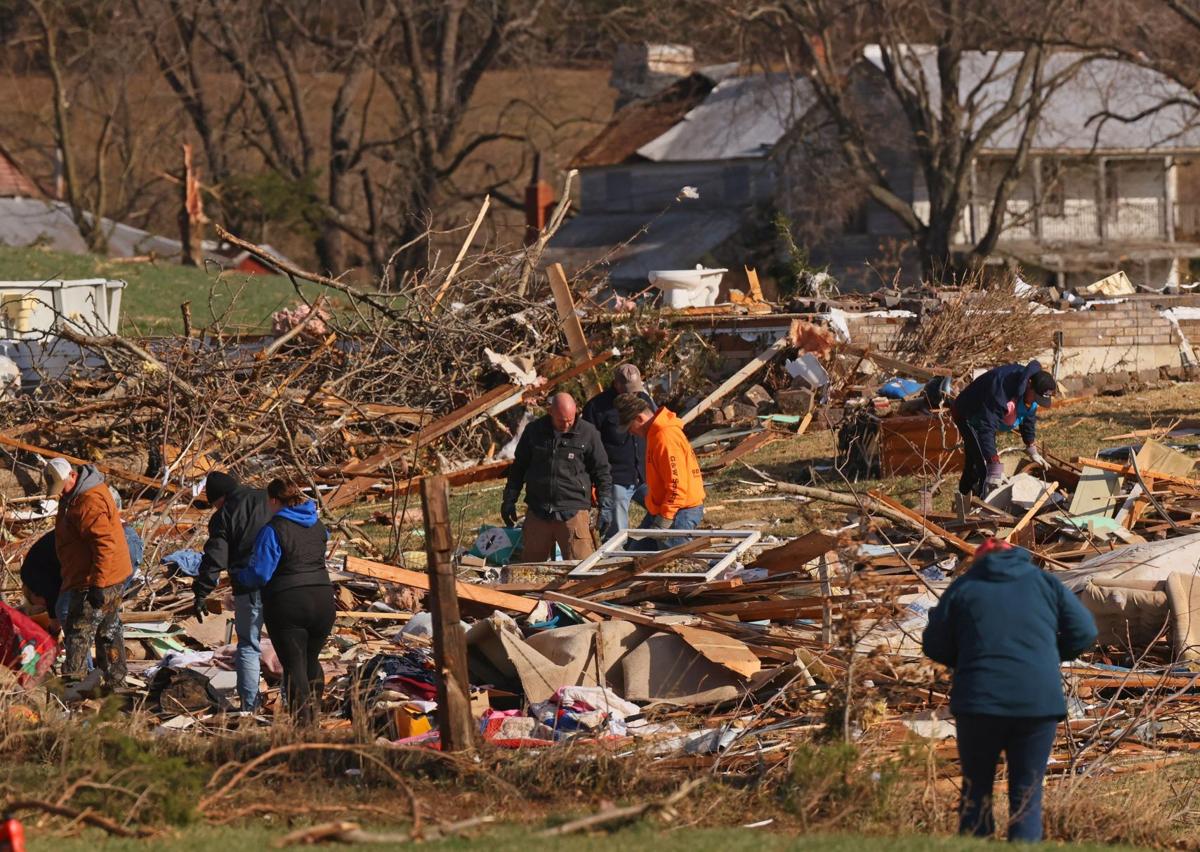 Friends and family search amidst remnants for valuables at the Defiance home of Ollie and Vernon Borgmann on Saturday, December 11, 2021 on Highway F in that was destroyed by a possible tornado. Photo by Christian Gooden, cgooden@post-dispatch.com 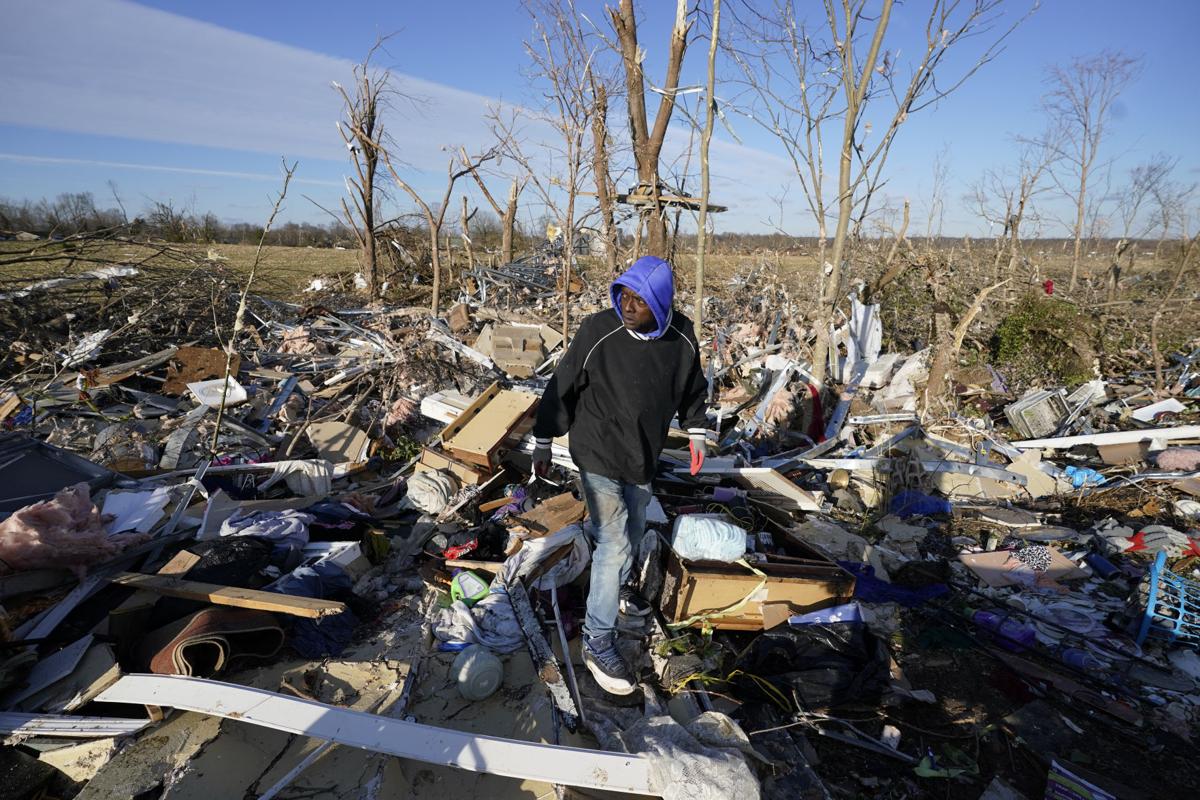 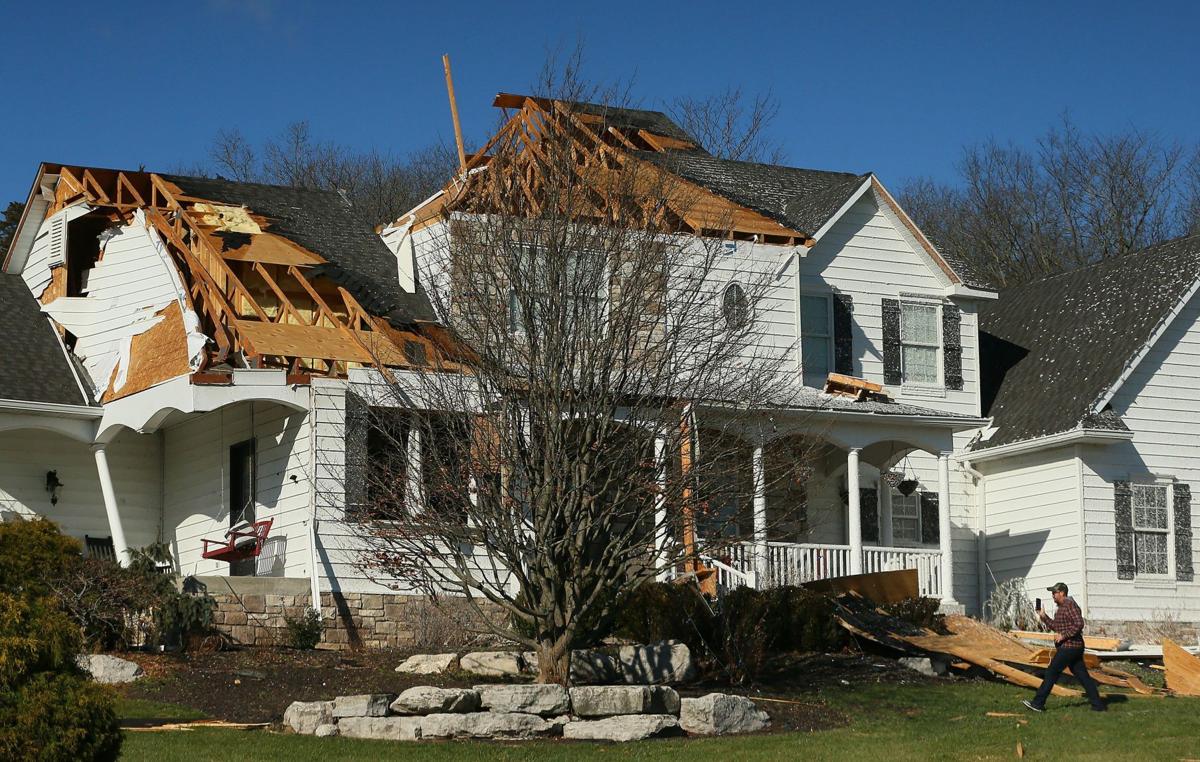 A home on a street off Highway F in Defiance shows severe damage on Saturday, December 11, 2021, as several buildings and homes in the area were affected by a possible tornado Friday night. Photo by Christian Gooden, cgooden@post-dispatch.com 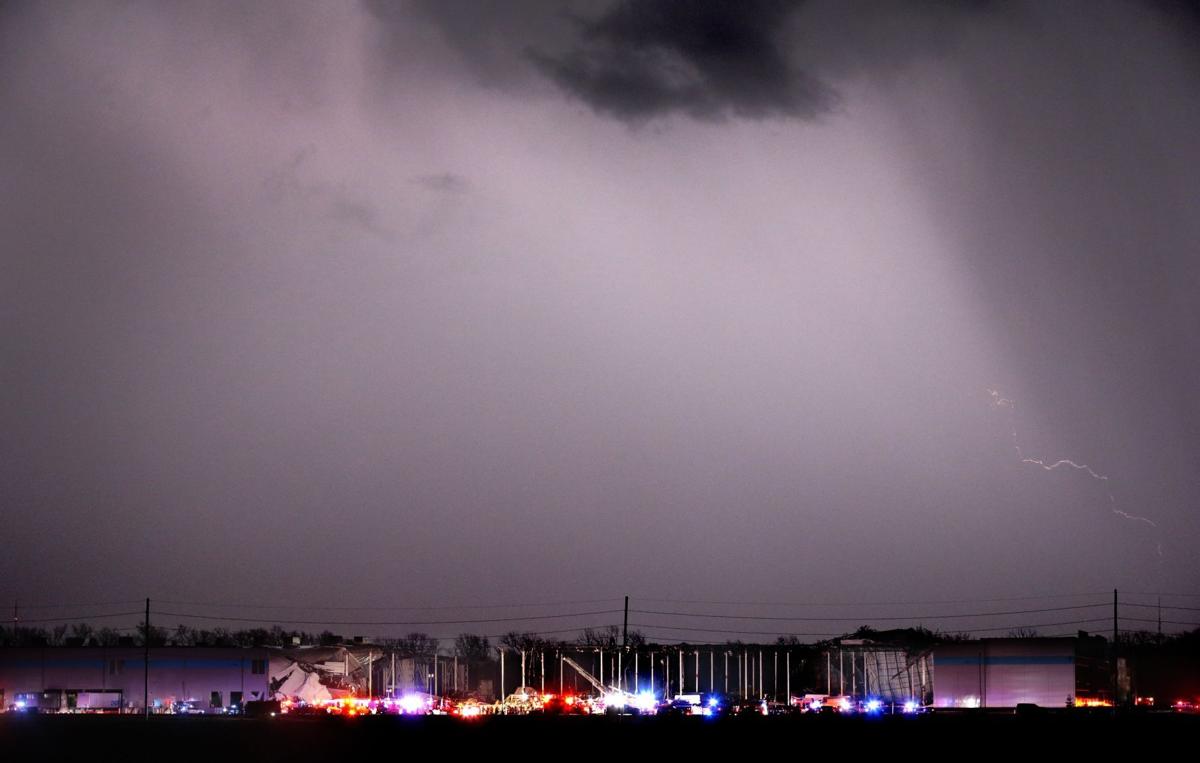 Lightning strikes over the Amazon distribution center in Edwardsville after a first wave of storms partially collapsed the building after being hit a tornado on Friday, Dec. 10, 2021. Photo by Robert Cohen, rcohen@post-dispatch.com

WASHINGTON — The calendar said December but the warm moist air screamed of springtime. Add an eastbound storm front guided by a La Nina weather pattern into that mismatch and it spawned tornadoes that killed dozens over five U.S. states.

Tornadoes in December are unusual, but not unheard of. But the ferocity and path length of Friday night’s tornadoes likely put them in a category of their own, meteorologists say. One of the twisters — if it is confirmed to have been just one — likely broke a nearly 100-year-old record for how long a tornado stayed on the ground in a path of destruction, experts said.

“One word: remarkable; unbelievable would be another,” said Northern Illinois University meteorology professor Victor Gensini. “It was really a late spring type of setup in in the middle of December.”

Warm weather was a crucial ingredient in this tornado outbreak, but whether climate change is a factor is not quite as clear, meteorologists say.

Scientists say figuring out how climate change is affecting the frequency of tornadoes is complicated and their understanding is still evolving. But they do say the atmospheric conditions that give rise to such outbreaks are intensifying in the winter as the planet warms. And tornado alley is shifting farther east away from the Kansas-Oklahoma area and into states where Friday’s killers hit.

Here’s a look at what’s known about Friday’s tornado outbreak and the role of climate change in such weather events.

What causes a tornado?

Tornadoes are whirling, vertical air columns that form from thunderstorms and stretch to the ground. They travel with ferocious speed and lay waste to everything in their path.

Thunderstorms occur when denser, drier cold air is pushed over warmer, humid air, conditions scientists call atmospheric instability. As that happens, an updraft is created when the warm air rises. When winds vary in speed or direction at different altitudes — a condition known as wind shear — the updraft will start to spin.

These changes in winds produce the spin necessary for a tornado. For especially strong tornadoes, changes are needed in both the wind’s speed and direction.

“When considerable variation in wind is found over the lowest few thousand feet of the atmosphere, tornado-producing ‘supercell thunderstorms’ are possible,” said Paul Markowski, professor of meteorology at Pennsylvania State University. “That’s what we had yesterday.”

There’s usually a lot of wind shear in the winter because of the big difference in temperature and air pressure between the equator and the Arctic, Gensini said.

But usually, there’s not a lot of instability in the winter that’s needed for tornadoes because the air isn’t as warm and humid, Gensini said. This time there was.

What conditions led to storms of this scale?

A few factors, which meteorologists will continue to study.

Spring-like temperatures across much of the Midwest and South in December helped bring the warm, moist air that helped form thunderstorms. Some of this is due to La Nina, which generally brings warmer than normal winter temperatures to the Southern U.S. But scientists also expect atypical, warm weather in the winter to become more common as the planet warms.

Once the storm formed, exceptionally strong wind shear appears to have prevented the tornadoes from dissipating, experts say. Tornadoes are thought to die off when thunderstorm updrafts lose energy.

Tornadoes typically lose energy in a matter of minutes, but in this case it was hours, Gensini said. That’s partly the reason for the exceptionally long path of Friday’s storm, going more than 200 miles (322 kilometers) or so, he said. The record was 219 miles (352 kilometers) and was set by a tornado that struck four states in 1925. Gensini thinks this one will surpass it once meteorologists finish analyzing it.

“In order to get a really long path length, you have to have a really fast moving storm. This storm was moving well over 50 miles (80 kilometers) per hour for a majority of its life,” Gensini said. That’s not the speed of the winds, but of the overall storm movement.

How related is climate change to tornado outbreaks?

It’s complicated. Scientists are still trying to sort out the many conflicting factors about whether human-caused climate change is making tornadoes more common — or even more intense. About 1,200 twisters hit the U.S. each year — though that figure can vary — according to the NOAA National Severe Storms Laboratory. No other country sees as many.

Attributing a specific storm like Friday’s to the effects of climate change remains very challenging. Less than 10% of severe thunderstorms produce tornadoes, which makes drawing conclusions about climate change and the processes leading up to them tricky, said Harold Brooks, a tornado scientist at the National Severe Storms Laboratory.

Scientists have observed changes taking place to the basic ingredients of a thunderstorm, however, as the planet warms. Gensini says in the aggregate, extreme storms are “becoming more common because we have a lot warmer air masses in the cool season that can support these types of severe weather outbreaks.”

The U.S. is likely to see more tornadoes occur in the winter, Brooks said, as national temperatures rise above the long-term average. Fewer events will take place in the summer, he said.

Furtado of the University of Oklahoma said tornado alley, a term used to describe where many twisters hit the U.S., has shifted eastward into the Mississippi River Valley. That shift is because of increases in temperature, moisture and shear.

“Bottom line: The people in the Mississippi River Valley and Ohio River Valley are becoming increasingly vulnerable to more tornadic activity with time,” he said.

The tornado victims ranged in age from 28 to 62 and lived around the St. Louis area.

It’s going to get worse.

Friends and family search amidst remnants for valuables at the Defiance home of Ollie and Vernon Borgmann on Saturday, December 11, 2021 on Highway F in that was destroyed by a possible tornado. Photo by Christian Gooden, cgooden@post-dispatch.com

A home on a street off Highway F in Defiance shows severe damage on Saturday, December 11, 2021, as several buildings and homes in the area were affected by a possible tornado Friday night. Photo by Christian Gooden, cgooden@post-dispatch.com

Lightning strikes over the Amazon distribution center in Edwardsville after a first wave of storms partially collapsed the building after being hit a tornado on Friday, Dec. 10, 2021. Photo by Robert Cohen, rcohen@post-dispatch.com