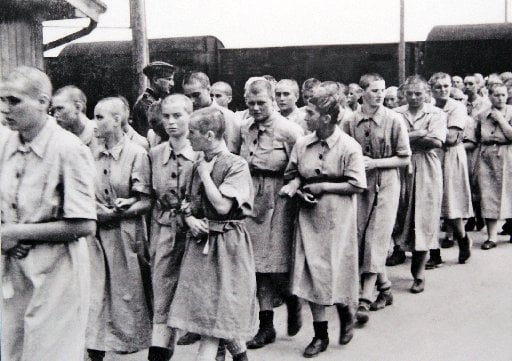 A photo of Jewish women prisoners at the Auschwitz concentration camp in 1944 is on display at the exhibit at Washington University. 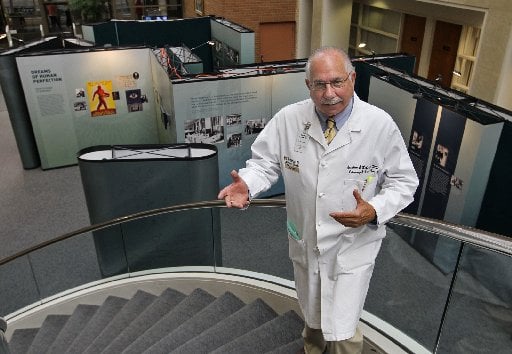 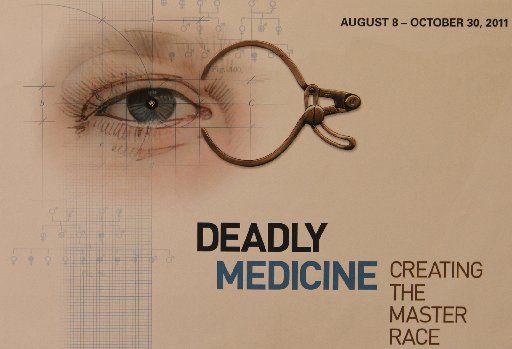 A poster used to advertise the exhibit at Washington University. 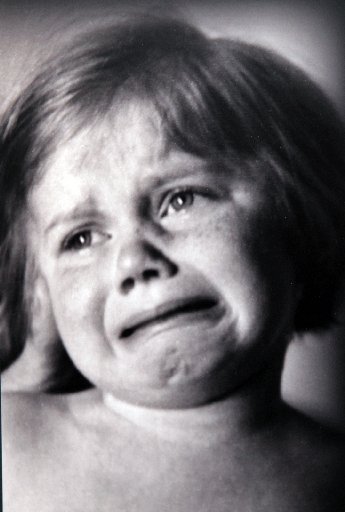 One of the 5,000 German children killed in the euthanasia program.

A new exhibit at Washington University highlights how science and medicine were used to conduct atrocities of the Holocaust.

"Deadly Medicine: Creating the Master Race," a traveling exhibit of the U.S. Holocaust Memorial Museum in Washington, will be featured through Oct. 30 at the Bernard Becker Medical Library on the medical school campus in the Central West End.

The free exhibit traces Adolf Hitler's quest to create a master race in part by recruiting doctors, geneticists and anthropologists to help identify, sterilize and kill people who were deemed genetically inferior.

In addition to the persecution and murder of 6 million Jews, hundreds of thousands of non-Jews with disabilities were also targeted.

More than 400,000 Germans were sterilized in the 1930s and 1940s. Doctors were ordered to euthanize German babies with birth defects, lie to their parents about the causes of death and falsify the records. Germans who couldn't pass intelligence tests were sterilized or sent to gas chambers. Patients in mental hospitals were killed or starved to death to make room for soldiers injured in World War II.

Pictures, maps and charts show how doctors judged people by their appearance and physical abilities. An eye-color chart, for example, was used to determine the presence of unwanted Roma (Gypsy) genes.

Although these horrors of the Nazi regime seem foreign and distant, the exhibit also outlines the history of eugenics in the U.S. and points toward ethical questions in today's genetic medicine.

Eugenics, defined as selective reproduction to improve the human race, was legal in many states in the 1900s (not including Missouri or Illinois) and led to the sterilization of thousands of Americans with conditions deemed undesirable — including epilepsy, promiscuity and poverty.

In North Carolina, officials are trying to find 1,500 men and women believed to be alive who were sterilized by the state between 1929 and 1974. The state is thought to be the first to try to compensate victims of sterilization, according to the Charlotte Observer newspaper.

Dr. Stephen Lefrak, the director of humanities at Washington University School of Medicine, said the exhibit can serve as a warning to society that abuses of medicine are not science fiction. When medicine can be manipulated to match someone's idea of improving the human race, the ethical stakes are raised.

"If a physician takes into consideration whether a patient's life has value or not, the consequences of that kind of thinking are very, very dangerous," Lefrak said.

Today, parents can decide to abort a pregnancy if abnormalities such as Down syndrome are detected. The number of fetuses in a multiple pregnancy can be selectively reduced in favor of gender or other factors. Through in vitro fertilization, genetic disorders like Huntington's disease can be eradicated in a family by choosing certain embryos over others.

A key difference, Lefrak said, is these decisions are not government-sanctioned. Still, societal pressure to produce the most perfect children possible can help drive these ethical decisions, he added.

"As our genetics get better in terms of science, the natural temptation is to try eugenics, to try to use it to improve humankind," Lefrak said. "It doesn't mean we repeat history, but we ought to be careful of what we're doing."

Co-workers say Sgt. Nathan Wooten was a self-proclaimed neo-Nazi who had a portrait of Adolf Hitler in his living room.

As part of the "Deadly Medicine" exhibit, Washington University School of Medicine will host several speakers. All events will be held in the …

Survivor's tale: Chesterfield resident talks about the Holocaust and the loss of her family

Being a hidden child during the Holocaust has made Chesterfield resident Rachel Goldman Miller come into the open with her story as an adult.

A photo of Jewish women prisoners at the Auschwitz concentration camp in 1944 is on display at the exhibit at Washington University.

A poster used to advertise the exhibit at Washington University.

One of the 5,000 German children killed in the euthanasia program.