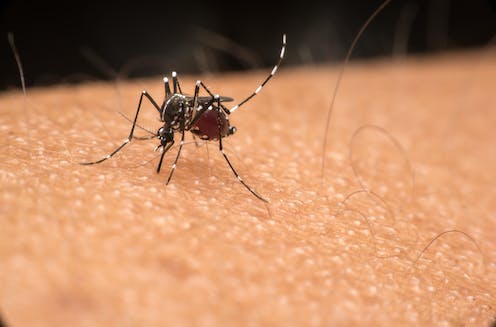 Mosquitoes need to feed on blood in order to reproduce. But how do they choose whom to feed on? boonchai wedmakawand/Moment via GettyImages

It’s rare to attend an outdoor party in warm weather without hearing people complain about mosquitoes. They swat away, sit in campfire smoke, cover up with blankets and eventually just give up and go indoors. On the other end of the spectrum, there are plenty of people who don’t seem bothered by mosquitoes in the slightest.

As a medical entomologist who’s worked with mosquitoes for more than 40 years, I’m often asked why some people seem to be mosquito magnets while others are oblivious to these blood-feeding pests buzzing all around them.

Most mosquito species, along with a host of other arthropods — including ticks, fleas, bedbugs, blackflies, horseflies and biting midges — require the protein in blood to develop a batch of eggs. Only the female mosquito feeds on blood. Males feed on plant nectar, which they convert to energy for flight.

Blood-feeding is an incredibly important part of the mosquito’s reproductive cycle. Because of this, a tremendous amount of evolutionary pressure has been placed on female mosquitoes to identify potential sources of blood, quickly and efficiently get a full blood meal, and then stealthily depart the unlucky victim. If you check some, or all, of the mosquito’s search boxes, then you may find that you are a mosquito magnet.

This video by Deep Look explains some of the ways mosquitoes feed on blood.

Depending on when during the day they are active, mosquitoes use sight, sound and olfactory cues to identify a potential source of blood. Most night-active species rely on olfactory or receptor cues. The most important chemical cue is the carbon dioxide that all vertebrates, including humans, release with each breath and through their skin.

Mosquitoes are very sensitive to CO2 and can sense a CO2 source that is many meters away. Receptor cells on the mosquito’s antennae and legs bind CO2 molecules and send an electrical signal to the brain. When more molecules hit their receptors, the higher the CO2 concentration and the closer they are to the host.

However, there are many nonliving carbon dioxide sources such as cars, boats, planes and trains. To separate living from nonliving sources of CO2, mosquitoes rely on the secondary olfactory cues that living animals produce. Metabolic processes like breathing and moving generate these scent cues, including lactic acid, ammonia and fatty acids that act as additional olfactory clues that help female mosquitoes zero in on their next blood meal.

This video by Business Insider explains some of the factors that can make a mosquito magnet.

Natural body odors are also important cues used by mosquitoes to select a host. For example, some species of Anopheles mosquitoes are attracted to specific components of foot odor. These mosquitoes transmit human malaria and feed indoors in the middle of the night. By feeding on a sleeping person’s feet, the mosquitoes avoid the head, where most of the CO2 is produced, and reduce the chance of waking the victim.

Mosquitoes active during the day and at dawn and dusk also use visual signals to identify a host. Mosquitoes usually fly close to the ground. From this vantage point they view their potential hosts against the horizon. Dark colors stand out and light colors blend in, so the way a person is dressed will determine the number of mosquitoes they attract. Wearing lighter colors may not just help keep you cool, but will help you evade a mosquito’s notice.

There is also a psychological component to mosquito activity. Some people simply do not notice the mosquitoes around them. A single mosquito flying around some people will elicit a strong response — you’ve probably seen someone go nuts trying to track down the droning sound of one mosquito in order to finish off the tiny bloodsucker.

Other individuals are not bothered and do not notice the mosquitoes that are attracted to them, even when the insects are feasting on their blood. Some mosquitoes specialize on feeding on parts of the body that are difficult to see and difficult to swat. For example, Aedes aegypti is a mosquito species that prefers to feed on humans, mostly around the ankles.

Whether or not you’re a mosquito magnet, their bites feel just as itchy!

Jonathan Day does not work for, consult, own shares in or receive funding from any company or organization that would benefit from this article, and has disclosed no relevant affiliations beyond their academic appointment.

This article is republished from The Conversation under a Creative Commons license.

Wash area with soap and water‌

Create an ‘X’ over the bump‌

The world’s largest volcano is oozing rivers of glowing lava and drawing thousands of awestruck viewers who jammed a Hawaii highway that could soon be covered by the flow. Mauna Loa awoke from its 38-year slumber Sunday, causing volcanic ash and debris to drift down from the sky. On Wednesday, a main highway linking towns on the east and west coasts of the Big Island became an impromptu viewing point. Thousands of cars jammed the highway near Volcanoes National Park. Anne Andersen left her overnight shift as a nurse to see the spectacle. She was afraid that the road would soon be closed.

Hawaii volcano eruption has some on alert, draws onlookers

Despite assurances that lava from Hawaii's Mauna Loa isn't threatening communities, some residents are remaining vigilant. For Nicole Skilling, the first eruption in 38 years of the world’s largest active volcano is bringing back bad memories. She fled from another Hawaii volcano in 2018. Back then she lived near the community where lava destroyed more than 700 homes. She relocated to the South Kona area, only to find herself packing her car with food and supplies after Mauna Loa erupted late Sunday. Officials say the areas where lava is emerging are far from homes and communities. The eruption has also drawn onlookers to a national park for views of the event that are said to be “spectacular.”

Many people on the Big Island of Hawaii are bracing for major upheaval if lava from Mauna Loa volcano blocks the quickest route connecting two sides of the island. The molten rock could make the road impassable and force drivers to find alternate coastal routes in the north and south. That could add hours to commute times, doctor’s visits and freight truck deliveries. The lava is oozing slowly at a rate that could reach the road next week. But its path is unpredictable and could change course, or the flow could stop completely and spare the highway.

Waves of orange, glowing lava and ash blasted and billowed from the world’s largest active volcano and people on Hawaii’s Big Island have been warned to be ready if their communities are threatened. The ongoing eruption of Mauna Loa wasn’t immediately endangering nearby towns on Monday. But officials told residents to be ready in the event of a worst-case scenario. The U.S. Geological Survey says the eruption began late Sunday night in the volcano on the Big Island. Scientists had been on alert because of a recent spike in earthquakes at the summit of the volcano, which last erupted in 1984.

“There’s lots of technologies, but the reality in the field is it just doesn’t work.”

The spectacle of incandescent lava spewing from Hawaii's Mauna Loa has drawn thousands of visitors and is turning into a tourism boon for a Big Island town near the world’s largest volcano. Some hotels in and around Hilo are becoming fully booked in what is normally a slower time of the year for business. Helicopter tours of Mauna Loa, which began erupting Sunday after being quiet for 38 years, are also in high demand by tourists and journalists. Hawaii's travel industry normally falls off this time of year between the Thanksgiving and Christmas holidays.

French President Emmanuel Macron will be the guest for the first state visit of Joe Biden’s presidency. The event this week is a revival of diplomatic pageantry that had been put on hold because of the COVID-19 pandemic. The Biden-Macron relationship has turned around from its choppy start. Macron briefly recalled France’s ambassador to the United States last year after the White House announced a deal to sell nuclear submarines to Australia that undermined a contract that France had to sell diesel-powered submarines. Today, Macron has become one of Biden’s most forward-facing European allies in the Western response to Russia’s invasion of Ukraine.

HILO, Hawaii (AP) — The lava from the world's largest volcano is so hot and bright that the sky has turned orange. At night, throngs of people have been gathering to witness nature's spectacular light show in Hawaii.

Tech billionaire Elon Musk said his Neuralink company is seeking permission to test its brain implant in people soon. During a presentation Wednesday, he said his team is in the process of asking U.S. regulators to allow them to test the device in people. He says he thinks that might happen in about about six months, though that timeline is far from certain. His company's efforts are part of the growing field of brain-computer interface technology, which has been making strides in various arenas. Musk said the first two applications would be restoring vision and helping people who can't use their muscles operate digital devices.

A scientist who led one of the first projects to map the Hawaiian Islands’ deep volcanic plumbing explains what’s going on under the surface.