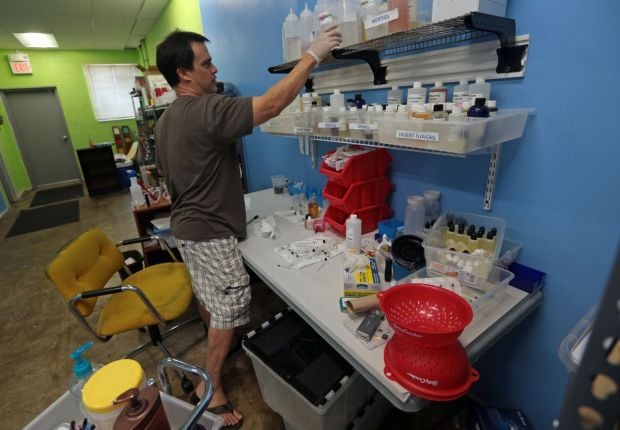 Owner Dean Hutton mixes a tank of juice for a customer on Sunday, Sept. 28, 2014, in the back room at MOvape Electronic Cigarette Store located at 119 Concord Plaza Shopping Center in St. Louis, Mo. Photo by Laurie Skrivan, lskrivan@post-dispatch.com 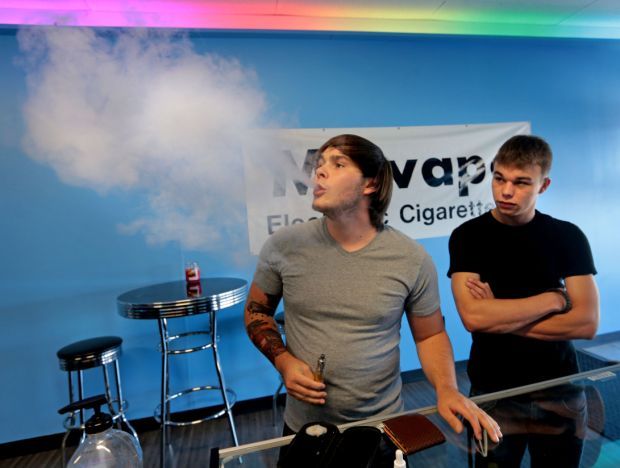 "I come in here all the time and sample the juice flavors," said Mike Reynolds (left) who vaps a watermelon juice on Sunday, Sept. 28, 2014, at MOvape Electronic Cigarette Store located at 119 Concord Plaza Shopping Center in St. Louis, Mo. His friend Taylor Kreter is on the right. Photo by Laurie Skrivan, lskrivan@post-dispatch.com

Are e-cigarettes, the popular battery-powered devices marketed as a smoking alternative, tobacco products?

How government regulators, insurance companies and customers each answer that question is key to deciding whether e-cigarette users will face higher health insurance premiums for their habit.

The Affordable Care Act allows insurers to tack on a higher premium to customers who use tobacco products. The charge can cost up to 50 percent of a client’s premium and — more costly to some — cannot be subsidized by a federal tax credit.

But the 2010 law is silent on e-cigarettes, which were a nascent industry at the time, an omission that leaves insurers unsure how to view them and users in a precarious position.

Now, however, the device has grown in popularity, with an estimated 20.4 million people trying an e-cigarette sometime during 2013, according to a recent government report.

E-cigarettes produce an odorless vapor that, like traditional cigarettes, contains nicotine. But federal regulators aren’t sure whether to treat it as tobacco when it comes to advertising, banning sales to minors and when it comes to health insurance surcharges.

The Food and Drug Administration, which regulates cigarette smoking, has taken initial steps to suggest it will restrict e-cigarettes like other tobacco products but has yet to make a final ruling on the matter.

And the Centers for Medicare and Medicaid Services, which runs the online health insurance marketplaces, said it is still evaluating how health policy issuers may treat e-cigarette users.

In the absence of federal guidance, insurance companies are essentially left on their own to decide whether e-cigarettes should be viewed the same way as traditional tobacco products.

“There’s a little bit of a regulatory vacuum here that I think could allow an insurance company to kind of decide for itself how to approach this issue,” said Sabrina Corlette, an attorney and professor at Georgetown University’s Center on Health Insurance Reforms.

E-cigarette use has more than doubled since 2010 with an estimated 8 percent of adults having used the product at least once, according to the Centers for Disease Control and Prevention.

The center also found that frequent e-cigarette use (described as use at least every 30 days) has increased to 2.6 percent of adults last year from 1 percent in 2010.

The increasing popularity also has led entrepreneurs, including many in St. Louis, to take advantage of the budding market.

Dean and Kathy Hutton opened the doors of MOvape in south St. Louis County in October 2013 at the cusp of the e-cigarette boom.

“The craze just took off just after we opened,” Dean Hutton said.

The Huttons say they were the lone store in their immediate area at first and that business was good. But increased competition has since put pressure on their company, a sign they say points to e-cigarettes’ increasing popularity.

But they say the federal regulation and the possibility of an insurance surcharge on their customers could be a threat to their business and ignores the fact that e-cigarettes don’t contain tobacco.

The Huttons were smokers — Kathy for 30 years, Dean for 18 — who now exclusively use e-cigarettes. They say the devices are a healthier, cheaper alternative to regular cigarettes, but that they wouldn’t recommend a nonsmoker to start using them.

Some prominent health groups disagree on the product’s benefits and say more research is needed.

“Until electronic cigarettes are scientifically proven to be safe and effective, [we] will support the regulation of e-cigarettes and laws that treat them like all other tobacco products,” the American Cancer Society says on its website.

“I would advise my clients ‘no don’t put that down,’ because you are going to be paying a lot more for it,” said Emily Bremer, a partner at Bremer Conley, a brokerage firm, adding that people shouldn’t view the products like tobacco until — or if — the government says otherwise.

Without federal clarity, the question of surcharges in Missouri could become even more muddled by a new state law set to take effect Oct. 10.

The law bans e-cigarette sales to people younger than 18 and subjects them to local and state sales taxes. But it also contains a provision that says they cannot otherwise be taxed or regulated as tobacco products.

Whether that prohibition includes e-cigarette surcharges is up in the air because of Missouri’s unique insurance regulatory system.

Because Missouri is the only state that does not receive health insurance rate information, state regulators have no way of knowing whether an insurer is levying an e-cigarette surcharge unless they receive complaints from consumers.

Corlette said Missouri’s new e-cigarette law doesn’t directly regulate the behavior of insurance companies, but said a final determination on the legality of a surcharge in the state would need to be made by the federal government.

“This is one of these areas where the industry is ahead of the regulators on this one,” Corlette said.

Some businesses are also ahead of the curve. Springfield, Mo.-based CoxHealth announced last year that all new hires would have to undergo screening for nicotine, which would be present in a person’s system through traditional or e-cigarette use. Wal-Mart and United Parcel Service also increased employee health insurance premiums for e-cigarette use.

Luckily for other Missouri e-cigarette users, it doesn’t appear the two carriers with health plans on the online insurance marketplace are considering e-cigarette use — yet.

“For our individual business we do not consider e-cigarettes as tobacco use that can affect the rates we charge,” said Deb Wiethop, a spokeswoman for Anthem Blue Cross Blue Shield in Missouri. “We interpret tobacco as products that contain tobacco such as cigarettes, cigars, chewing tobacco, and snuff.”

“At this time Coventry Health Care, an Aetna company, does not ask about or rate for e-cigarette usage,” said spokesman Rohan Hutchings. “Aetna’s policies and procedures [will] be revisited as future guidance dictates.”

Jordan Shapiro is a reporter for the St. Louis Post-Dispatch.

They say they're worried about the public safety risk posed by rogue, unregulated 'open systems,' not competition.

It is renaming itself CVS Health, underscoring the bigger role it hopes to play in the health care market.

No e-cigarettes for minors in Chesterfield after council vote

City to restrict sales and possession to minors.

Owner Dean Hutton mixes a tank of juice for a customer on Sunday, Sept. 28, 2014, in the back room at MOvape Electronic Cigarette Store located at 119 Concord Plaza Shopping Center in St. Louis, Mo. Photo by Laurie Skrivan, lskrivan@post-dispatch.com

"I come in here all the time and sample the juice flavors," said Mike Reynolds (left) who vaps a watermelon juice on Sunday, Sept. 28, 2014, at MOvape Electronic Cigarette Store located at 119 Concord Plaza Shopping Center in St. Louis, Mo. His friend Taylor Kreter is on the right. Photo by Laurie Skrivan, lskrivan@post-dispatch.com