Not long after Dave and Jennifer Guyton moved to Hazelwood, they realized their neighbors were organized into two camps:

Over the years, that contract has grown increasingly expensive, and the two parties have ended up in court over an attempt by the city to use its existing department to serve the area — where the Guytons live, for significantly less money.

The Guytons, concerned about the potential for their property taxes to dramatically rise, decided to do some investigation. “We didn’t know who to believe,” Jennifer says. “We came in as outsiders.”

For instance, Robertson, they found, has the highest cost per call of all the fire protection districts in St. Louis County, and it’s more than twice as much as Valley Park, a district with a similar number of firehouses, calls and assessed valuation.

The Robertson district’s costs for fuel, internet, cellphones and vehicle turnover all appeared to be higher than other fire districts in St. Louis County, in some cases by significant amounts.

The Guytons wanted to know where the money was going. With some of their neighbors they formed a nonprofit called Residents of Hazelwood Inc., and they filed some Sunshine Law requests to get answers. “I wanted to see the facts,” Dave says.

The fire district, as too many government bodies often are in Missouri, has been slow to respond to their requests. They got some information from looking at minutes for old meetings. For instance, the district has a program where it sells old equipment — including SUVs and ambulances — to employees, at apparently significant discounts. The Guytons sought the details: bids, sales records, and the like.

They didn’t get the records.

That’s why earlier this month, Residents of Hazelwood filed an open records lawsuit against the fire district.

“Plaintiff Residents for Hazelwood, Inc., has requested the defendants (Robertson Fire Protection District, its custodian of records, and its secretary) many times to make available or produce the district’s public records pursuant to Missouri’s freedom of information statutes,” the lawsuit, filed by attorney Paul Martin, alleges. “The defendants have failed or refused many of these requests, preventing the plaintiff from investigating, assessing, and disclosing the district’s expenditure of public funds and their use of district resources.”

The lawsuit names the district, its fire chief, Maynard Howell, and its board secretary, Michael Conley, as defendants. Chuck Billings, the general counsel for the fire district, declined comment. He said an outside attorney, Dan McLaughlin, is handling the defense. McLaughlin didn’t return a phone call seeking comment. 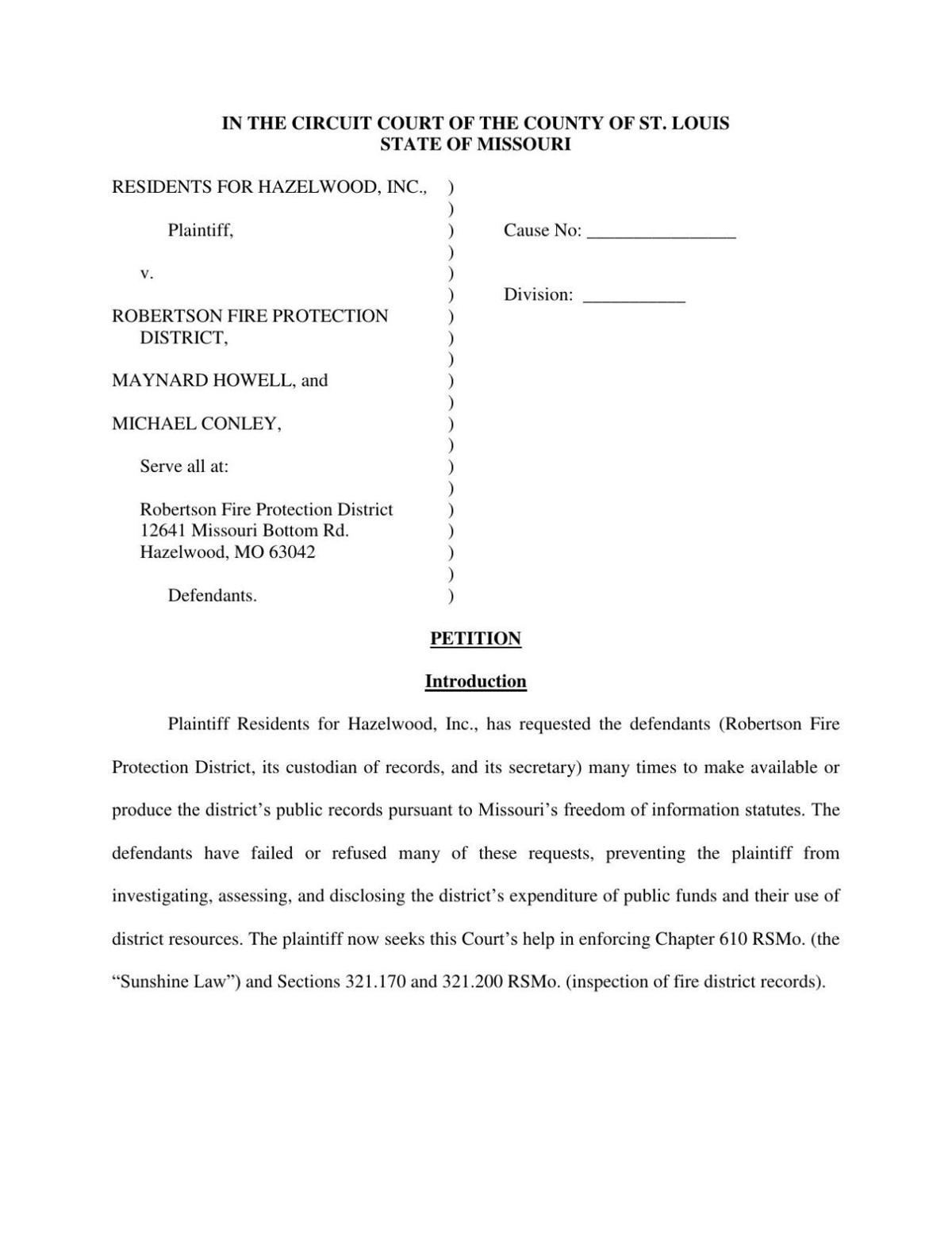 The lawsuit notes that the district has a high turnover of vehicles, in which older models are sold to employees, but Sunshine Law requests didn’t produce the records from those alleged sales, including the sale of a “state-of-the-art” ambulance that was, apparently, sold to Howell.

“The district’s practice of ‘internal disposition’ of surplus property appears to have also resulted in the sale of other equipment to district insiders, including automobiles, computers, iPads, and commercial grade generators, but the plaintiff has not been able to identify the cost of the original equipment, to whom the equipment was sold, the condition of the equipment at the time of sale, —or whether the sales were made at fair market value, due to the failure or refusal of the district to produce the requested records,” the lawsuit alleges.

For the Guytons, the issue is simple. If the Robertson fire district can defend its out-of-whack spending that is causing budget problems for the city of Hazelwood, and high property taxes for its residents, it ought to be able to show residents the paperwork that explains the spending.

Messenger: Release of investigative report is a win for veterans and government transparency

Memo to Democrats on House committee lays out damning allegations against the governor's administration.

Fire district run by Stenger fundraiser donates nearly all of its money to the county executive.