Former U.S. Sen. John C. Danforth is ending the year the way he began it.

It’s the provably false notion that even today makes it hard for many elected Republicans to admit that Biden is the legitimate president, lest they run afoul of the angry Trump supporters who make up the Republican base and who have come to believe the Big Lie.

In January, the insurrection caused Danforth to apologize to the nation for his early support of Hawley.

“Supporting Josh and trying so hard to get him elected to the Senate was the worst mistake I ever made in my life,” Danforth told me in January. “Yesterday was the physical culmination of the long attempt (by Hawley and others) to foment a lack of public confidence in our democratic system. It is very dangerous to America to continue pushing this idea that government doesn’t work and that voting was fraudulent.”

Now he’s turning his attention to one of the many Republican propaganda outlets — St. Louis-based The Gateway Pundit — that peddled the Big Lie and targeted election officials in Georgia and elsewhere simply for doing their jobs.

In December, James Bennett of the St. Louis power law firm Dowd Bennett filed a lawsuit, along with Danforth, against The Gateway Pundit publication, its founder, James Hoft, and his brother, Joseph Hoft, accusing them of defamation and intentional cause of emotional distress of two Georgia election workers, Ruby Freeman and Shaye Moss. 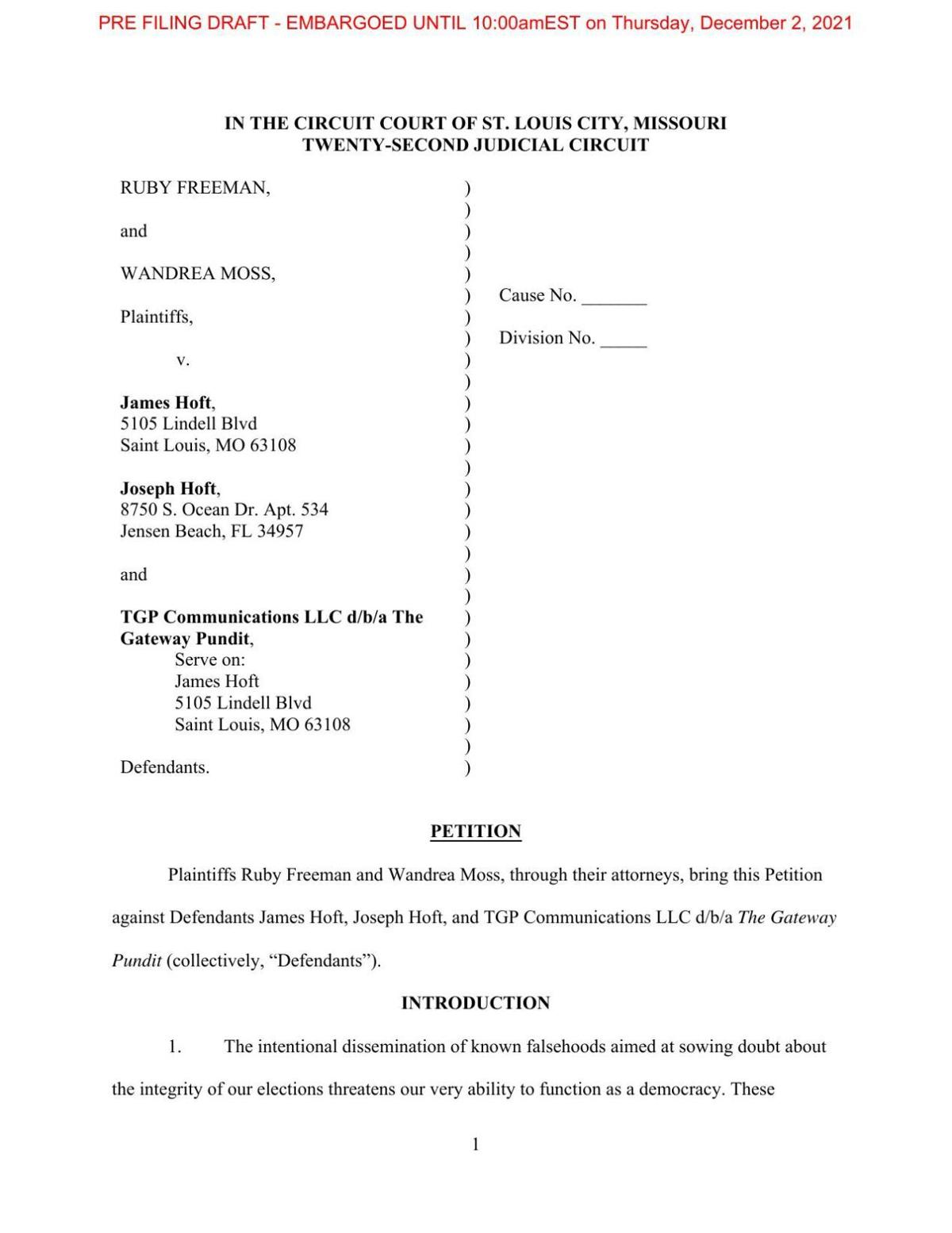 “The intentional dissemination of known falsehoods aimed at sowing doubt about the integrity of our elections threatens our very ability to function as a democracy. These falsehoods also destroy the lives of America’s election workers, whose service to our system of government places them in the crosshairs of those who seek to undermine it with their disinformation,” the lawsuit alleges. “Plaintiffs Ruby Freeman and Wandrea ‘Shaye’ Moss have been the targets of such a campaign of lies, accused by Defendants James Hoft, Joseph Hoft, and The Gateway Pundit of committing ballot fraud to alter the outcome of the 2020 presidential election in Georgia. The lies about Ms. Freeman and Ms. Moss have not only devastated their personal and professional reputations but instigated a deluge of intimidation, harassment, and threats that has forced them to change their phone numbers, delete their online accounts, and fear for their physical safety.”

The lawsuit was filed in St. Louis Circuit Court. An attorney for Joseph Hoft has sought to move the case to federal court. In the filing, he alleges that the defamation lawsuit is an attempt to “demonize” and “cripple” the Hofts.

America’s democracy would be better off for an end to The Gateway Pundit and internet copycats that peddle lies that cause real damage to people and to American democracy. For too long, many Republicans have coddled the Hofts and others like them. The insurrection changed things for some, such as Danforth.

One of the reasons Republicans believe such nonsense is the very existence of publications like The Gateway Pundit. Another is the cowardice of elected Republicans, and those running for election, who won’t stand up for the simple truth that Biden won the election and that the election was secure.

“If you look at the Senate race in our state, candidates are making that assertion, that the election was stolen, and that was a very, very serious charge,” Danforth says. He hopes lawsuits like the one against The Gateway Pundit, and similar ones filed by the Dominion Voting Systems against Fox News, One America News, and Newsmax, lead to a needed change and a return to a common bipartisan belief in the importance of American democracy.

“I wish,” Danforth says, “there were a button that could be pushed that would bring us back.”

Tony Messenger's columns on Hawley and the Jan. 6 Capitol riot

One year later, in many ways, the situation that led to the Jan. 6 attempts to invalidate the election have become worse.

Congress’ failure to pass voting protections could have lasting damage.

Missouri's junior senator is blocking appointments to the Department of Defense, making the country weaker.

Messenger: On Jan. 6 sentences, definition of justice depends on one's point of view

Messenger: From Emily Hernandez to Kimberly M. Gardner, views on punishment depend on how one sees justice.

The uniting message of America's greatest evangelist is needed in today's divided and dishonest political system.

The lawsuit names the St. Louis-based website, its founder and editor Jim Hoft, and his brother, writer Joe Hoft.

Missouri's senior senator won't run for re-election. A scrum for his seat will ensue.

Messenger: Fifty years after Danforth revived the Missouri GOP, the script has been flipped

Fifty years ago, in a much different Missouri, Danforth won his first election to become the only statewide elected Republican. Now Nicole Galloway finds herself the last Democrat standing.

John Wood is a former U.S. Attorney and St. Louis native who got his start in politics interning for Sen. John C. Danforth.

Watch Now: Netflix and movie theaters might be teaming up

Watch Now: Netflix and movie theaters might be teaming up 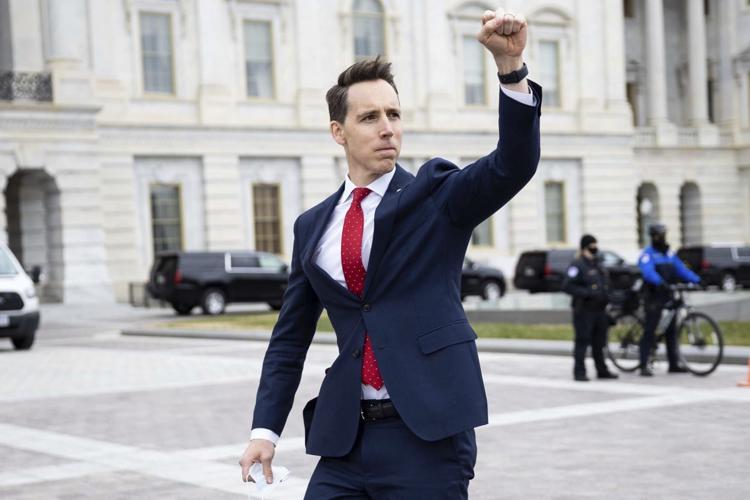 Sen. Josh Hawley, R-Mo., raises his fist in solidarity as a crowd of Trump supporters gathers before attacking the U.S. Capitol on Jan. 6. 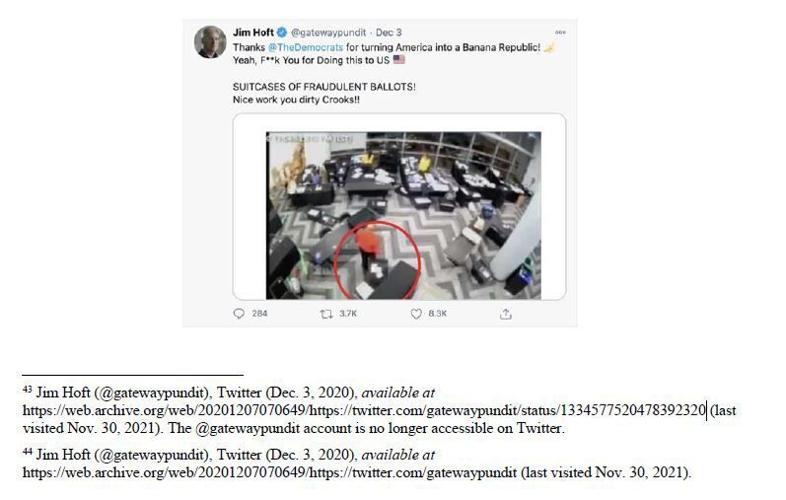 Jim Hoft posted this tweet on Dec. 3, 2020, according to a lawsuit filed against him, the Gateway Pundit and his brother Joe Hoft. (Screengrab from lawsuit) 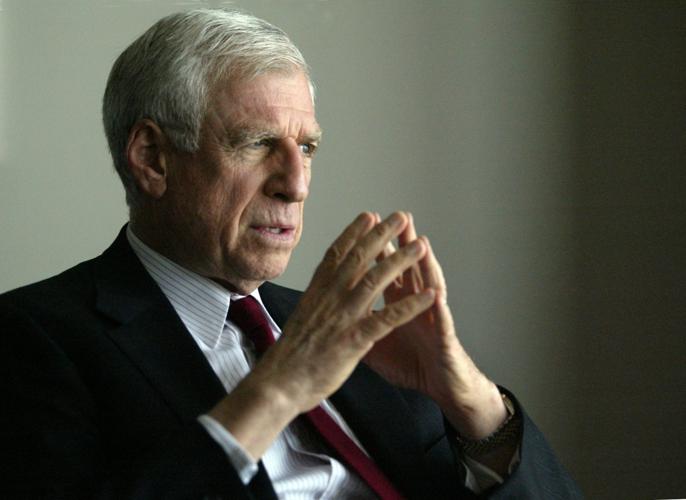