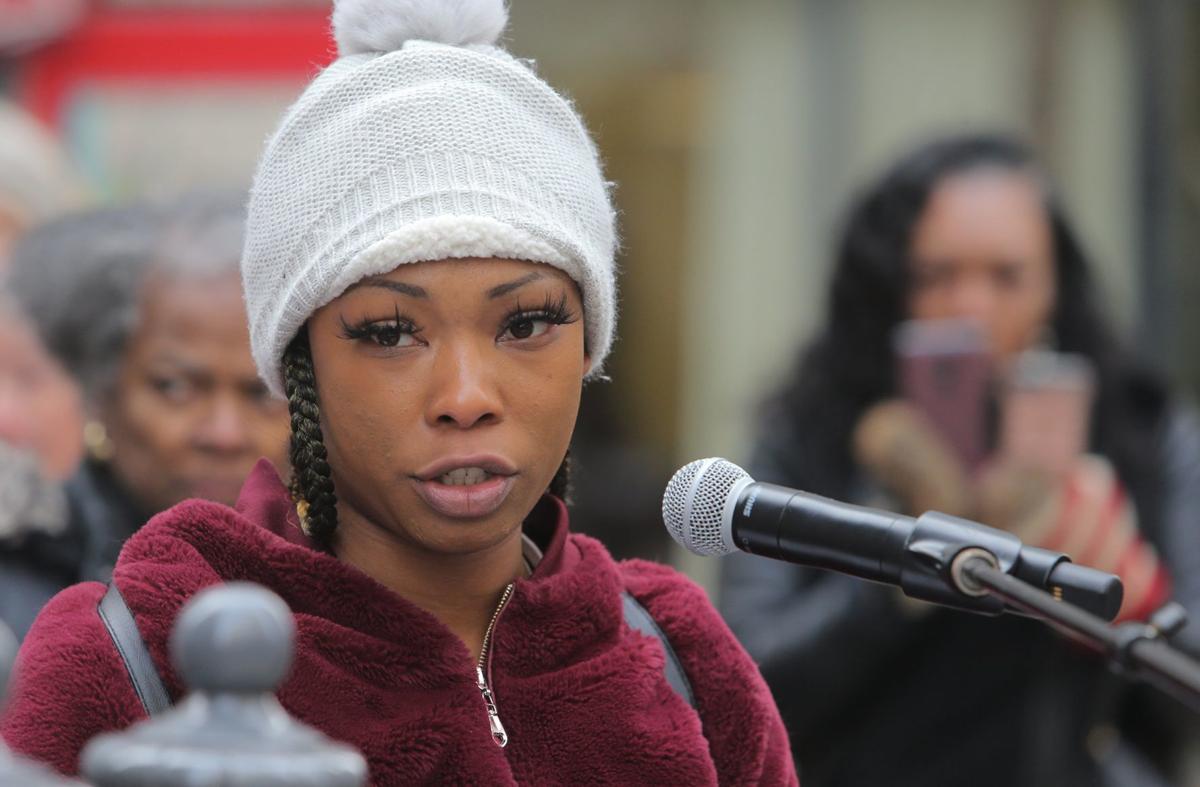 Brittany Johnson, 26, talks about her father, Lamar Johnson, on Tuesday, Dec. 10, 2019, outside the offices of Missouri Attorney General Eric Schmitt in downtown St. Louis. Friends of Lamar Johnson held a press conference demanding the release of Johnson, who has been imprisoned for 25 years. After the press conference, several people delivered a petition signed by more than 25,000 people to Missouri Attorney General Eric Schmitt's office. The petition asks for a new trial for Johnson. Photo by J.B. Forbes, jforbes@post-dispatch.com 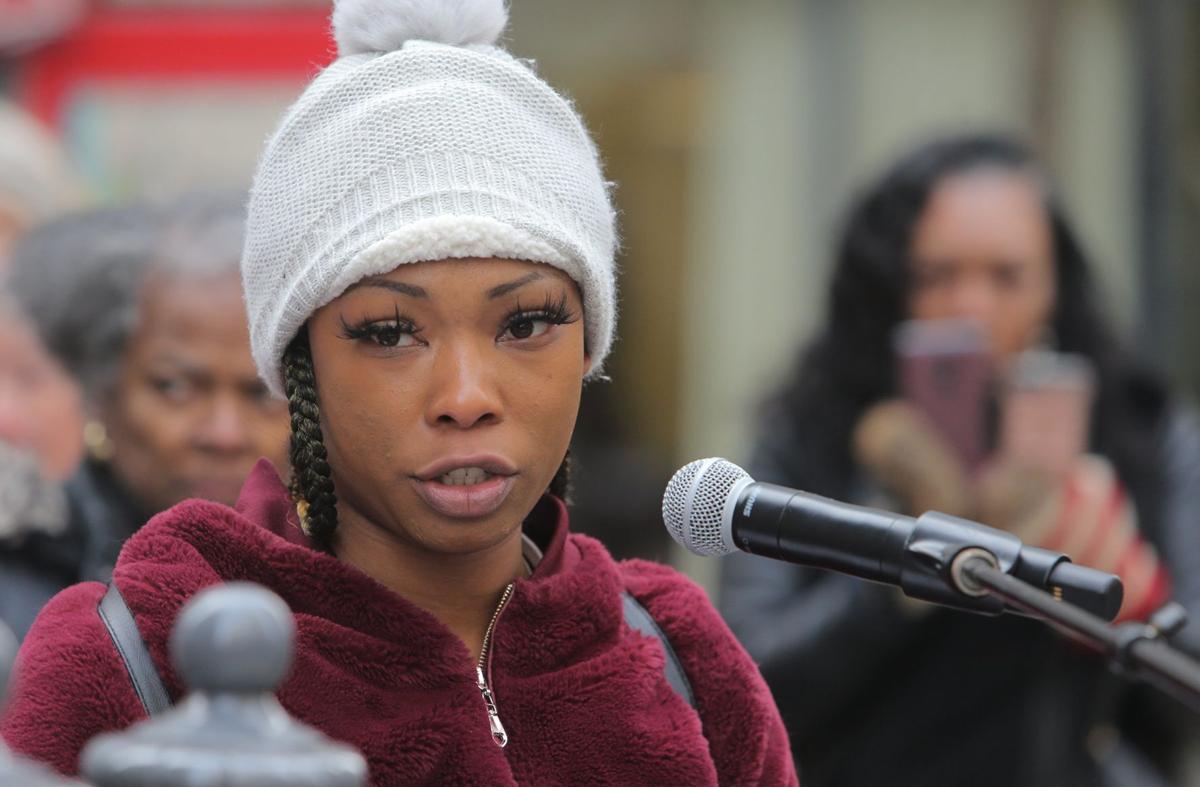 Brittany Johnson, 26, talks about her father, Lamar Johnson, on Dec. 10, 2019, outside the offices of Missouri Attorney General Eric Schmitt in downtown St. Louis.

Sometimes, there is serendipity in timing.

In March, the Missouri Supreme Court issued a frustrating ruling that, at least temporarily, blocked Lamar Johnson’s path to freedom. Johnson has been in prison for 26 years for a murder he says he didn’t commit. St. Louis Circuit Attorney Kim Gardner agrees with him. Citing strong evidence of police and prosecutorial misconduct, she filed a motion in 2019 seeking to vacate his verdict. A circuit court judge, the Court of Appeals and the state Supreme Court, all told Gardner she couldn’t do that, even if Johnson could prove his innocence.

Missouri Supreme Court Justice George Draper, like Johnson, a Black man from St. Louis, issued a challenge to the Missouri Legislature in a concurring opinion in that case to fix the injustice by creating a mechanism for prosecutors to seek justice in wrongful conviction cases. The decision came down after the last day for filing new bills in the Missouri Legislature had passed.

Deadlines in the state Capitol, though, are squishy. There are stories, legends, perhaps, of lawmakers stopping the clock on the last day to give themselves more time. When there’s a will there’s a way. So, with prosecutors and members of the defense bar, including Johnson’s attorney Lindsay Runnels working behind the scenes, a measure allowing prosecutors to do precisely what Gardner tried to do was attached to various bills.

None of this will likely help Johnson, unfortunately. Gardner’s attempt to free him already failed. Runnels plans to file a habeas corpus action with the Missouri Supreme Court within the next week, starting a new process that will likely be opposed by Attorney General Eric Schmitt and could take another year or two to resolve.

But make no mistake, Runnels says, just a few miles from the Capitol, behind the bars and barbed wire fences at the Jefferson City Correctional Center, Johnson is smiling at the progress he helped create.

“If even one person is set free because of this legislation, then maybe the pain he’s endured for the last two years can have some meaning,” Runnels said. “He is celebrating even though he may never benefit from the legislation he brought about.”

The bill might also be too late for Kevin Strickland. Last week, attorneys with the Midwest Innocence Project filed a habeas corpus action with the Missouri Supreme Court seeking to overturn his 1978 triple-murder conviction. He’s innocent, they say. The witness who put him at the scene has recanted. Again, the local prosecutor — in this case, Jackson County Prosecuting Attorney Jean Peters Baker — agrees. Because the courts in Missouri won’t let her seek to overturn the conviction herself, she filed a motion supporting Strickland’s innocence.

Baker hopes that the court takes up Strickland’s case and frees him before the law passed Thursday takes effect in August (assuming the governor signs it).

“My hope is that Mr. Strickland will not need this new fix because his case is before the Supreme Court now,” she says. “But I will use any pathway available to exonerate and free him.”

Strickland’s case offers the court yet another opportunity to right a past wrong. Because of a 2016 case the court has stubbornly allowed to stand, innocence isn’t enough to free a man from prison in Missouri, unless he is on death row, or can also prove a constitutional violation in the original trial. Neither Strickland nor Johnson are on death row. Neither is Christopher Dunn, a man I wrote about recently. A judge reviewing Dunn’s 30-year-old conviction found overwhelming evidence of innocence but said he couldn’t free Dunn because of the court’s precedent in a case involving Rodney Lincoln, another innocent man who was only freed when former Gov. Eric Greitens commuted his sentence.

Now, Missouri is poised to join at least 20 other states that have a mechanism for prosecutors to seek justice, when their conviction integrity units uncover misconduct or new evidence that proves the innocence of people long ago convicted.

“This law is a big step in the right direction,” Bell said in a statement. Indeed it is. It likely won’t help Lamar Johnson or Kevin Strickland or Christopher Dunn walk out of prison, but others will follow the big footsteps they planted in the shifting sands of Missouri justice.

Strickland’s name was not on a list of 36 pardons Parson issued this week and the Missouri Supreme Court this week declined to hear his petition for freedom. The court did not give a reason for its decision.

Strickland applied for clemency Tuesday, saying he does not want a commutation of his sentence.

Messenger: Man facing return to prison asks Missouri attorney general to be a ‘minister of justice’

Attorney for reformed drug dealer asks that appeal in his case be dismissed.

Brittany Johnson, 26, talks about her father, Lamar Johnson, on Tuesday, Dec. 10, 2019, outside the offices of Missouri Attorney General Eric Schmitt in downtown St. Louis. Friends of Lamar Johnson held a press conference demanding the release of Johnson, who has been imprisoned for 25 years. After the press conference, several people delivered a petition signed by more than 25,000 people to Missouri Attorney General Eric Schmitt's office. The petition asks for a new trial for Johnson. Photo by J.B. Forbes, jforbes@post-dispatch.com

Brittany Johnson, 26, talks about her father, Lamar Johnson, on Dec. 10, 2019, outside the offices of Missouri Attorney General Eric Schmitt in downtown St. Louis.