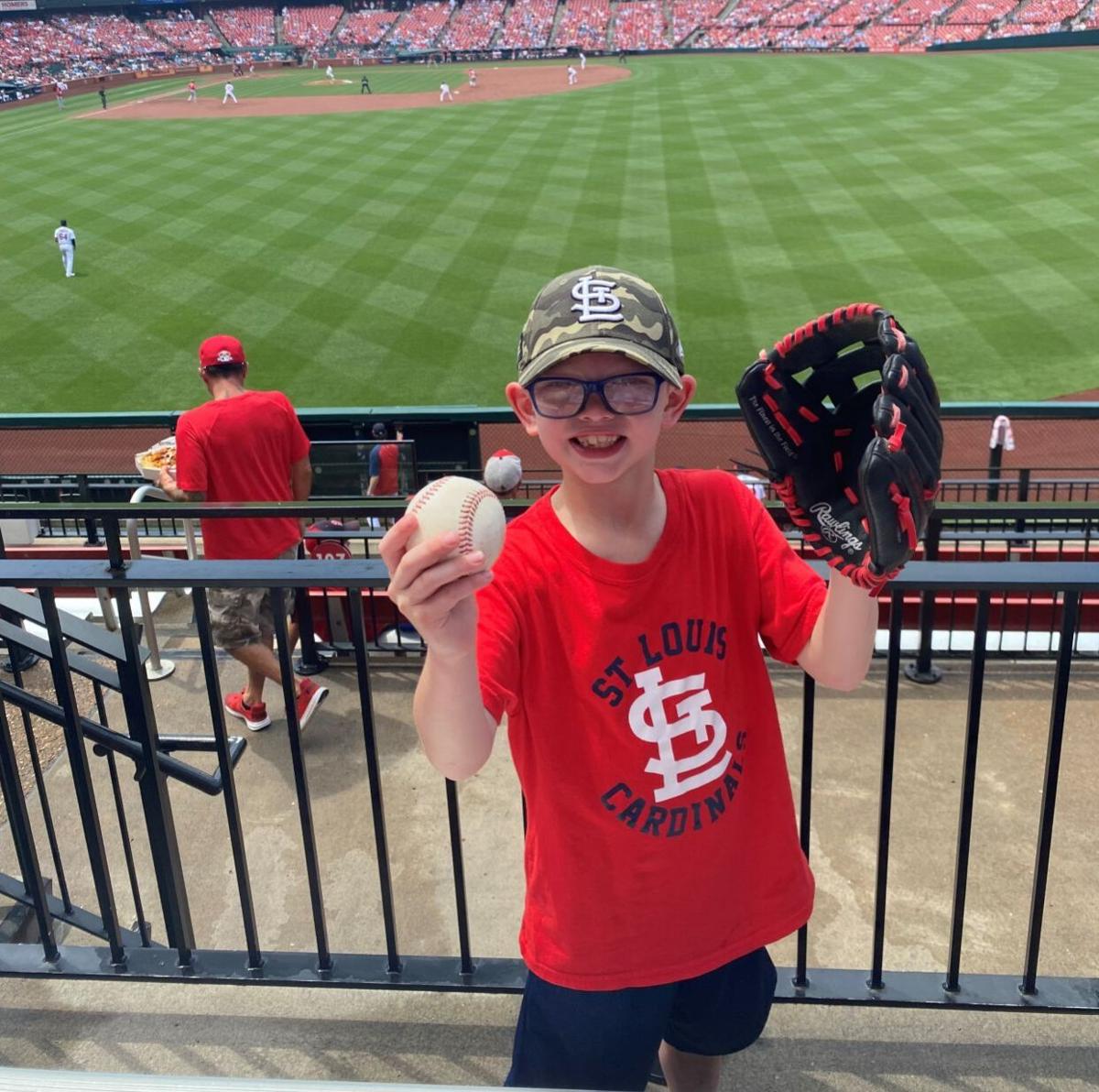 Connor Kaelin with a game ball. 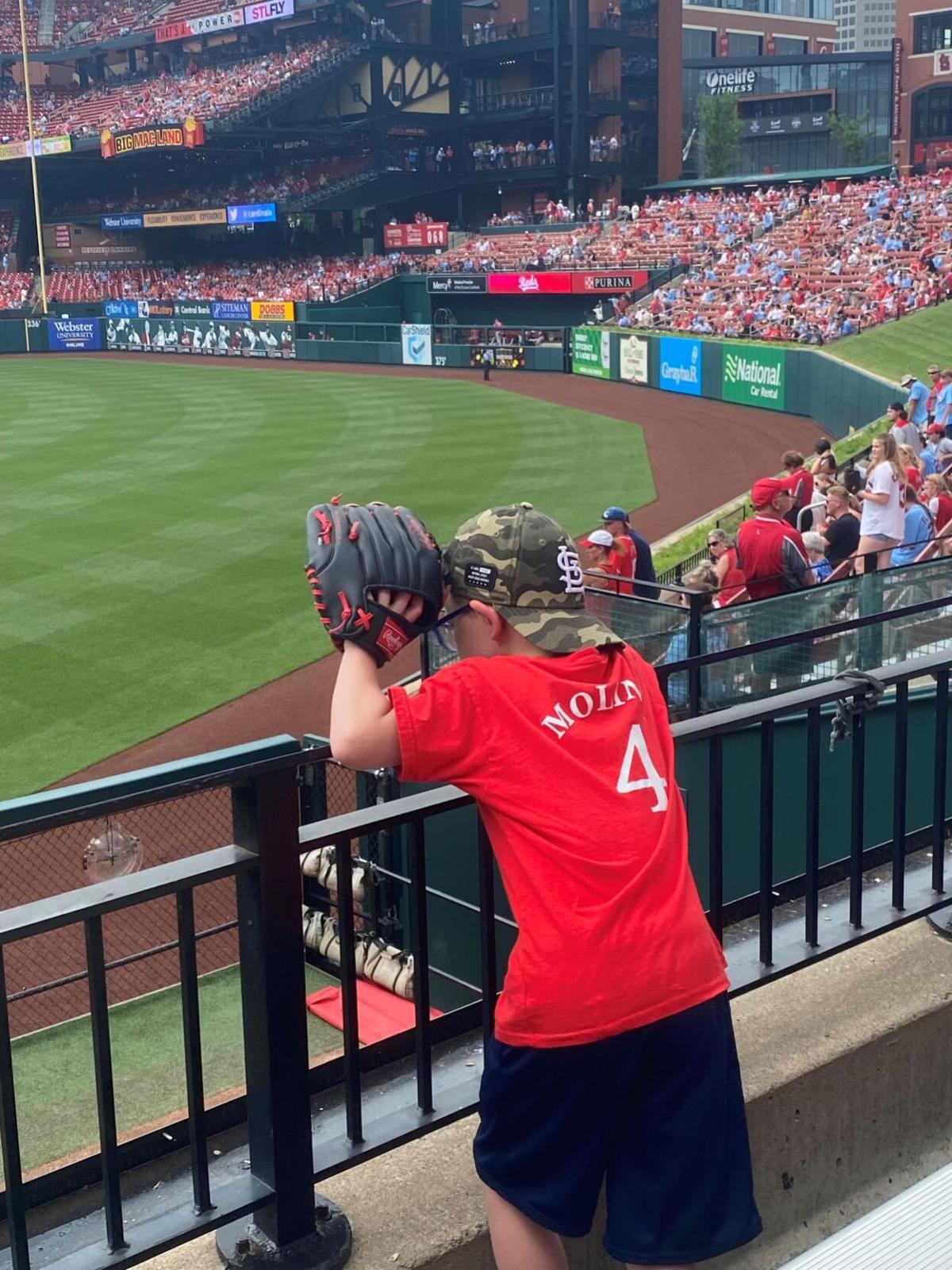 Connor Kaelin on the lookout for a game ball.

This is a story of three baseballs.

Each of them started their day on the manicured green grass at Busch Stadium on June 6. The St. Louis Cardinals would lose to the Cincinnati Reds that day, but that result is immaterial to this story.

Connor Kaelin sat in the right field stands that day, with his black-and-red baseball glove raised high to the sky hoping a baseball would come his way. Connor wore a red Cardinals T-shirt with the name and number of his favorite player, Yadi Molina, on the back. He wears the same No. 4 on his youth baseball team when he plays at the Affton Athletic Association, near where he lives in Sunset Hills.

He lives with his Maw-Maw, Kay Lincoln, who has been raising him since he was 2, when his mother, Jessica Paxton, was murdered. Lincoln knows a thing or two about the criminal justice system, having seen it from multiple sides. Her father, Rodney Lincoln, spent more than 30 years in prison for a murder he didn’t commit. So said the judges who wouldn’t let him out because he wasn’t on death row. His sentence was eventually commuted.

But that’s all a story for another day. This story is about Connor, who loves going to Cardinals games with his grandmother, and also enjoys playing soccer. “He’s a bundle of energy,” Lincoln says.

This was Connor’s second game this year, and, like most boys his age, he really wanted a baseball. Maybe a home run, or even one just tossed by an outfielder, or one of the opposing pitchers in the Reds’ bullpen.

“He wanted a ball so bad,” Lincoln remembers. She posted Connor’s story on Facebook, which is where I first saw it. Eventually, late in the game, a player had tossed a ball to somebody a few rows over. The man came over and gave Connor the ball.

He held it in his hands, joyous at receiving his first, real, Cardinals baseball. Maw-Maw took possession, and they planned to write the date on it and put it away for safekeeping when they got home. Soon, they moved down a few rows, where there were some open seats closer to the outfield wall.

That’s where they met River. He, like Connor, is 7. His family drove in for the game from Indiana, where they root for the Cardinals from afar. This was River’s first game in more than five years. He sadly confided to Connor: “I don’t think they’re tossing any balls into the stands today.”

Connor, focused on his own jubilation, set the record straight. He told the boy that not only were they tossing balls in the stands, he got one! River was saddened by this. Maw-Maw saw room for a lesson. She explained that Connor needed to think before he speaks, that sometimes he needed to put himself in somebody else’s shoes. “If it is not going to make them happy, you don’t need to say it,” she said.

The game went on. An inning or so later, Connor asked Maw-Maw for the ball, and then he inched over, slowly, to River, and gave away his prized possession. River was happy. Connor inched back, with all the adults telling him he didn’t have to do it. But Connor’s mind was made up.

“I can get one another game,” he said.

Soon a ball comes over the fence. There is a mad scramble. An older boy, maybe 10, grabs it. He saw Connor, who had been trying to reach it. The boy gave Connor the ball.

Two baseballs. Two happy 7-year-old boys. But this is not where the story ends. In the melee, River took an elbow to the face. He was crying. So another older boy, maybe 12, who had retrieved a ball earlier in the game, came over and gave River the ball. Now he had two baseballs. And he immediately gave one of them to the 10-year-old who had given a ball to Connor.

Three little boys went home with baseballs that day, because of the kindness in their hearts.

Lincoln was so proud of her grandson, and the other little boys who learned a bit that day about having a giving heart.

“If adults were this nice to each other,” she says, “the world would be a better place.”

Messenger: From Olympians in Tokyo to veterans in St. Louis, 'It's OK to not be OK'

Focus on mental health, for young athletes or for veterans, comes at an important time.

McClellan: A life at the edge of the harbor

The middle class is a safe harbor only if your family’s boat has been moored there for a couple of generations.

McClellan: An argument for fairness, redemption and economics

A sentence of 10 or 15 or 25 years seems appropriate for a guy who is messed up, but not homicidal.

Due to falling stones, Compton Hill Water Tower, one of three in St. Louis, remains closed while city leaders and preservationists look for solutions.

Connor Kaelin with a game ball.

Connor Kaelin on the lookout for a game ball.