A rendering of a proposed streetcar line in St. Louis. Courtesy of the St. Louis Streetcar Company. 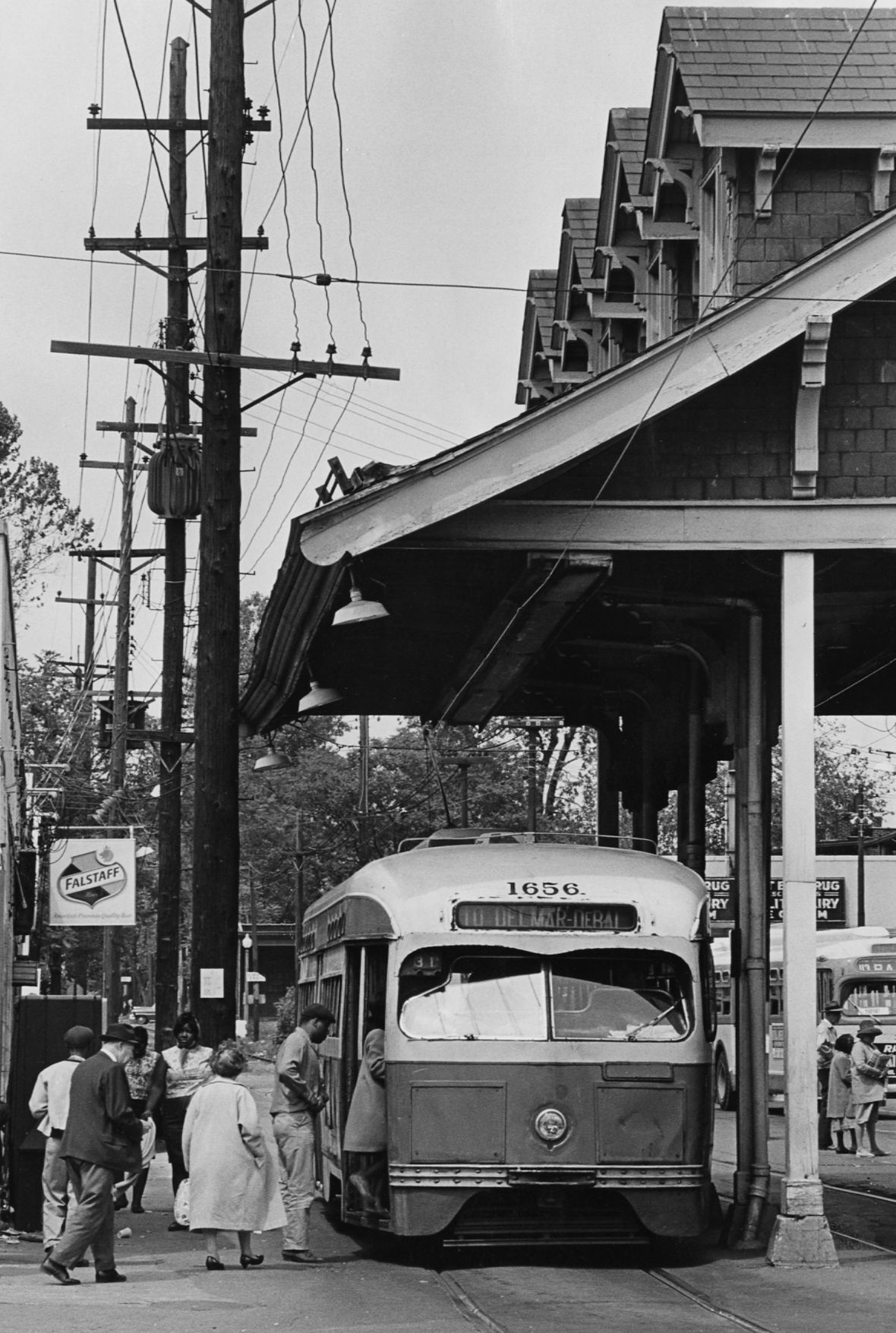 Passengers board a streetcar at the old Wellston Loop station on the last day. (Post-Dispatch) 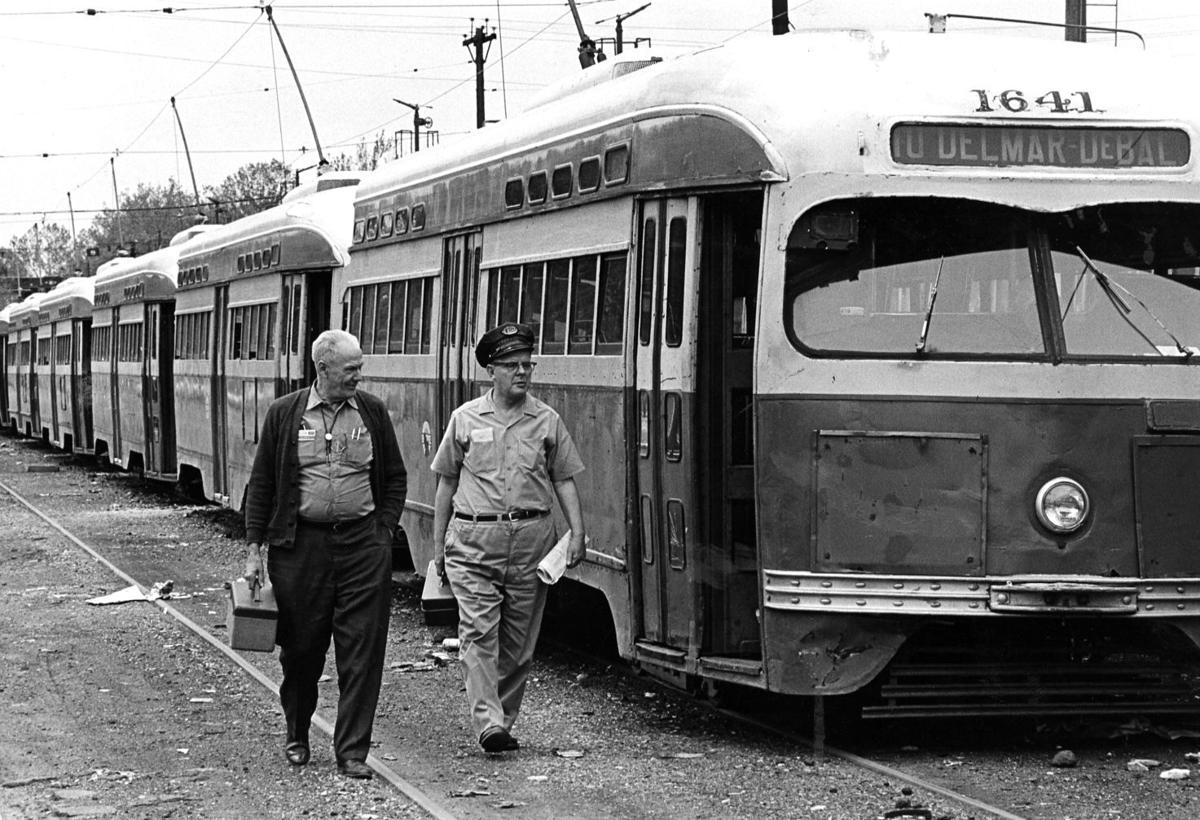 Jake Herin, left, and O.H. Deuchert get ready for their shift on May 21, 1966, the last day of streetcar service. Both men had been streetcar motormen their entire careers. Herin had the sad honor of taking the evening's last run.

A rendering of a proposed streetcar line in St. Louis. Courtesy of the St. Louis Streetcar Company.

Passengers board a streetcar at the old Wellston Loop station on the last day. (Post-Dispatch)

Jake Herin, left, and O.H. Deuchert get ready for their shift on May 21, 1966, the last day of streetcar service. Both men had been streetcar motormen their entire careers. Herin had the sad honor of taking the evening's last run.

The idea of a modern streetcar system in St. Louis got some buzz back in 2013, when a feasibility study said such a line could drive $540 million in economic development over five years, and a whopping $2.1 billion in 20 years.

Since then, proponents have been working on finding ways to build — and how to pay for — such a system in a city where the last streetcars shut down in 1966.

“There are plans out there, but nothing is moving,” said Matt Schindler, executive director of the St. Louis Streetcar Company, the group advocating for the project.

So his group is focusing on jump-starting the first phase of its ambitious project — seven miles of routes connecting downtown to north St. Louis and to the Grand Center, with a cost estimated between $218 million and $271 million.

To make that happen, Schindler says another study is needed to hammer out more details, including pinning down an exact route. Such a study will cost between $350,000 and $500,000, he said, some of which has already been raised.

His group sees the line as modern rail transit, a sharp contrast to the mental picture many have of a vintage trolley car clanging its way down the street.

Proponents say the line would be sleek cars on fixed-rail tracks, powered by overhead electrical wires with low-floor boarding for easy access. The concept is similar to light-rail trains, such as the MetroLink, but the cars run in the street with traffic with frequent stops, like a bus.

Eventually, more lines spanning the city are envisioned, including expansions to the Central West End and to Natural Bridge Road, and further south to Cherokee Street and South Grand, among others.

It could even connect with the Loop Trolley, a $43 million, two-mile line under construction that will connect the Delmar Loop to the Missouri History Museum.

“It depends where the momentum is,” Schindler said of future phases for the project.

He met with representatives of Mayor Francis Slay’s office in the past week to talk about the streetcar plan. That meeting included Josh Wiese, the mayor’s liaison for transportation projects.

Wiese said Thursday that discussions are under way within the mayor’s office about transportation funding priorities, and decisions are being made about which projects Slay will back. He said more information will be forthcoming in a few weeks.

Once the newest study is done, streetcar supporters can appeal to East-West Gateway, the region’s funding arm, for money, Schindler said.

As of now, no funds have been set aside for the project in that group’s plan for projects over the next 30 years. A streetcar line is classified as an “illustrative” project, which means it’s something the region would like to pursue, should funds become available.

But a shortage of federal dollars for such projects is a significant hurdle. Efforts last year to score federal funds for the streetcar project failed.

Many streetcar systems, though not all, have been built or are being built with the support of federal funds, according to a Congressional Research Service report published last year.

The report said the United States had 12 operating streetcar systems, seven new systems under construction and about 21 more in the planning stages.

Streetcar systems with the largest ridership include those in Philadelphia, New Orleans, San Francisco, Seattle and Memphis, Tenn.

“In some circumstances, streetcars can help attract and focus development by providing a more permanent transportation investment than buses and by promoting a walkable environment,” the report said.

That said, not all streetcar lines have succeeded in stimulating property development, according to the report, and there was no clear evidence as to whether streetcars attract new riders to transit.

But Schindler’s group sees real promise for development and riders. It estimates that about 7,700 people would ride the streetcar daily and that it would add 2,700 new riders to the transit system, giving a boost to MetroLink ridership.

And for now, Schindler is drumming up support anywhere he can, including at a meeting of the St. Louis Downtown Neighborhood Association on Monday, where he encouraged residents to call their aldermen and the mayor’s office to voice their support.

“We’re trying to motivate people to see what it could be,” he told them.

With any luck, a streetcar could be up and running by 2022.

Plaintiffs say the project will go beyond its authorized boundaries

Public gets a look at St. Louis streetcar proposal

The main line would link downtown and the Central West End.

Streetcars could ride rails from downtown to Central West End

Along for the Ride: Closed Kirkwood parking lot causes a stir

City and lot's owner can't come to an agreement, so it has been shut for two months.

Along for the Ride: Local transportation planning adapts to conservative times

Given lack of funds, new East-West Gateway chief says preservation must be priority

Intersection of Skinker and Delmar to close Monday

Traffic to the Delmar Loop will be detoured on Forest Park Parkway, Big Bend Boulevard and DeBaliviere Avenue

Delmar and Skinker closed; some cutting through Shell lot

Intersection to be shut down for 12 days

Car to be tested first is from Portland, Ore., and carries the number 001