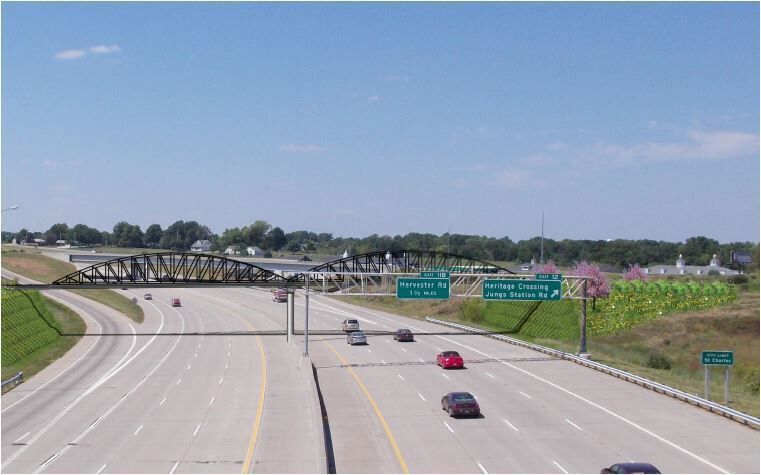 A rendering of the planned Centennial Greenway bridge over Highway 364 (the Page Avenue extension) in St. Charles.

A rendering of the configuration of the planned Centennial Greenway bridges over Highways 94 and 364 in St. Charles.

A rendering of the planned Centennial Greenway bridge over Highway 364 (the Page Avenue extension) in St. Charles.

A rendering of the configuration of the planned Centennial Greenway bridges over Highways 94 and 364 in St. Charles.

ST. CHARLES • Motorists venturing near where Highway 94 joins together with Highway 364, also known as the Page Avenue extension, are used to encountering road construction.

But a new project in that area isn’t about changes in highway traffic. Work began in mid-March on a milelong pedestrian and bicycle trail that will include separate bridges across 364 and 94.

The project, part of the regional Great Rivers Greenway district, will provide easy access for walkers and bicyclists northwest of the two busy highways to an existing trail segment on the other side.

That current 2.2-mile stretch in turn links to the Katy Trail near the Missouri River, the Highway 364 bridge over the river and trails on the St. Louis County side.

“Any time you can connect people to having direct access to the Katy Trail — the superhighway of trails in Missouri — is a wonderful opportunity,” said project manager Patrick Owens.

St. Charles County Executive Steve Ehlmann, at a gathering in February to herald the start of the project, called it “a game-changing connection.”

Also on the existing trail segment is the St. Charles County Heritage Museum. The trail is called the Centennial Greenway, part of a system of paths across the metro area being developed by Great Rivers.

The new trail extension will end at Old Highway 94. From there, people will be able to use city streets to bike to Schaefer and Wapelhorst parks in St. Charles and Laurel Park in St. Peters. Plans are afoot for a new trail along part of the route to the St. Peters park.

The Centennial extension segment is costing about $5 million, Owens said.

Planners opted to build no-car, 10-foot-wide bridges over the two highways, he said, after determining that it would cost more to instead build an attached trail structure to the Heritage Crossing street overpass above 364-94 where the two roads run jointly.

He said the utility lines running through there, the lack of an existing pedestrian path and significant elevation changes helped hike the Heritage Crossing cost.

Bridges set aside for trail users also are safer, he said.

In addition to the bridges, the trail extension includes a path between the two spans, a rest area and landscaping native to the vicinity. The price tag also covers constructing retaining walls, grading and building up abutments.

The project is expected to be done by mid-2018.

The bridges are similar, Owens said, to the one over Interstate 44 in the Kirkwood area that carries Grant’s Trail, also known as Gravois Greenway, which was begun by the private Trailnet organization.

Great Rivers also has a trail bridge over River des Peres in south St. Louis and several that cross or run next to creeks.

The St. Charles bridge project is among several ongoing Great Rivers projects. Among them:

Work will begin later this year on a greenway path from Sarah Street to Boyle Avenue in St. Louis’ Cortex area.

The greenway agency also has been heavily involved in the renovation of the Gateway Arch grounds. Money from a separate sales tax collected only in St. Louis and St. Louis County is helping pay for that project.