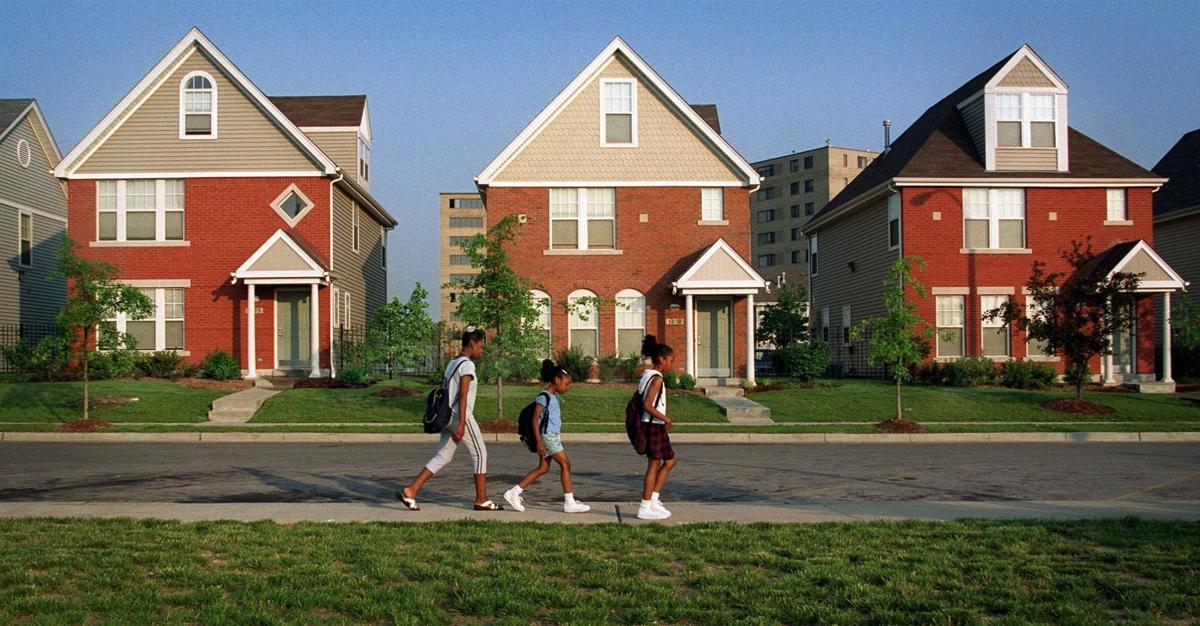 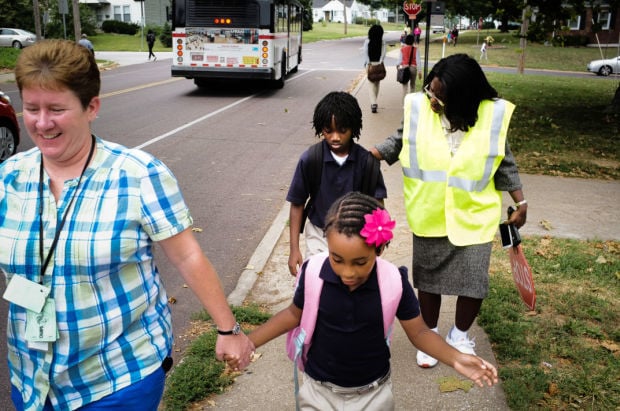 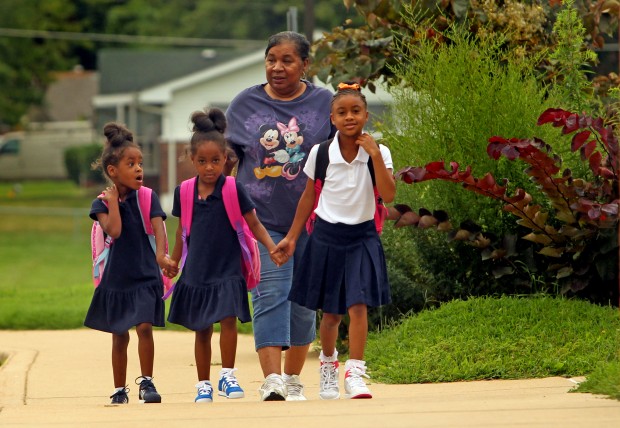 Twins Dominique and Dorianne Spinks, 5, and their sister Lauren Thompson, 9, walk to school with their grandmother on the first day of school on Monday, Aug. 12, 2013, at Meadows Elementary School in Moline Acres. Meadows Elementary is part of the unaccredited Riverview Gardens School District. Photo by Laurie Skrivan, lskrivan@post-dispatch.com

Twins Dominique and Dorianne Spinks, 5, and their sister Lauren Thompson, 9, walk to school with their grandmother on the first day of school on Monday, Aug. 12, 2013, at Meadows Elementary School in Moline Acres. Meadows Elementary is part of the unaccredited Riverview Gardens School District. Photo by Laurie Skrivan, lskrivan@post-dispatch.com

Walking or biking to school was once a daily routine for a lot of kids.

“It was almost a rite of passage,” said Jennifer Sisul, principal of Robinson Elementary School in Kirkwood, where a Trailnet workshop last month focused on building walk-to-school programs.

But as this school year begins, that rite is happening less often than in years past.

In 1969, about half of children ages 5 to 14 walked or biked to school. That number has dropped to 13 percent in recent years, according to the National Center for Safe Routes to School.

And of the children who lived within a mile of school those decades ago, 89 percent usually walked or biked to class; that number has dipped to 35 percent, according to the most recent data available cited by the group.

“I think those numbers are true for the St. Louis area,” said Taylor March, school and educational programs manager for Trailnet.

Distance to school was the top factor that parents said prevented their children from walking to school, according to a survey cited by the safe-routes group. Traffic-related dangers came in next, with worries about bad weather and crime taking third and fourth places.

In St. Louis, those fears mainly are traffic speed, crime and whether street crossings are safe, March said.

So Trailnet is working with local schools to help them encourage students to hoof it or pedal to class through programs including walk-to-school days — which have been very popular at schools including Farragut Elementary in north St. Louis — and to make the walk safe.

And at Edgar Road Elementary in Webster Groves, a whopping 75 percent of students have walked or biked to school on days when “walking school buses,” in which kids are picked up along the way to walk to school, are organized, March said.

“We’re a neighborhood school,” said Brad Jordan, a physical education teacher at Edgar Road. “I think the parents and the kids feel safe walking to school.”

He said biking and walking to school is part of the culture of the school, which is in a residential neighborhood and provides crossing guards.

The Trailnet workshop focused on ideas for schools to try to boost their walk-to-school numbers.

“Small to start is fine,” said Eric Bjorlin, school programs manager for the Active Transportation Alliance in Chicago, at the workshop.

He suggested rewards to recognize those who walk to school, such as with an announcement over the loudspeaker or giving those students an five extra minutes of recess.

“Those things can help, and they don’t cost money,” Bjorlin said.

And he touted walking and biking to school as a way to jump-start kids’ brains before even getting to class.

Students tested better in reading, spelling and math and were more likely to read above their grade level after 20 minutes of physical activity, according to the Active Living Research group.

Becky Reinhart is a healthy communities coordinator at Beyond Housing, a nonprofit community development and housing organization who works with the Normandy School District.

She is using a survey she got at the workshop to give Normandy parents to gauge their level of interest and see what parents want to allow their children to walk to school.

Many students at some of the schools already walk to school, Reinhart said, so she hopes to help make that walk as safe and easy as possible.

They know it can be difficult to carve out extra time in the morning for walking, so they mulled over ideas such as organizing a rotation of parents to walk with kids. And they wondered how to include the small number of youngsters who would have to cross Manchester Road to get to school.

They each live about a mile from school and their kids walk every day but need only cross a few residential streets along the way. They are active in the school’s parent-teacher association and hope to organize walk-to-school events that will continue year after year, even when their children grow out of the school.

“We want to find a program that will outlive us,” LeGrand said.

When giving your child some freedom could land you in jail

An idea that seemed ludicrous 30 years ago became a parenting reality.

Construction of a southbound left-turn lane from Edgar Road onto Garden Avenue in Webster Groves is complete, Webster University said.

The lane was a condition imposed by the city for a parking-garage expansion on the campus. That expansion was needed to meet the city's parking requirements for the yet-to-be-built Interdisciplinary Science Building, the university said.

The city and university worked out an agreement in March in which the university agreed to pay for the construction — a cost of about $357,000. The city then managed the work.

Plan is modeled after trail in Indianapolis, which cost about $88 million to build