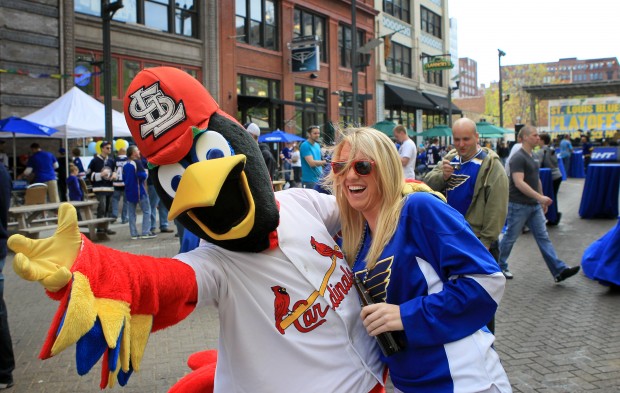 Fredbird and Kara Lawrence, from Fenton, party on Washington Avenue in St. Louis during a rally for the St. Louis Blues on Thursday, April 12, 2012. Photo by David Carson, dcarson@post-dispatch.com 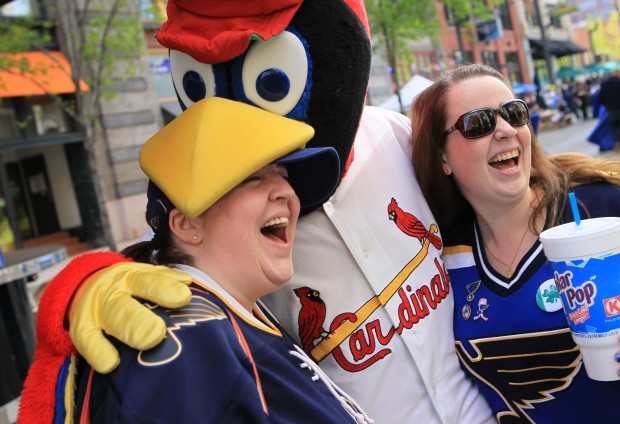 Sisters Tracy Williams (left) and Kristi Williams, both from St. Louis, pose with the St. Louis Cardinals mascot Fredbird during a rally for the St. Louis Blues on Washington Avenue on Thursday, April 12, 2012. Photo by David Carson, dcarson@post-dispatch.com

Fredbird and Kara Lawrence, from Fenton, party on Washington Avenue in St. Louis during a rally for the St. Louis Blues on Thursday, April 12, 2012. Photo by David Carson, dcarson@post-dispatch.com

Sisters Tracy Williams (left) and Kristi Williams, both from St. Louis, pose with the St. Louis Cardinals mascot Fredbird during a rally for the St. Louis Blues on Washington Avenue on Thursday, April 12, 2012. Photo by David Carson, dcarson@post-dispatch.com

ST. LOUIS • The rubber is really going to meet the road this weekend in downtown St. Louis.

Tires? Sure, there will be plenty of cars descending on downtown for the Cardinals’ first home series of the season, the Blues playoff match with the San Jose Sharks, the National Rifle Association convention at America’s Center, and Sunday’s GO! St. Louis marathon.

But what has traffic planners on a high state of readiness will be the pitter patter of thousands — make that tens of thousands — of walking and running shoes when visitors hit downtown.

Beginning with the Cardinals’ home opener this afternoon against the rival Chicago Cubs, downtown St. Louis will play host to four major events this weekend and each is expected to attract thousands of spectators and participants.

The Missouri Department of Transportation has suspended much of its seismic work on the double-deck section of Highway 40 (Interstate 64).

Downtown St. Louis streets will remain open today and Saturday, but will be closed Sunday morning for the GO! St. Louis marathon and half-marathon, event planners and streets officials said. The streets near Busch Stadium will reopen in time for Sunday’s series finale.

That doesn’t mean there won’t be some fleeting chokepoints.

Traffic should be heavy before and after the Cardinals games and the second game of the Blues playoff hockey series against the San Jose Sharks on Saturday night.

MoDOT will have one lane of eastbound Highway 40 from 11th Street to 8th street closed from 6 a.m. to 3 p.m. Saturday, weather permitting. All ramps will remain open. One westbound lane will be closed between 10th and 14th Street during that time.

Waelterman said the varying start and ending times of this weekend’s events should keep vehicle traffic from becoming too congested at any one time. Still, the streets department has developed four traffic cycles to time lights as if it were rush hour conditions in and out of the city.

Cardinals fans are expected to begin tailgating before the afternoon games and should be noticeable as far south as Soulard and reach north to Kiener Plaza.

Parking for the Cardinals series could prove more difficult with the tent belonging to the Cavalia touring show still set up in one of the Cardinal parking lots.

Sunday’s GO! St. Louis marathon, half marathon and marathon relay is expected to attract 16,000 runners, said Brian Lyons, director of race management. It will require the closure of Market Street between 18th Street and Tucker Boulevard starting at about 4 a.m. to set up the start line.

Organizers will close numerous streets from downtown to the Anheuser-Busch brewery starting at about 6:30 a.m. The marathon course also extends west into Forest Park. Highway 40 ramps at 20th and Chestnut and Sixth Street will be closed early Sunday but reopen by 10 a.m.

Waelterman said the closures east of Tucker Boulevard are expected to be clear by 10 a.m.

Meantime, Waelterman said the city has worked to accommodate people arriving for an NRA prayer breakfast on Sunday morning as well.

Traffic planners have dealt with multiple events in downtown St. Louis, he said. But this weekend’s draw will have a different feel — especially for the professional sporting events.

Cardinal fans, after waiting out the rain, shiver at home opener

Family of 10 Cardinal fans from Oklahoma City searches for blankets.

Columnist Jeff Gordon jumps in at 1 p.m. and chats with fans until the Cards-Cubs game ends.

Outward signs of the Cardinals' championship will be everywhere this weekend.

ST. LOUIS • Parking meters in part of downtown will be free after 1:15 p.m. today to accommo…

Romney's relationship with gun enthusiasts in the spotlight as NRA comes to St. Louis

Mitt Romney has had trouble demonstrating familiarity with hunting and firearms.

About 70,000 National Rifle Association members are expected at America's Center.

The Cardinals' newest world championship flag is now flying at Busch Stadium, where the Cards and Cubs will play the home opener.

Out of the presidential race, Santorum will still address NRA convention

Santorum will speak at the NRA convention, despite dropping out of the presidential race earlier in the week.

At NRA convention, Romney shares the stage with his 'sweetheart'