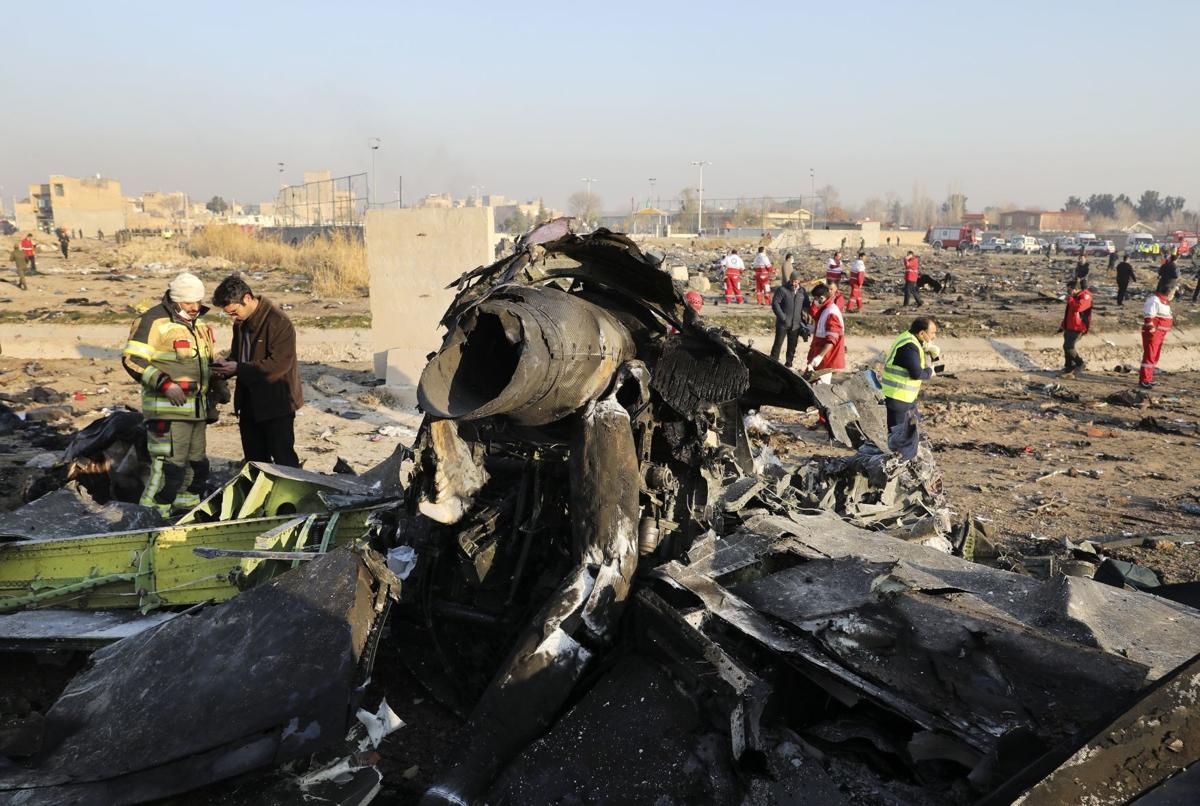 FILE - In this Wednesday, Jan. 8, 2020 file photo, debris at the scene where a Ukrainian plane crashed in Shahedshahr southwest of the capital Tehran, Iran. Iran announced Saturday, Jan. 11, that its military “unintentionally” shot down the Ukrainian jetliner that crashed earlier this week, killing all 176 aboard, after the government had repeatedly denied Western accusations that it was responsible. (AP Photo/Ebrahim Noroozi, File) 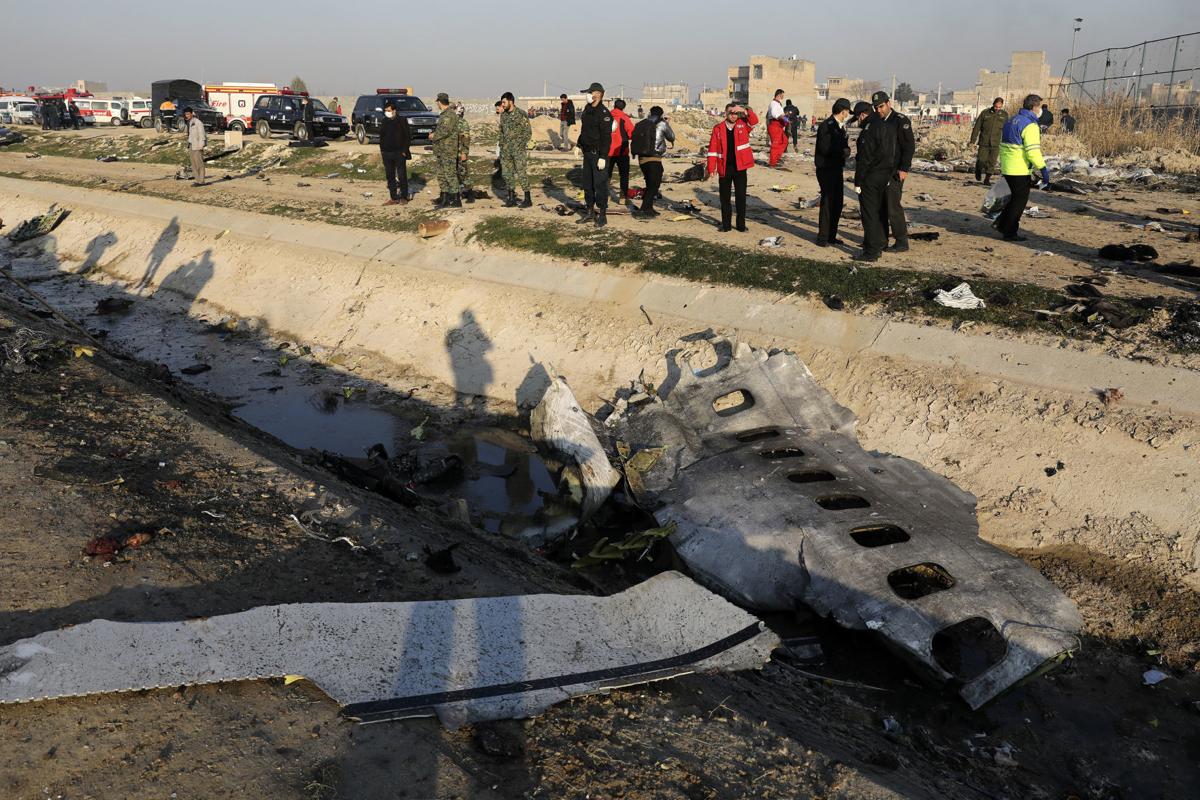 FILE - In this Jan. 8, 2020, photo, debris is seen from an Ukrainian plane which crashed as authorities work at the scene in Shahedshahr, southwest of the capital Tehran, Iran. Iran announced Saturday, Jan. 11, that its military “unintentionally” shot down the Ukrainian jetliner that crashed earlier this week, killing all 176 aboard, after the government had repeatedly denied Western accusations that it was responsible. (AP Photo/Ebrahim Noroozi, File)

TEHRAN, Iran — In the face of mounting evidence, Iran on Saturday acknowledged that it shot down the Ukrainian jetliner by accident, killing all 176 people aboard. The admission by Iran’s Revolutionary Guard undermined the credibility of information provided by senior officials, who for three days had adamantly dismissed allegations of a missile strike as Western propaganda.

It also raised a host of new questions, such as why Iran did not shut down its international airport or airspace on Wednesday when it was bracing for the U.S. to retaliate for a ballistic missile attack on two military bases housing U.S. troops in Iraq. No one was hurt in that attack, carried out in retaliation for the killing of Iranian Gen. Qassem Soleimani in an American airstrike in Baghdad.

Iran's acknowledgment alters the narrative around its confrontation with the U.S. in a way that could anger the Iranian public. Iran had promised harsh revenge after Soleimani's death, but instead of killing American soldiers, its forces downed a civilian plane in which most passengers were Iranian.

On Saturday night, hundreds gathered at universities in Tehran to protest the government's late acknowledgement of the plane being shot down. They demanded officials involved in the missile attack be removed from their positions and tried. Police broke up the demonstrations.

President Donald Trump tweeted messages of support to Iranians who back protests of the government, saying he and his administration are behind them. In the tweets, Trump called on the Iranian government to allow human rights groups to monitor the protests and expressed support for the “brave, long-suffering people” of Iran.

Gen. Amir Ali Hajizadeh, the head of the Guard's aerospace division, said his unit accepts full responsibility for the shootdown. In an address broadcast by state TV, he said when he learned about the downing of the plane, “I wished I was dead.”

He said he raised the possibility to his superiors that his forces shot down the plane as early as Wednesday morning because “the simultaneous occurrence of the launch and crash was suspicious.”

Hajizadeh said Guard forces ringing the capital had beefed up their air defenses and were at the “highest level of readiness,” fearing that the U.S. would retaliate. He said he suggested Tehran should close its airspace but no action was taken.

He said the airline's pilot and crew had done nothing wrong, but an officer made the “bad decision” to open fire on the plane after mistaking it for a cruise missile.

“We were prepared for an all-out conflict,” he said.

Iran's supreme leader, Ayatollah Ali Khamenei, expressed his “deep sympathy” to the families of the victims and called on the armed forces to "pursue probable shortcomings and guilt in the painful incident.”

Ukraine's President Volodymyr Zelenskiy thanked the U.S, Britain, Canada and others for information about the crash and their support. He said that “undoubtedly helped” push Iran to acknowledge its responsibility for the crash. Zelenskiy said the crash investigation should continue and the “perpetrators” should be brought to justice.

The Ukrainian airline criticized Iran's decision to leave its airspace open despite the hostilities.

“It's absolutely irresponsible,” Ukraine International Airlines vice president Ihor Sosnovskiy told reporters. “There must be protection around ordinary people. If they are shooting somewhere from somewhere, they are obliged to close the airport."

The plane, en route to the Ukrainian capital of Kyiv, was carrying 167 passengers and nine crew members from several countries, including 82 Iranians, 57 Canadians — including many Iranians with dual citizenship — and 11 Ukrainians, according to officials.

Iranians had rallied around their leaders after the killing of Soleimani, who was seen as a national icon for building up armed groups across the region that project Iranian influence and battle the Islamic State group and other perceived enemies.

Hundreds of thousands had attended funeral processions across the country in a show of support for the Islamic Republic just weeks after authorities had quashed protests ignited by a hike in gasoline prices. Iran has been in the grip of a severe economic crisis since Trump withdrew the U.S. from the 2015 nuclear deal and imposed crippling sanctions.

The shootdown of the plane and the lack of transparency around it, along with the restrained response to the killing of Soleimani, could reignite anger at the country's leadership.

President Hassan Rouhani acknowledged Iran's responsibility but blamed the downing of the plane in part on “threats and bullying” by the United States after the killing of Soleimani. He expressed condolences, calling for a full investigation and the prosecution of those responsible.

Iran's Foreign Minister Mohammad Javad Zarif also deflected some of the blame, tweeting that “human error at time of crisis caused by US adventurism led to disaster."

The jetliner, a Boeing 737, went down on the outskirts of Tehran early Wednesday shortly after taking off from Imam Khomeini International Airport.

The U.S. and Canada, citing intelligence, said they believed Iran shot down the aircraft with a surface-to-air missile, a conclusion supported by videos verified by The Associated Press.

Videos verified by The Associated Press show the final seconds of the Ukrainian International airliner and what likely brought it down, killing all 176 people on board.

“This is the right step for the Iranian government to admit responsibility, and it gives people a step toward closure with this admission," said Payman Parseyan, a prominent Iranian-Canadian in western Canada who lost a number of friends in the crash.

“I think the investigation would have disclosed it whether they admitted it or not. This will give them an opportunity to save face.”

As recently as Friday, Ali Abedzadeh, the head of the national aviation department, had told reporters “with certainty” that a missile had not caused the crash.

On Thursday, Cabinet spokesman Ali Rabiei dismissed reports of a missile, saying they “rub salt on a painful wound” for families of the victims.

Ukraine's president said its team of investigators, who are already on the ground in Iran, should continue their work with “full access and cooperation.”

Rouhani spoke Saturday with Canadian Prime Minister Justin Trudeau and said the investigation was progressing rapidly. His website quoted him accusing the United States of driving the situation in the Middle East to a “dangerous level” and said all should try to return “full stability and security” to the region.

After the call, which was unusual because Canada severed diplomatic relations with Iran in 2012, Trudeau said Iran's acknowledgment was a first step but “many more steps must be taken.” He demanded a complete investigation and for Iran to take full responsibility for shooting down the plane, including the payment of compensation to the families of the dead.

While the dead included 57 Canadians, a total of 138 of the passengers were headed to Canada, many of them international students.

The Ukrainian president, who also spoke with Rouhani on Saturday, said his government will also push Iran to compensate victims' families.

Iran's semi-official Fars news agency reported that the supreme leader on Friday morning had ordered top security officials to review the crash and announce the results.

“If some individuals, in any position, were aware of the issue but made statements contradicting the reality or hid the truth for any reason, they should be named and tried," said Fars, which is close to the Guard.

Others speculated that the security forces may have concealed information from civilian authorities.

“Concealing the truth from the administration is dreadful," Mohammad Fazeli, a sociology professor in Tehran, wrote on social media. “If it had not been concealed, the head of civil aviation and the government spokesmen would not have persistently denied it.”

Late Saturday, Britain accused Iran of violating international law after its ambassador was arrested and briefly detained during protests in Tehran. Iranian media said ambassador Rob Macaire was arrested outside a university and detained for more than an hour before being released.

U.K. Foreign Secretary Dominic Raab said "the arrest of our ambassador in Tehran without grounds or explanation is a flagrant violation of international law.”

Including 'Your Daily 6' and the top story of the morning, it's the news you need to know to start your day.

The dinosaur was about the size of a raven but double its length with a long, bony tail. Its entire body was covered with feathers, complete with two plumes at the tail's end.

A 3-year-old Malaysian boy living in the UK has become the youngest member to join Mensa UK, the largest and oldest international high IQ soci…

Doomsday Clock closer than ever to midnight: Here's why that matters

Midnight on the Doomsday Clock symbolizes the end of the world, and the clock was reset Thursday to just 100 seconds before midnight.

The prince's departure from the UK follows a turbulent period in which Harry and Meghan agreed to give up their royal titles and end their official duties. Here are the latest "Megxit" updates.

Events this week and next focus on commemorating the genocide of 6 million Jews who died in death camps during World War 2. Here's a photo essay on Auschwitz, liberated 75 years ago this month.

President Trump has forced asylum seekers to remain in Mexico, or apply in Central American countries, effectively removing one of the escape valves for previous caravans.

Parts of Australia were pelted by hailstones the size of golf balls, big enough to smash car windows and injure birds, after the region was hit by dust storms.

LONDON (AP) — Terry Jones, a founding member of the anarchic Monty Python troupe who was hailed by colleagues as “the complete Renaissance comedian" and “a man of endless enthusiasms,” has died at age 77 after suffering from dementia.

The first U.S. case of the Wuhan coronavirus has been confirmed in Washington State. Six people have died and nearly 300 have been infected in China.

Images of starving lions at a zoo in Sudan drew impassioned responses from around the world. Warning: This story contains graphic photos.

FILE - In this Wednesday, Jan. 8, 2020 file photo, debris at the scene where a Ukrainian plane crashed in Shahedshahr southwest of the capital Tehran, Iran. Iran announced Saturday, Jan. 11, that its military “unintentionally” shot down the Ukrainian jetliner that crashed earlier this week, killing all 176 aboard, after the government had repeatedly denied Western accusations that it was responsible. (AP Photo/Ebrahim Noroozi, File)

FILE - In this Jan. 8, 2020, photo, debris is seen from an Ukrainian plane which crashed as authorities work at the scene in Shahedshahr, southwest of the capital Tehran, Iran. Iran announced Saturday, Jan. 11, that its military “unintentionally” shot down the Ukrainian jetliner that crashed earlier this week, killing all 176 aboard, after the government had repeatedly denied Western accusations that it was responsible. (AP Photo/Ebrahim Noroozi, File)