29 • Even the St. Paul sandwiches are going vegan
0 comments
Share this
{{featured_button_text}}
1 of 4 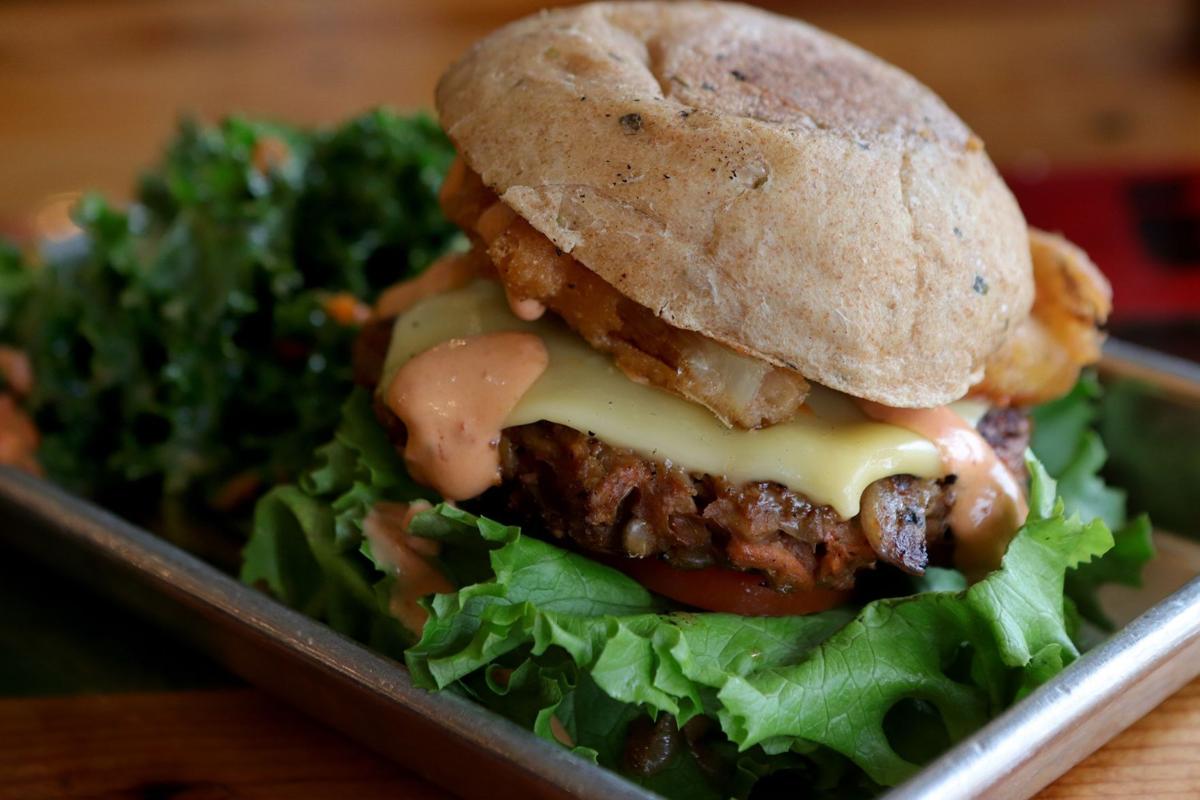 A Southwest veggie burger with kale salad at Sweet Art 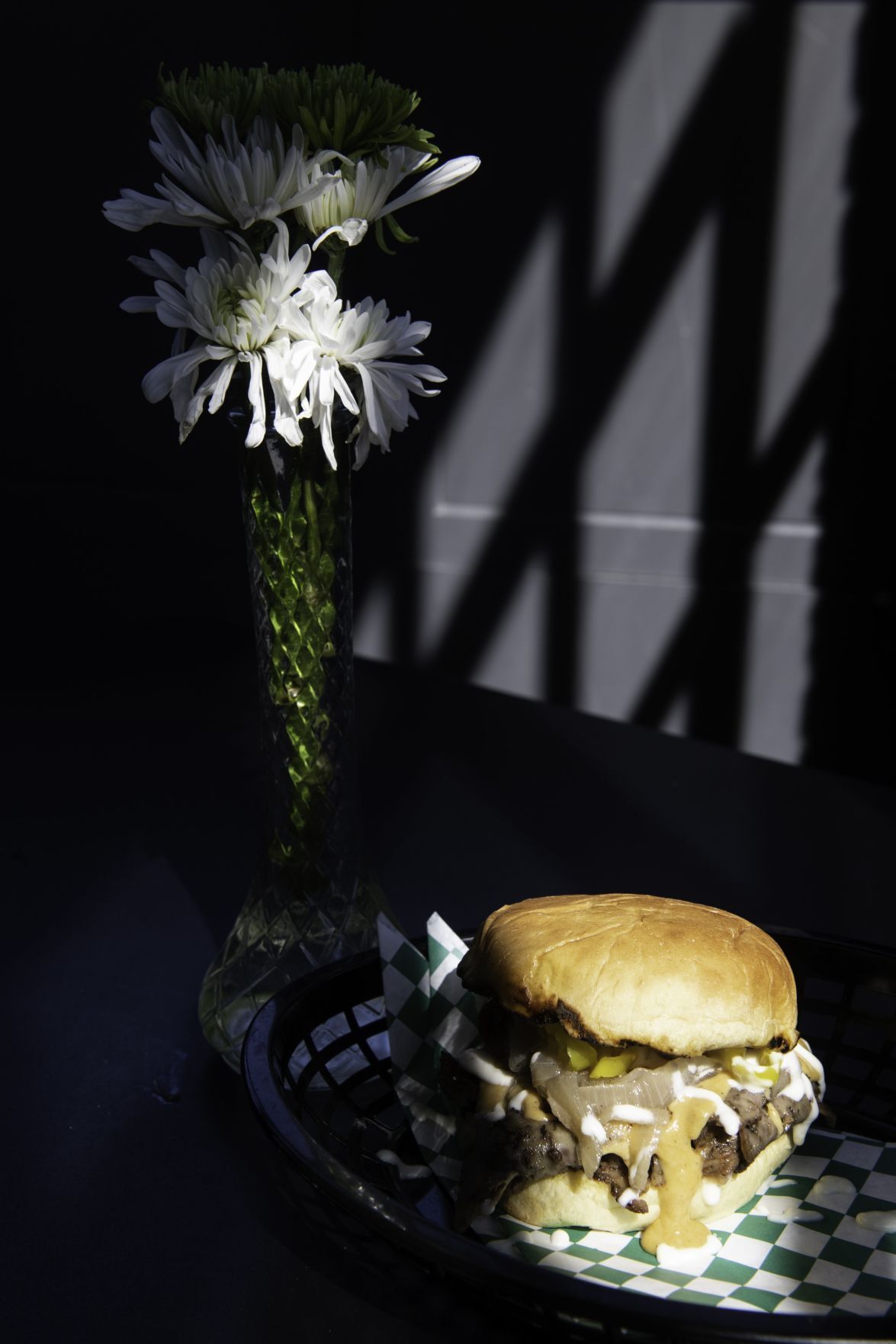 A vegan Roast Beef and Chedda sandwich at Utah Station 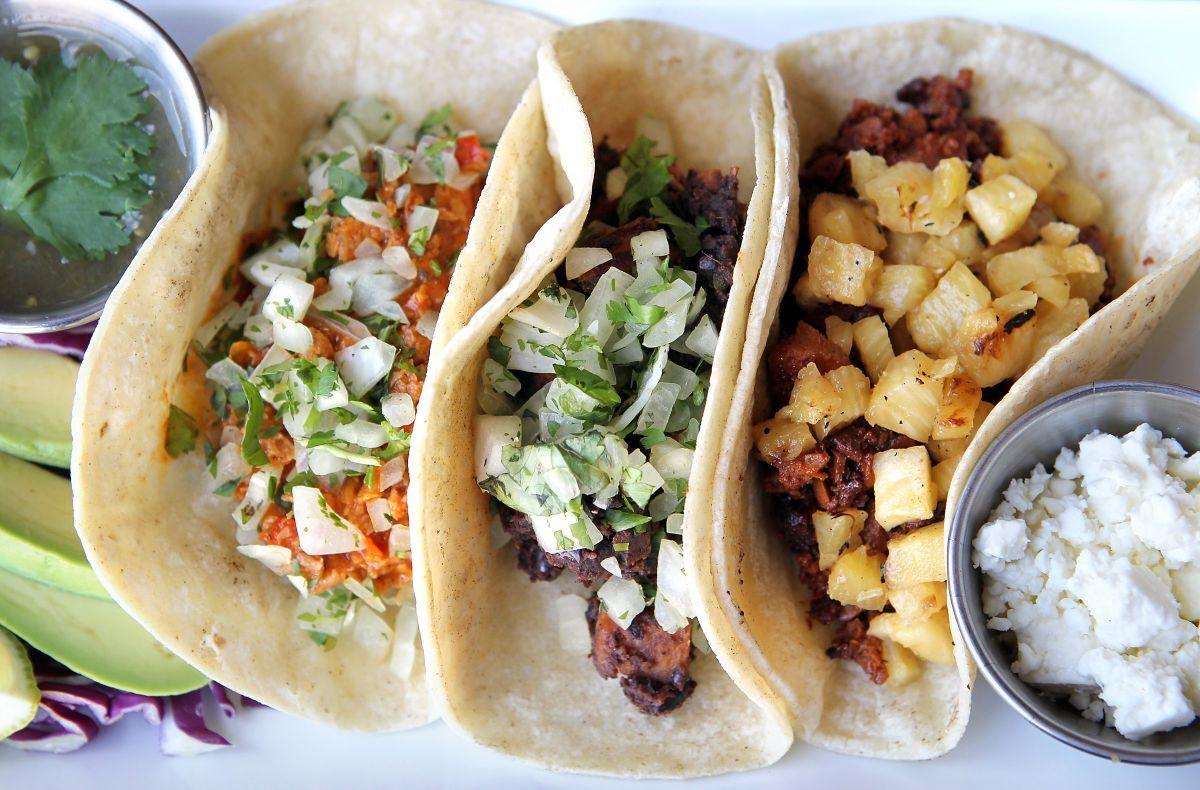 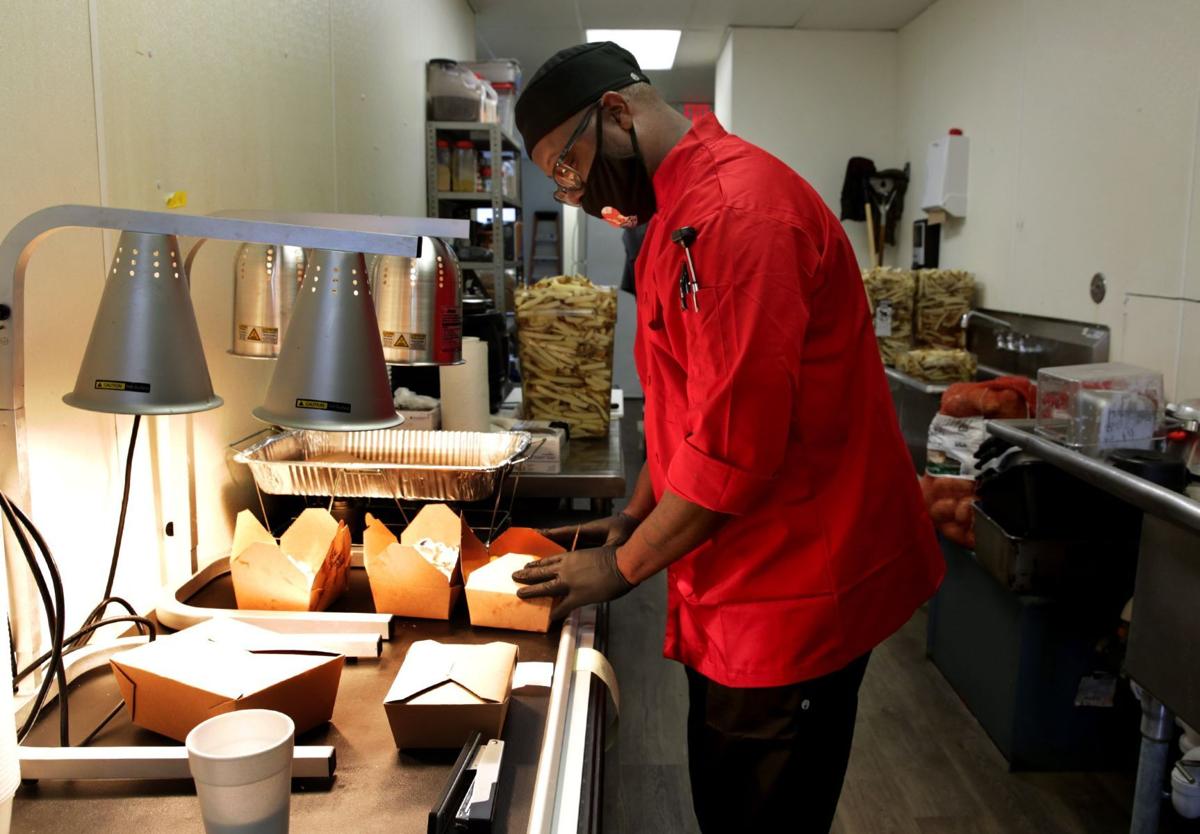 Jason Lamont, chef and co-owner of Love at First Bite in St. Ann, packages orders Sept. 24, 2020, in the restaurant's kitchen.

Vegetarian. Vegan. Plant-based. However you describe your diet — or whichever diet has intrigued your omnivorous self — St. Louis chefs have the range to impress or convince you: Reine Bayoc of SweetArt in Shaw, Natasha Kwan of Frida’s in University City, Bay Tran of Tree House in Tower Grove South.

The future looks bright. The past year has seen faux-meat whiz Chris Bertke popping up his Vegan Deli & Butcher concept following stints at Utah Station in Benton Park and inside Peace Love Coffee in St. Charles. Love at First Bite, which opened in September in St. Ann, serves meat — plenty of it — but chef-owner Jason Lamont also offers a vegan St. Paul Sandwich.

“You can’t get that anywhere (else) in St. Louis,” he told the Post-Dispatch last year. “Not yet.”

In his 50 years as director of the Missouri Botanical Garden, Peter Raven saw a lot of growth. At age 84, he's still dedicated to plants (and …

The publication date of this special edition of the STL 100 marks 400 days since the last time I ate inside a restaurant dining room. As you can imagine, the seventh annual STL 100 is a vastly different kind of project from the previous six.

I have eaten many great takeout meals over the past 400 days, from both old favorites and restaurants that managed to open during the pandemic, but it isn’t yet the time — and the 2021 STL 100 isn’t the place — for a return to reviews, stars and rankings.

Instead, my colleagues and I wanted to celebrate the people, restaurants and foods we love and have missed. You will find stories of pandemic endurance, pivots and community stories. There are chats about cevapi and snoots, zero-proof cocktails and toasted ravioli, seasoning turkey and shipping chocolate.

We will keep eating and talking and writing about St. Louis foods and restaurants and the people who make them.

And, as for myself, after the past 400 days, I’m hungrier than ever. By Ian Froeb

3 • Sometimes, goodbye is not forever

"They’ve been knocking on the door every day, asking when I’m opening,” Joe Dixon told the Post-Dispatch last November as he prepared to debut Dixon’s BBQ in Overland.

Dixon was talking about his restaurant’s new neighbors, but he just as well could have been addressing all of us who had been craving his signature burnt ends and chicken tips since he had closed midtown’s Dixon Smoke Co. in 2018.

Restaurant comebacks are not unheard of, but they should never be taken for granted.

Dixon’s returned after two years and change. Midtown movers-and-shakers lunch institution Beffa’s had been silent for nine years when it reopened in March 2020.

Fourth-generation owner Paul Beffa was in high school when his parents closed the original restaurant, ending a 113-year run. After studying real estate and finance in college, he decided he wanted to take a shot at bringing the family business back.

This year has already teased another possible comeback. Anthony Ellerson staged a February-long pop-up of the Kitchen Sink, the acclaimed Cajun- and Creole-influenced restaurant he operated from 2012 to 2017.

This summer, Ellerson told the Post-Dispatch in February, “the Kitchen Sink will be back 100%.” By Ian Froeb

There were projects that had already been underway for months (Logan Ely’s the Lucky Accomplice; see No. 7) or more than a year (acclaimed chef Ben Grupe’s solo debut, Tempus).

Some concepts leaned into the moment with takeout-only storefronts (Jason Lamont’s Love at First Bite in St. Ann). Others made unabashedly splashy debuts (Casa Don Alfonso and Tony’s in Clayton, see No. 10).

In a year when we were primed for restaurant closures — and counted more than we would have liked — the number of restaurants that opened in spite of the pandemic was as heartening as it was surprising. By Ian Froeb

Chart of the week: Margin debt

10 • Aiming for the stars in Clayton

No one knows exactly what the post-pandemic dining landscape will look like — or when the post-pandemic period will begin — so I admire the courage of the restaurants betting on at least some demand for a luxury experience.

Fine-dining institution Tony’s, which relocated in March from downtown to the Centene Plaza tower in Clayton, boasts a dining room with $2,300 chairs and a wall-sized painting commissioned from Los Angeles artist America Martin.

Meanwhile, the nearby Ritz-Carlton, St. Louis has turned to a Michelin-starred establishment, Don Alfonso 1890 in Sant’Agata sui Due Golfi, Italy, for its new restaurant, Casa Don Alfonso. By Ian Froeb

The kitchen at Liliana’s Italian Kitchen is small — it has only six burners, for example — but during the pandemic it has found a way to stretch to handle dine-in service, delivery orders and customers at the drive-thru window.

He and his wife, Kathy, inherited the drive-thru window from a previous tenant of the South County storefront, and before the pandemic, drive-thru customers accounted for around 20% of Liliana’s business.

At the height of last year’s shutdowns, that figure rose to 80%. Even now, as indoor-dining capacity expands, it remains at about 60%.

For Liliana’s, Pieri says, “the new normal is definitely going to (include) pickup. I’d say it’s probably going to be 50-50 — maybe 60% dining room.” By Ian Froeb

While the pandemic might have disrupted the literal meaning of “counter service” in some cases, the format remains a force in St. Louis dining, from the curries and dosas of the Curry Club in Chesterfield to the kimbap, rice bowls, and Korean soups and stews at Sides of Seoul in Overland to the nationally acclaimed Balkan Treat Box in Webster Groves. More recent additions to the category include two Central West End standouts: ReVoaked Sandwiches from chef Stephan Ledbetter (Oaked, the Gamlin Restaurant Group) and Zenwich, with ramen and sandwiches from Blue Ocean Sushi owner Chai Ploentham. By Ian Froeb

What are the “best new restaurants” of the past year? I don’t know. Frankly, with vaccination ongoing and many dining rooms operating below 100% capacity (and some remaining temporarily closed), it doesn’t feel appropriate or practical to evaluate such a question yet.

9 Mile Garden would have been a smart idea even if an outdoor dining space with ample room for spreading out hadn’t become a necessity, even if food trucks hadn’t seen many of their usual haunts empty out as people worked from home.

The appeal is clear: a daily lunch and dinner spot offering a rotating roster of trucks, some of which diners might not have the opportunity to track down elsewhere.

The appeal also seems to be growing. The list of participating trucks curated by 9 Mile Garden managing partner Brian Hardesty (himself co-owner of the first-generation St. Louis food truck Guerrilla Street Food) has increased from around two dozen last year to more than 40 this season. By Ian Froeb

Look: I don’t know when I’ll be ready to plunge into a teeming mass of people again, even post-vaccination, but I suspect the return of our great festivals — the various Greek festivals, the Japanese Festival at Missouri Botanical Garden and especially the greatest of them all, the Festival of Nations — will do the trick. The food. The music. The arts and crafts. Did I mention the food? Mostly what I miss is the sense of possibility at each. Also: the food. By Ian Froeb

A Southwest veggie burger with kale salad at Sweet Art

A vegan Roast Beef and Chedda sandwich at Utah Station

Jason Lamont, chef and co-owner of Love at First Bite in St. Ann, packages orders Sept. 24, 2020, in the restaurant's kitchen.