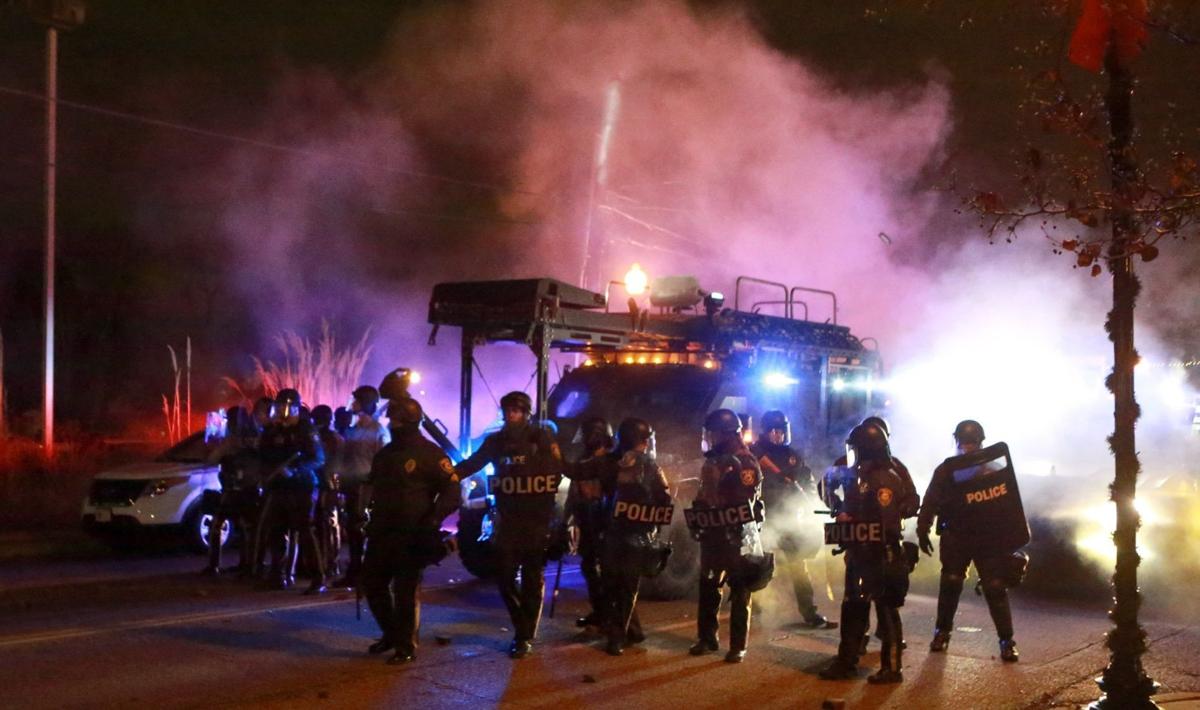 Police form a line after firing tear gas into protesters in Ferguson on Nov. 24, 2014. Photo by Christian Gooden, cgooden@post-dispatch.com 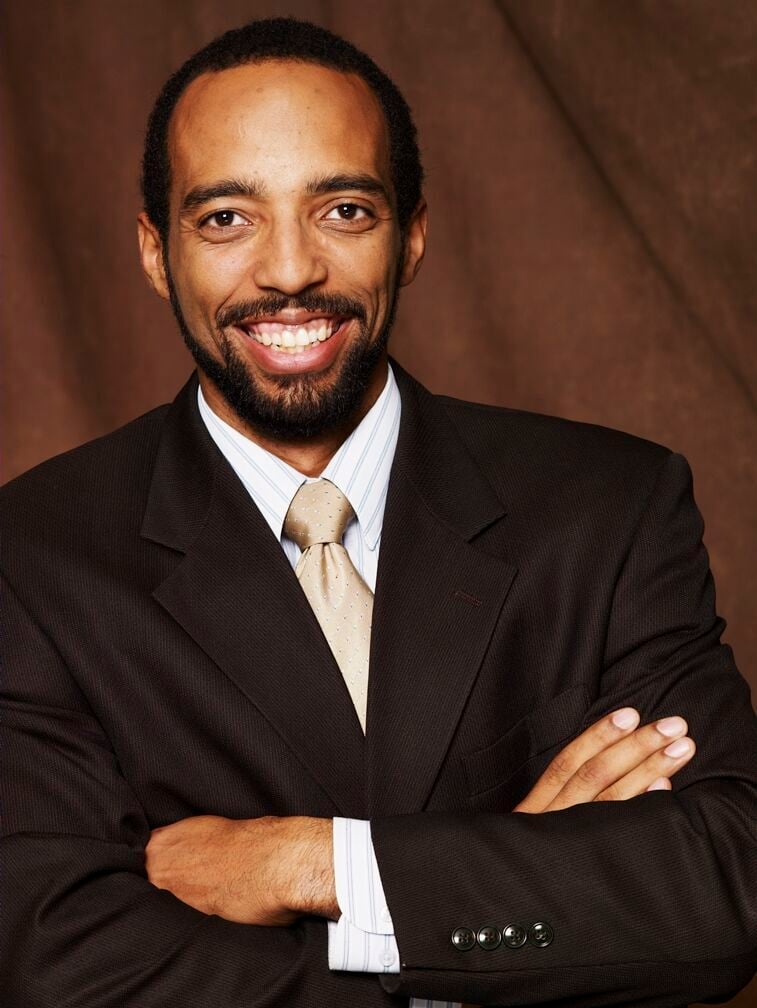 Once again, unsurprisingly, justice has proven elusive. The grand jury’s failure to indict police officer Darren Wilson for fatally shooting Michael Brown is the latest chapter in a tragic saga that began with the death of an unarmed, black teenager at the hands of a white police officer.

America’s past — not some rogue police officer, or racist bogeyman — bears the brunt of the blame for this current state of affairs. Nearly two-and-a-half centuries ago, this country was founded on ideals like equality, freedom and tolerance. Yet, racial bondage rooted in a pernicious presumption of inhumanity and inferiority was the order of the day in 1776. And while slavery is now a very distant memory, its residue — that wrongheaded presumption of inhumanity and inferiority — has cast a long and unyielding shadow that informs the attitudes and behaviors of all people, both consciously and subconsciously. Until we uproot and discard those foundational beliefs, we will remain prisoners of America’s past.

Time and again, that same presumption of inhumanity and inferiority has infected American policy. When people are not seen as human, but rather as “less than,” it becomes very easy to do all manner of things to them. That is what happened to those brutalized or killed by police. That is why, in America, we continue to assign benefits and burdens along the fault line of race.

These lessons are well known in Missouri. St. Louis is the birthplace of Dred Scott v. Sandford, a case in which the United States Supreme Court declared in 1857 that black people were “so far inferior that they had no rights which the white man was bound to respect.” Ferguson is not immune to the taint of bias. Racial isolation is commonplace in its political structure, educational institutions, employment opportunities, and housing, while stark racial disparities characterize policing.

Sadly, we are witnessing incidents of police violence against black people with increasing frequency these days. Akai Gurley was killed by police in the stairwell of his girlfriend’s public housing residence in Brooklyn. We saw Eric Garner choked to death by a New York City police officer. We witnessed Marlene Pinnock being pummeled by a California Highway Patrol officer. We saw Levar Jones shot by a South Carolina police officer during a traffic stop. And just two days after Michael Brown’s death, Ezell Ford, an unarmed black man, was killed by a Los Angeles police officer.

In many ways, the violence that has come to define the relationship between law enforcement and people of color — and black people in particular — reveals a larger truth about America.

Of course, we have made significant strides in the battle against the belief that race, inhumanity and inferiority are inextricably linked. A Civil War, several constitutional amendments, and a socio-political mass movement for civil and human rights have led to massive changes in the social fabric. Yet, an unarmed, 18-year-old black youth can still be gunned down in the street by the police, seemingly without any repercussions. Merely existing can prove fatal. And therein lies the problem.

Fortunately, we are not without potential solutions. On a national level, transparency, accountability, leadership and training must be employed to address the scourge of police violence. That’s why Legal Defense and Educational Fund Inc. has urged the United States Department of Justice to prosecute officers who commit crimes and departments who support them, account for police killings and use of excessive force, condition police funding on improved training, and encourage the use of body-worn cameras. In Ferguson, a coalition of community groups and advocates have sought a range of reforms to policing, including civilian oversight and mandatory training of officers.

But any reform efforts must be coupled with a change of culture. That requires that we acknowledge the persistence of false and ugly connections between race and inhumanity, and grapple with them through conscious, collective effort. That means practicing empathy — putting ourselves in the shoes of those who do not look like us or come from our neighborhoods, or towns, or communities. It means making decisions — about policy, law, and governing structures — from the long-ignored perspective of the disfavored. It means working through truth and reconciliation to repair the wounds of our country’s past. It will not be easy. But given all that has happened before and after Michael Brown’s death, it must be done.

As a federal prosecutor, I know how hard it is to charge officers like Darren Wilson

Those who react with jubilation or despair to the grand jury’s decision misunderstand and/or mistrust the process. After viewing 70 hours of e…

It is shocking to see the small town of Ferguson ransacked and looted. Ferguson is a mom-pop municipality that did nothing to deserve the hars…

Police patrols should have two officers

It would seem to me that had there been two police officers in a patrol car in Ferguson, Michael Brown would be alive today. The use of deadly…

Program to promote understanding is a good example for all schools

When I read the front-page article "Breaking down barriers, talking about race" in Monday's paper, it made me proud to live in Maplewood. Raci…

Culture of violence in America

The poor black population is circling the drain, to borrow a phrase from a TV medical drama. Fifty percent of young black males in Ferguson be…

The unseemly build-up to the announcement of the grand jury's conclusion produced an expectation of ugliness.

I have been a longtime resident of Ferguson, 45 years, and I fear that what was done to my community Monday night could be the beginning of th…

Consequence of denying freedoms, opportunities to everyone

With the media focusing on the grand jury decision and the unlawful behaviors of a few citizens in Ferguson, I'm concerned that we are failing…

Regarding the commentary "Addressing the scourge of police violence" (Nov. 26):

We must transform local economy, education and land use planning.

It is time to understand the 'other' side

A tremendous opportunity awaits our community.

School districts should use suspension or expulsion only as a last resort.

Editorial: The grand jury says no. Now St. Louis must make the most of it.

The grand jury says no. Now St. Louis must make the most of it.

This is our challenge. We must find empathy. It starts one witness at a time. Share yours.

Police form a line after firing tear gas into protesters in Ferguson on Nov. 24, 2014. Photo by Christian Gooden, cgooden@post-dispatch.com