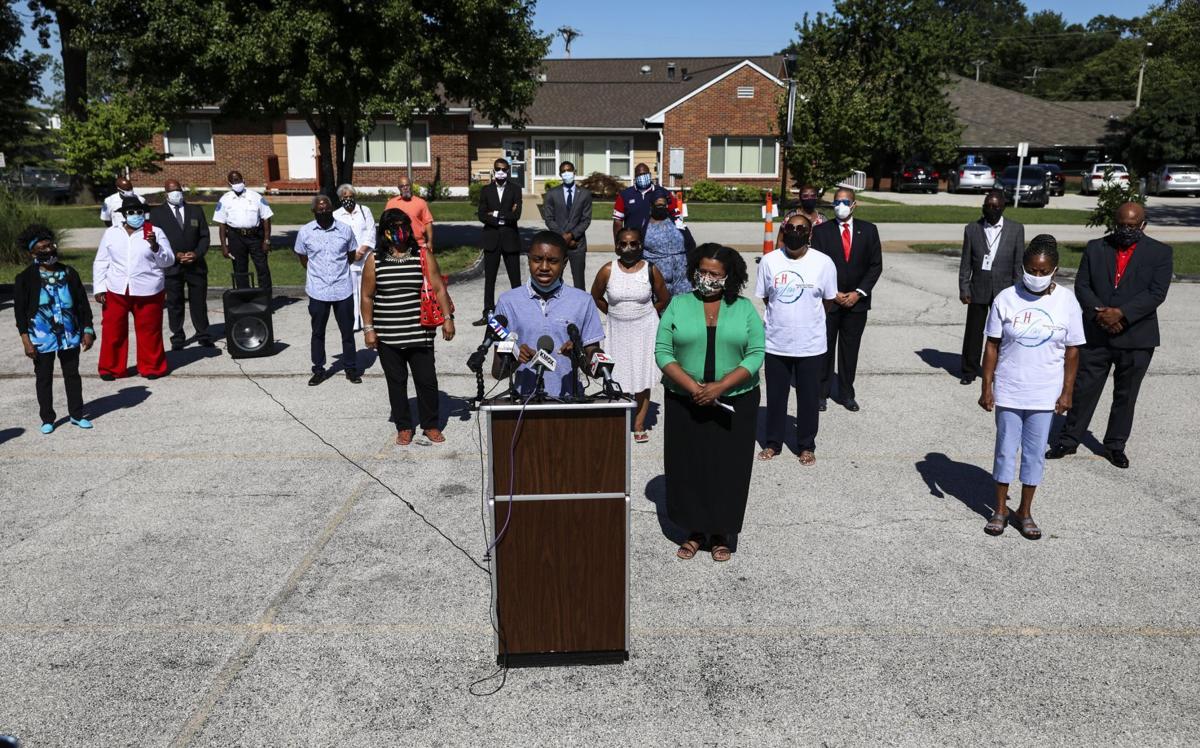 University City resident Marquis Govan, 17, speaks during a press conference to discuss Lt. Col. Troy Doyle's impact on the community at the Vinita Park City Hall on July 28. Doyle says he was passed over for the St. Louis County Police Chief position because of racial discrimination.

Just over a month into his first full term as St. Louis county executive, and Sam Page’s headaches are growing as scrutiny — and the number of lawsuits — grows over his hiring practices and how his administration uses public money to reward his political allies.

Last year, many observers thought County Police Lt. Col. Troy Doyle was a shoo-in to be the next police chief following the retirement of Chief Jon Belmar. But the Page-appointed police board majority surprised many when they selected Mary Barton instead, giving the county its first female police chief, instead of its first Black one.

Soon after, Doyle filed a complaint alleging discrimination, the first step before filing a potentially costly lawsuit against St. Louis County. The state commission charged with investigating such complaints has now concluded its proceedings and is allowing Doyle to move forward with taking his discrimination claim to the courts.

I obtained a Jan. 22 letter in which Alisa Warren, executive director of the Missouri Commission on Human Rights, wrote: “This letter indicates your right to bring a civil action within 90 days of this notice against the respondent(s) named in the complaint.”

That lawsuit may be filed as soon as next week. Buckle up, county residents, because another big discrimination tab could be coming your way soon.

The county settled another discrimination lawsuit last year for $10.25 million. That suit was brought by then-police Sgt. Keith Wildhaber, who alleged he was discriminated against for being gay. Wildhaber stayed with the department, was promoted to lieutenant, and was placed in charge of the department’s Diversity and Inclusion Unit. We’ll come back to him in a minute.

Doyle’s attorney, Jerry Dobson, told KSDK (Channel 5) back in July that one of the reasons his client was passed over for the job was because of “push back from the St. Louis Police Foundation about him being chief because of his race and Sam Page also told Doyle he was having difficulty getting donations from large corporate donors.”

Page’s willingness to allow his corporate friends to influence police operations was also a reason Dr. L.J. Punch, one of the police board’s Black members, cited for why the doctor resigned from the board in October. Punch also cited the lax efforts to combat institutional racism within the department. In fact, Barton, the woman selected to lead the department instead of Doyle, said she didn’t think such racism even existed.

“To say there’s systemic racism in the police department is overly broad and probably not accurate,” she told the County Council in June. “People not thinking before they speak is a far cry from racism.”

Barton’s theory was soon put to the test. Last month, a police dispatcher was definitely not thinking when he referred to a Black officer live over the air using language I’m not allowed to write in this column. Let’s just say he used the “F-word” followed immediately by the “N-word.” But it only gets worse from there. Turned out that the dispatcher was Barton’s own brother-in-law. Her initial statement did not mention her relation to the dispatcher and since then we only know that he has “left the department,” not whether he was fired or punished in any other way. This brings us back to Wildhaber.

In his new role as director of diversity and inclusion, Wildhaber was quick to condemn that dispatcher’s use of a racial slur over the police radio. “This type of language is disgusting and has no place in our department or in society,” Wildhaber wrote in a statement sent to media. “Immediate and decisive action must be taken by department leadership. We cannot continue to deny there is systemic racism and discrimination in our department. It’s time to dismantle it.”

Wildhaber was reportedly summoned to HR and “verbally admonished for speaking out against the racial slur to the media,” according to the police union. Barton also ordered him not to make any more statements to the media. Wildhaber, now a millionaire who can probably afford to tell the chief to kiss his A-word, instead requested a transfer out of the Diversity and Inclusion Unit. I mean, what’s the point if you can’t even speak out against employees calling other employees N-words?

Then it was reported that Barton was inexplicably given a $13,000 raise in December. Why? No one is saying. But Barton in her first year on the job is now making more than her predecessor, Belmar, made after six years as chief. My own requests to representatives for Page and the police board for an explanation about Barton’s sudden increase in pay have been unsuccessful.

Page is now also facing criticism for giving an $89,000 health department job responsible for coordinating COVID-19 vaccine outreach to a former councilwoman who probably illegally cast a critical vote for council chair days after her term had expired.

Whew. If all that seems like a lot, it was. It’s been a busy few months for the county executive. But details that may emerge from Doyle’s discrimination lawsuit along with an active County Council majority eager to investigate allegations of improper hiring, contracting and uses of funds, may mean even more headaches ahead for Sam Page and St. Louis County.

Lt. Col. Troy Doyle was one of eight candidates, and the only Black candidate, who applied to replace Chief Jon Belmar when he retired last spring.

University City resident Marquis Govan, 17, speaks during a press conference to discuss Lt. Col. Troy Doyle's impact on the community at the Vinita Park City Hall on July 28. Doyle says he was passed over for the St. Louis County Police Chief position because of racial discrimination. 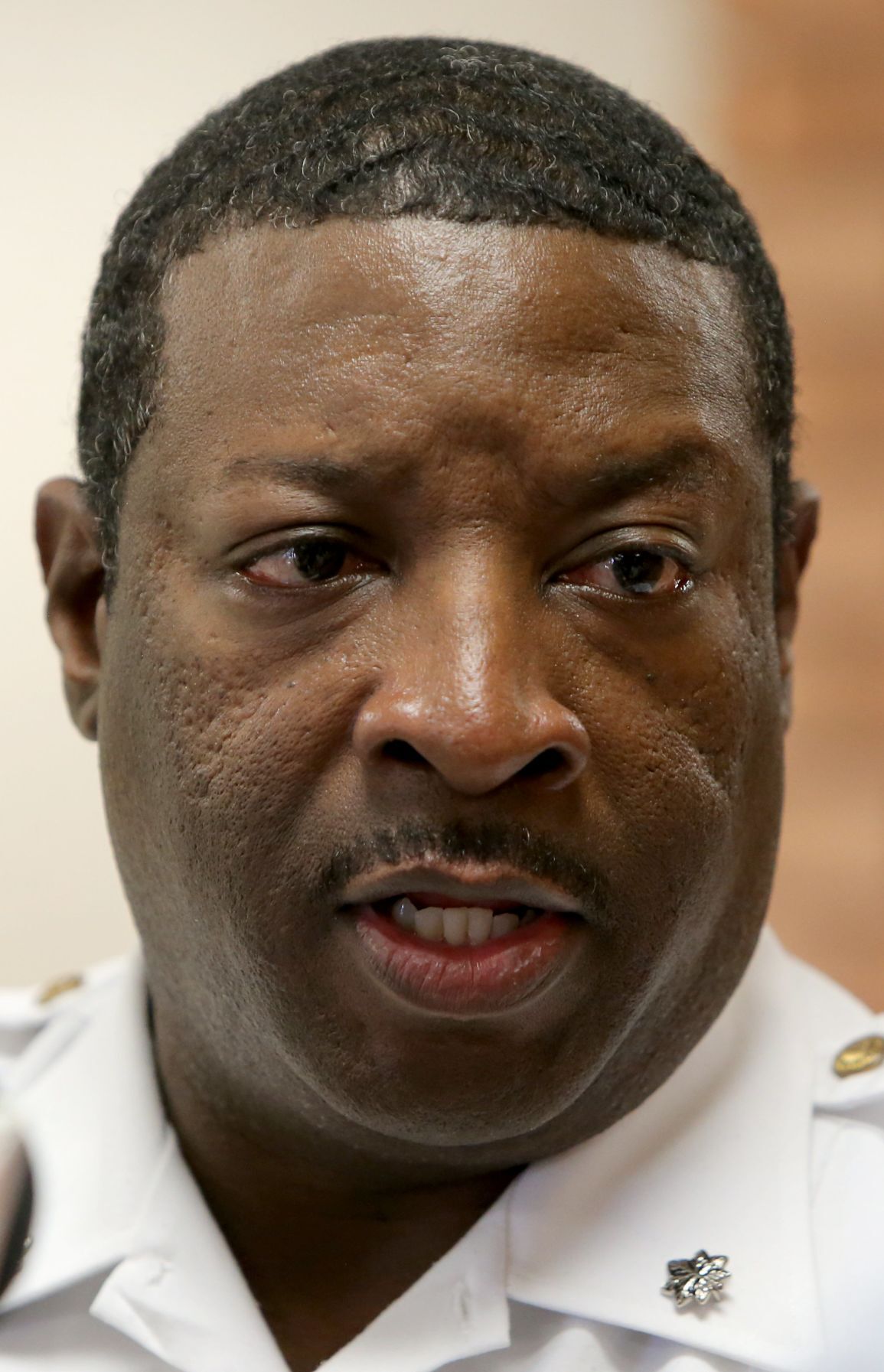