French: City should strive for zero population growth to stem the ongoing exodus
0 comments
Share this
{{featured_button_text}}
1 of 2 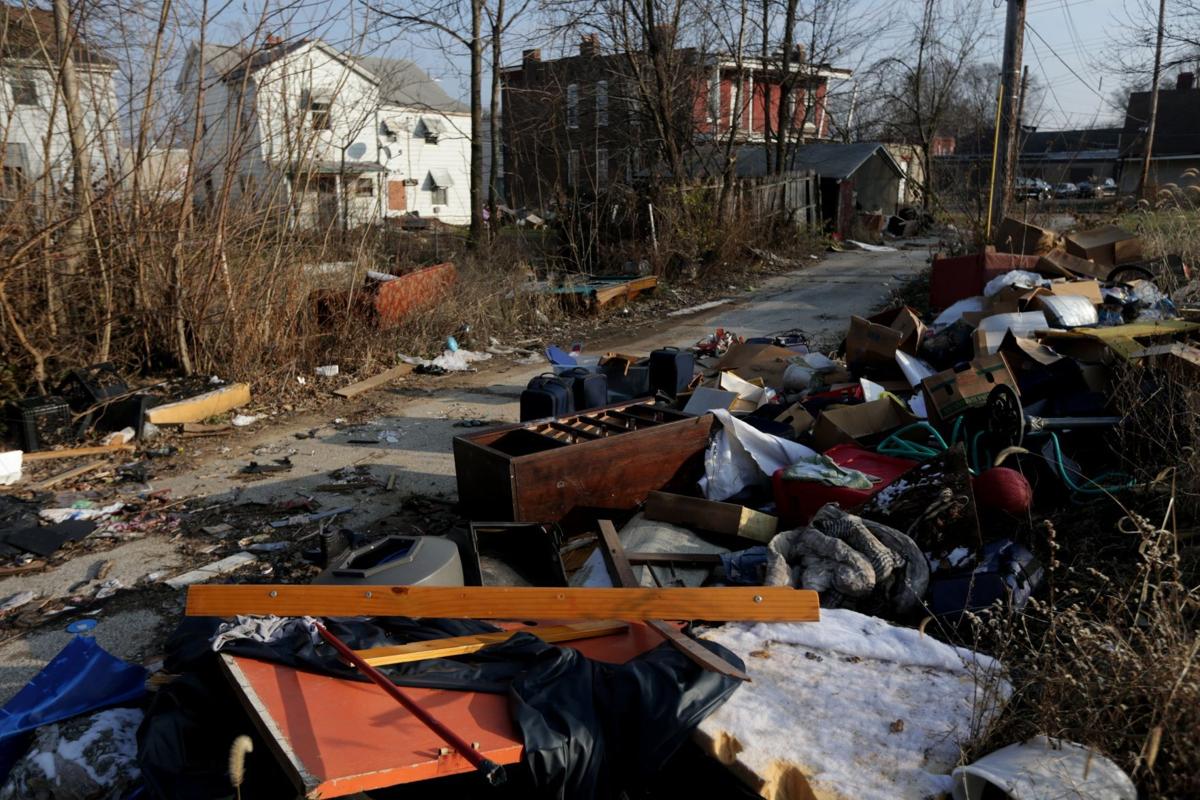 Furniture, trash, clothing and tires are strewn in an alley behind vacant and residential housing along the 7900 block of Frederick Street on Dec. 17.

New population estimates suggest St. Louis has experienced another decade of rapid decline. What will it take to make this a city that more people are moving to than moving from?

The final numbers from the 2020 U.S. Census won’t be released until later this year. Those numbers are important because they’re used for everything from allocating federal dollars, to corporate decisions about where to invest and move workers, to the controversial redrawing of local ward maps that will cut the city’s number of aldermen in half. They’re also one of the best gauges of whether neighborhoods, cities and states are desirable places to live and whether the policies of those governments have been effective. Based on early estimates, between 2010 and 2020, St. Louis failed by both measures.

As of July 1, 2019, the year before the start of the official census count, the city’s population fell to just 300,576, according to estimates from the U.S. Census Bureau. That was already a drop of nearly 6% from the 2010 official count of 319,294 and the lowest population since before the “Great Divorce,” when the city split from St. Louis County in 1876.

But some are predicting the official 2020 Census numbers will be even lower, surely below 300,000 and possibly closer to 290,000. If that’s true, it reflects the results of the failed policies of a city that long ago lost sight of what it takes to nurture growth and meet the needs of its people and businesses.

The decline to just 136,167 Black city residents represents a loss of almost 14% since 2010. That’s a staggering number whose real-world effect can be seen in the large number of vacant homes and properties in the city’s predominantly Black neighborhoods.

The strategy during the administration of former Mayor Francis Slay, who led the city from 2001 until 2017, was to focus on development in downtown and the central corridor. Hundreds of millions in tax credits and abatements spurred billions of dollars in investment and new projects in neighborhoods like downtown, the Central West End and Cortex. Those areas also saw significant population increases. But those gains couldn’t keep up with losses in the neighborhoods to the north and south.

Violent crime, low-performing schools, scarcity of good jobs and plunging property values made those places less and less desirable. During the Slay years, the city lost around 40,000 more residents. Mayor Lyda Krewson’s administration largely continued the same failed strategy with the city likely losing 10,000 or more residents during her four years in office.

So what can the new mayor, Tishaura Jones, and her administration do to turn the city around? Try focusing on the needs of those who are still here and learning why so many St. Louisans choose to leave.

Zero population growth should be the immediate goal for St. Louis. As strange as it sounds, a year with zero growth would represent the city’s best performance in over 70 years since it lost 106,000 residents between 1950 and 1960. Keeping the people we have should be the top priority. A place that is unable to meet the needs of its current residents surely won’t be able to attract and retain new population.

Why do people and businesses leave St. Louis? There are many theories. I have my own, some of which I’ve already shared. Violent crime being at the top of the list. But the new mayor and her administration should seriously consider the equivalent of an exit poll. Survey former St. Louisans, the recently relocated, to find out what prompted their exodus. Like a customer service survey: Rate your St. Louis experience. How could we have served you better?

You can bet that those will be the same reasons cited by the next group of St. Louisans who leave this year and next. St. Louis County should do the same, while the county is still early in its decline.

Population numbers are the best indicator of a region’s success. When it comes to quality of life, people vote with their feet. But people who voted to leave are easy to ignore by politicians elected only by those who remain. If those elected officials, and the cities and counties they represent, are going to be successful, they should listen to the data and change accordingly.

French: Verdict in Chauvin case was a drip of hydration in a desert of injustice

Antonio French: Black and blue and the pursuit of American justice

The eyes of the nation are on Minnesota this week following the fatal shooting of Daunte Wright by Officer Kim Potter.

French: Verdict in Chauvin case was a drip of hydration in a desert of injustice

The entire system, in Minneapolis and beyond, has been too tolerant of bad cops. In doing so, too many have become complicit.

Furniture, trash, clothing and tires are strewn in an alley behind vacant and residential housing along the 7900 block of Frederick Street on Dec. 17.