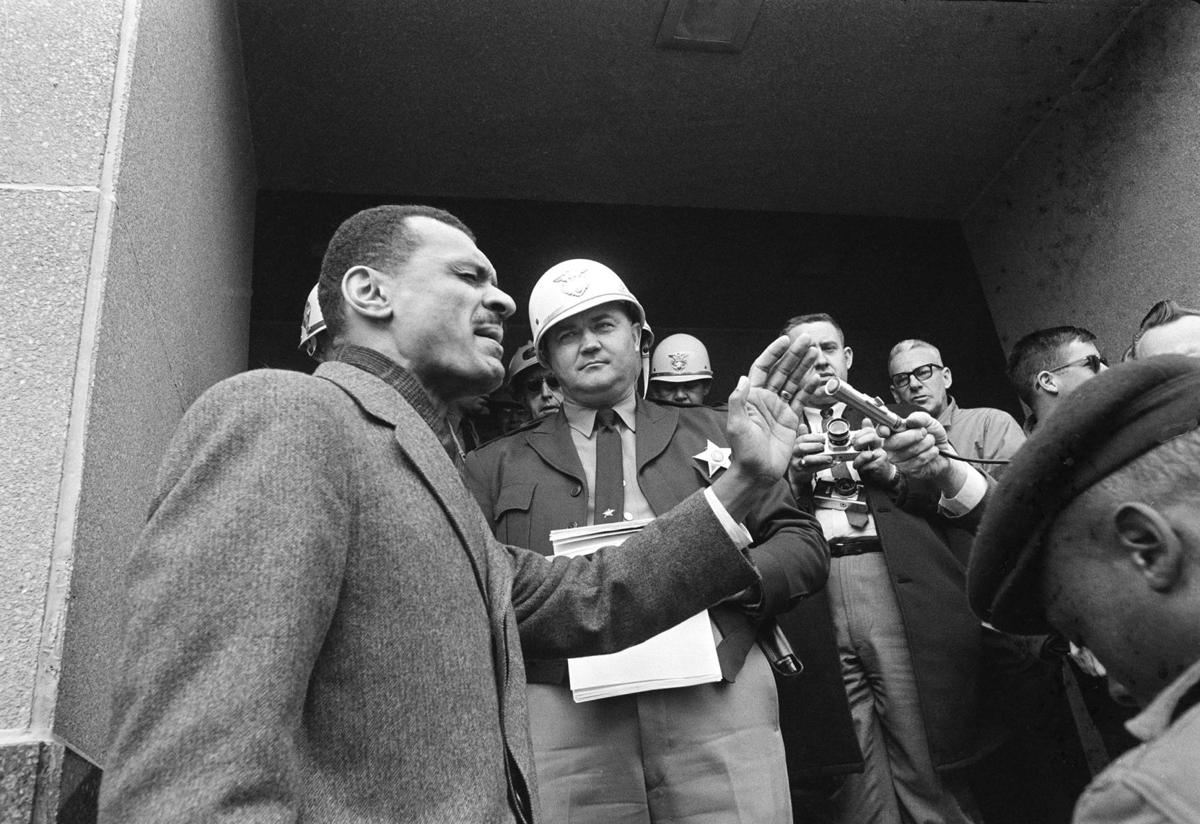 C.T. Vivian, left, leads a prayer on the courthouse steps in Selma, Ala. on Feb. 5, 1965, after Sheriff James Clark, background with helmet, stopped him at the door with a court order. Vivian led hundreds of demonstrators armed with petitions asking longer voter registration hours. Clark arrested them when they refused to disperse. 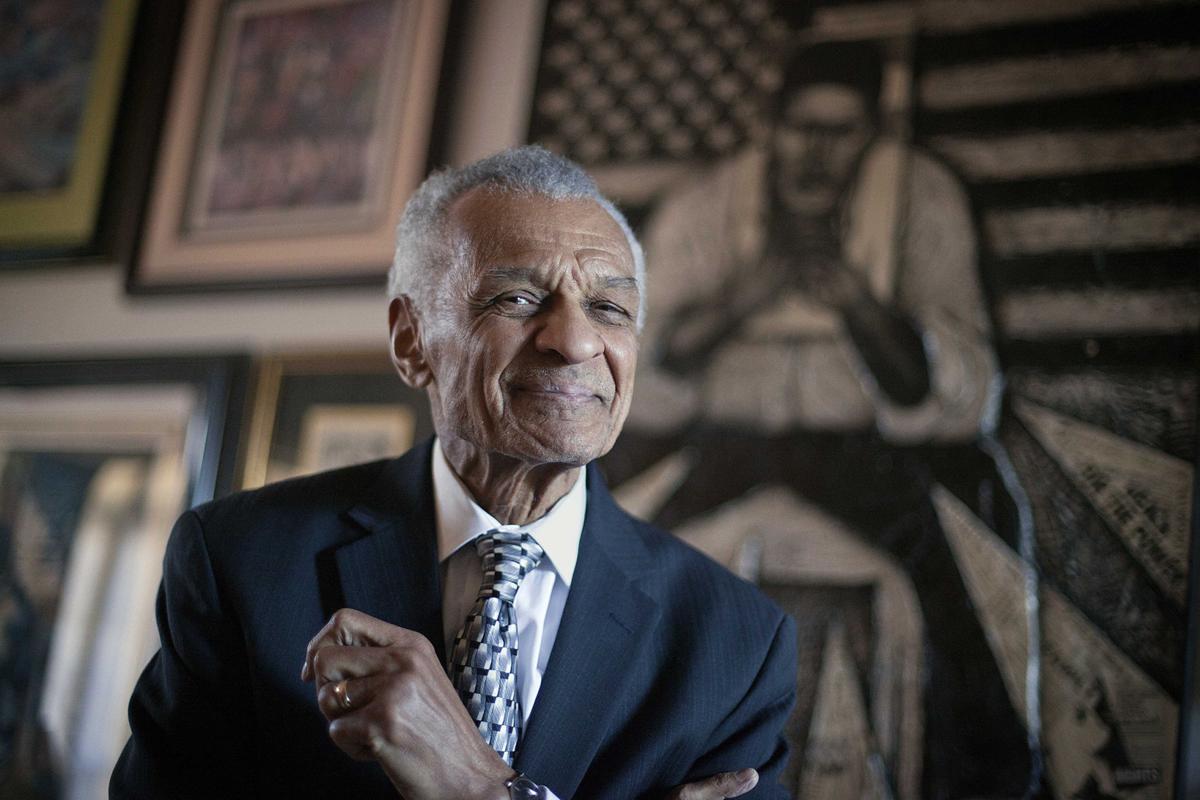 In the days after radio talk show host Rush Limbaugh died, efforts to honor him in new ways in Missouri quickly grew. However, months after the passing of another famous native son, civil rights icon C.T. Vivian, the honors remain absent. With this disparity, we bring dishonor upon ourselves.

A Baptist minister born in Boonville on July 30, 1924, Vivian died last July after a lifetime as one of the most significant leaders of the civil rights movement. Martin Luther King Jr. called him “the greatest preacher ever to live,” and civil rights leader and diplomat Andrew Young said that without Vivian’s courageous work in Selma, Alabama, “we would not have had the Voting Rights Act.”

A key leader in the Nashville sit-in movement in 1960, he also participated in the Freedom Rides and served in leadership at the Student Nonviolent Coordinating Committee along with King. His forceful but nonviolent preaching resulted in Sheriff Jim Clark punching him on video in Selma, which inspired the march across the Edmund Pettus Bridge the next month. John Lewis, who worked with Vivian back in Nashville and passed away on the same day last summer after a distinguished U.S. House career, nearly died in the beating during that march. Soon thereafter, the 1965 Voting Rights Act passed.

In 2013, Vivian received the Presidential Medal of Freedom. His death last summer sparked prominent headlines across the country. And he became the first non-elected Black man to lie in state at the Georgia Capitol.

Simply put, Vivian was one of the most significant figures born in Missouri in the 20th century. Yet, the state seems not to care.

Consider the divergence in treatment between Limbaugh and Vivian:

• In 2012, a bust of Limbaugh was added to the Hall of Famous Missourians in the state Capitol, complete with an unveiling ceremony with Limbaugh in the House Chamber. However, Missourians will not find the face of Vivian among the four dozen individuals with ties to the state who are honored for their accomplishments in politics, entertainment, literature and more.

• Shortly after Limbaugh’s death, Missouri Gov. Mike Parson offered his respects to “Missouri’s native son.” Parson also noted that he spoke with Limbaugh’s family and offered his prayers for them. The passing of Vivian sparked no acknowledgement from Parson.

• The Missouri Division of Tourism advertises a “Rush Limbaugh Hometown Tour” one can follow to drive around and see key locations in his early life. Neither the state nor Boonville notes Vivian or places associated with his early life.

• Two days after Limbaugh’s death, Republican state Rep. Hardy Billington of Poplar Bluff filed a resolution to declare each Jan. 12 “Rush Limbaugh Day” to honor “the famous Missourian and groundbreaking radio host.” Five other Republicans quickly signed on as co-sponsors. Seven months after Vivian’s death, no such resolution honors him.

As a Baptist minister who spent countless hours as a teenager listening to Limbaugh, I find this disparity disgraceful. While Limbaugh used his position to enrich himself and attack the marginalized, Vivian sacrificially placed his own body in harm’s way time after time to bring about a more just and equitable nation. Limbaugh harmed our national community by preaching hatred, mocking the suffering of others and injecting more lewdness, misogyny, racism and conspiratorial tendencies into the political bloodstream. Where Vivian attempted to heal our nation’s wounds, Limbaugh sought to tear them open. And Limbaugh even worked to undo the work of Vivian, Lewis and King on voting rights.

Vivian’s accomplishments surpassed Limbaugh’s. And Vivian’s life actually left our state and nation better than it was at his birth. That is a person we should want to emulate in the Show-Me State.

Although Vivian and his mother moved to Illinois when he was six after their Boonville home burned and the family had already lost its farmland at the start of the Great Depression, we can proudly claim him as one of our own. His paternal grandfather served as principal for an early Black school in Howard County, and his paternal grandparents and father are buried in Washington Park Cemetery in St. Louis.

A descendent of people enslaved in this state, Vivian helped break the chains that still kept many in this land from full citizenship. Yet, we fail to honor or even remember him. As the Jesus who inspired Vivian once noted just before a mob violently rushed at him like Sheriff Clark did at Vivian, “No prophet is accepted in his hometown.” Nor apparently in his home state.

When we pour accolades on Limbaugh but ignore Vivian, we dishonor ourselves. I do not think the humble Vivian would mind that we do not honor him, but he would express concern that the disparity of our honors suggests we remain unwilling to side with justice and equality. As he told Clark just before being punched, “You can turn your back on me, but you cannot turn your back on the idea of justice.” It is time for Missouri to stop turning its back on Vivian and justice.

Brian Kaylor is editor of Word & Way and author of four books on religion and politics.

McDermott: Yes, Michael Vick did his time, but why must society reward a convicted sadist?

In this era of prominent people behaving badly and seeing no societal (as opposed to legal) consequences, Vick’s story is instructive.

Kunapareddy: I’ve lived in Missouri most of my life, but I can't become an American citizen

There are 200,000 young people like me whose parents have documented immigration status, yet we are stuck in visa limbo.

Absence of vocal outrage by the Gym Centre and its patrons doesn't equal endorsement of a city blight designation.

There's a wrong assumption that anyone who challenges his own party is a traitor. When the party is wrong, it has to be called out.

Why would they do this?

People assume way too much about folks on the other side. That's dangerous for democracy.

Williams: Locally, nationally and globally, inequity imperils us all

Michael Paul Williams — a columnist with the Richmond Times-Dispatch — won the 2021 Pulitzer Prize in Commentary "for penetrating and historically insightful columns that guided Richmond, a former capital of the Confederacy, through the painful and complicated process of dismantling the city's monuments to white supremacy."

Wesley Bell: Kevin Strickland, the rule of law, and the arc of justice.

A new law enabled the state to consider evidence not available in Kevin Strickland's 1979 trial. Now he is exonerated.

Hutt: Flynn's city upon a hill

Flynn's version of America as an exclusively Christian nation bears no resemblance to the Founders' vision.

C.T. Vivian, left, leads a prayer on the courthouse steps in Selma, Ala. on Feb. 5, 1965, after Sheriff James Clark, background with helmet, stopped him at the door with a court order. Vivian led hundreds of demonstrators armed with petitions asking longer voter registration hours. Clark arrested them when they refused to disperse.