Lynn Schmidt: After the inauguration, new hope for peaceful Wednesdays
0 comments
Share this
{{featured_button_text}}
1 of 2 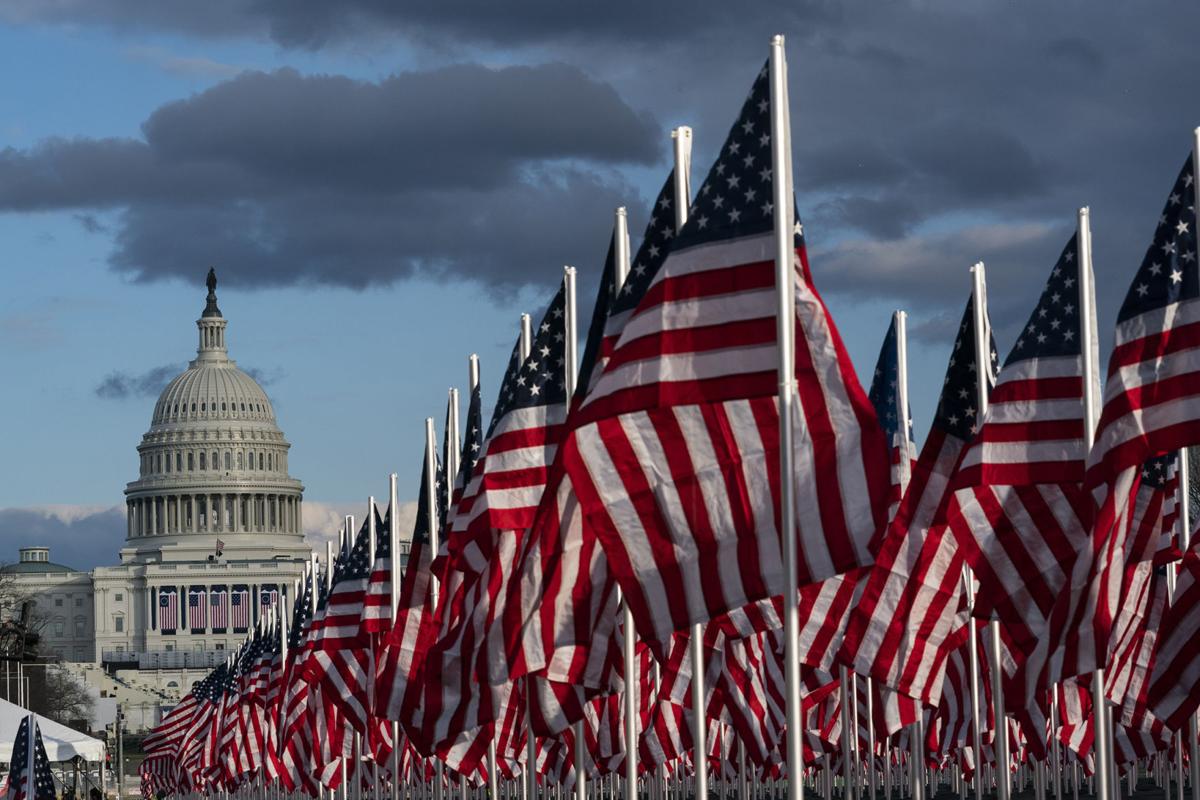 A "Field of Flags" was planted on the National Mall to represent the thousands of Americans who would normally attend the inauguration.

Like the Ides of March, beware the Wednesdays of January. On Wednesday, Jan. 6, our nation’s Capitol was attacked by insurrectionists attempting to overturn a free and fair election. On Wednesday, Jan. 13, Donald Trump became the first president in our history to be impeached twice, after a bipartisan vote in the U.S. House of Representatives. And then on Wednesday, Jan. 20, Joseph Robinette Biden was sworn in as the 46th president of the United States.

Biden announced that the day of his inauguration was “democracy’s day.” Indeed it was. Seeing three out of the five living former presidents, including one from my Republican Party, gathering together filled me with a sense of hope that a return to normalcy was at hand. I appreciated Vice President Mike Pence attending the peaceful transfer of power. I basked in the glow of norms and traditions. I shed a tear of joy for our democracy as Biden took the oath and addressed the nation.

But Biden’s inaugural was anything but normal. Missing were the million-plus spectators, not to mention the 400,000 Americans killed by the coronavirus. Also missing was Trump. There were National Guard troops. Attendees were correctly masked and socially distanced. And there was the unidentified man whose awkward job it was to wipe down the podium with a sanitizing wipe between speakers.

Our own Sen. Roy Blunt deserves commendation along with Sen. Amy Klobuchar, D-Minn., for their work as co-chairs of the Senate Inaugural Committee. Blunt’s message of working together to form a more perfect union in a determined democracy was a welcomed prelude to Biden’s inaugural address.

The inaugural address was exactly what Americans needed to hear. He outlined the major challenges that our country is facing, all of which we are all too achingly familiar with. Then he encouraged all Americans to do their part in forming that more perfect union we all want to see.

The biggest challenge to our country right now is obviously the pandemic. Biden acknowledged that “we’re entering what may be the toughest and deadliest period of the virus. We must set aside politics and finally face this pandemic as one nation, one nation.” His first act as president was asking Americans to join him in a moment of silent prayer to remember the 400,000 fellow Americans we lost to the pandemic. As a registered nurse, mother and wife of a medical professional, I am happy to set aside any partisan differences and join him — not only in prayer but in the fight to combat this virus as one nation.

Biden called out the Big Lie and all of the little lies. The Big Lie of election fraud was in large part the reason we had the events of those first two Wednesdays. The Big Lie was also in large part why much of Washington was encased inside the “Capital Green Zone” being guarded by more than 25,000 National Guard troops. The president called on all of us, and especially elected leaders who took an oath to the Constitution, to defend the truth and defeat the lies. He also promised to level with us. Wow, that will be refreshing.

Biden called for unity. For anyone who listened closely (or reread it, as I did), you will see that the president not only acknowledged those forces that divide us but also gave us the roadmap to achieve that unity. No matter which tribe you see yourself in, or no tribe at all, we should all be able to behave in the manners he outlined: “We should see each other not as adversaries but as neighbors. Treat each other with dignity and respect. Lower the temperature. Listen to one another. Show tolerance and humility.”

Unity does not mean we cannot disagree. I can almost guarantee that I will disagree with many of the policies coming from the Biden administration. But I will not demonize “the other side.” I can agree that I am an American first.

There were close to 200,000 American flags on the National Mall. I thought about those flags, which represented the thousands of people who could not attend the inauguration because the mall was sealed off. I thought about those colors as Biden uttered the words, “We must end this uncivil war that pits red against blue, rural versus urban, conservative versus liberal.”

The American flag is composed of the colors red, white and blue. Perhaps the white stripes and stars can be those places where we can weave together the red and the blue and commit as Americans in our common identity. Perhaps the combination of those colors can be the example of our need to form a more perfect union.

I, for one, am looking forward to a future of calm and peaceful Wednesdays to come in our determined democracy.

Lynn Schmidt, a contributing Editorial Board member, is the Missouri state leader for Stand Up Republic and is a registered nurse. She lives in St. Charles. lynnschmidtrn@outlook.com

Hall: Education in the divided states of America

We are living in two Americas — but that is not a revelation for people of color in this country. The experiences and contributions of Black p…

Mondainé: While mom worked, a silent Black army led the family through adversity

A generation of Black children relied on armies of motherly angels — women who stepped up to help with the family when moms went off to work.

Leonard Pitts Jr.: Why can’t we have nice things?

Its Constitution fixed the value of African Americans at three-fifths that of other humans.

Connors: Refugees could be solution to declining population in St. Louis

The St. Louis region is stagnating, and much of the problem starts at the core — the city of St. Louis.

Does changing the names of Amherst, Wilson, Pershing and Jackson negate the fact that atrocities were done to Native Americans and enslaved Black people in the past? Hardly.

Richard Kyte: We can learn a lot from working with our hands

Opinion: If there is one thing you learn from working in the world of things — whether it is farming, manufacturing or construction — it is that intentions are very different from results.

A "Field of Flags" was planted on the National Mall to represent the thousands of Americans who would normally attend the inauguration.