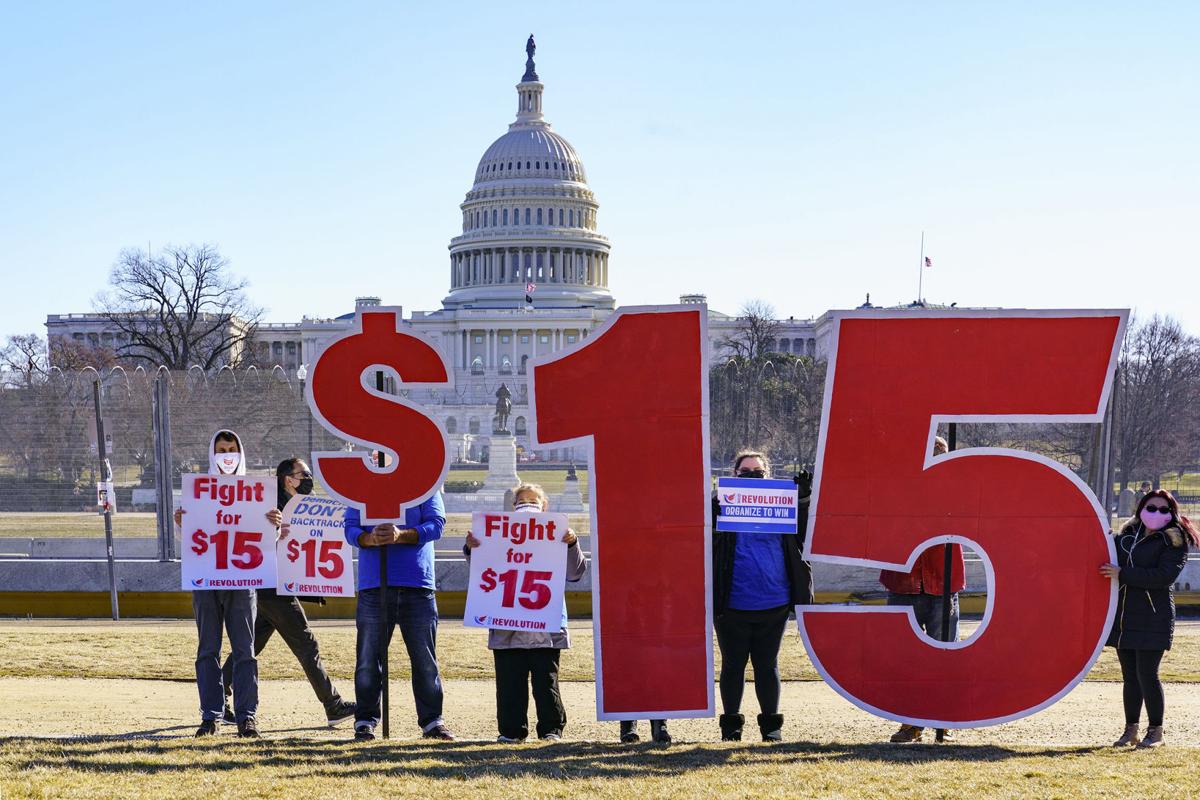 Activists appeal for a $15 minimum wage near the Capitol in Washington on Feb. 25.

Just last week, I was having a conversation with my teenager about unintended consequences. Before your mind wanders too far off the rails, we were talking about the proposed $15 federal minimum wage — while in the drive-thru line at a fast food restaurant, which seems remarkably relevant.

My teenager remarked that she thought the $15 minimum wage sounded like a great idea. “Why wouldn’t we want workers to make more money?” she asked. I then went on to burst her minimum wage bubble.

If passed by Congress and signed by President Joe Biden, the Democrats’ Raise the Wage Act would raise the minimum wage, in annual increments, to $15 per hour by June 2025. After that, it would be increased at the same rate as median hourly wages. Last Thursday, the Senate parliamentarian ruled against allowing the minimum wage increase to be included in the $1.9 trillion pandemic relief bill. If a minimum wage bill is going to happen, it will need to pass on its own — an exceedingly unlikely prospect given the current partisan split on Capitol Hill. Nevertheless, it’s worth considering the outcome if it did pass.

There are unintended consequences with raising the minimum wage. Research shows businesses would respond to the increased costs by reducing employment, particularly for those low-skilled workers the bill is trying to help. Some businesses may pass the higher costs on to consumers. The increase in costs can actually reduce real wages and decrease living standards. These costs actually hurt those the policy would be attempting to help. Despite the hope of the proponents of an increased minimum wage, the minimum wage does little, if anything, to decrease poverty.

In its recent analysis of the Raise the Wage Act, the nonpartisan Congressional Budget Office estimated it would reduce employment by 1.4 million jobs. For those who manage to keep their minimum wage job, the negative effects could include a decrease in hours, a decrease in benefits and worse working conditions.

Americans need to ask themselves: Is it worth reducing employment opportunities for the least-skilled, least-experienced and most-vulnerable workers in the economy to boost their incomes? Are there other ways to raise the wage floor?

There are a couple other plans being put forward. Two Republican senators, Tom Cotton of Arkansas and Mitt Romney of Utah, proposed raising the wage floor to $10 per hour. Missouri Sen. Josh Hawley is proposing a three-year program that would increase worker wages in 2021 and would be paid by taxpayers rather than employers. Hawley’s plan would support a $15 minimum wage for workers of large corporations that generate at least $1 billion in annual revenue. Employers such as Amazon, Target and Best Buy already have raised their minimum wage to $15 per hour. Hawley’s plan is very complicated, and his team estimates the plan would cost $200 billion.

It is also worth noting that the poverty rate was at an all-time low just before the pandemic. According to the Census Bureau, the share of Americans living in poverty fell to 10.5% in 2019, which is down 1.3 percentage points from 2018. The poverty rate was the lowest published since estimates were first published in 1959. Then the pandemic set in, wrecking everything.

Conservatives believe in the dignity of work and that hard work should be rewarded. To quote my favorite economist, who also happens to be my husband, “Existence of a middle class cannot be mandated.” Opportunities for better paying jobs through training programs should be encouraged. So should creative solutions to fight poverty.

Our elected officials need to find a balance between workers being able to make a living wage and doing as little harm as possible to the larger economy. I am encouraged that there is more than one plan out there. Who knows? There could actually end up being a compromise.

Lynn Schmidt: Republican leaders have forgotten what 'of the people, by the people' means

The party of Lincoln does not seem to want to follow the very words of the president who its members emulate.

Activists appeal for a $15 minimum wage near the Capitol in Washington on Feb. 25.