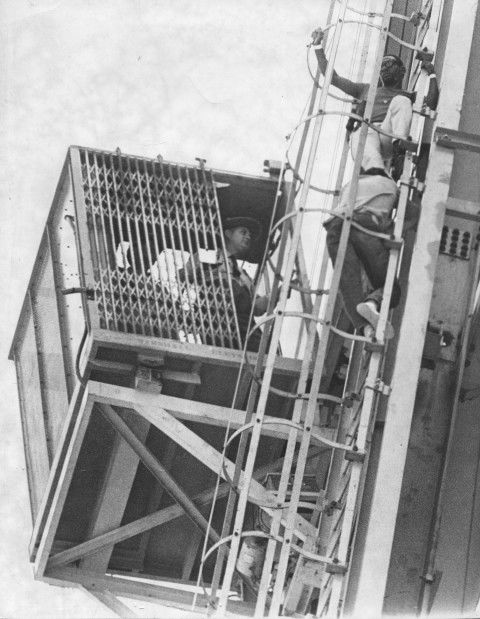 LeRoy R. Brown, assistant manager of the Jefferson National Expansion Memorial (in elevator), tries to persuade Percy Green and Richard Daly to climb down from the north leg of the unfinished Gateway Arch on July 14, 1964. Green and Daly, members of the St. Louis Committee of Racial Equality, climbed the work ladder to call for more jobs for blacks at the riverfront worksite. They told Brown they were staying, but climbed down after about four hours. Photo by Robert LaRouche of the Post-Dispatch 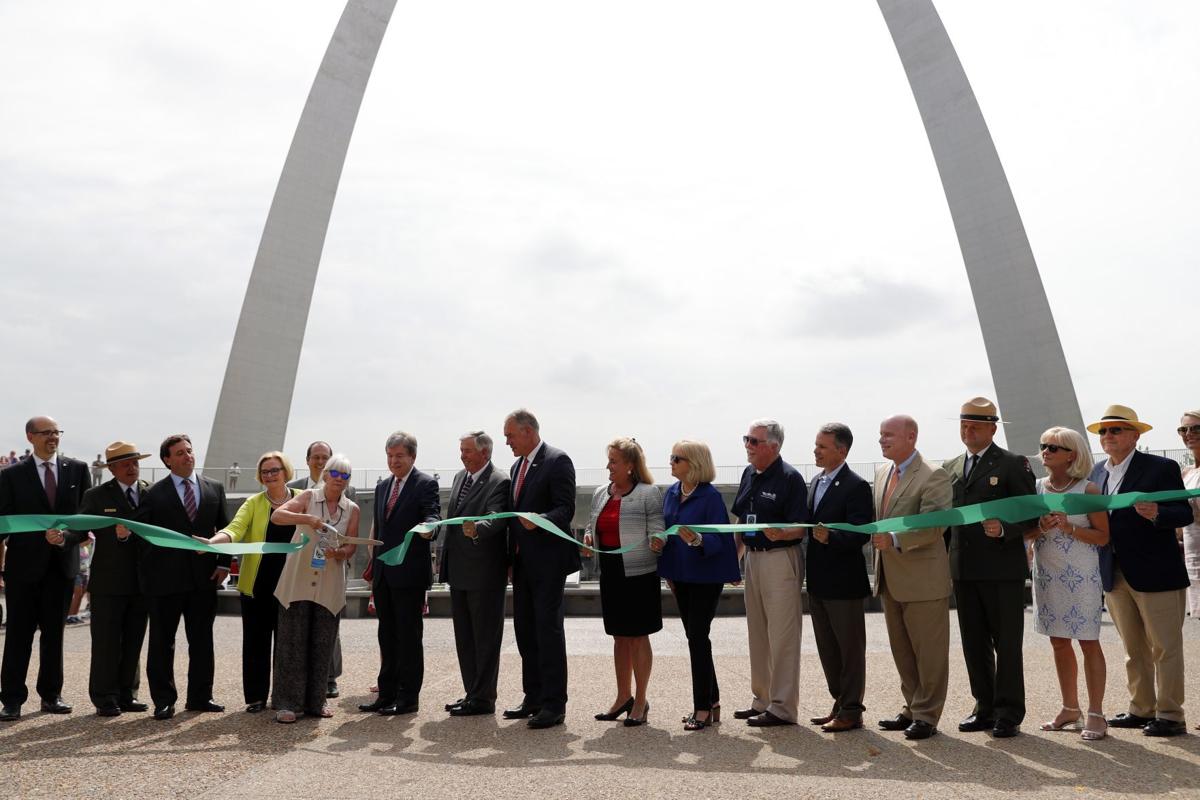 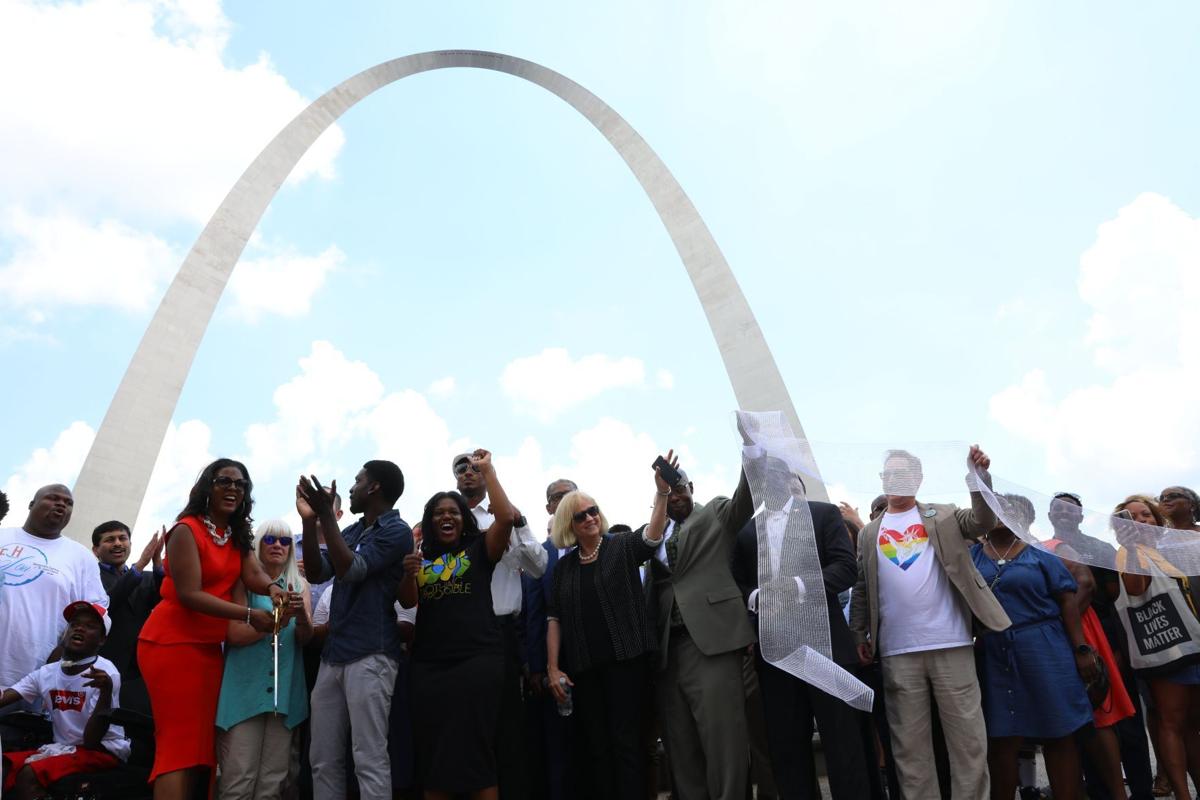 By Walter Johnson and Jamala Rogers

History happens twice they say: once tragedy, then again as farce. Never more so than under the Arch. In July 1964, Percy Green II climbed the Arch to protest the all-white work crews building it. In July this year, an all-white ribbon-cutting ceremony suggested that the lesson of Green’s protest continues to elude many.

Whether one views the all-white opening as a misstep or as a symptom of a deeper malignancy, there should be no excuse for forgetting black St. Louis while memorializing the city’s past. Some reminders are in order.

The African-American history of St. Louis goes well beyond Dred Scott. Too often it has been buried by the city’s efforts to reconstruct itself as a tourist-friendly destination city.

Not far from the site of the Arch, in the antebellum period, sat the city’s largest slave pen, owned by the notorious trader Bernard Lynch. Thousands of enslaved men, women and children passed through its gates on their way “down the river.”

Among them was William Wells Brown, the first African-American novelist. Of the slave market in St. Louis, Brown wrote, “I shall never forget a scene which took place in the city. A man and his wife were brought for sale. The man was first put up, and sold to the highest bidder. The wife was next ordered to ascend the platform. She slowly obeyed the order. The auctioneer commenced, and soon several hundred dollars were bid. Her cheeks were wet with tears.”

The remnants of Lynch’s slave pen today lie beneath Ballpark Village. No marker memorializes those who were sold there.

Several blocks to the north and a bit to the west lies the site of what was arguably the first lynching in U.S. history. On April 28, 1836, Francis McIntosh, a free black man, was walking along the levee when he was accosted and taken into custody by a pair of policemen. There was a struggle, and one of the officers was killed. McIntosh briefly escaped before being taken into custody and placed in a cell. A group of white men soon broke McIntosh out, and dragged him up Chestnut Street. They tied him to a tree, built a fire beneath his feet, and burned him to death.

Though the members of the mob were well-known to many observers, no one was ever indicted for the murder.

The lynching of McIntosh occasioned Abraham Lincoln’s famous 1838 “Lyceum Address,” which remains one of the most pointed and eloquent defenses of the rule of law in American history. Worse than the fact that McIntosh had been arrested without cause, for Lincoln, was the fact that he had been put to death by a mob without a trial. “This mobocratic spirit,” he wrote, would cause best Americans to lose faith in their government. “Whenever the vicious portion of the population shall be permitted to gather in bands of hundreds ... and hang and burn obnoxious persons at pleasure and with impunity, depend on it: this government cannot last.”

For Lincoln the key to preserving political liberty was historical memory. As the Revolutionary generation died, he argued, the values they had fought for were in danger of being forgotten. To replenish the nation’s commitment to the rule of law, Lincoln argued, required daily remembrance: “Let reverence for the laws, be breathed by every American mother, to the lisping babe, that prattles on her lap — let it be taught in schools, in seminaries, and in colleges; let it be written in Primers, spelling books, and in Almanacs.” Reminders everywhere.

On the corner of Seventh and Chestnut, where Francis McIntosh suffered and died, there sits today a Hooters.

Recent history — the uprising in Ferguson, the protests that followed the acquittal of Jason Stockley — has presumably made many whites wary of reopening the city’s troubled racial past. But remembrance of the city’s long history of struggle and violence should be a central element of its urban fabric. There are plenty of obvious places to begin: with Percy Green II at the base of the Arch; with the un-numbered martyrs at the corner of Broadway and Clark, and with Francis McIntosh at the corner of Chestnut and Seventh.

Walter Johnson is a professor of history at Harvard University.  Jamala Rogers represents the Organization for Black Struggle.

The Occupational Safety and Health Administration was empowered long ago by Congress to enforce vaccination policies.

Schmidt: More poison definitely is not the cure for a party drunk on Trump Kool-Aid

Despite all indications that good political health could be just around the corner, the GOP patients insist on poisoning themselves.

What do you do when a president is crazy? That’s essentially the question Gen. Mark Milley faced in the twilight days of the Trump administration.

Ashby: The Cherokee Indian is gone, along with reminder of a rich and diverse history

Social justice activists are scoring victories by eliminating symbols of a bygone, racially insensitive era. What do we lose in the process?

Kids today complain about how hard it is, with all the stresses of the pandemic and social media bullying. Does that match the '50s and '60s?

Furtado and Green: Police reform should start with revamping 911

The 911 system lacks responsiveness, and dispatchers report feeling undervalued and overworked. It's time for a change.

Nurses are leaving the profession, and replacing them won’t be easy

Mensah: A great way to appreciate America's freedoms is to live in a lawless vacuum

The U.S. Constitution and the rule of law are gifts worth cherishing, especially when compared with nations where no such protections exist.

Alegria and Rhodes: The word is abortion. Say it. Talk about it. Protect access to it.

More than ever, we must fight for what is rightly ours: the ability to control our bodies, care for our communities and plan our futures.

Leonard Pitts Jr.: You can starve an ideal only so long before you kill it altogether

Those pictures are traumatizing.

LeRoy R. Brown, assistant manager of the Jefferson National Expansion Memorial (in elevator), tries to persuade Percy Green and Richard Daly to climb down from the north leg of the unfinished Gateway Arch on July 14, 1964. Green and Daly, members of the St. Louis Committee of Racial Equality, climbed the work ladder to call for more jobs for blacks at the riverfront worksite. They told Brown they were staying, but climbed down after about four hours. Photo by Robert LaRouche of the Post-Dispatch