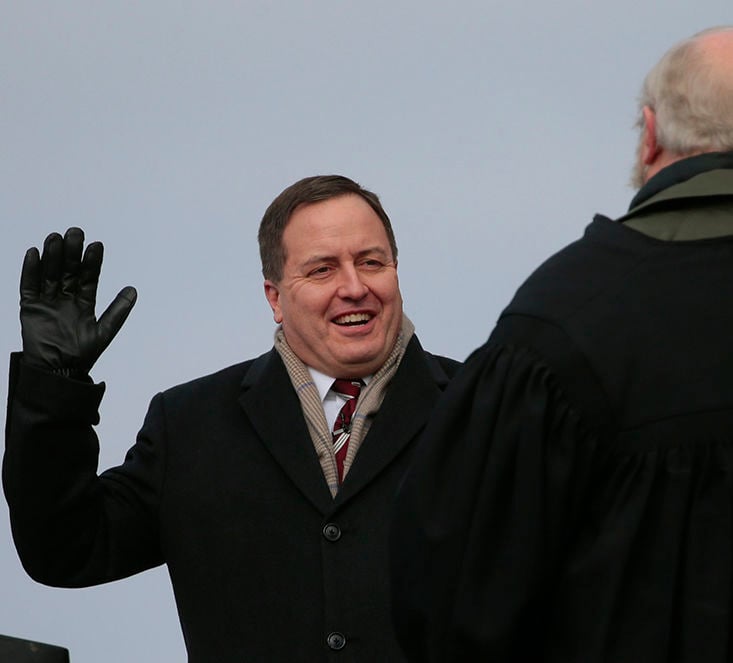 Secretary of State Jay Ashcroft is sworn in at the Missouri Capitol in Jefferson City on Jan. 11. 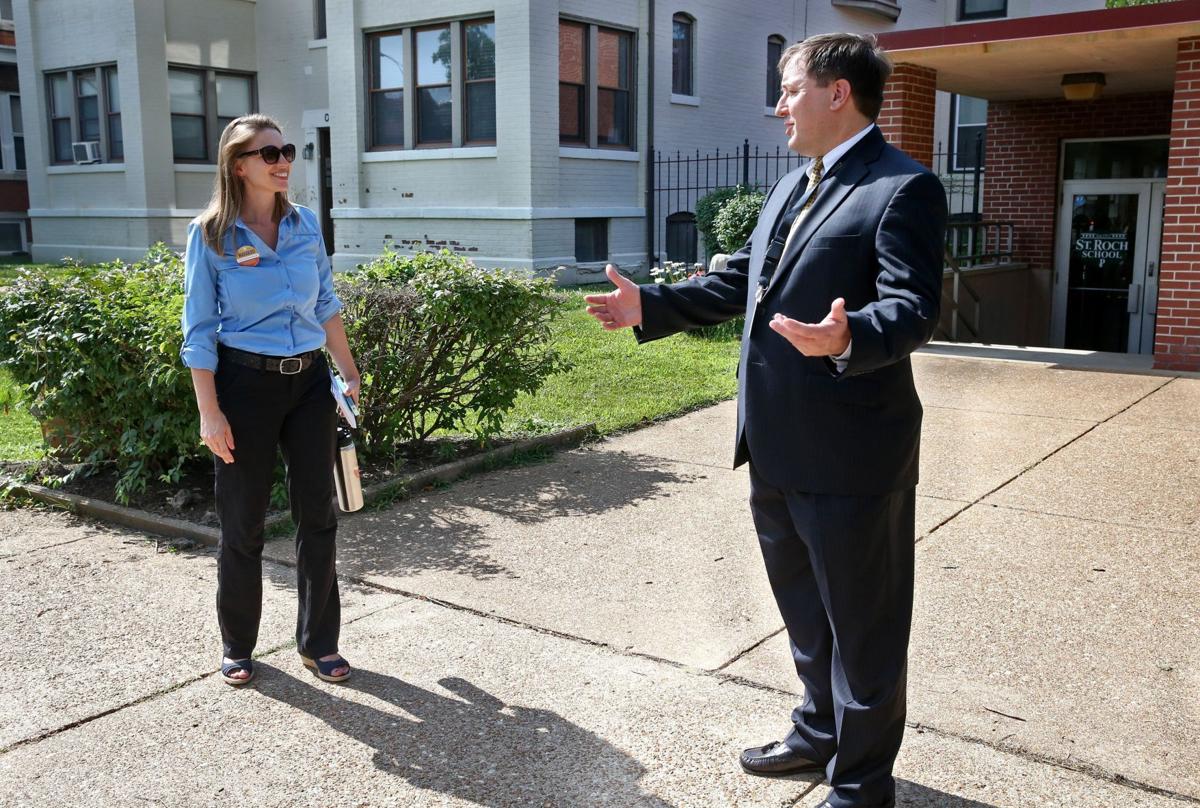 Missouri Sec. of State Jay Ashcroft (right) talks with aldermanic special election candidate Heather Navarro on July 11, 2017. This was the first election since a 2016 voter ID law was passed by Missouri.

If Missouri’s voting system ain’t broke, why are Missouri Secretary of State Jay Ashcroft and the Legislature trying to fix it? Ashcroft — the chief overseer of state election integrity — gave a speech in January proudly announcing that Missouri had conducted four “safe, secure elections” in 2020. In other words, despite all uncertainties of mail-in voting and other pandemic accommodations, Missouri carried off its elections without a hitch. Fraud-free.

Ashcroft nevertheless has supported measures like one currently before the Legislature to require a photo ID to vote. Because, apparently, “safe and secure” isn’t safe and secure enough — especially when the free exercise of voting rights might enable certain voters, such as minorities and the elderly, to vote for non-Republicans.

GOP lawmakers who back the current photo identification measure, House Bill 334, say it’s needed to prevent in-person voter fraud, a problem that Ashcroft has minimized as a threat. The bill’s sponsor, Republican Rep. John Simmons, of Washington, Missouri, said voter fraud would “cancel out” legal votes. “Showing a photo ID to vote will help my constituents and your constituents ensure their vote is not disenfranchised.” The House agreed, voting 109 to 46 last Wednesday to advance his bill to the GOP-led Senate.

According to the conservative Heritage Foundation’s election fraud database, the last documented cases of voter fraud in Missouri occurred in 2017. That year, there were a whopping three cases statewide — all of which were connected to people who had prior felony criminal convictions and were ineligible to vote.

There’s not a shred of evidence to indicate that anyone anywhere was disenfranchised that year or any other year because photo ID checks were absent at the polls. “I feel really good about the security we have at the state level,” Ashcroft told lawmakers in February.

If HB 334 becomes law, it would require Missouri voters to present a photo identification to election officials at the polls or to obtain an absentee ballot. Voters who do not have a photo ID would have to complete a provisional ballot, which is where the real disenfranchisement kicks in.

The Missouri Supreme Court last year struck down a 2016 voter ID law as unconstitutional. But Republicans in the Legislature are pushing the measure again in a cynical move clearly designed to undermine voter confidence in election integrity and advance the myth proffered by former President Donald Trump that vote fraud is a real threat to American democracy.

Voter ID requirements disproportionately disadvantage Black and Latino voters, the elderly, and the disabled. These laws also reduce participation and discourage the inclusion of more voters in the democratic process. If the goal of Republican lawmakers is to restore public confidence in elections, the first step is stopping the propagation of the big lie that there was widespread voter fraud to begin with.

Editorial: A bad cop was finally convicted after a long history of violence and abuse.

All's not well that ends well when it comes to the conviction of a bad cop who had no business being a cop in the first place.

Editorial: Too much ado about Ellie Kemper, not enough about Veiled Prophet's legacy

Every town has its strange, outdated traditions. Thanks to social media, many people recently learned about one of St. Louis’. And one St. Lou…

The sooner the courts step in and drag Jefferson City out of the Stone Age on healthcare, the better.

Editorial: Intrusion on press freedoms marks a new low, even for Trump

In an unprecedented move, the Trump administration seizes reporters' email records but gagged lawyers from telling their clients about it.

Editorial: Washington protest report is anything but an exoneration of Trump for photo-op

Trump, hardly a religious man, had absolutely no need, other than his own political promotion, to stand in front of St. John’s Church that day.

Conservatives of conscience should recognize the campaign against Fauci as the dangerous anti-science screed that it is and reject it.

Editorial: Compassion and conservativism don't have to be mutually exclusive

Gov. Mike Parson should take a cue from his Texas counterparts and understand the injustice of an innocent person unjustly imprisoned.

Editorial: Senate report on Jan. 6 Capitol insurrection is appalling in its omissions

A bipartisan report on the Capitol attack contains glaring omissions about why it occurred and how President Trump encouraged it.

In Guatemala, Vice President Kamala Harris told migrants bluntly: Do not come. Her message was sternly worded but necessary.

Editorial: Pulitzer board recognizes the teen whose video changed America.

Though horrified at what she was seeing, the teen held her cellphone camera steadily for more than 10 minutes as the life ebbed from Floyd’s body.

Secretary of State Jay Ashcroft is sworn in at the Missouri Capitol in Jefferson City on Jan. 11.

Missouri Sec. of State Jay Ashcroft (right) talks with aldermanic special election candidate Heather Navarro on July 11, 2017. This was the first election since a 2016 voter ID law was passed by Missouri.