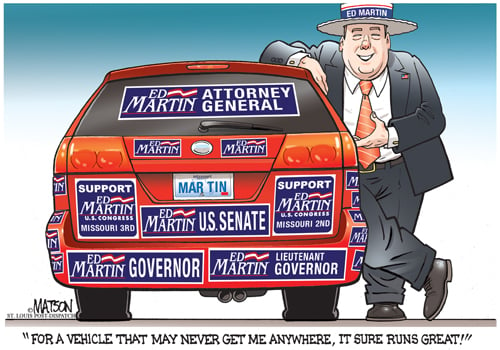 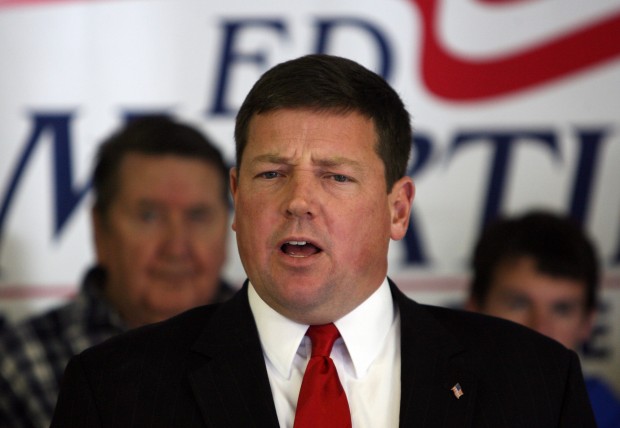 Ed Martin calls for an investigation into voting irregularities at a press conference on Nov. 3, 2010, following his losing effort to unseat U.S. Rep. Russ Carnahan, D-St. Louis, at the polls. Photo by J.B. Forbes jforbes@post-dispatch.com

Republican Ed Martin hasn't yet asked for our endorsement as he seeks the Republican nomination for Missouri attorney general, but, as he begins his reconnoitered campaign, we suggest an aggressive advertising strategy.

Mr. Martin, the besmirched ex-chief of staff of former Gov. Matt Blunt, should focus on his personal experience with the attorney general's office. He has a lot of it.

Who among potential candidates other than Mr. Martin can lay claim to being one of the principal subjects of a nearly $2 million taxpayer-funded investigation into whether he helped orchestrate multiple violations of the state's open meetings and records law, which the attorney general helps to enforce?

Only Ed Martin can.

Mr. Martin also has been unapologetic about his effort to use the full power of the Missouri governor's office to destroy the reputation of a young staff member who dared to raise questions about Sunshine Law violations.

So why not make that the centerpiece of his campaign?

Mr. Martin, for instance, could point to how adept he is at avoiding traps laid by other attorneys, like when he was deposed on Nov. 7, 2008, in the Sunshine Law investigation that was led by two ex-Missouri state patrolmen. Mr. Martin uttered numerous creative derivations of the phrase "I don't know." He can't recall. He can't remember. He doesn't know. He can't remember if he ever recalled.

This was, of course, after Mr. Martin freely admitted regularly destroying government emails and using his office to coordinate political attacks against then-Attorney General Jay Nixon.

Perhaps Mr. Martin's memory lapse during the deposition helps explain why the former head of the St. Louis County Board of Elections has announced for not one, not two, but three offices already this election cycle, and filing for those offices hasn't even begun. A favorite of some St. Louis-area Tea Partiers, Mr. Martin first set his sights on a U.S. Senate run, then he thought the U.S. House was more his cup of tea, and now he wants to be the state's top law enforcement official.

Again, he hasn't asked us, but our look at his record suggests that his campaign against another well-known political opportunist, incumbent Democrat Chris Koster, could play to Mr. Martin's strengths.

For instance, besides being an expert in skirting the Sunshine Law, Mr. Martin has experience developing legal strategies to enforce laws against undocumented workers.

During a Missouri Housing Development Commission meeting, he outlined his plan:

"... every friggin' developer can figure out who is illegal," Mr. Martin said. "There's a bunch of Mexicans out there, I guess some of them are probably not legal."

Again, we reiterate his need for effective advertising here.

We suspect Mr. Martin's response to our suggestions will be similar to what he told Scott Eckersley, the young man he fired after Mr. Eckersley suggested that the governor's office was improperly destroying emails. Mr. Martin told Mr. Eckersley he was being fired, in part, because Mr. Eckersley ignored a request to stop communicating with Mr. Martin, regardless of the topic.

"It doesn't matter if you get a revelation from God," Mr. Martin said then.

We haven't talked to God, Mr. Martin. We just think you will need some good friggin' advertising ideas.

Godspeed in your election, Mr. Martin. You'll need all the help you can get.

ST. LOUIS • Ed Martin has finally found a race that is just right.

Randy Jotte will join Ed Martin and Ann Wagner in the GOP race for the seat currently held by Todd Akin, who is running for Senate.

Ed Martin slides out of Senate race, into House fight

Ed Martin announced on Monday that he is leaving the Senate race, and will run for Congress, again, this time in a district where he doesn't currently live.

The St. Louis Hills Republican announced Monday that he will challenge Democratic U.S. Sen. Claire McCaskill in her bid for a second term.

Ed Martin calls for an investigation into voting irregularities at a press conference on Nov. 3, 2010, following his losing effort to unseat U.S. Rep. Russ Carnahan, D-St. Louis, at the polls. Photo by J.B. Forbes jforbes@post-dispatch.com