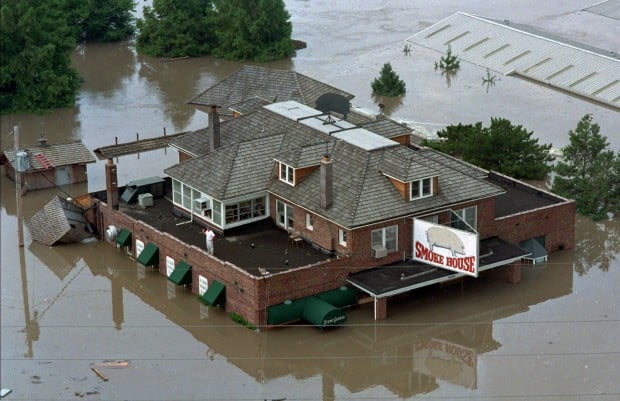 The Smoke House in Chesterfield Valley, Chesterfield, Mo., is surrounded by more than 10 feet of flood waters from the Missouri River Aug. 1, 1993. The popular resturant was one of many businesses in Chesterfield Valley that was flooded when the Monarch Levee gave way flooding the valley during the 1993 flood. (AP Photo/St. Louis Post-Dispatch, Larry Williams) 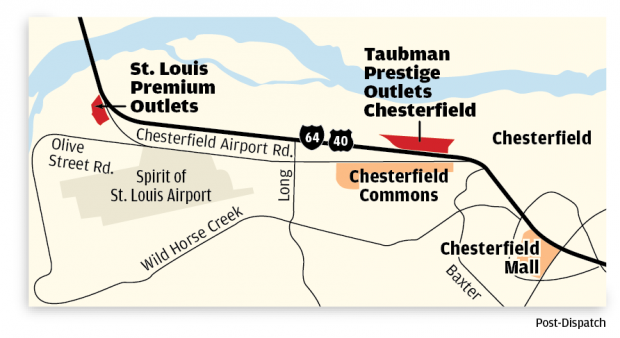 The expansive area of Missouri River bottomland on the far west side of Chesterfield was inundated when the Big Muddy punched a hole in the Monarch-Chesterfield Levee. The floodwater covered Highway 40 and runways at Spirit of St. Louis Airport. It caused the evacuation of 450 inmates at what was then the county’s Adult Corrections Center. Water stood eight feet high in some of the buildings in Gumbo’s small commercial district.

This was an epic flood, the sort that leads to a capital letter name: the Great Flood of ‘93. It’s the sort of flood that leads to calls for change and scientific reports examining things like “how did this happen?” And “how do we make sure it doesn’t happen again?”

In the case of the Great Flood of ‘93, the White House commissioned a report asking 30 of the nation’s top water experts to answer those two questions.

Twenty years later, the Galloway Report might as well be buried under a ton of dirty river silt.

Reading it today, and comparing its recommendations with what emerged in the Chesterfield Valley (alas, the name “Gumbo” was a flood victim, too), makes a compelling case that our city, state and federal leaders learned little in the two decades since the Great Flood.

“We said, if you don’t need to develop in a flood plain, don’t do it,” retired Brig. Gen. Gerald Galloway told the Post-Dispatch in 2005, when, more than a decade after the Great Flood, it was clear his report was being ignored.

He should see the Chesterfield Valley now.

Not one, but two outlet malls are being added to the more than 1.5 miles of nonstop strip-mall erected behind the rebuilt Monarch-Chesterfield Levee, in a gluttonous tribute to valuing profits over good sense.

Developers and government officials point to the more than $70 million that has been put into that levee. No doubt it’s an engineering marvel, built to withstand a so-called 500-year flood; that means the odds are 1 in 500 every year that the levee will be topped or breached.

“I am never concerned about another flood,” developer Michael Staenberg arrogantly told the West Newsmagazine this month for a story celebrating the Chesterfield Valley’s rebirth.

Here’s a better quote, one that is more informed, more accurate, and more illustrative of 20 years of ignorant development policies:

“There is no doubt in my mind that we will, some day, have a flood even higher than ’93,” David R. Busse, chief engineer for the Army Corps of Engineers in St. Louis, told the Post-Dispatch’s Tim O’Neil for a Sunday story examining the 20 years since the Great Flood.

When that flood comes — and Mr. Busse is right, it will — it will be much worse than what St. Louis experienced when sleepy Gumbo Flats led national telecasts. Multiple billions of dollars will go down the drain. Flooding downriver will come faster and higher than before. Think Katrina. Think Hurricane Sandy. Think about the fact that climate change has rendered meaningless the old formulas and the old maps for 500-year floods.

The developers, of course, will laugh all the way to the bank. In 1993, many landowners in Gumbo Flats waited until just 5 days before the flooding hit to buy insurance. They were covered. Now they’ve rebuilt on the taxpayers’ dime, and the changes proposed to flood insurance policies by the Galloway Report have been ignored. The valley will flood again. And all of us will pay.

The levee protecting their investments is bigger and badder, but it’s not as mighty as the Missouri. Even if the levee holds, it will merely push a wall of water elsewhere. Let it be somebody else’s problem.

Here’s what we’ve learned 20 years after the Great Flood of ‘93: Not one damned thing.

Editorial: A waterlogged nation fails to learn from its repeated floods

Until the south city homeowner with the flooded basement realizes that his predicament is connected to the new levee protecting two Chesterfield outlet malls, and the coal-ash landfill planned in the Missouri River floodplain, and his congressman's denial of man-made climate change, the nation is destined to continue to repeat the mistakes of the past 100 years.

The very last thing that should be built in the flood plain protected by the Howard Bend Levee are homes, be they luxury ones or multi-family. It's bad public policy of the sort that will eventually come back to haunt the St. Louis region.

How will "parents" respond to the Mississippi River's lousy report card?

Gary and Beth Machens talk about how the Flood of 1993 covered their farm in West Alton. After the water receded, they raised their home above…

Former St. Louis Post-Dispatch photographer Jerry Naunheim Jr. shares stories of what it was like to cover the Flood of 1993. Naunheim was one…

The Smoke House in Chesterfield Valley, Chesterfield, Mo., is surrounded by more than 10 feet of flood waters from the Missouri River Aug. 1, 1993. The popular resturant was one of many businesses in Chesterfield Valley that was flooded when the Monarch Levee gave way flooding the valley during the 1993 flood. (AP Photo/St. Louis Post-Dispatch, Larry Williams)