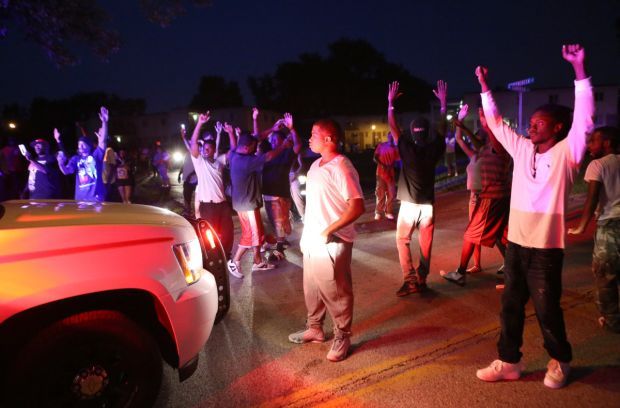 "Don't shoot us" cries out the crowd as they confront police officers arriving to break up a crowd on Canfield Dr. in Ferguson on Saturday, Aug. 9, 2014. Earlier in the day police had shot and killed an 18 year-old man on the street and the crowd of people were upset. Photo By David Carson, dcarson@post-dispatch.com 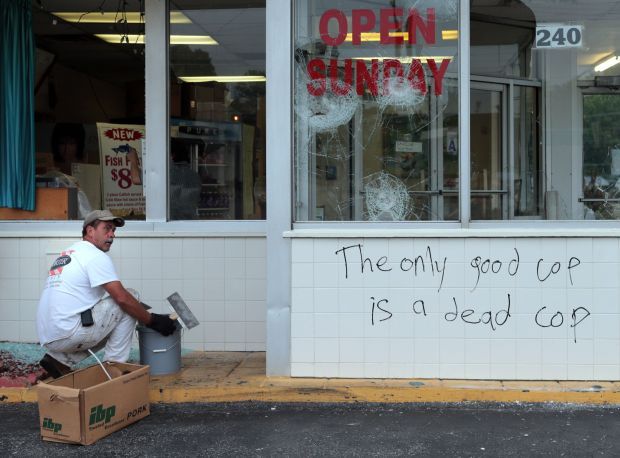 Scenes from the clean up on Monday, Aug. 11 2014, after a after violent night in Ferguson. Photo by Laurie Skrivan, lskrivan@post-dispatch.com

Michael Brown didn’t get due process.

The still unnamed police officer who shot the 18-year-old black teenager dead in Ferguson will get plenty of it.

This is the root of the frustration that is driving the African-American community to the streets in north St. Louis County over yet another senseless killing of a young black man.

“What do we want? Justice!” chanted a crowd of family, friends and community members who gathered after the Saturday shooting. “When do we want it? Now!”

They may get justice — in the form of a prosecution of the police officer who shot and killed the recent Normandy High School graduate — but the odds aren’t stacked in their favor, and even if it happens, it won’t happen anytime soon.

America’s history is riddled with officer-involved-shootings in which juries give police who perform a dangerous job the benefit of the doubt. Trying to learn from those shootings to prevent further ones is difficult, says criminologist David Klinger, one of the nation’s foremost experts on police shootings.

Mr. Klinger, a former police officer, practices his craft just down the street from Ferguson, at the University of Missouri-St. Louis, where he is an associate professor in the criminal justice department.

One of the findings in a 2012 study he did of shootings by police in the city of St. Louis could offer some interesting guidance to whomever ultimately investigates the shooting of Michael Brown. Mr. Klinger recommended that the shooting investigations be handled with more transparency, and that ultimately, findings be posted on the department’s website, with the names of officers clearly identified.

It’s no wonder, then, that leaders in Ferguson, including members of the NAACP, have called for the FBI to take over the lead in the investigation into how an unarmed 18-year-old was shot.

That’s a good suggestion, especially considering that the NAACP already has an ongoing federal complaint against the county police department over alleged racial profiling.

While answers are likely not to come in this case as quickly as some would like, appointing a federal agency to oversee the investigation will instill the sort of trust that might calm some of the justified anger over the shooting.

Here’s a second one: Efforts to elevate the importance of annual studies of racial profiling by police in the region and the state should be intensified.

Last year, for the 11th time in the 14 years that data has been collected, the disparity index that measures potential racial profiling by law enforcement in the state got worse. Black Missourians were 66 percent more likely in 2013 to be stopped by police, and blacks and Hispanics were both more likely to be searched, even though the likelihood of finding contraband was higher among whites.

Every year these numbers come out to little fanfare, in part because there isn’t enough political will to do the further study to break them down by precincts and individual officers to determine whether there is a cultural or training problem in entire departments or just a few rogue, racist cops who need to find another line of work.

Perhaps the tragic death of Michael Brown will spur a little political will.

While he wasn’t driving a car when he was pulled over and shot, the concept is the same: Nearly every black man in America has a story of being pulled over, stopped or harassed as a young person for doing something that a white teenager would never imagine might end in being on the wrong end of a police officer’s gun. Driving While Black. Walking While Black. Wearing a Hoodie While Black.

But those numbers plus a dead young man in the street make a strong case for deserving a closer look.

Sixty years after Brown vs. Board of Education said separate but equal wouldn't work for schools, St. Louis is still struggling with the concept.

The challenge for this community, for its cops and politicians and civic leaders, as well as residents of all races and all addresses, is how we adapt to life after Ferguson.

Editorial: Lessons from Ferguson: We earned this

With a little federal investment, with some introspection that allows us to both recognize and learn from our region's still strong racial divide, with an unwavering focus on educational equality that values young African-American students no differently than white ones, the final chapter of the Ferguson story can be a hopeful one.

This week, White America and Black America saw a white police officer shoot a fleeing black man in cold blood. But did we really see the same thing?

The Post-Dispatch editorials submitted for the Pulitzer Prize

"Don't shoot us" cries out the crowd as they confront police officers arriving to break up a crowd on Canfield Dr. in Ferguson on Saturday, Aug. 9, 2014. Earlier in the day police had shot and killed an 18 year-old man on the street and the crowd of people were upset. Photo By David Carson, dcarson@post-dispatch.com

Scenes from the clean up on Monday, Aug. 11 2014, after a after violent night in Ferguson. Photo by Laurie Skrivan, lskrivan@post-dispatch.com