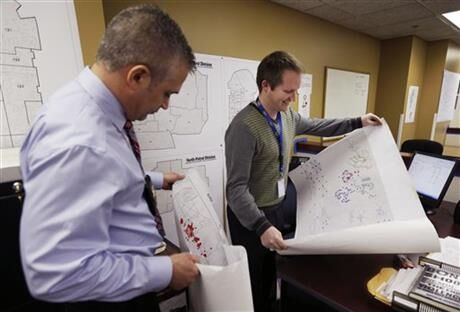 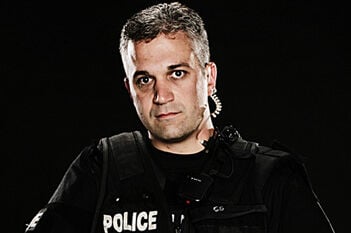 Then Sgt. Joe McHale of the Kansas City Police Department on the A&E Network's "SWAT" in 2007.

Joe McHale is a second-generation Kansas City cop who was a little skeptical of “focused deterrence” policing when he first heard about it.

As a younger man, he’d spent seven years as a TACT squad officer, even appearing on reality TV show about SWAT teams. The new concept sounded a little touchy-feely when the KCPD started talking about it in 2012.

The idea was to form a collaboration across city, state and federal law enforcement agencies to work with academic experts and social workers to identify and disrupt criminal networks. Those in the networks would be offered alternatives to crime. If they didn’t buy in, the hammer would be dropped on them.

“We can’t just use handcuffs any more,” Maj. McHale said. “We can’t arrest our way out of the crime problem. We’ve got to have other tools. NoVA is about the police department, prosecutors, the feds, academic experts, probation and parole. It’s about what we do, how we address crime.”

It could be that what appears to work on one of side of Missouri would work on the other.

In short, St. Louis has far more concentrated poverty, and the crime that often accompanies it, than Kansas City.

Last year the city of St. Louis saw a 32.5 percent spike in its homicide rate, to 159, the highest number since 2008. The city is collaborating with criminologists at the University of Missouri on crime patterns and policing issues. It has employed community policing and so-called “hot-spot” policing, flooding high-crime areas with officers at random intervals. That program was cut back because of the demands caused by Ferguson-related civil unrest.

Indeed, police officials have said the so-called “Ferguson effect” may be associated with higher crime levels since the police killing of 18-year-old Michael Brown last August. The spike in homicides is not believed to be Ferguson-related, but rather to ongoing disputes among certain criminal groups in four north St. Louis neighborhoods.

St. Louis also has a criminal justice system that historically has not meshed as well as it could. In 2011, Mayor Francis Slay asked a team of IBM management consultants to study how the system could be be improved. Data are now shared better among various parts of the system, but the first major initiative — a special docket for defendants accused of gun crimes — fell afoul of turf-conscious judges on the St. Louis Circuit Court bench.

“On homicide rates, Kansas City and St. Louis had sort of been on a par with each other for years,” Maj. McHale recalled. “We went back and forth on beating each other. We’d been doing same things for decades.”

Two years ago, Darryl Forté, the city’s new police chief (and the first African-American chief) reorganized the police department to cut down on jurisdictional disputes, creating a Violent Crime Enforcement Division. He bought into the NoVA project in a big way and assigned then-Capt. McHale as the department’s liaison. To cut down other turf disputes, the NoVA team moved into the office of Jackson County Prosecutor Jean Peters Baker.

“We didn’t have good intelligence,” Maj. McHale said. “We weren’t talking to prosecutors or probation and parole. We were working with a 1980s system. We had to restructure.”

Working with experts from the University of Missouri-Kansas City, NoVA began employing social network analysis to identify groups associated with crime. They picked the brains of street cops and detectives and probation and parole officers. They traced crime the way epidemiologists trace outbreaks of disease.

“Now we know that there are 55 or 60 groups with a total of 900 people causing the majority of our problems,” Maj. McHale said. “Instead of policing 322 square miles, we’re policing the network.”

“We’re putting everything out there,” Maj. McHale said. “We tell them, ‘We know who you are and we know who your friends are. But we’ve also got a social services program. Whatever you need to get you off the path of violence, we’ll help you do it.’

“We tell them that the murder rate in their groups is 100 times the national average. You have a better chance of living through a deployment to Afghanistan or Iraq.

“But we also tell them that if they screw up, we’re coming after them and all their friends, no matter how big or how small the crime. They begin to influence each other. Crime is like a hot stove. You start to learn not to touch it.”

Maj. McHale said focused deterrence policing is no more expensive than what was done previously. There’s a $400,000 a year budget for social service workers and the services they deliver. At times it’s been as simple as buying an alarm clock, or an anger management class or helping someone get a GED.

At the police department, he said, “You’re taking the resources you’re using now and aligning mission better. The thing is, when you reduce violent crime, it has a ripple effect. It reduces other crime as well.”

The criminal justice system in St. Louis has smart, dedicated people who could do this. Whether it has the will to do it, and the willingness to give up its traditional turf battles, are different questions. One thing is certain: It couldn’t hurt.

The seven homicides that occurred in St. Louis between 7:30 p.m. Wednesday and 5 p.m. Thursday were more or less typical examples of this wors…

How to get better information on firearm crime

The time is now for change in St. Louis

Maybe we have had to hit bottom before we can unite as a region and deal with our problems instead of business as usual. We have looked the ot…

Repercussions from Ferguson have changed the atmosphere that the region's biggest police department operates in.

Groups of teens are not a problem, until you add “fight teams” and guns, which add up to mayhem. Or worse.

The reality of crime is bad enough. Panic would be worse.

Editorial: Reducing crime will take money and will, not just a commission and a plan

Then Sgt. Joe McHale of the Kansas City Police Department on the A&E Network's "SWAT" in 2007.