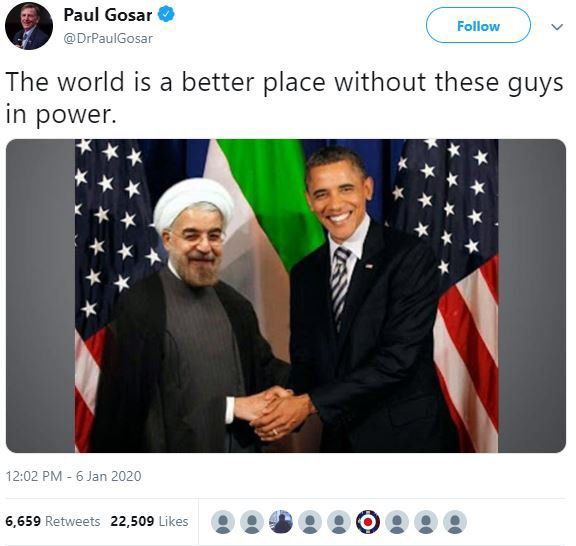 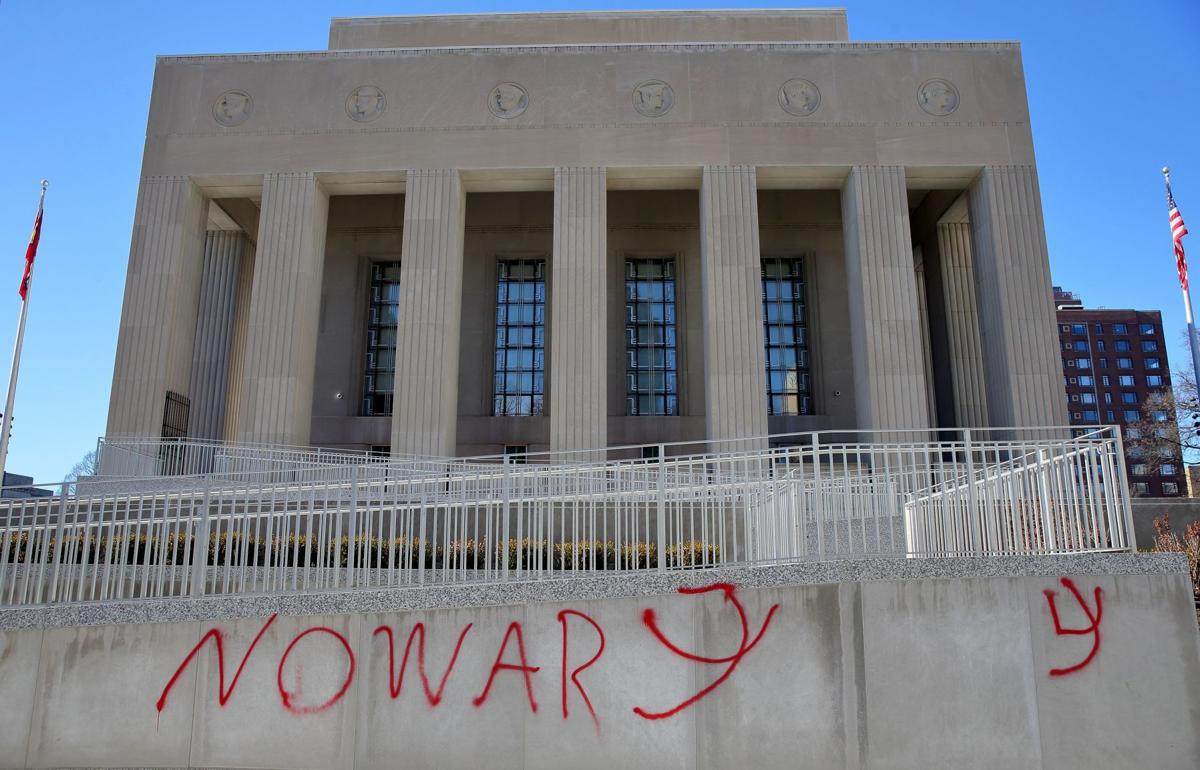 Graffiti was spray-painted on the Soldiers Memorial in St. Louis as seen on Sunday, Jan. 5, 2020. Photo by David Carson, dcarson@post-dispatpch.com

No place for ‘no war’ message

People might be well justified in opposing the Trump administration’s dangerous actions against Iran, but nothing justifies defacing the Soldiers Memorial with “no war” graffiti. Exterior walls of the memorial, which reopened in late 2018 after a lengthy renovation, were spray-painted red last weekend, as if to suggest that veterans of past wars somehow bore responsibility for the decisions made by the current president. The “no war” message was accompanied by a childish artistic attempt to spray-paint a communist hammer and sickle.

“Whether people are for the war or against the war or for Trump or against Trump, there’s no need to graffiti a national monument like the Soldiers Memorial,” Thomas Maier, who helped to remove the graffiti, told KMOV.

Whatever the motivation, the graffiti should never be confused with the exercise of free speech. It was vandalism, pure and simple.

None dare call it humor

Comedian Ricky Gervais stated from the outset of last Sunday’s Golden Globe Awards ceremony that he didn’t want to be the host anymore. His tasteless and offensive effort at joke-making virtually assured he’ll get his wish. Don’t take our word for it; just Google the video of actor Tom Hanks’ reaction to some of Gervais’ worst wisecracks, most of which weren’t funny and several of which were downright gross.

In fact, one involving Dame Judi Dench was so over-the-top gross, even Gervais stopped in the middle of delivering it to question whether he should continue. (He did, of course.)

The criticism from actors, directors and reporters who cover Hollywood came fast and furious, prompting Gervais to lash out on Twitter, saying in part, “I always knew that there were morons in the world that took jokes seriously, but I’m surprised that some journalists do.”

Weirdly, conservative gun-crazed commentator Dana Loesch came to his defense: “Oh garbage,” she wrote, contending that Gervais “demonstrated that good comedians go after everyone. No one should be safe, but the prevailing thought these past 10+ years is that one group IS exempt. [Hollywood elitists] can lecture from the stage but he can’t mock their inconsistencies? You prove his point.”

Perhaps. But there were no inconsistencies in the Judi Dench joke. It was just pure, unadulterated bad taste.

Going for broke on misinformation

Rep. Paul Gosar, R-Ariz., doubled down when he was caught tweeting out a doctored photo depicting former President Barack Obama shaking hands and posing for a photo with Iranian President Hassan Rouhani. No such meeting or handshake ever happened between the two leaders. Not only did Gosar try to further the myth perpetrated by the fake photo, he included in the caption, “The world is a better place without these guys in power.”

Wrong again. Rouhani is still very much in power.

Rather than retract it or clarify that he was duped by the photo he found online, Gosar tweeted that “No one said this wasn’t photoshopped. No one said the president of Iran was dead. No one said Obama met with Rouhani in person.”

Sadly, “no one said” is the new criterion for politicians spreading deliberately misleading photos online.

Hallmark, the storied greeting-card company based in Kansas City, is laying off 400 workers and making other major changes to the century-old, family-owned business. It’s perhaps a sign of an era in which consumers are opting out of both printed material and sentimentality.

Hallmark began in the early 1900s as a small postcard company based in a Nebraska bookstore. It moved to Kansas City by 1910. The company would subsequently be credited with inventing not just the greeting-card industry but today’s notions of gift-wrapping, Christmas ornaments and a bevy of new holidays. By the 1950s, the “Hallmark Hall of Fame” was bringing to television the kinds of emotional oomph that it had long been printing on its cards. Today, Hallmark has its own cable television channel, whose programming seeks to match the syrupy sentimentality and romance of its cards.

The latest layoffs represent less than 1.5% of the company’s 30,000 national workforce, but still are a significant indicator of change. They are in response to what a company statement called “the rapidly evolving retail and consumer environments.” Kind of hits you right there, doesn’t it?

What good is guano (also known as bat poop)? Missouri researchers are using it to better understand the long-term effects of climate change. As the Post-Dispatch’s Bryce Gray reported this week, researchers from Washington University, the Missouri Botanical Garden and Virginia Tech are working in Missouri caves, collecting and analyzing samples of the guano from accumulated piles several feet deep and thousands of years old.

By taking “cores” from the piles (the same concept as glacier ice-core samples), the scientists can learn all kinds of things about what the bats’ environment here was like millennia ago. They hope to better understand what the carbon and nitrogen levels were in the air, what kinds of pollen the bats were cleaning from their fur, what kinds of plants the insects were eating before the bats ate them.

All of it adds to the record of knowledge about how Earth’s climate has changed with the advent of human activity. As researcher Rachel Reid of Virginia Tech put it: “With a big enough pile, you can go back a long way.”

Circuit Attorney Kim Gardner’s federal civil suit against a host of allegedly racist co-conspirators is, to say it politely, a longshot.

Editorial: If Parson is so proud of his abortion stand, why does his campaign downplay it?

The governor who signed into law one of the nation's most onerous anti-abortion bills appears to be hiding that fact on his campaign website.

New Missouri legislation would crack down on people who bring pets into restricted places under the guise that they’re service animals. It’s long overdue. Trying to pass off Muffy the pomeranian as a guide dog in order to bring her into a restaurant diminishes public acceptance of actual service animals — and the humans who need them.

Missouri's voter-ID law has always been a solution in search of a problem. A state Supreme Court ruling will prevent abuses of it.

Editorial: President claims to champion Obamacare's top benefit while trying to kill it.

President Trump, like Missouri Sen. Josh Hawley, claims to protect medical coverage that the entire GOP is in fact attempting to eliminate.

Editorial: Parson should be leading on Medicaid expansion, not continuing the GOP's intransigence.

Editorial: Iran mimics U.S. in bid to avoid responsibility for shooting down airliner.

The pattern is familiar when tragedy strikes in the U.S.-Iran conflict: Deny, deflect blame and lie. When will leaders try communicating?

Gov. Mike Parson knows what it takes to be a leader. The test is whether he can lead effectively on combating St. Louis gun violence.

Editorial: Legalizing marijuana was half the battle. Banking the profits remains a big hurdle.

Cannabis sales are legal in 33 states, but banks still can't accept the proceeds. It's a multibillion-dollar problem in need of a federal fix.

Graffiti was spray-painted on the Soldiers Memorial in St. Louis as seen on Sunday, Jan. 5, 2020. Photo by David Carson, dcarson@post-dispatpch.com