Editorial: Ten good reasons to vote against the transportation sales tax
0 comments
Share this
{{featured_button_text}}
1 of 2 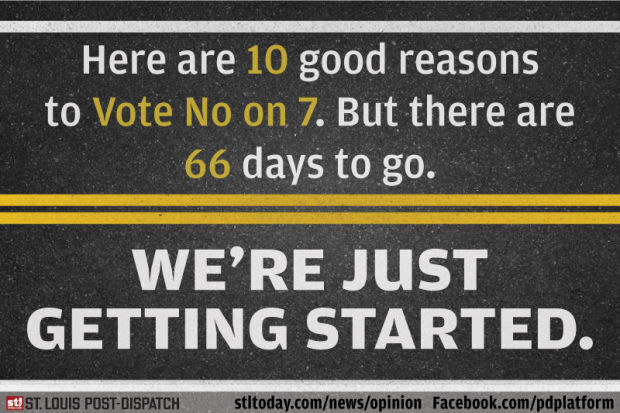 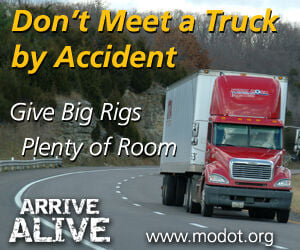 And while you're giving them plenty of room, give them a free ride on the new transportation sales tax.

It has been said of this editorial page that we’ve never met a tax increase we didn’t like. That’s not entirely true, but it’s close. We tend to favor fair taxes used in the common good for vital public services.

But now we’ve studied the three-quarter-cent state sales tax increase that the Legislature proposed and Gov. Jay Nixon placed on the Aug. 5 ballot. To say we don’t like it is an understatement. It is an abomination.

The proposed constitutional amendment went through the Legislature as House Joint Resolution 68, the Missouri Temporary Sales Tax Increase for Transportation. It hasn’t yet been certified by the secretary of state’s office, but the office said that when that formality occurs, it will be titled on the ballot as Amendment 7.

There is a lot of juice behind this proposal, which would result in the largest tax increase in state history — estimated at $480 million annually for the next 10 years for state highways and bridges and $54 million for local road projects.

Most business and labor interests like it, as do most Republicans and Democrats. The concrete lobby — engineers, suppliers, contractors and trade unions — will spend heavily on the “Yes on 7” campaign.

One: It’s simply not a fair tax. HJR 68 passed the Legislature just eight days after lawmakers overrode Gov. Nixon’s veto of Senate Bill 509, a $620 million-a-year income tax cut heavily weighted to the wealthy and affluent business owners. Meanwhile, the burden of the sales tax increase would fall most heavily on the poor and working class.

The poorer you are in Missouri, the more of your household income you have to spend on sales and excise taxes. (An excise tax essentially is a hidden sales tax rolled into the price of a specific good or service, like gasoline or phone service).

Two: It distorts priorities. The income tax cut, in combination with the proposed sales tax hike, not only would create an unconscionable shift in the overall state tax burden, but would elevate one vital need — roads and bridges — over every other vital need. If Amendment 7 passes, Missourians can drive better roads to crummier schools. This is not progress.

The region’s overabundance of local governments and taxing districts have found sales tax increases easier to pass than property tax increases. The tax-increment financing wars have made things worse. The blood is about gone from the sales tax turnip.

Four: For some reason, perhaps because the price of gasoline is so prominently displayed, sales taxes poll better than increased fuel taxes. In Missouri, the combined federal and state tax on a gallon of gasoline is 35.7 cents, of which 17.3 cents is Missouri’s. That’s sixth-lowest in the country and hasn’t changed since 1996.

If the tax then had been indexed to inflation, it would be at least 28 cents a gallon today. Because of high worldwide demand for materials used in road construction, those costs outpace the Consumer Price Index, but if both the state and federal fuel taxes had been indexed to the CPI, we wouldn’t be having this discussion.

Five: Money is still cheap and Missouri has unused bonding capacity. Joseph Miller, a policy researcher for the libertarian Show-Me Institute, has proposed that Missouri fund its transportation needs with a bond issue backed by tolls and with higher fuel taxes. We agree, but the fuel tax allocations need change. To wit:

Six: Fuel taxes are only spent on certain roads and bridges, the ones under the auspices of the Missouri Department of Transportation. On a per-capita basis, MoDOT spending is heavily weighted to rural areas. Rural highways already get disproportionate benefit from fuel taxes. Doing the same with sales taxes, most of which are paid by urban Missourians, would compound the inequity.

Seven: Speaking of inequities: Unless their drivers spend a lot of money at truck stops, interstate trucking companies would get a free ride on the extra half-billion a year in sales taxes from Amendment 7. Also getting a free ride: Internet retailers like Amazon.com that don’t charge sales taxes. The measure would further deepen the hole that Main Street retailers find themselves in.

Nine: As with the state’s effort last winter to give away the candy store to entice Boeing Co. into building 777X jetliners in St. Louis, it’s sad that certain labor unions are so eager to sell out their working-class brothers and sisters. A half-billion a year in road and bridge contracts would support a couple of thousand union jobs, but it would make life more miserable for everyone else. Solidarity ain’t what it used to be.

Ten: Bismarck said you shouldn’t watch either laws or sausage being made. As we’ve noted previously, the sausage factor behind the transportation tax proposal was very high, even for ethics-free Missouri. Former House Speaker Steve Tilley, R-Perryville, set up a study committee on transportation funding before resigning to go into the lobbying business. And then, surprise! The committee recommended the tax, and Mr. Tilley signed up the concrete lobby as clients.

Those are 10 good reasons to Vote No on 7. But there are 66 days to go. We’re just getting started.

Increase the gasoline tax to pay for publicly maintained roads

For once the Post-Dispatch has gotten it right ("A tax to hate," June 1) when it comes to a proposed tax — in this case, the Missouri sales ta…

Under-funding of rails, ports is another reason to oppose tax

Thanks to your editorial board for the nearly comprehensive list of reasons to vote no on Amendment 7, the three-quarters-cent sales tax for t…

I was glad to read the editorial “A tax to hate” (June 1) criticizing Amendment 7, which would increase the sales tax to fund the highways. As…

City residents looking for reasons to vote against the transportation sales tax have plenty, thanks to Mayor Francis Slay himself ("St. Louis …

Solving the state's disagreement over how to pay for roads

A recent Associated Press article by David A. Lieb highlighted the differing opinions held by Gov. Jay Nixon and Sen. Mike Kehoe on the propos…

Transportation tax is the wrong means to the wrong ends

An August ballot initiative would raise sales tax statewide by three-quarters of a cent for the next 10 years. This tax, like all regressive t…

Editorial: On Tuesday, vote No, No, No, No and No

Readers' comments in support - and against - transportation sales tax

And while you're giving them plenty of room, give them a free ride on the new transportation sales tax.