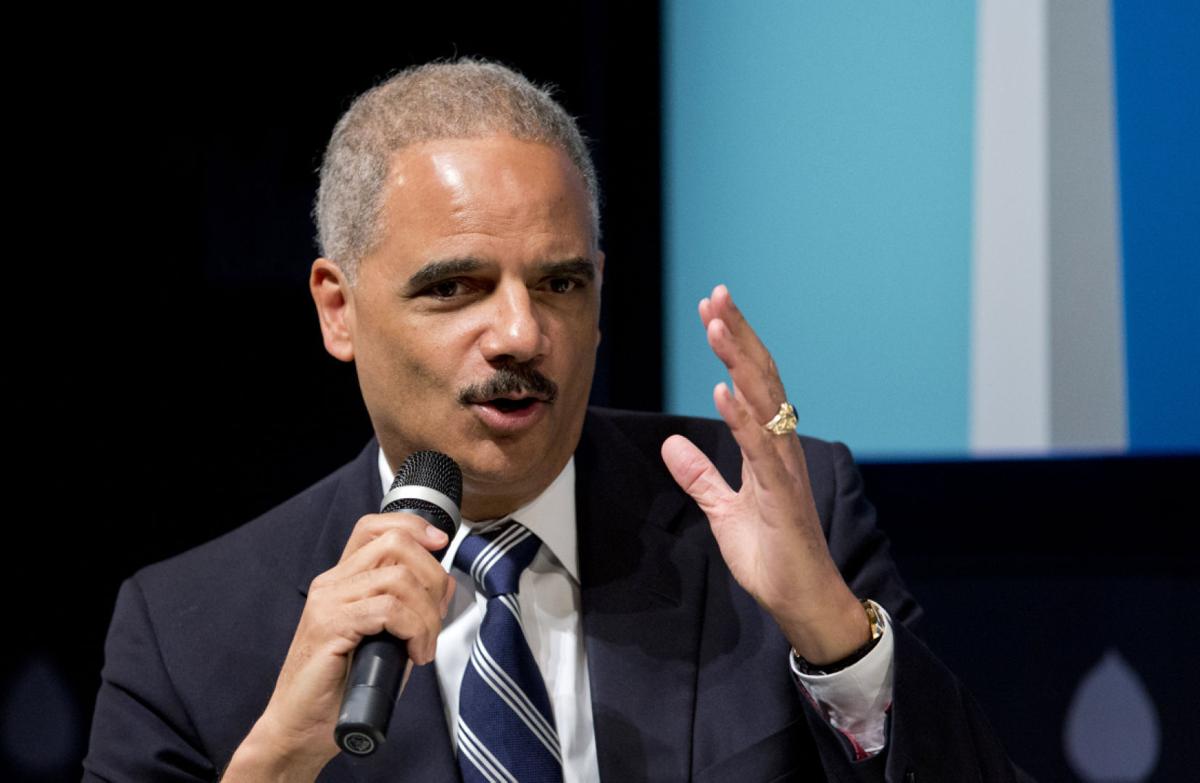 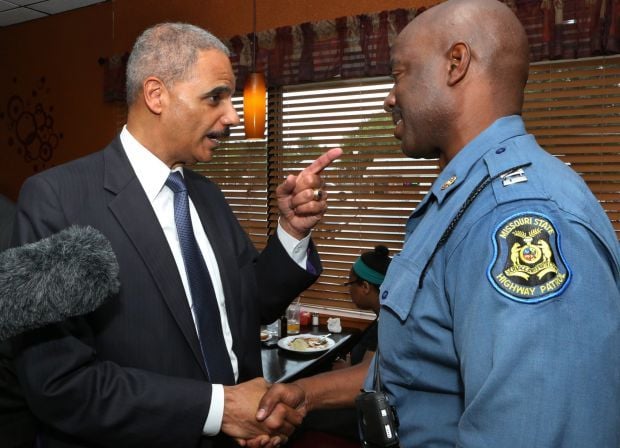 Attorney General Eric Holder tells Missouri Highway Patrol Capt. Ronald S. Johnson that he needs to be sure to get some sleep during a visit at Drake's Place Restaurant in Ferguson on Wednesday, Aug. 20, 2014. Photo by J.B. Forbes, jforbes@post-dispatch.com

The obscure intersection of Canfield Drive and Copper Creek Court in Ferguson has turned out to be a crossroads for American policing.

Since then-Ferguson Police Officer Darren Wilson shot and killed Michael Brown near that intersection last Aug. 9, “Ferguson” has become shorthand for a wide variety of complaints about law enforcement practices, here and around the country. Not all of those complaints are valid, but some surely are.

On Wednesday, the U.S. Department of Justice said witness testimony and forensic evidence do not refute Mr. Wilson’s assertion that he feared for his life when he shot Mr. Brown, even though the 18-year-old was unarmed. The same conclusion was reached in November by a St. Louis County grand jury.

But later Wednesday, Attorney General Eric Holder addressed the findings of his department’s investigation into the circumstances underlying the community outrage over Mr. Brown’s death. “Some of those protesters were right,” Mr. Holder said, adding that the findings of the six-month investigation of the Ferguson Police Department are “searing.”

The Ferguson report came two days after the release of interim recommendations from President Barack Obama’s Task Force on 21st Century Policing. What happened in Ferguson leading up to Aug. 9 underscored the importance of the task force recommendations: Police practices in large parts of America must change.

That’s already happening in some of the nation’s more forward-thinking police departments, as well as in the two dozen departments operating with Justice Department supervision under court-approved consent decrees.

Ferguson will have to reach its own agreement with the Justice Department or face the possibility of a civil rights lawsuit. Either way would be expensive, raising the possibility that the city could choose to disband its 52-officer police force. The neighboring city of Jennings did that in 2011, choosing to contract for services from the St. Louis County Police Department. Ironically, one of the newly unemployed Jennings officers, Darren Wilson, was hired on in Ferguson.

The public interest, in terms of both finances and public safety, suggests that dumping its police department would be the wisest course for Ferguson — and indeed, for most of the nearly five dozen other police departments in St. Louis County. As the president’s task force noted Monday, “small forces often lack the resources for training and equipment accessible to larger departments.”

Too many of them in St. Louis County do what the Justice Department found Ferguson to be doing: writing traffic tickets, 90 percent of them to black motorists, to raise revenue for the city.

The DOJ found racist emails on the city’s computer system. It found that when Ferguson police dogs were released on someone, 100 percent of the time that someone was black. It found overuse of Tasers and abuse of the mentally ill. It found that officers sometimes competed to see who could write the most citations for a single traffic stop.

All of that is despicable, speaking to what Mr. Holder called “implicit and explicit” racial bias. But the most telling sentence in the report was this:

“City officials have frequently asserted that the harsh and disparate results of Ferguson’s law enforcement system do not indicate problems with police or court practices, but instead reflect a pervasive lack of ‘personal responsibility’ among ‘certain segments’ of the community.”

According to investigators, Ferguson officers routinely stopped African-American pedestrians to harass them for their “manner of walking along a roadway.”

One 32-year-old man was cited in 2012 for not wearing a seat belt while his car was parked at a city park. He was accused of being a pedophile, arrested at gunpoint and charged for making a false declaration — he gave his name as “Mike” instead of “Michael.”

Let the firings begin. And let them begin at the top.

“Good supervision would correct improper arrests by an officer before they became routine,” the DOJ report said. “But in Ferguson, the same dynamics that lead officers to make unlawful stops and arrests cause supervisors to conduct only perfunctory reviews of officers’ actions — when they conduct any review at all. FPD supervisors are more concerned with the number of citations and arrests officers produce than whether those citations and arrests are lawful or promote public safety.”

The 21,000 residents of Ferguson, the third of them who are white and the two-thirds who are black, deserve better. Dump this police force ASAP.

Since 2000, data compiled by the Missouri attorney general’s office have shown that in most county municipalities, blacks are far more likely than whites to be stopped for traffic offenses.

Data compiled by the legal activist group Arch City Defenders and the St. Louis University Law School have amply demonstrated how the county’s 81 municipal courts, in league with the traffic law industry, shake down the poor. The practice is particularly prevalent in heavily black north St. Louis County, including in cities run by elected black politicians.

Twenty-first century policing must turn away from a “confrontation” model to a “guardian” model, the president’s task force said. The focus should be on building trust, not piling up statistics.

Everyone, including the cops, is safer. If this could be the eventual legacy of the Ferguson tragedy, what a gift it would be.

The state Constitution, the Court's own precedent and its existing Code of Judicial Conduct, demand that the Court continue down its current path and ensure that all judges, including those at municipal divisions, are following the same ethical codes and avoiding conflicts of interest.

The skin color of a firefighter doesn't matter the way it does for a police officer. Firefighters are not making judgment calls about who to stop, who to question and who to put in jail. Their biases don't factor in to how they put out fires.

Despite that, there is there is reason for concern that there are too few African-American firefighters compared to minority populations throughout St. Louis County.

Editorial: Ferguson in a futile fight with the hammer of justice

The Ferguson City Council is playing a game of chicken with the U.S. Department of Justice that it is going to lose.

The city's leaders are fooling themselves if they think the consent decree the Justice Department submitted to them after months of negotiation is up for retooling. Ferguson does not have the upper hand in dictating terms of the decree, which is intended to reform the city's police department and court, to the federal government.

Repercussions from Ferguson have changed the atmosphere that the region's biggest police department operates in.

The Missouri Legislature should pass Mr. Schmitt's bill. It's a winning hand.

Editorial: Civilian Oversight Board can be where trust begins

What do you call a Civilian Review Board without subpoena power? A start.

Attorney General Eric Holder tells Missouri Highway Patrol Capt. Ronald S. Johnson that he needs to be sure to get some sleep during a visit at Drake's Place Restaurant in Ferguson on Wednesday, Aug. 20, 2014. Photo by J.B. Forbes, jforbes@post-dispatch.com