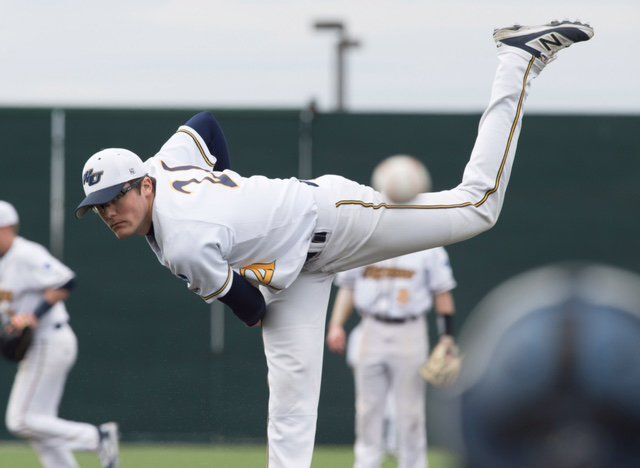 Josh Fleming pitches for Webster University in a game against Benedictine on March 3, 2017. (Tim Parker)

Their paths first crossed in the clubhouse of the Durham Bulls after Peter Fairbanks had been traded from the Texas organization and Josh Fleming promoted from Tampa Bay’s Class AA club.

Fairbanks, who is from Webster Groves, had just enough background information about his pitching counterpart from Columbia, Ill., to give him some trouble.

“I’m from Columbia, which is essentially St. Louis, so I tell people I’m from St. Louis,” Fleming said. “So he tells me, ‘So you’re the kid who thinks he’s from St. Louis but is from Illinois?’ I thought he didn’t like me.”

Fleming, who also pitched for Webster University, just didn’t know Fairbanks. This is the guy who walked into Fenway Park during the Stanley Cup Finals last year wearing a Blues hat and shirt. He’s proud of his hometown.

“I let him know he’s not actually from St. Louis,” Fairbanks said. “I just asked what state was on his driver’s license. I just like to give him trouble about it.”

They spent a couple of weeks together in Durham before Fairbanks was promoted to pitch for the Rays in September. They were reunited at spring training this year — the first for both in the major league camp.

And when the players dispersed because of the COVID-19 shutdown, they joined forces back home in what we’ll say is Kirkwood, to avoid further disputes.

Fairbanks and Fleming have been training together five days a week since leaving Florida. They meet at Vianney High to play long toss, pitch off the mound and throw to hitters while awaiting word on the start of the season.

“I talked to our pitching coach, and he said ‘You’re most likely over-prepared,’” Fairbanks said. “I can tell throwing off the mound if it’s where it should be. Things have been pretty consistent from where I was this spring, which was good.”

Fairbanks hopes to be on the major league roster if and when the season starts. Expanded rosters would certainly add to his chances after he made 13 appearances with the Rays in September, going 2-1 with two saves and a 5.11 ERA.

Fleming’s situation is more uncertain. The lefthander has been working his way through the minors. Last season he was named MVP of the Class AA Montgomery Biscuits after finishing 11-4 with a 3.31 ERA.

“It was awesome to be around the big league guys and future teammates in spring training,” Fleming said. “I was pretty sure I would be starting in Triple-A. But the big league guys were welcoming and made me feel like I’d been a teammate for years. I felt comfortable and like I belonged up there.”

Fleming, a fifth-round pick in 2017, received opportunities to show that he did belong. He pitched eight innings over four games.

In one outing, he started against the Braves and faced what was largely their major-league lineup. In the first inning he struck out Ronald Acuna Jr. and Marcell Ozuna.

Fairbanks pitched five innings without allowing a run in the spring. And he continued to pile up strikeouts, recording 10. Last season in major league stints with Texas and Tampa Bay, he had 28 strikeouts in 21 innings. He feels the trade last season in July made for a good fit.

“I really like what Tampa does and how they go about things,” he said. “It was definitely a different vibe. Tampa Bay is very nerdy in terms of pitching, which is right where I’m at. Very analytical.”

For now, all of the work is being done at a high school field as both try to maintain fitness and stay sharp.

After recovering from two Tommy John surgeries, Fairbanks has seen his velocity improve into the upper 90s. He is working with a more compact motion that he developed after the second surgery.

Fleming made an adjustment as well last season when it was suggested he move from the extreme far right side of the pitching rubber to the left. He responded with two consecutive complete games and a strong finish to the season.

He was hoping another good season would lead to his major league debut in 2020 and the chance to be teammates again with Fairbanks.

“It was kind of crappy timing,” Fleming said of the stoppage. “But if and when baseball comes back, I’ll be ready.”

Both were scrappy players who were great fielders and developed as hitters.

Lefty Sherriff's addition to the Rays roster gives a distinct Missouri vibe to Tampa Bay's 'stable' of relievers, with a Webster Groves grad at closer.

Cardinals' Wainwright is one of three finalists for Marvin Miller Award

Players' Choice honors to be announced next Thursday. St. Louisan Williams, reliever for Milwaukee, is a nominee for top rookie.

Beloved outfield coach, who has high blood pressure, stepped away after the team's coronavirus outbreak.

Cardinals' World Series hero Anthony Reyes was a starter — but he puts out fires now.

He started Game 1 in 2006 Series win over Detroit Tigers.

Eno Slaughter scored what was undoubtedly the most famous run in Cardinals World Series history.

Josh Fleming pitches for Webster University in a game against Benedictine on March 3, 2017. (Tim Parker)