99 years ago today: The Birds on the Bat make their Cardinals debut
0 comments
Share this
{{featured_button_text}}
Derrick Goold

A meeting that Cardinals general manager Branch Rickey attended on Feb. 16, 1921, launched one of the most famous logos in professional sports.

Allie May Schmidt, a member of Ferguson Presbyterian Church, took it upon herself to decorate the tables for that day’s baseball discussion. She gathered red carnations — as close to the “cardinal” red as possible — for the centerpiece and wanted to leave gifts around each one for the people around it. Looking out the window she saw a fresh blanket of snow and two bright red birds alight on a shrub’s branch. She connected the Cardinals to the baseball team and began to make the cutouts.

Her father, Edward H. Schmidt, sat at the same table as Rickey during the Men’s Fellowship Club’s meeting, and the two, intrigued by Allie May’s birds, began discussing a symbol for the team. Schmidt ran the art department at St. Louis’ Woodward & Tiernan Printing Co., and he later presented Rickey with several concept drawings.

The twig was replaced by a bat for a solo cardinal to perch, and another sketch had two birds balanced on a bat. In 1922, the team put the first birds and the first bats on their jerseys, at a cost of $3.75 each for 75 uniforms.

The first game to feature the jerseys was on April 8, 1921, an exhibition game against the Browns.

Rickey went to Ferguson for a meeting. He returned with a symbol that has meaning — for generations since and generations to come. 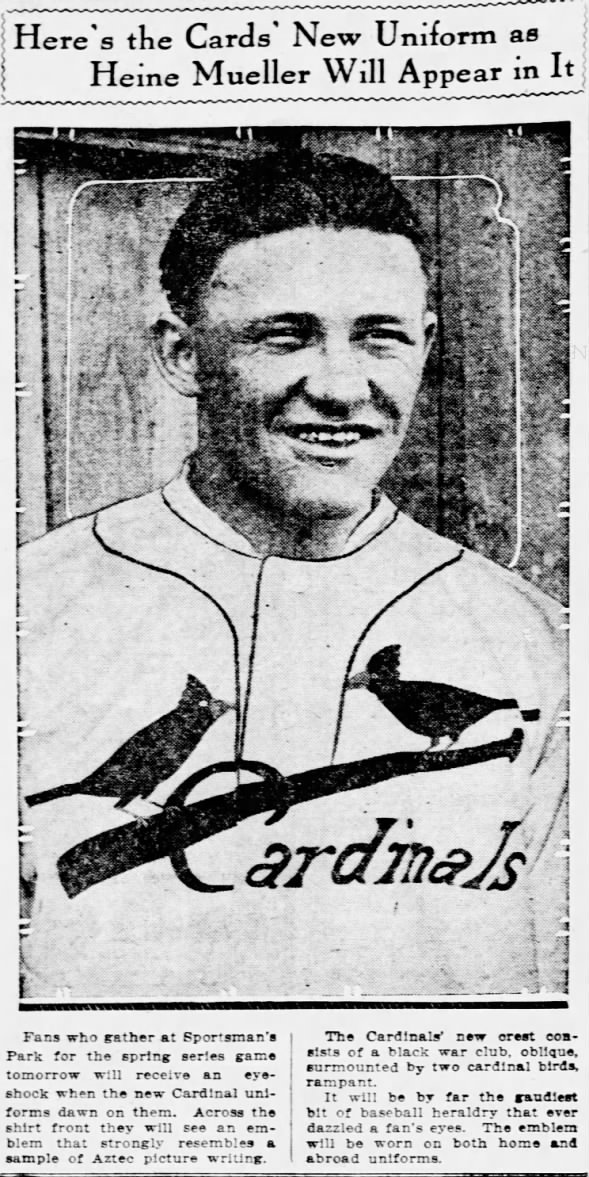 Arenado, Hicks, Molina fined, not suspended, for roles in Saturday's incident in Cincinnati.

A dugout-clearing fracas in the fourth inning leads to Castellanos' ejection, but other suspensions could follow. Wainwright does not outlast the third inning.

Six Cardinals Hall of Famers are on hand for ceremony; two legendary ones (Gibson, Brock) are not

Righthander gives up just one hit in six innings. Molina rewards him with two-run homer in seventh. And Carlson slams the door with four-run homer in ninth.

Once adamant about batting 'cleanup,' Arenado cool hitting third, and no, Shildt didn't toy with pitcher at No. 8

With Cards' right fielders hitless, Carpenter goes to second and Edman to right

Williams and Dean are nothing for 15 with nine strikeouts. Carpenter is nothing for three with two strikeouts and a walk. Gant to face Miami ace Alcantara.

The text messages on the group chat that started it all began the night before, buzzing back and forth with information about the time and who…

Reds right fielder, a day after sparking a fracas on the field, triples and has home run sends Cardinals to 12-1 dud.