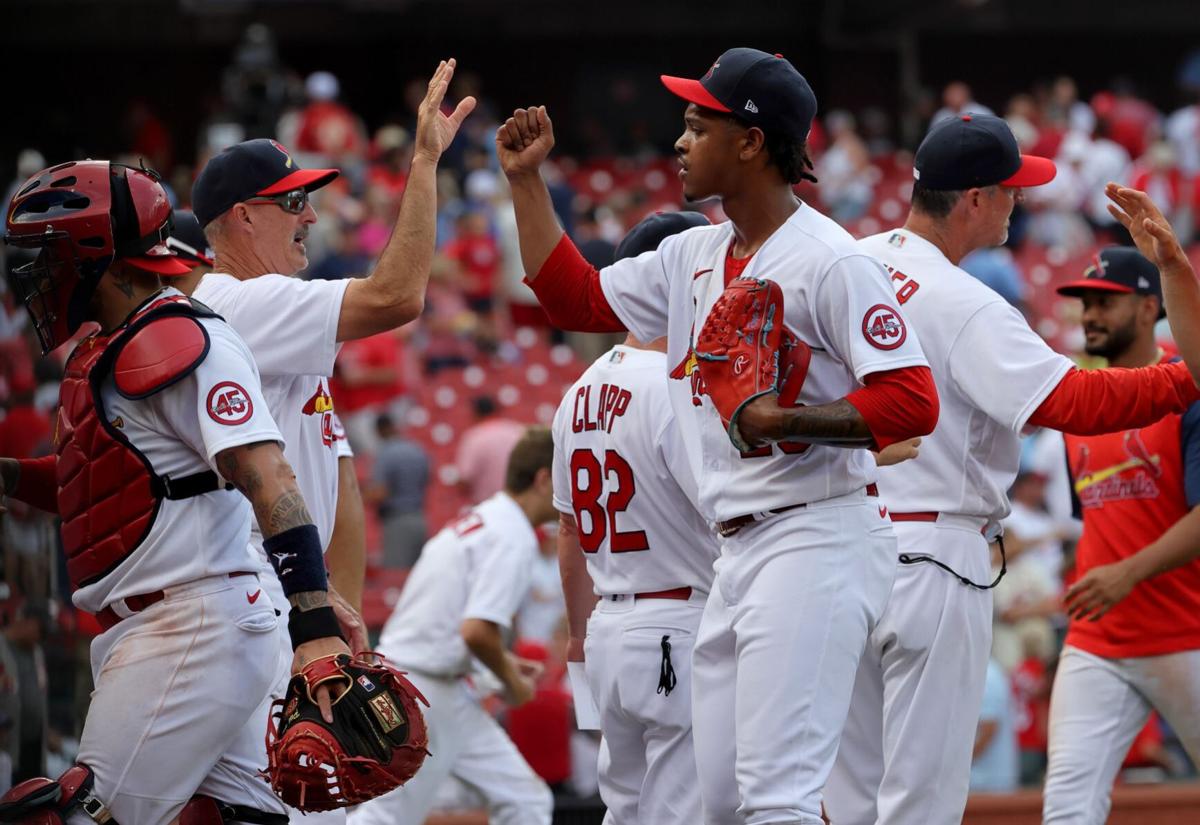 The Cardinals Alex Reyes, center, is congratulated by pitching coach Mike Maddux after recording his 24th consecutive save, against the San Francisco Giants at Busch Stadium in St. Louis on Sunday, July 18, 2021. It was a record breaker, giving him the most consecutive saves converted to start a major-league career. David Carson, dcarson@post-dispatch.com

Cardinals catcher Yadier Molina, left, congratulates Alex Reyes, who on Sunday had just recorded his 24th consecutive save — a major-league record for most successful such opportunities to start a career.

For a job that Alex Reyes ultimately doesn’t want, it turns out he’s pretty good at it.

The Cardinals closer by necessity pitched a scoreless ninth inning on Sunday — but not until he had put the go-ahead run on base — to give the Cardinals a 2-1 win over the Giants and convert his 24th consecutive save attempt. In his young career as a closer, he has had only 24 save opportunities, and his perfect record gives him the major-league record for most consecutive successful save chances to start a career.

“That’s a very, very, very impressive, special record,” said Cardinals manager Mike Shildt, on a quest for as many modifiers as he could find. “Any time you hold a major-league record for anything, it says something in this game and he’s got a record that’s very impressive.”

Along with breaking the record set by LaTroy Hawkins of the Twins in 2001, Reyes also set a Cardinals record for consecutive converted saves at any point in his career, eclipsing the 23 straight that Jason Isringhausen had spanning the 2007 and 2008 seasons. Reyes’ 22 converted saves this season matches Tom Henke in 1995 for the most at the start of a season by a Cardinal.

“It’s just an honor to be able to say that or tell my kids that one day,” Reyes said, “that I was able to do something like that. It’s super, super, I would say ‘dope’ where I grew up, but it was fun. It’s always fun to be out there and . . . be able to pitch in that situation. Being able to get a save, it’s always big.”

The journey to the record has, quite literally, been a long one. Save No. 1 came in 2016, when Reyes was a 21-year-old phenom waiting to take the baseball world by storm. Then there was the Tommy John surgery that cost him the 2017 season and limited him to four big-league innings in 2018. Then he had shoulder trouble and threw just three innings in 2019. Last season, he threw just 19 2/3 innings and picked up save No. 2.

“It’s even more special because of the adversity he’s overcome,” Shildt said.

Saves just weren’t part of Reyes’ resumé. Coming into this season, he had appeared in 117 professional games, at all levels, and had just two saves. In the minors, 82 of his 85 games were as a starter. In the majors, he’s had to rethink his game.

“As a closer, you kind of go out there and throw what you have that day,” he said. “If it’s just my slider that I’m feeling, then maybe that day I could probably get by with one or so offspeeds. But in the rotation, you have to have all your weapons and you have to attack the zone consistently. As a reliever, I just use my pitches differently.”

And there’s something else he’s found about being a reliever.

“It’s a fun job,” he said. “It’s fun to be out there when everything is on the line. The tying run was on second base today. Every pitch there meant the game. It’s a fun spot to be in.”

Of course, the tying run was on second Sunday because Reyes had walked two pinch-hitters with one out in the ninth. He got the second out on a long fly ball by Austin Slater into the right field corner that Dylan Carlson snagged on the run, then finished the game by getting Donovan Solano to fly out to center.

When Harrison Bader closed his glove on the ball, catcher Yadier Molina came out to the mound and gave Reyes a hug and then, after some other players had congratulated him, Molina gave him a bigger hug and a pat on the butt.

That inning points to something that makes Reyes’ run even more of a feat: In his 22 saves this season, which cover 24 innings, he has walked 12 batters. Only six of those saves has featured a 1-2-3 ninth inning. Overall, he has an 18.8% walk rate, and a 1.45 ERA. No other pitcher in big-league history, with a minimum of 40 innings, has had an ERA lower than 2.89 with a walk rate at 18% or higher.

Somehow, Reyes is making it work.

“I don’t think anybody wants to go out and throw four balls and give a guy a free pass,” Reyes said. “I definitely prefer to give up base hits (as opposed to walks). Those are things I’ve battled throughout my career and thankfully I’ve been able to bounce back on the next few hitters and execute pitches.”

“He’s going to be able to compete when the situation gets hairy,” Shildt said. “He’s had some quick ones, some with traffic (on the bases) but there’s solace knowing he’s going to stay present and execute and make his pitches and that’s all you can ask. . . . He’s our guy.”

On the eve of Friday's 3 p.m. trade deadline, the rich started to get richer, and some fan bases got restless. Also: Mikolas' asserts strength in rehab start.

Happ was acquired in exchange for a reliable reliever and a Class AA lefty, and outfielder Lane Thomas was swapped for Lester.

Cardinals acquire two late-30s veteran starters who have struggled by sending two players to Twins and Nats from their active roster in final hour before Friday's deadline.

Young righthander, winless in 18 starts over two seasons, has been optioned six times this year.

The Cardinals Alex Reyes, center, is congratulated by pitching coach Mike Maddux after recording his 24th consecutive save, against the San Francisco Giants at Busch Stadium in St. Louis on Sunday, July 18, 2021. It was a record breaker, giving him the most consecutive saves converted to start a major-league career. David Carson, dcarson@post-dispatch.com

Cardinals catcher Yadier Molina, left, congratulates Alex Reyes, who on Sunday had just recorded his 24th consecutive save — a major-league record for most successful such opportunities to start a career.