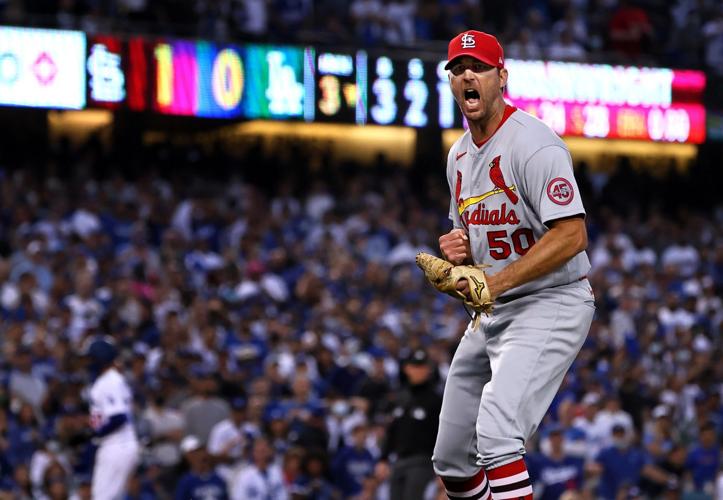 Pitcher Adam Wainwright celebrates after Cardinals fielders turned a double play with the bases loaded to end the third inning of the National League wild-card game against the Dodgers on Wednesday, Oct. 6, 2021, in Los Angeles.  LA won 3-1. 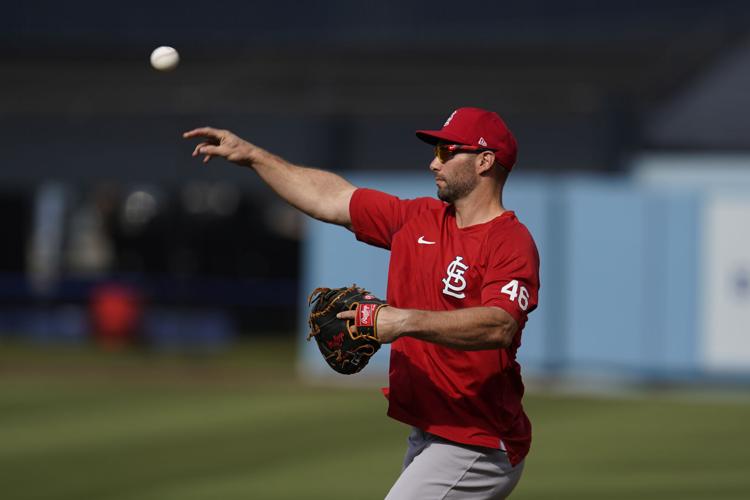 Cardinals first baseman Paul Goldschmidt warms up before the National League wild-card game against the Dodgers on Oct. 6, 2021, in Los Angeles. 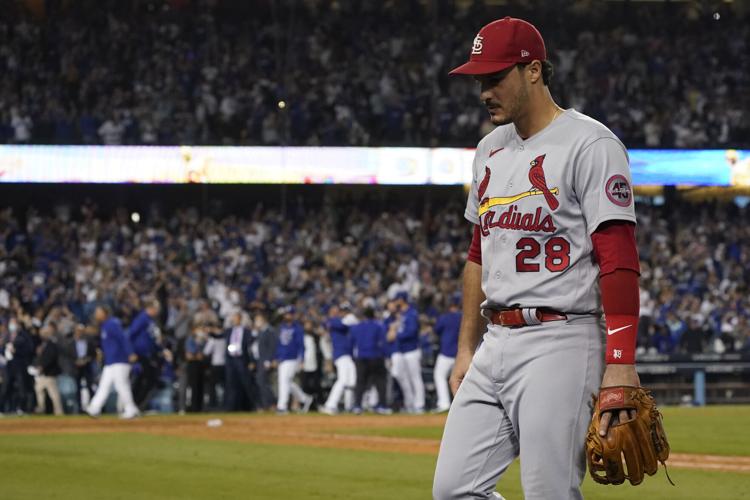 Cardinals third baseman Nolan Arenado leaves the field after the Dodgers' Chris Taylor hit a two-run homer in the bottom of the ninth inning to give his team a 3-1 victory in the National League wild-card game on Oct. 6, 2021, in Los Angeles.

SAN DIEGO — The Cardinals’ team that returns to St. Louis from the last lengthy trip of the season will be different than the one that left Monday for San Diego.

It could sport the newest member of the 700-homer club or tote the drained champagne bottles of a second division title since 2015, or both. When these Cardinals return to Busch Stadium in 11 days they’ll have faced three winning teams, crisscrossed three time zones and explored what to do with three outfield positions in flux and try to determine who are the best three lefties in the bullpen.

But there’s more to the trip than regular-season polish.

There’s the chance to leave a postseason impression.

“Win or lose, you want to play those games hard enough to where when the Dodgers see that we won and that’s who they’re going to play they go, ‘Aw (dung), you know, Cardinals won, like, we want to play the other team,’” said starting pitcher Miles Mikolas. “Wherever the Padres finish, if they see they’ve got to play us, you want them to think, ‘Aw (walnuts), got to play the Cardinals.’ That extra little bit of doubt or uneasiness that we can instill coming into a series is great.

“So, we’ve got to go there and play hard,” Mikolas concluded. “We’ve got to try to stick it to them.”

The Cardinals open a three-game series against San Diego on Tuesday, travel for a weekend series at Dodger Stadium and then jet to Milwaukee for their final games of the regular season against the second-place Brewers. When the 2022 scheduled dropped about 13 months ago, this stretch loomed as a trap, a late-season swing west vs. two of the league’s top teams spring-loaded to snare a contender. It figured to be a defining trip for the Cardinals.

And it still will be.

Instead of the voyage that could decide the National League Central title — the Cardinals have an eight-game lead with 14 to play — this trip offers a glimpse of what waits beyond that. It’s a dress rehearsal for October.

“I think it’s parallel to our Yankees series and Braves series,” shortstop Paul DeJong said. “We’re playing good teams and we know we’ve got to step it up. So, it’s one of those situations where it’s a good test for us going into October.”

“It’s like a sparring match before the playoffs,” Mikolas said.

For the Cardinals, the trip offers them a chance to test that left hook — and their left jab. Steven Matz rejoined the active roster as a reliever Saturday, earlier than planned.

But the Cardinals long saw this trip as a chance to get their lefty looks against some of the game’s top left-handed batters who will be factors in October. That includes San Diego’s Juan Soto, Los Angeles’ Max Muncy and Cody Bellinger, and Milwaukee’s Christian Yelich. And also to see how Matz does against the right-handed batters sandwiched around them. They’ll get real-time feedback comparing how Matz does and how younger lefties, specifically JoJo Romero and Zack Thompson, do in those spots.

Similarly, the Cardinals are cycling through outfielders looking for the best mix, and switch-hitter Dylan Carlson will get his longest run at center to see if he once again can assert his place as the starter.

At the same time, rookies Alec Burleson and Juan Yepez are auditioning for a role. Burleson and Brendan Donovan have shown enough from the left side of the plate that the Cardinals optioned Nolan Gorman to Triple A on Monday to make a roster spot for Yepez.

The three series gives the Cardinals a chance to see how the young hitters do against late-game relievers already hardened by the pressure of autumn.

“It will come down to that competition of who takes a better at-bat,” manager Oliver Marmol said. “That’s what we’ve done up to this point — evaluate what those at-bats look like off the bench. When they’re in the lineup, what they’re getting beat with, what adjustments are being made, at-bat to at-bat, mid at-bats. So you’re constantly trying to evaluate that on both guys.”

In the first week of the trip, the Cardinals will visit the team that made the biggest splash at the trade deadline and then into the crucible and home of the 101-win Dodgers. Looming over the weekend is that three-game set in LA against a club that already has its 100-win season, is quickly clinching the best record in the NL and has a home run differential of plus-142.

The Cardinals have scored the second-most runs at home this season (372), but they’ve played more home games than other contending clubs. The Dodgers average 5.51 runs per home game, well ahead of the Cardinals’ 4.77 average.

The first two spots on the trip, Petco Park and Dodger Stadium, rank fifth and first in average tickets-sold attendance, respectively. With Albert Pujols two homers shy of becoming the fourth member of the 700 club, expect huge crowds and standing room only.

The three stops on the trip feature three of the top seven pitching staffs at home in the NL. The Dodgers have the lowest home ERA (3.02), while San Diego (3.61) and Milwaukee (3.62) rank closer to average. And while the Cardinals will miss Padres ace and NL player of the week Yu Darvish, they’ll draw San Diego native Joe Musgrove (3.16) and lefty Blake Snell (3.85) — all at a time when the offense wheezed through a home series against Cincinnati.

“There are guys that feel good about their swing right now; there are guys who don’t and are trying to fight through it,” Marmol said. “They’re still wanting to be out there in order to help the team win. They’re navigating it in real time.”

San Diego refurbished its lineup at the Aug. 2 trade deadline by acquiring the best hitter available, Juan Soto, and, as a bonus, switch-hitter Josh Bell. The jolt has not gone as quickly or completely as imagined.

Since the trade, Soto and Bell both have on-base percentages higher than their slugging percentages. Soto has batted .221 with more walks (34) than hits (29), and that’s partially because opponents can sidestep him to face a hitter such as Bell. The switch-hitting first baseman has hit .203 with a .301 slugging percentage since Washington sent the tandem west at the deadline. They’ve combined for 23 RBIs.

There are 40 players in the majors who have more RBIs individually than the Padres’ newcomers have together since Aug. 2, and that group includes the majors’ leader, Cardinals third baseman Nolan Arenado (37), as well as Pittsburgh rookie Oneil Cruz (26) and their Padres teammate Manny Machado (34).

The Cardinals swept the Padres at Busch Stadium when they visited in late May. They lost the Busch series to the Dodgers, two games to one, in July. Overall this season, the Cardinals are 9-8 vs. Milwaukee, so the two games next week will decide the season series.

Entering play Monday, Milwaukee trailed Philadelphia by two games for the final wild-card spot. San Diego had a half-game lead on Philadelphia for the second of three available wild-card berths.

The Cardinals had a bead on being the third seed into the postseason as the division champ with the third-best record. That would mean hosting the sixth-seed for a best-of-three wild-card round, all of which would be played at Busch Stadium.

That sixth seed could be San Diego. It could yet be Milwaukee.

Based on the current standings, the Dodgers would not face the Cardinals in the postseason until meeting in the National League Championship Series. This upcoming weekend series is not quite a preview and far more than a review. It will pit the teams with the best records since Aug. 1, the only teams in the majors to win 30 games since then. The Cardinals and Dodgers have each won 33. To borrow from Mikolas’ analogy — it’s the weigh in.

This is the trip the Cardinals do some sizing up and get sized up.

“We’re looking forward to this West Coast trip for sure — two good teams followed by Milwaukee,” Marmol said. “You want their best and see how you match up against it. That’s just the competitive part.”

Pitcher Adam Wainwright celebrates after Cardinals fielders turned a double play with the bases loaded to end the third inning of the National League wild-card game against the Dodgers on Wednesday, Oct. 6, 2021, in Los Angeles.  LA won 3-1.

Cardinals first baseman Paul Goldschmidt warms up before the National League wild-card game against the Dodgers on Oct. 6, 2021, in Los Angeles.

Cardinals third baseman Nolan Arenado leaves the field after the Dodgers' Chris Taylor hit a two-run homer in the bottom of the ninth inning to give his team a 3-1 victory in the National League wild-card game on Oct. 6, 2021, in Los Angeles.