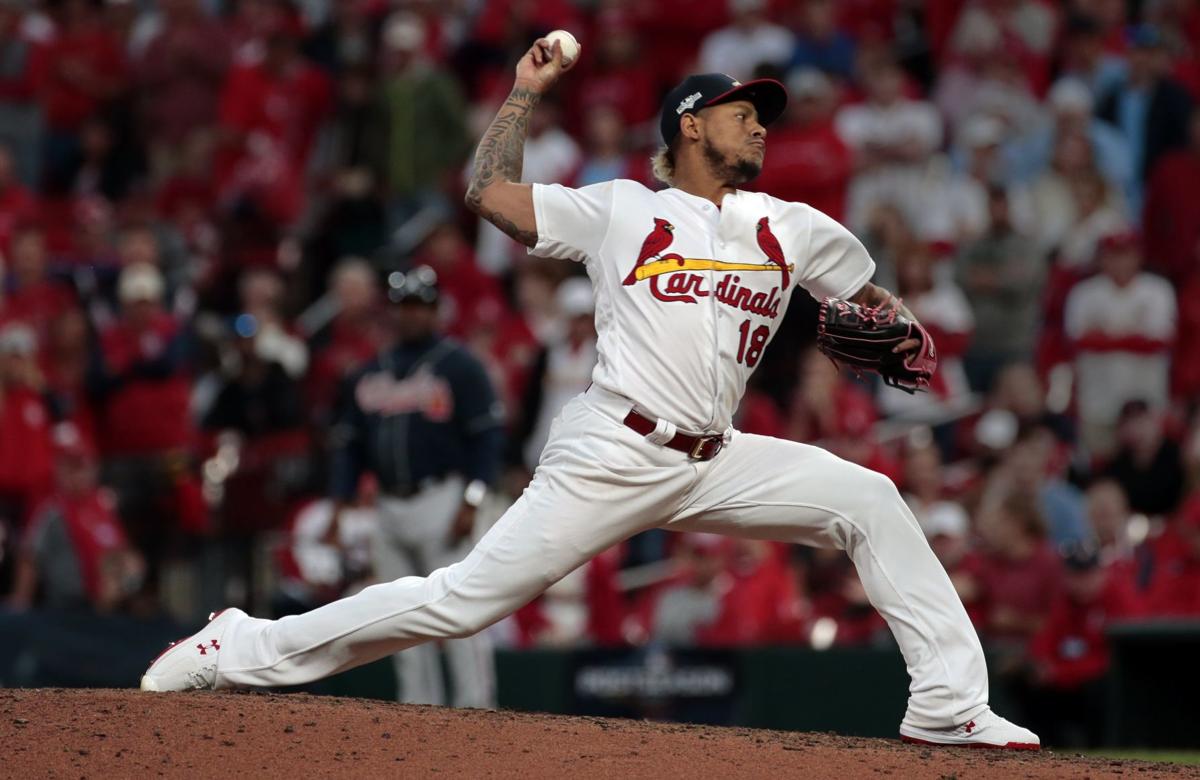 Carlos Martinez pitches in Game 3 of the NLDS against Atlanta. (Post-Dispatch photo by Robert Cohen) 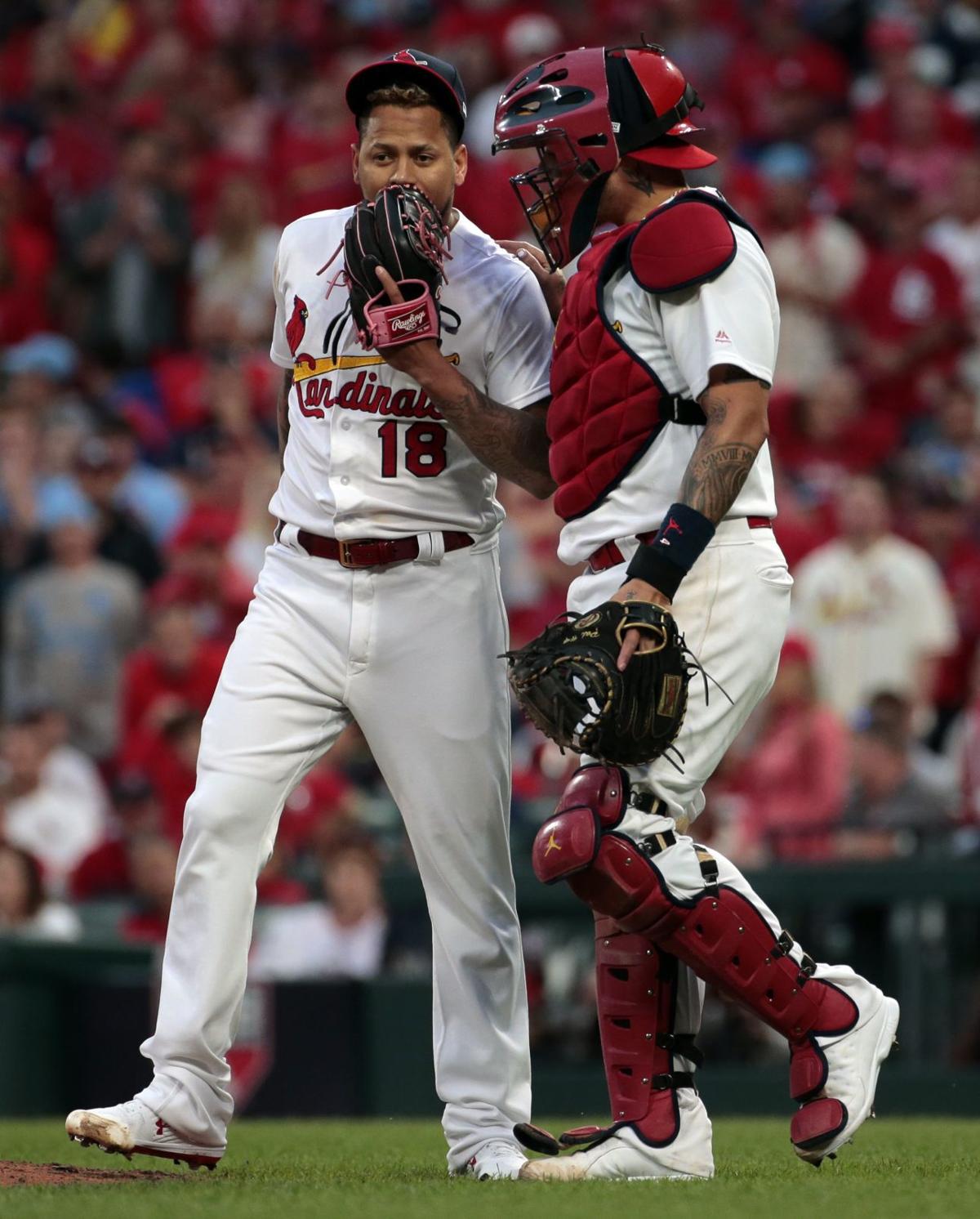 After recasting himself as a reliever this season because recurring shoulder weakness prohibited his ability to pitch deep into games as a starter, Carlos Martinez had a “small” surgical procedure late last week to encourage healing in the joint this winter.

Martinez received an injection of platelet-rich plasma (PRP) into the right shoulder, president of baseball operations John Mozeliak confirmed to the Post-Dispatch on Sunday after first disclosing the treatment on KMOX (1120 AM) during his weekly appearance. Mozeliak called it a “small procedure,” and the Cardinals do not expect recovery to intrude on his offseason or delay his availability for spring training.

The purpose of the PRP is to aid his recovery, not prolong it.

“He should have a pretty normal offseason,” Mozeliak said on KMOX.

An associate of Martinez’s shared photos on social media of the pitcher visiting Dr. James Andrews’ facility in Pensacola, Fla., this past weekend. Martinez underwent a series of exams that are standard following a season — exams that usually include an MRI and even an ultrasound scan of his right shoulder. The results of those exams affirmed earlier looks that the team said did not show any structural issues. The treatment was agreed upon after review of the scans. Martinez received the procedure at Andrews’ facility.

Martinez, 28, has had two seasons shaped by shoulder trouble. In 2018, he had three injuries that ranged from an oblique strain to shoulder soreness. He and the team traced the injuries back to a lingering weakness in his right shoulder. This past spring, he had to stop his throwing program and enter a strengthening program because of similar trouble with the shoulder. Martinez described it as a hesitance to throw at full strength for multiple innings. He was able to throw at maximum effort in the first inning, but as he felt weakness in the shoulder his trepidation would also increase.

He said during spring training that he didn’t have the same issue in short bursts or when being used on consecutive days, as he would as a reliever.

When he returned from injury, Martinez began as a reliever and took over at closer when Jordan Hicks required elbow surgery. Martinez had 24 saves in the role and was the most efficient closer in baseball the second half of the season as the Cardinals surged to a NL Central title. He had difficulty during their National League Division Series, against Atlanta, with six runs allowed in 3 1/3 innings. In the NL Championship Series, the Cardinals never had a lead for him to hold. He retired one of the two batters he faced in that series.

Martinez consistently has said his goal is to be in the rotation and to regain his health and strength so that the Cardinals will consider him for a starting role. The club is open to that and intends to help him get on a regimen this winter that will prepare him for a starter’s workload. The righthander is signed through 2021, with club options for 2022 and 2023.

“In terms of what we want to see happen with Carlos this upcoming year, I think there are going to be many factors that weigh into that, and him being one of them,” Mozeliak said during his radio interview. “What he decides he thinks is best when you look at his career path and where he is physically.”

Cardinals first base coach Stubby Clapp is expected to interview this week with Pittsburgh. The Pirates’ interest in Clapp was first reported by Jon Heyman of MLB Network. The Cardinals prefer to let other teams confirm their interest, but the team does grant permission for coaches to talk with teams about what would be a promotion.

Clapp, the Cardinals’ Class AAA affiliate’s manager in 2018, interviewed for the manager position in Toronto last offseason at the same time he was offered a chance to be on manager Mike Shildt’s big-league staff.

Shildt stumped for bench coach Oliver Marmol to get some consideration as the manager carousel turns this offseason, and pitching coach Mike Maddux said he would be open to pursuing a managerial position if a team had interest.

The New York Mets interviewed former Cardinals outfielder Skip Schumaker for their opening, according to The Athletic. Schumaker has spent the past two years as San Diego’s first-base coach. The Padres also are interviewing candidates for their manager position. Former Mizzou outfielder Jayce Tingler, a rising candidate in Texas’ organization, has received a second interview for San Diego’s opening.

Hochman: From Cardinals' Wong to the playoff MVPs, undersized second basemen are having a moment

I was standing by the Busch Stadium visitors' dugout in July when he walked by. We didn't say anything, but we looked eye-to-eye, and as Jose …

The radical improvement the Cardinals made on defense in 2019 not only helped them contend despite an inconsistent offense but also made a little history as the only club to go from worst to first in errors. That turnaround could be worth its weight in gold.

Carlos Martinez pitches in Game 3 of the NLDS against Atlanta. (Post-Dispatch photo by Robert Cohen)