All-in with Albert: Cardinals count on hitting coach to merge modern tools with tradition to reboot offense
0 comments
Share this
Subscribe for $3 for 3 months
1 of 2 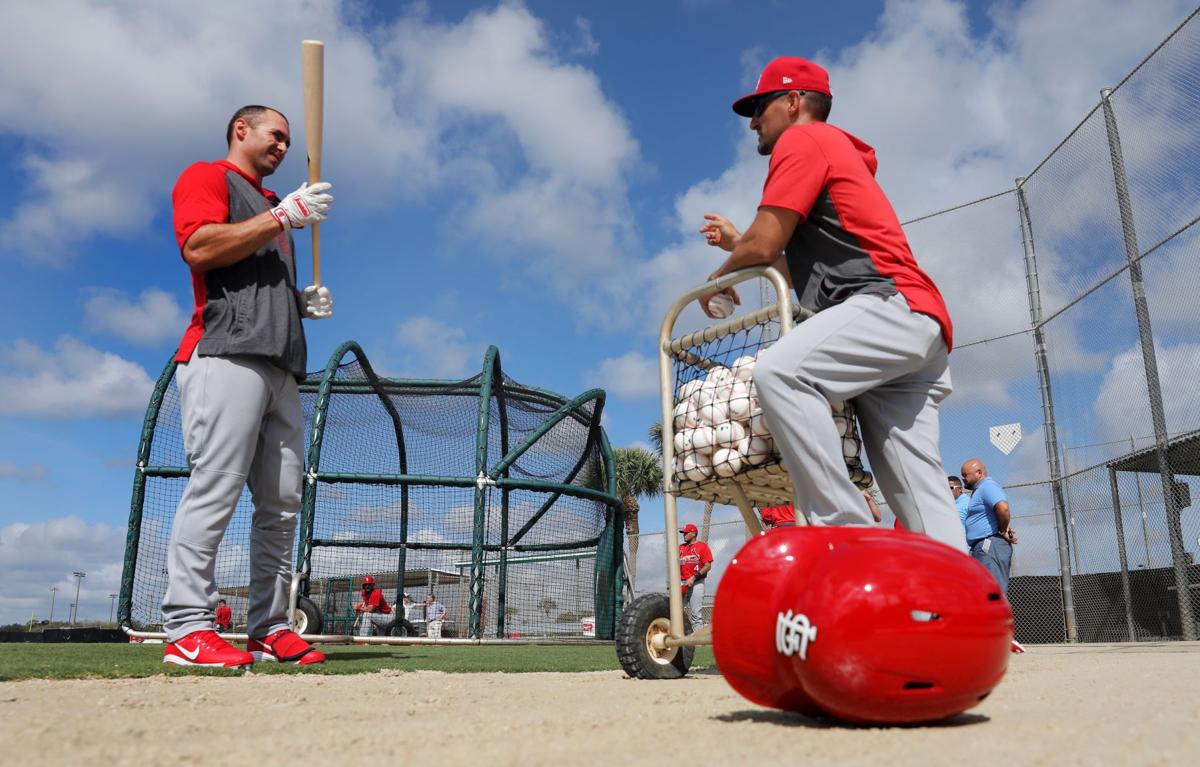 WEST PALM BEACH, Fla. — There were times, in the densest fog of new information and an idling lineup, that shortstop Paul DeJong would plant a cleat in the batter’s box thinking about where his hands should be, how steady his stance was, when he should start his swing — and that was all before he considered what pitch he might face.

The swirl of questions drowned out the one answer he needed most.

As much as defense was the headline emphasis of spring training 2019, the Cardinals’ offense has received heightened focus this year, and they’re even using some of the same lingo. Hitters throughout the lineup regressed last season, and the lingering reminder of the lowest-scoring playoff team was the Cardinals’ historically poor .130 average in the National League Championship Series. To remedy what ailed the lineup, the Cardinals have decided to reestablish their roots, to do what they did for defense, to get back to a traditional style — “I like the word identity,” manager Mike Shildt said — with a modern hard drive. They know who they want to be as an offense, and they know who is at the nexus of getting them there: second-year hitting coach Jeff Albert.

With word and deed, Cardinals officials have committed all-in on Albert. The team did not add a middle-order hitter, trusting on improvement from existing players. Executives have stated they trust Albert wasn’t involved in the Astros’ sign-stealing scheme while with them in 2018. They dismissed two respected, veteran hitting coaches and hired replacements to work closely with Albert. And they have invested in the advanced tech to help Albert succeed in his charge, to catch the Cardinals up. There is a palpable pressure to produce.

“I don’t want to use the word ‘feel.’ I am aware of the pressure,” Albert said during a lengthy interview outside the Cardinals’ clubhouse. “I’m obviously aware of how we performed last year and where our ability-level is, and our overall numbers not being reflective of our capabilities. But I think if I’m feeling pressure or thinking about that then I’m not concentrating enough or focused enough on the players and what they really need.

“I’m aware of the performance and the expectations and the organizational (demands) and that’s great,” he continued. “But I also feel that if we’re going to perform and make progress all of my concentration has to be on the guys in the clubhouse.”

During the Cardinals’ “Ball Talk” sessions, they have spent a lot of time discussing the “identity” of the offense, and drills have been geared to highlight situational hitting. That has been a shift from last year, and so has Albert’s decibel level. Every hitter interviewed for this story described Albert as more vocal, more assertive this spring now that he knows the hitters better and has spent the winter forging those relationships. DeJong said “his seriousness and his conviction gives us confidence that, OK, we’re on the right track.”

The Cardinals were the only playoff team outside the top half in runs scored, and the speed bumps were numerous. From May Day to the end of June, the Cardinals hit .228 with a .308 on-base percentage and a .365 slugging percentage. The team had a .673 OPS, and last season of the 135 batters to qualify for the batting title only five individuals had a lower OPS. The Cardinals, for two months, were less threatening as a group than an everyday player. One symptom was a chronic lack of baserunners. The Cardinals’ leadoff hitters ranked 29th in OBP and last in OPS. As a result 74 hitters had more at-bats with runners in scoring position than Paul Goldschmidt. In a season when he played more than 104 games, the Cardinals’ No. 3 hitter had a career-low 147 plate appearances with runners in scoring position.

Their home ballpark further muzzled production as the Cardinals had the sixth-lowest slugging percentage at home (.406). The five teams worse than them were the five lowest-scoring teams.

The Cardinals had to have an elite defense to prevent the runs they could not score, and it was there as they diagnosed their ills that they found a salve. The defense improved when they drilled the fundamentals and outfitted them with data, such as more aggressive shifting. The offense could do the same: Get back to the classics, augmented with cutting-edge approach.

“That’s what the conversation is: Hey, we’re the Cardinals, we’ve had a lot of success, there’s a certain tradition, there are core principles, and we’re really good at them,” Albert said. “We’re trying to connect it to the character of the team. … There is also new technology, this new information, and how do we integrate that in a smart way. That’s a real challenge. Just managing the change and then staying true to the identity at the same time, that’s a real thing. But that’s a valuable thing. Baseball is changing at a crazy pace.”

The Cardinals have provided Albert more of what he wants from tech. The batting cages in Jupiter, Florida, have been upgraded with enough gear that Albert had hitters visit him this season to become more familiar with it. The Cardinals have gone from zero Edgertronic high-speed cameras to 15. They’ve added Rapsodo hardware, motion-sensing K-vests, and some other gizmos that Albert would only describe as “tech stuff.” This season, every minor-league hitter will have a personal Blast Baseball swing analyzer to attach to his bat. Asked on a scale of 1 to 10, with one being a batting tee and 10 being tomorrow’s tech, how far the Cardinals have come in the past 12 months, an official said “from 3 to an 8.”

What Albert has learned what hitters want is individualized.

He gave the example of how “slugging” means something different to each hitter. Goldschmidt gets there by homers and doubles, Kolten Wong by singles and doubles. What matters is the damage they do, measured by total bases. Launch ain’t for everybody. Hitters also digest data differently. Last year, Albert arrived with a general approach and “template.” This year, there are baseline goals — “controlling the strike zone and solid contact to the outfield, and it sounds overly simple,” he said — but how each hitter works to get there is individualized. He’s learned who they are. The team is steered toward being better at the old-school notion of situational hitting, but new-school tech is there to help accelerate. One is a hitting theory the Cardinals are stressing, the other offers hitting tools. They can coexist.

“He’s created plans with everybody, checklists with everybody, and you can tie your confidence to that,” Wong said. “It’s almost like a car. You’re checking the oil, the alignment. I’m checking my top hand in my swing, my bottom hand, my different drills, and I know my swing is in the right place. I do my checklist, and now we go compete.”

In other words, as DeJong stepped to the plate Sunday against Houston he completed his checklist during morning drills and didn’t wonder where his hands should be or how his stance was. He knew who he was. Before the game he checked the advanced scouting report for what the pitcher was likely to throw, and when he got in the box …

He doubled and homered in his first two at-bats, and in the third he flew out on the 14th-pitch of an at-bat. Tyler O’Neill also homered — and walked twice. After the game, Shildt used those hitters as examples of how the Cardinals’ offense must “beat you in a bunch of different ways.” To do so the players and the coaches must have “clarity (on) this is what we do, this is how we do it, and this is who we are.”

“I think being that much more familiar helps both ways,” Albert said. “They know how I think, and I know how of each of them thinks a little bit more. I like the players’ mentality, their engagement.”

Having talked about that for almost an hour, Albert paused.

They can know who they are, what they do well, and how they score.

They must show it, too.

“I like what we’re doing a lot right now, yeah,” Albert concluded.

Florida declares a public health emergency as spring games continue, and the Cardinals are scheduled to play in June a two-game series in London, where officials have said a widespread outbreak of the disease is 'likely.'

Lefty Miller undergoes series of tests as Cardinals, veteran try to get a grip on 'frustrating' issue

'We're looking for answers,' Miller says a day after cutting his warmup short because he didn't have the 'right' feel for his pitches.

On his way to attend a basketball game -- his mom, Kim Mulkey, coaches the NCAA champs Baylor Bears -- minor-leaguer made the right call and answered his phone. He was on a plane to Florida within hours.