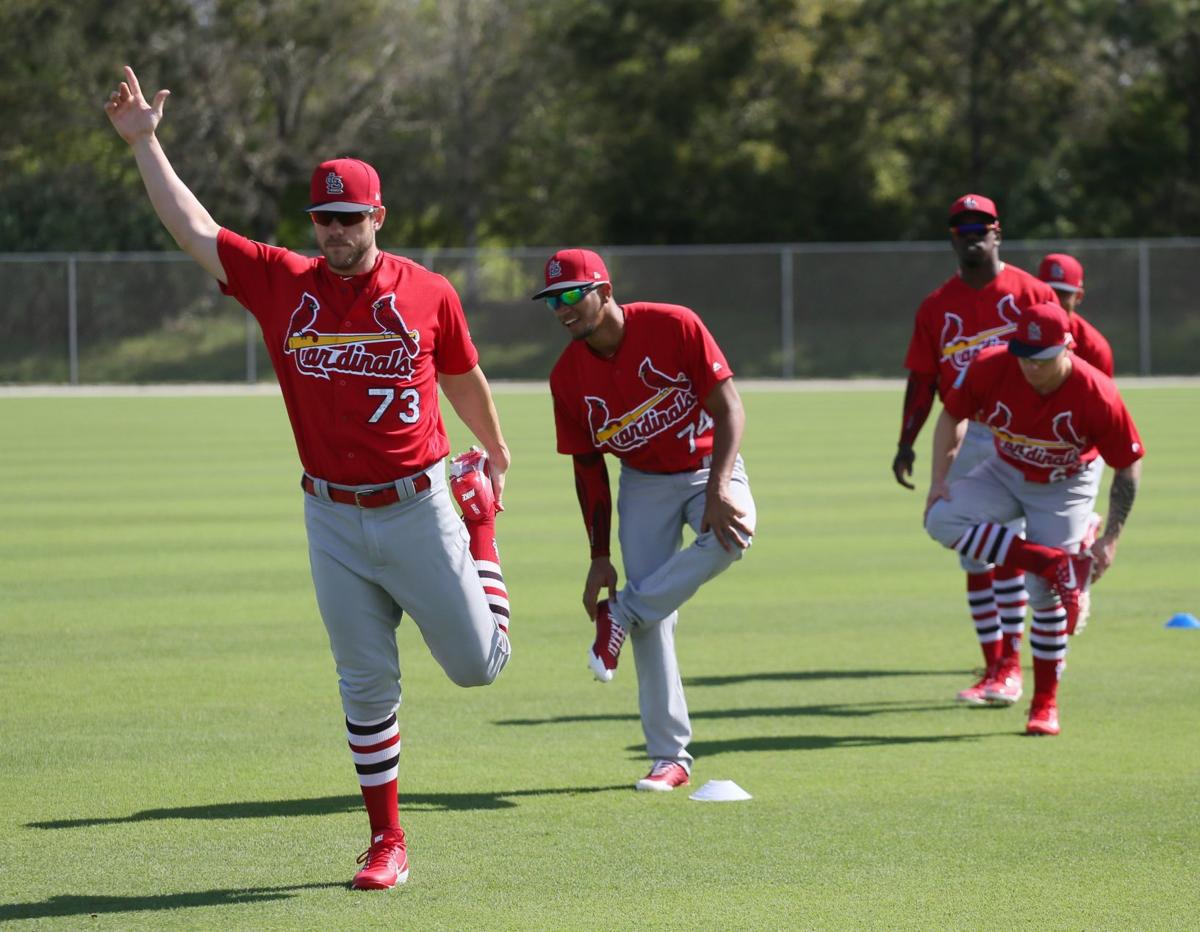 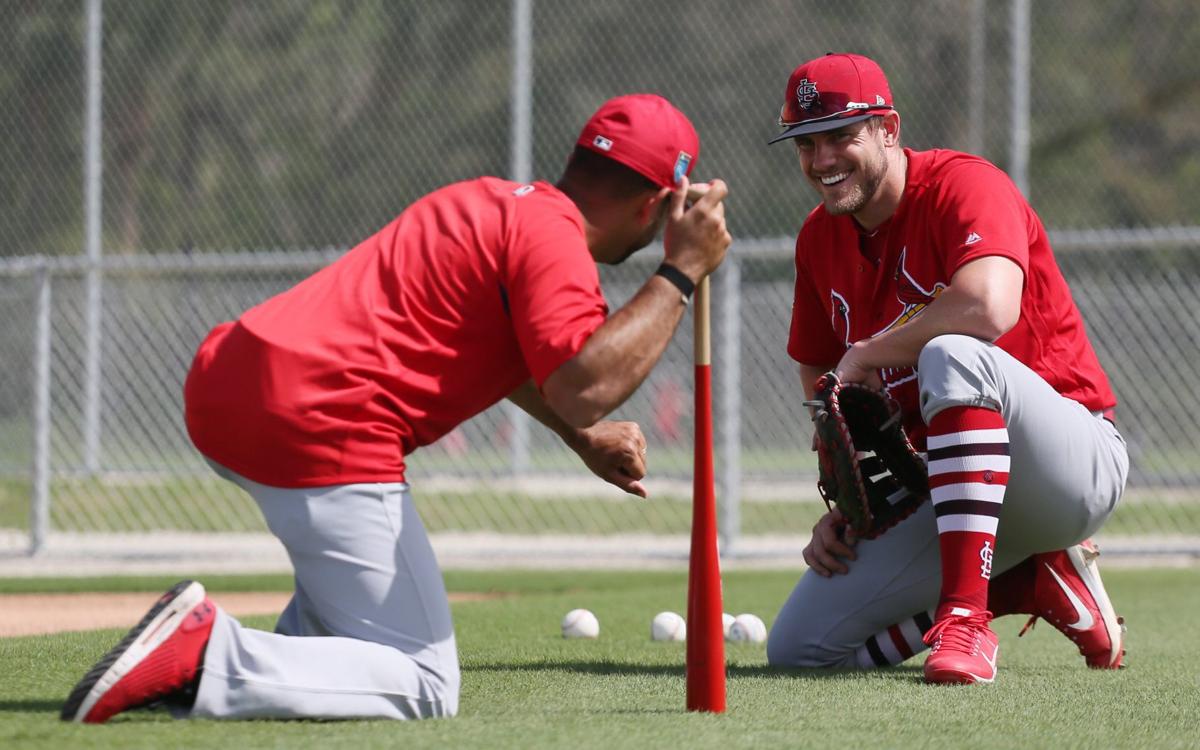 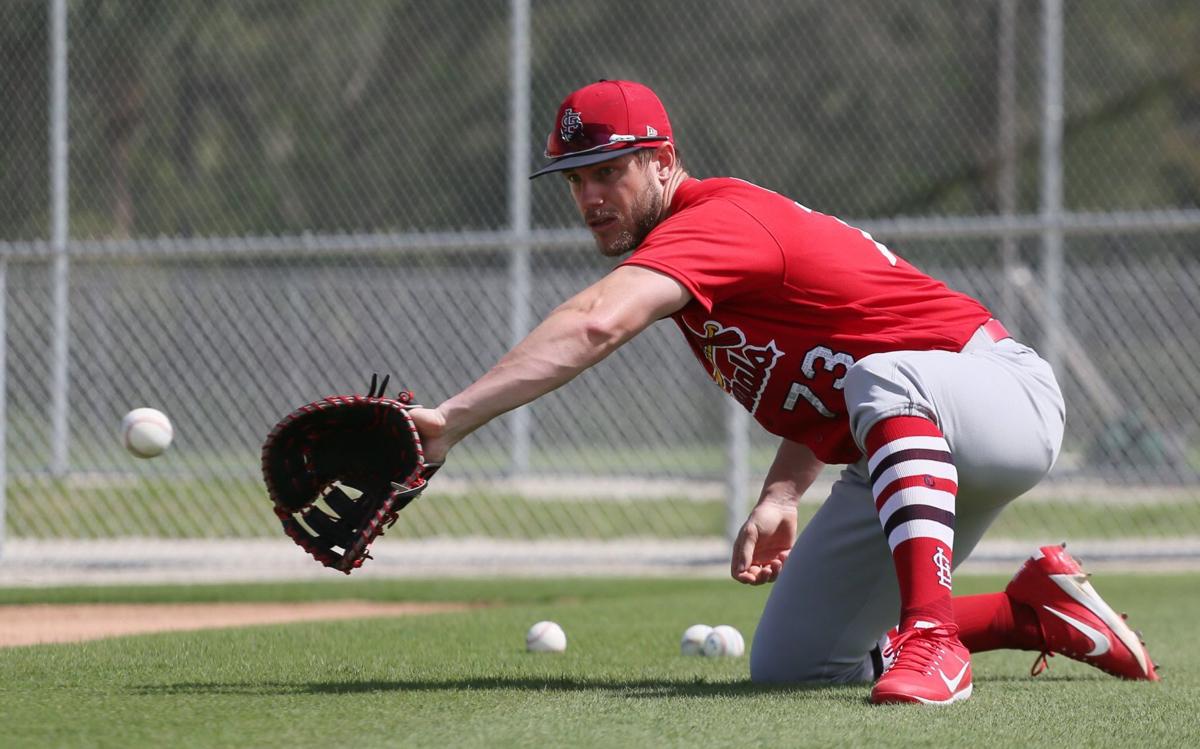 JUPITER, Fla. • One step shy of the majors, one phone call away from a dream, Patrick Wisdom watched. He was rooted in the Class AAA clubhouse this past year, as the Cardinals mined Memphis’ roster for help, and all he did was keep slugging.

A speedster leapfrogged him from Class AA. A switch-hitter got a callup. Outfielders came down, and shot back up. A shortstop here, a basher there, another center fielder, and oh so many relievers. Still, Wisdom remained. His first full season at Triple-A included a breakout 31 homers, a resounding .507 slugging percentage, a reputation as a superb fielder, and a championship ring. Yet, gnawing at those lofty achievements was one thing 2017 didn’t have.

In took time, and a recent conversation with a former teammate, but Wisdom understood that just because his season was missing something doesn’t mean he was.

“Thinking, well, whatever I did wasn’t good enough so I’ve got to change myself — that’s not necessarily the answer,” Wisdom said. “You can’t flip the coin completely. I can’t go out there and become a slap hitter or a switch-hitter because that’s what made it. That’s just not my game. That’s not who I’ve become. You can’t start searching for the player or the model that they’re trying to fit or find. You have to stay true to yourself and get better at that.”

As the Cardinals open their Grapefruit League schedule Friday against their Roger Dean Stadium housemates, the Miami Marlins, few players have as many possible outcomes as Wisdom. Some of his teammates are playing to get ready for the season, others are out to establish their roles, and a few are trying to extend their careers. Young players are playing to position themselves on the depth chart, for future needs, or even within the system.

Wisdom is doing almost all of those things — and something else: He’s auditioning for all 30 teams.

“You’re trying to create your own major-league opportunity, whether it’s with the team that you’re with or 29 other teams that exist,” said John Mozeliak, the Cardinals’ president of baseball operations. “Look, he’s on the doorstep. He’s falling into that line I use a lot: You have nothing left to prove at Triple-A.”

Wisdom, 26, is in his fifth big-league spring training, and this will be the sixth spring he suits up for a Grapefruit League game. When he first did he wore a number in the 90s and a jersey that didn’t have his name on the back. He inched up into the 80s and had a locker nearby James Ramsey, Randal Grichuk, and Stephen Piscotty — all outfielders who have since been traded. This year, he made the leap to another side of the clubhouse, and got his highest number yet.

Watch the series of Post-Dispatch videos from Cardinals spring training

Watch here for a collection of our Spring Training videos each day.

Yet, the numerical and physical move are secondary to the transactional one he didn’t make. The Cardinals did not place him on the 40-man roster, left him exposed for the Rule 5. This was strategic for the Cardinals, if not ideal for Wisdom. The Cardinals had a 40-man traffic jam last fall, and rather than add Wisdom for a September callup and then certainly lose him when they removed him in November, the Cardinals bet he would not get drafted in the Rule 5. He wasn’t selected for a second time, and the Cardinals struck roster bingo: keeping a needed corner piece without having to give up a roster spot.

With limited prospects at third, Wisdom is in line to be the Cardinals’ starter at third if Jedd Gyorko misses significant time. Wisdom joked that he wished his “paygrade” allowed him to ask about his standing with the team. Their moves spoke to him. “Not having the September callup was a big fire in the belly,” he said.

This past year was the season long expected from Wisdom, though slow to arrive. He hit 15 homers in his first full pro season, including 13 at Low-A Peoria. He hit 14 each of the next two seasons, stalling at Class AA because the power and contact rate didn’t consistently connect. In 2016, Wisdom was demoted to the Cardinals’ lowest level so that he could spend time in Jupiter, Fla., revamping his swing. He worked so many hours in the cage his hands were raw, and blood seeped through his fingers when he gripped the bat. But he got his swing.

Along with that work and an offseason assist the past two winters in Seattle, Wisdom blossomed with 31 homers and 57 extra-base hits in 2017. Eight players in Class AAA hit at least 30 home runs. Only two aren’t on their team’s roster. Of the six who hit at least 30 in the Pacific Coast League, five are on the 40-man roster and two are in the Cardinals system. Tyler O'Neill is on the 40-man. Wisdom the one who isn't.

Wisdom’s strikeout rate remains a hitch. At Memphis, he struck out 149 times in 127 games (456 at-bats). The Cardinals had high K-rates in the majors last season and were reluctant to shove another into the lineup. The roster makeup this year is more accommodating.

That’s where spring comes in.

With Gyorko the fixture at third and Matt Carpenter sidelined by back soreness to open exhibition play, there will be ample at-bats for Wisdom. He’s a steady fielder at third, and he’s proven he’s also deft at first. Wisdom tied for the team lead with 25 games played in spring last year, in part because of this defensive ability, and he capitalized with three homers and five walks against seven strikeouts. The only player who matched his games and surpassed his home runs in Florida was Jose Martinez. He made the opening day roster.

Last spring gave Wisdom a stage for his swing, and realization of what else he needed.

“Look at the guys in there — Carp, Gyorko, Yadi (Molina), all the guys, Dexter (Fowler) — they have this mental separation from everybody else,” Wisdom said. “They understand what they’re doing. They’re confident in themselves and in their abilities. They’re not worried about what other people are doing or trying to compare. They’re going to do what they do.”

That was part of the conversation Wisdom recently had with Ramsey.

It can be tempting to audit all the promotions and cross-reference the additions to the 40-man roster for some larger truth about what it takes, but Ramsey and Wisdom discussed how doing so doesn’t open that door. Wisdom isn’t going to run like Magneuris Sierra did to get his promotion, or handle three outfield spots like Harrison Bader did for his. Whatever got Martinez on the opening day roster was Martinez doing what he does best, not mimicking Wisdom.

“I guess in the back of my head that’s kind of where I am right now,” Wisdom said. “This is a unique spring. There are other avenues to the big leagues. It could be with another team. … But it’s not being someone else. I need to be the best version of myself.”

Goold: In menagerie of nicknames, Carlos Martinez has earned 'Bull'

Two photos taped to Martinez's lock -- and a long-ago nickname -- are a reminder that the budding ace has 'graduated.'

Photos: Cards speed toward spring games with workout on Wednesday

Notebook: Pirates trade for OF Dickerson

Pirates trade for OF Dickerson

JUPITER, Fla. • The Cardinals’ bullpen this year likely will be comprised of seven relievers at the start of the season but could have eight a…

Hochman: 20 springs ago, McGwire and the Cardinals had Jupiter buzzing