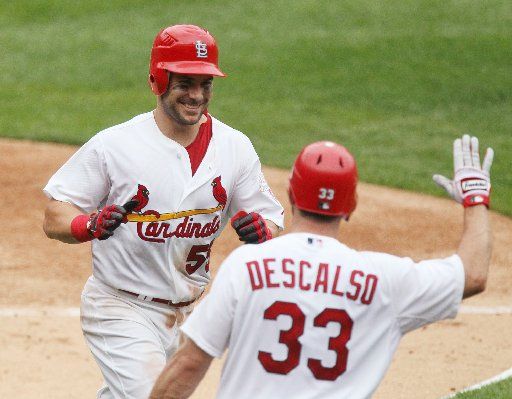 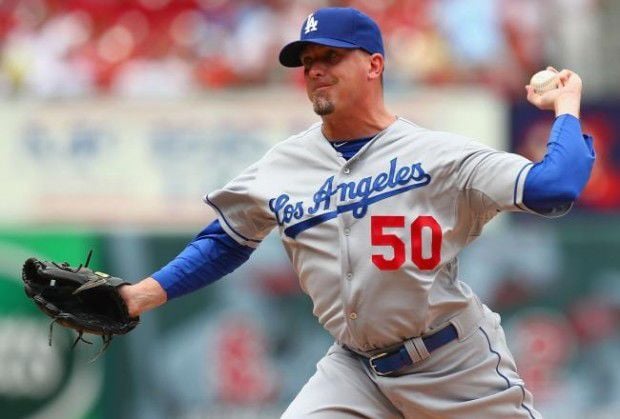 Randy Choate delievers a pitch for the Los Angeles Dodgers in a July game against the Cardinals at Busch Stadium. (Getty Images/Dilip Vishwanat photo) 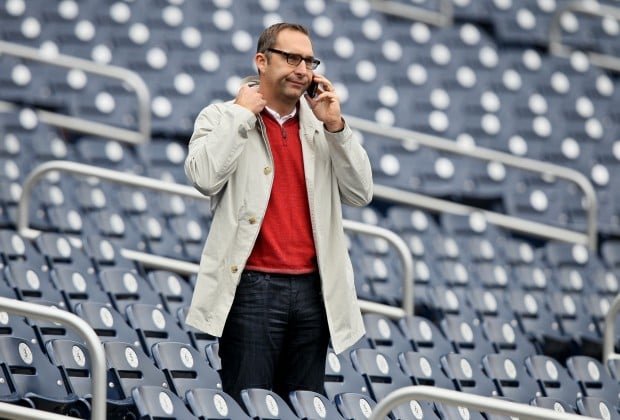 The St. Louis Cardinals GM John Mozeliak talks on the phone during as the Cardinals take the field for practice at Nationals Park in Washington, D.C. on Tuesday, Oct. 9, 2012. The Cardinals and the Washington Nationals are tied 1-1 in the National League Division Series. Photo By David Carson, dcarson@post-dispatch.com

NASHVILLE, Tenn. • If the Cardinals had not signed catcher Yadier Molina to a five-year extension last spring, it is possible they would have spent these winter meetings a lot like last year’s – consumed by a single, franchise-defining series of negotiations with a free agent while fending off a club with a bigger television deal who wasn’t afraid to use it.

Instead, with signature players and almost every starter in place, the Cardinals had a different word to describe this year’s four days spent sealed in the Gaylord Opryland Hotel with 29 other teams and scores of agents.

They found it … busier.

Unlike last December, when the Cardinals spent the winter meetings locked in discussions with three-time MVP Albert Pujols, the club came to Nashville with specific needs and some self-imposed urgency. Mozeliak said the bulk of text messages and phone calls dwarfed last year’s action because his front office team had time to explore options and investigate markets because they weren’t big-game hunting. They weren’t stuck in the staring contests created for the headliners like Josh Hamilton and Zack Greinke, and though they made only one deal the potential for others was mapped.

“When you’re trying to address broader needs it’s a wider swath that you lay out there,” Mozeliak said as he left Nashville for St. Louis on Thursday morning. “When you’re in an environment that we are here and you have everybody under one roof, it’s a great opportunity to chase that. … Obviously we laid the groundwork to reach some of the things we need to. As we look at the next few weeks leading up to Christmas we certainly feel we have a good picture about what’s going on.”

The lone move made in Nashville is expected to become official today when lefty Randy Choate visits St. Louis for a physical that will finalize his three-year, $7.5-million deal with the Cardinals. Choate’s deal will pay him $1.5 million in 2013 and $3 million each in the next two years, The Post-Dispatch confirmed. The other lefty who agreed to terms Wednesday, Sean Burnett, landed a deal from the Angels that guarantees $8 million over two years and could reach $13 million with its vesting option.

The Cardinals left discussions with Burnett after landing Choate, whom the team identified as the better lefty specialist on the market. He held lefthanded batters to a .158 average with a .218 slugging percentage in 2012.

The club has reserved specific comments until the deal is official.

“I think we will have accomplished that one (need),” Mozeliak said.

The one deal done in Nashville was surrounded by deals discussed that could lead to future moves. The Cardinals did measure the market for veteran Skip Schumaker, a utility fielder who saw a precipitous drop in playing time at the end of the season. Schumaker is signed through 2013 with a salary of $1.5 million, a reasonable deal considering the rising cost for complementary and part-time players this season.

The Los Angeles Dodgers engaged the Cardinals in discussion about Schumaker, multiple sources confirmed. The Dodgers could use Schumaker as a backup at second base and center field, and it would reunite the lefthanded-hitting fielder with hitting coach Mark McGwire, a longtime friend and instructor. The Minnesota Twins have traded two outfielders in the past week and they turned some consideration toward Schumaker, according to a source. The Cincinnati Reds also could be interested in Schumaker.

The Cardinals agreed to check on other options for Schumaker, whom they still view as an important part of the clubhouse culture even if they cannot commit to his playing time.

Schumaker “is a name we’ve had out there for a little bit,” Mozeliak said. “We’ve tried to optimize the type of return we might get for him. We’ve left it fairly open. If we can get major-league help, we would definitely consider that. If we can’t find it we will look for someone who can fit into our minor-league system.”

At the same time, the Cardinals are looking to add to their bench. They were linked to veteran Scott Hairston, a righthanded batter who slugged .550 against lefthanded pitchers last summer for the New York Mets. That market budged Wednesday with Reed Johnson’s reported return to Atlanta. The Cardinals’ target is a righthanded bat who will be used mostly as a pinch-hitter late in games. Mozeliak acknowledged that the addition may be more likely in January after players have exhausted their searches for more playing time.

Giving that market time to develop is possible because the Cardinals are fixated on adding a bat, not a specific position.

“I think it’s something that we talk a lot about internally – when you’re trying to sell that as 250 at-bats? Is it 350 at-bats?” Mozeliak said of the open role. “I think a lot of it depends on the health of our club. There is going to be some room that it might be less (at-bats) if we’re completely healthy, and it might be a little more robust if people go down. The key thing for us is to focus on someone who understands how to come off the bench and hit late in the game. That’s ideal.”

The annual winter meetings concluded Thursday with the Rule 5 draft. The Cardinals passed on the major-league side, but selected two minor-league players, including Breese, Ill., native Jay Voss, a lefty.

While sequestered in Opryland, one area of the market the Cardinals kept a pulse on was the middle infield. The team continues to weigh its options when it comes to adding insurance or more to the middle infield. Discussions held this week in Nashville may not yield action, however, until during the season or, as Mozeliak said, a year from now when they could come to the winter meetings with shortstop on their wish list.

“There is still some work to be done,” Mozeliak said. “Remain patient. Find that right fit.”

Looking back at the top St. Louis sports moments in 2012

Bryan Burwell and Derrick Goold revisit the Cardinals' comeback win over the Washington Nationals in Game 5 of the NLDS.

Getting a good taste of postseason play leaves him hungry for more.

Former Cards' skipper spent much of his time at winter meetings talking to current managers about issues they had.

Club had to give 37-year-old Randy Choate a third guaranteed year to win a multi-team auction.

Bernie Miklasz writes: We'll never forget the hurt feelings that set in when Pujols headed to Anaheim. But there will be a time for forgiveness.

Reed Johnson, the top pinch hitter in the National League last season, rejoined the Atlanta Braves on Thursday with a one-year contract that i…

Randy Choate delievers a pitch for the Los Angeles Dodgers in a July game against the Cardinals at Busch Stadium. (Getty Images/Dilip Vishwanat photo)

The St. Louis Cardinals GM John Mozeliak talks on the phone during as the Cardinals take the field for practice at Nationals Park in Washington, D.C. on Tuesday, Oct. 9, 2012. The Cardinals and the Washington Nationals are tied 1-1 in the National League Division Series. Photo By David Carson, dcarson@post-dispatch.com