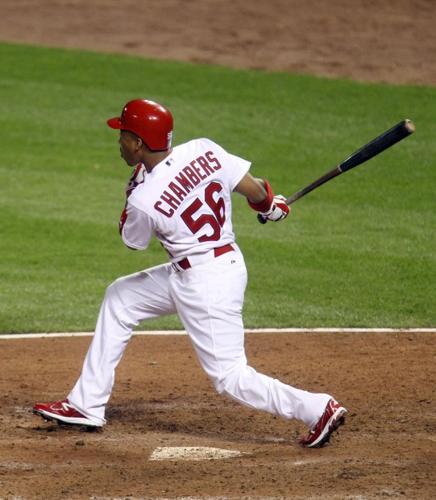 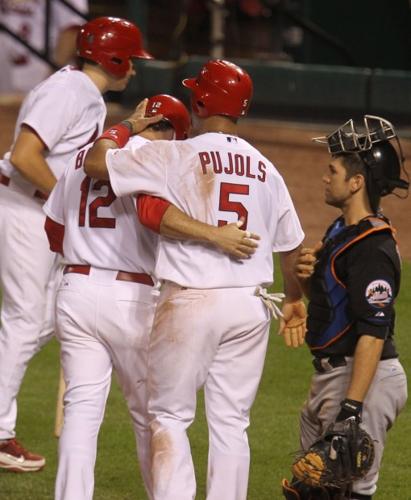 9/20/11 Monday St. Louis --- Cardinals Lance Berkman and Albert Pujols congratulate each other after scoring in the seventh inning on a triple by pinch hitter Adron Chambers that cleared the bases. J.B. Forbes jforbes@post-dispatch.com 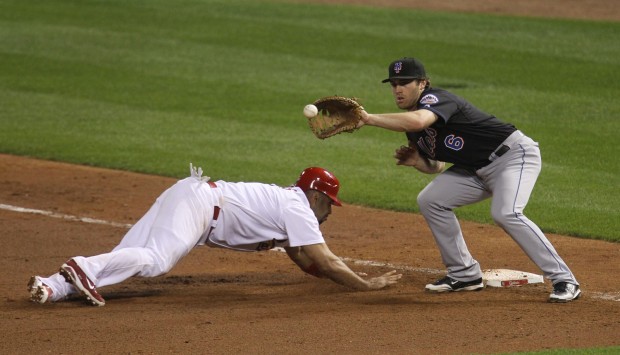 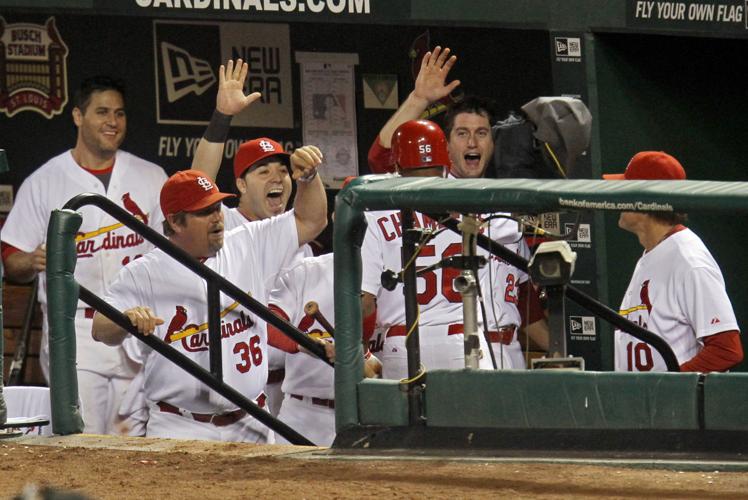 Cardinals pinch-hitter Adron Chambers is greeted in the dugout after hitting a bases-loaded triple in the seventh inning. (J.B. Forbes / jforbes@post-dispatch.com) 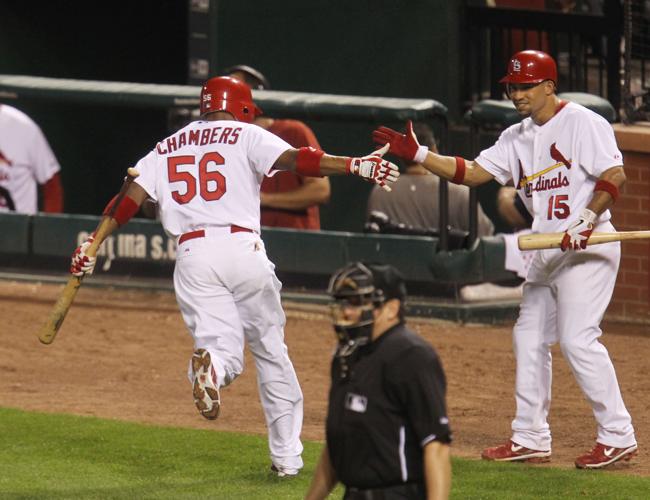 9/20/11 Monday St. Louis --- Cards pinch hitter Adron Chambers is greeted by Rafael Furcal after scoring in the seventh inning on a hit by Nick Punto. Chambers cleared the bases with a triple. J.B. Forbes jforbes@post-dispatch.com

As they mounted their frantic charge toward a potential playoff berth, the Cardinals played almost exclusively from ahead in rolling up 10 wins in 12 games. In only one of those victories did they even trail.

But on Tuesday night, they were obliged to come from behind. Not once, but twice.

One comeback erased an early 4-0 New York Mets lead as the Cardinals caught up at 5-5. The second, a six-run burst in the seventh inning, highlighted by pinch-hitter Ryan Theriot's two-out, two-run double and rookie pinch-hitter Adron Chambers' two-out, three-run triple, rubbed out a 6-5 Mets edge and enabled the Cardinals more or less to run in place in the wild-card derby.

Their 11-6 triumph before a paid house of 37,746 at Busch Stadium kept the Cardinals 2½ games behind Atlanta with eight games remaining for the Cardinals and seven for the Braves.

"(Eight) games left," said Cardinals first baseman Albert Pujols. "All you have to do is go out there and play.

With rosters expanded in September, Cardinals manager Tony La Russa had a field day in the seventh, twice pinch-hitting for a pinch-hitter. The second pinch-hitters were Theriot and Chambers.

The streaking Pujols, who had his second four-hit day in five games, started the rally with a two-out single, followed by Lance Berkman, who did the same. With David Freese at bat, Berkman tiptoed to second as La Russa tried to steal a run with a potential double steal, but Mets catcher Josh Thole held the ball and Pujols wisely stayed at third. Freese worked a walk to load the bases.

Yadier Molina was walked intentionally to re-load the bases. La Russa pulled Skip Schumaker, nothing for nine against Byrdak. Righthanded-hitting Tony Cruz was dispatched to hit, but not really.

When Collins went to righthander D.J. Carrasco, La Russa answered with the lefthanded-batting Chambers, who won a game for the Cardinals last week in Philadelphia with his first major-league hit.

His second hit was much more productive, clearing the bases, and Chambers completed his triumphant tour, scoring on a single by Nick Punto, who also had not started the game.

Chambers is "a very confident guy," La Russa said. "When he gets experience, he's got a chance to be an impactful major league player."

So, the Cardinals got six RBIs in the seventh from players who didn't come into the game until at least the sixth.

"It was a beautiful sight to behold," said La Russa. "It surely didn't look like it was going in that direction.

"But once a thing starts rolling sometimes, it's tough to (put) a cork on it."

"It's very rare with two outs against a good major league bullpen, to get (six runs). Weird baseball."

La Russa didn't think he ever had used four pinch-hitters in two spots in the same inning and was certain he hadn't received so much production from that deployment.

La Russa is on record as saying the last month of the season shouldn't be played any different from the first five months, and he reiterated that Tuesday. But, for at least this one night, he was in favor of having 10 extra players.

"It's the rules, so you play the rules," La Russa said.

Theriot has lost his starting job at shortstop to Rafael Furcal and plays only occasionally at second base. But he has had four RBIs as a pinch-hitter -- on two hits.

La Russa said, "This has been a real character test (for Theriot) and he's passing it."

Theriot, at least, has been used in "game" situations, though. "It's definitely a different role than I'm used to but it's a fun one," he said. "Coming out of this has made me a better ballplayer, for sure.

"It's given me a chance to sit back and look at my swing and see where you kind of missed some stuff through the year."

Cardinals starter Edwin Jackson hadn't allowed more than three earned runs in any of his last eight starts. He had been the ultimate .500 pitcher for his career, going 30-30 on the road and 30-30 at home.

He remained at 60-60 for his career, leaving the game tied 5-5 after five innings.

"It was a real struggle for him," La Russa said.

But Jackson did help himself with his legs in the third as the Cardinals scored three runs to slice the lead to 4-3 against Mets starter Mike Pelfrey.

First, Jackson beat out a grounder to third. Not many pitchers can score on a double to left but Jackson easily came home on a two-base hit by Furcal, who extended his hitting streak to eight games.

Pelfrey, an .093 hitter, doubled off the glove of fast retreating left fielder Allen Craig for a Mets run in the fifth.

But Craig singled to start a two-run burst by the Cardinals that tied the score at 5-5 in the home fifth when Berkman singled home two runs.

Righthander Kyle McClellan had a scoreless sixth, but the seventh was much more of an adventure, accentuated by his failure to field a popped bunt by Thole. McClellan also walked three men in the inning, forcing in the go-ahead run on a four-pitch pass to Angel Pagan.

The first walk was to Nick Evans and then Thole tried to sacrifice. As both catcher Molina and McClellan moved for the ball, McClellan tried for a diving catch and then, while on the ground, threw wide of first.

"How are you going to stop a guy from trying as hard as he can?" said La Russa. "I just would have preferred we get an out.

"We don't practice the diving play in spring training."

McClellan left after his third walk in the inning for Octavio Dotel, who caught David Wright looking at a slider for strike three.

"That was a big-league play," said La Russa.

Dotel, the winning pitcher, said, "You can't give up in any situation. Even if we're losing by three, four runs, you can't give up because of the offense we've got ... they can do anything."

Dotel, who said he counted Wright as a friend, pulled a little trick on the Mets' third baseman.

"I don't think he expected back-to-back sliders off me. I kind of surprised him," said Dotel.

Can the Cardinals do it?

Most fans had given the team up for dead but now, 2 1/2 games behind Atlanta, the playoffs are at least a possibility. Ask Joe Strauss about t…

Has Cardinals' tradeoff at shortstop worked?

Theriot's key hit Tuesday was a small example of how he personified Cards' swap of defense for more offense.

Holliday is likely to miss series

9/20/11 Monday St. Louis --- Cardinals Lance Berkman and Albert Pujols congratulate each other after scoring in the seventh inning on a triple by pinch hitter Adron Chambers that cleared the bases. J.B. Forbes jforbes@post-dispatch.com

Cardinals pinch-hitter Adron Chambers is greeted in the dugout after hitting a bases-loaded triple in the seventh inning. (J.B. Forbes / jforbes@post-dispatch.com)

9/20/11 Monday St. Louis --- Cards pinch hitter Adron Chambers is greeted by Rafael Furcal after scoring in the seventh inning on a hit by Nick Punto. Chambers cleared the bases with a triple. J.B. Forbes jforbes@post-dispatch.com